Accessibility links
Puerto Rico's Weak Infrastructure Creates Big Challenges For Recovery : The Two-Way Even before Maria, the island suffered from frequent power outages and crippling debt. Now organizations must figure out how to deliver relief to a place that may not have electricity for months. 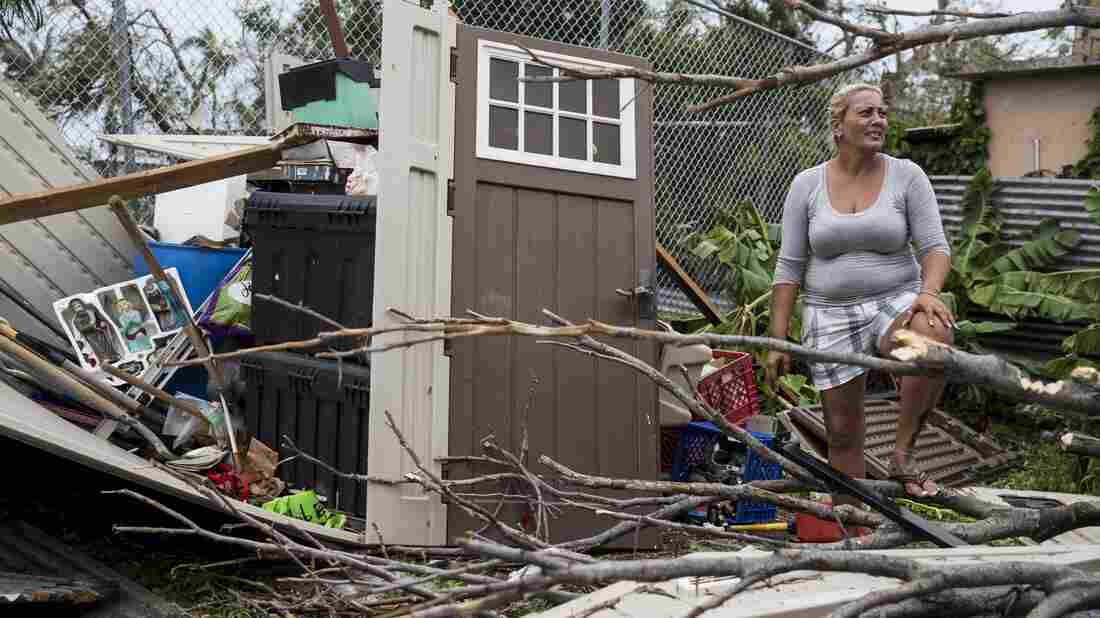 A resident faces the damage to her suburban San Juan property from Hurricane Maria. The lack of electricity and other key elements of infrastructure make recovery that much harder. Alex Wroblewski/Getty Images hide caption 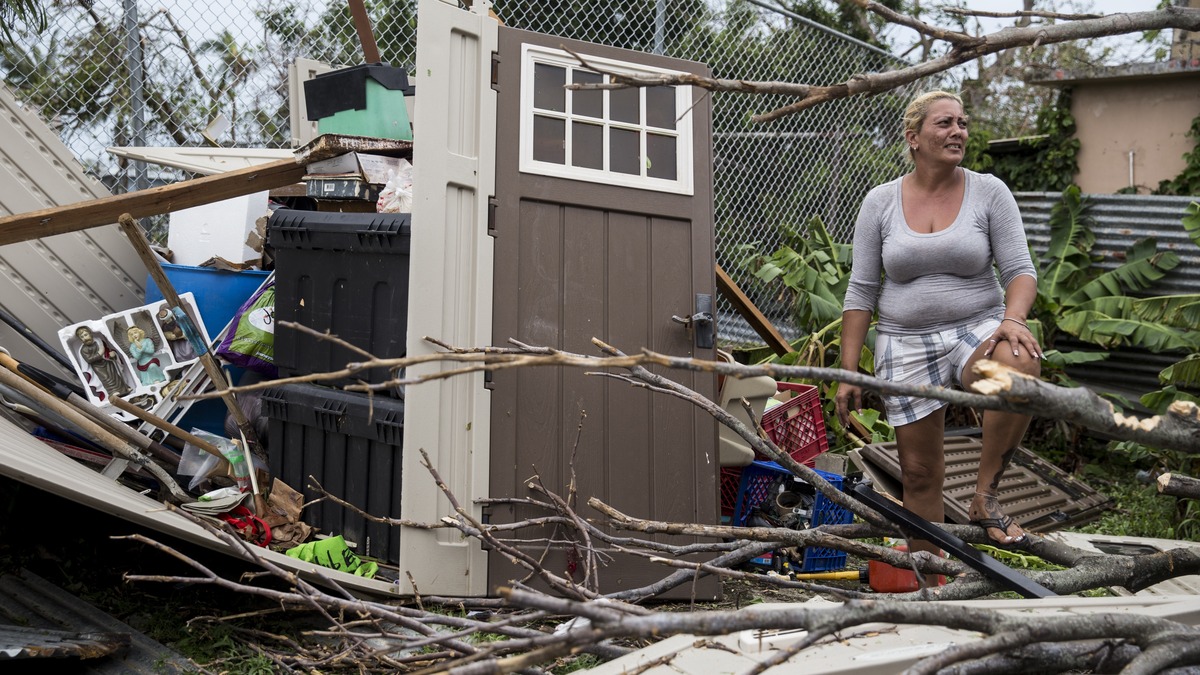 A resident faces the damage to her suburban San Juan property from Hurricane Maria. The lack of electricity and other key elements of infrastructure make recovery that much harder.

Well before this year's series of historically powerful hurricanes, Puerto Rico already had a notoriously fickle power supply and crushing debt — the power authority effectively declared bankruptcy in July. Power outages were routine, even in cities.

Then came Hurricane Maria, knocking out the entire power grid and more than 95 percent of the cellphone system on an island of more than 3 million people.

And Puerto Rico's weak infrastructure will make it difficult to provide the aid that it desperately needs.

"Private and public infrastructure is just down," William Villafane, an adviser and chief of staff to the governor of Puerto Rico, told NPR on Thursday. "We are without power, without water service. No hospital has power service. Our streets are all — you just can't go through. When you go through and you have to literally take out the trees that are on the streets — it's the worst hurricane ever."

Broke And Barred From Bankruptcy, Puerto Rico Seeks Outside Cash

When you think infrastructure, you might think of bridges, pipelines and fiber-optic networks. But some of the problems in Puerto Rico at the moment are more basic — and they have a way of piling up. 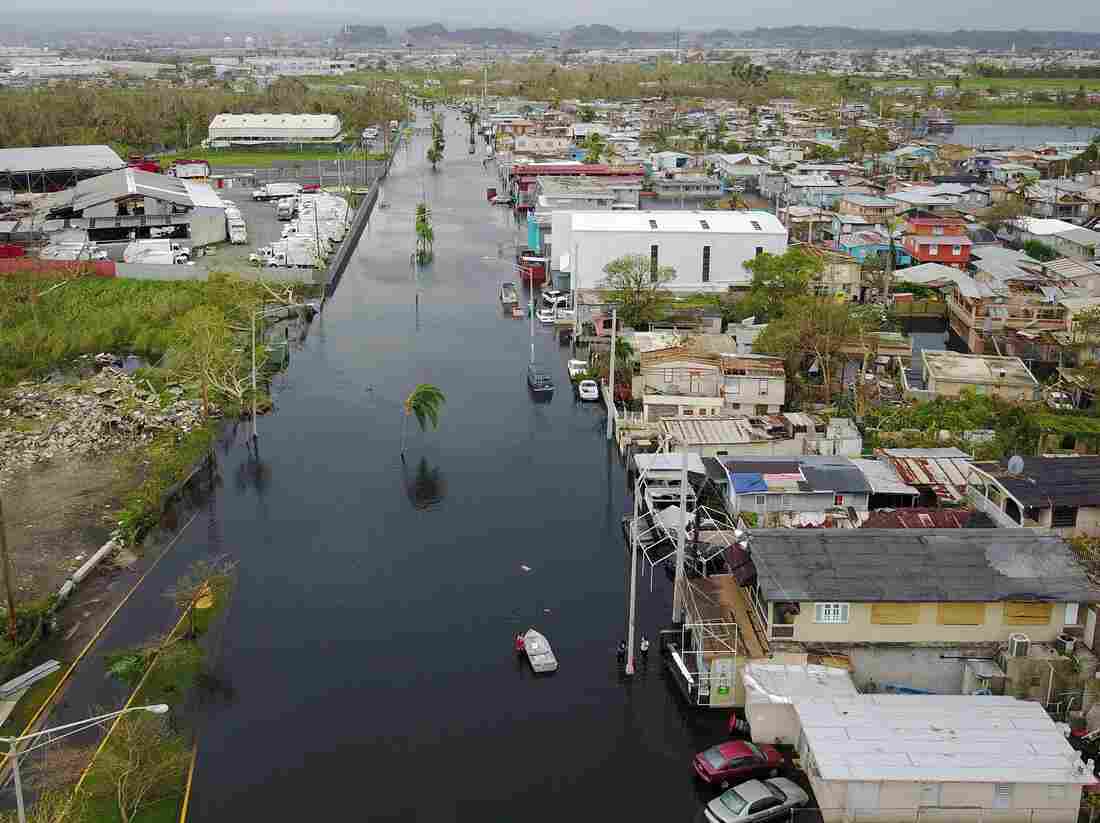 An aerial view shows the flooded neighborhood of Juana Matos in the aftermath of Hurricane Maria in Catano, Puerto Rico, on Friday. The island could be without power for months, complicating relief efforts. Ricardo Arduengo/AFP/Getty Images hide caption 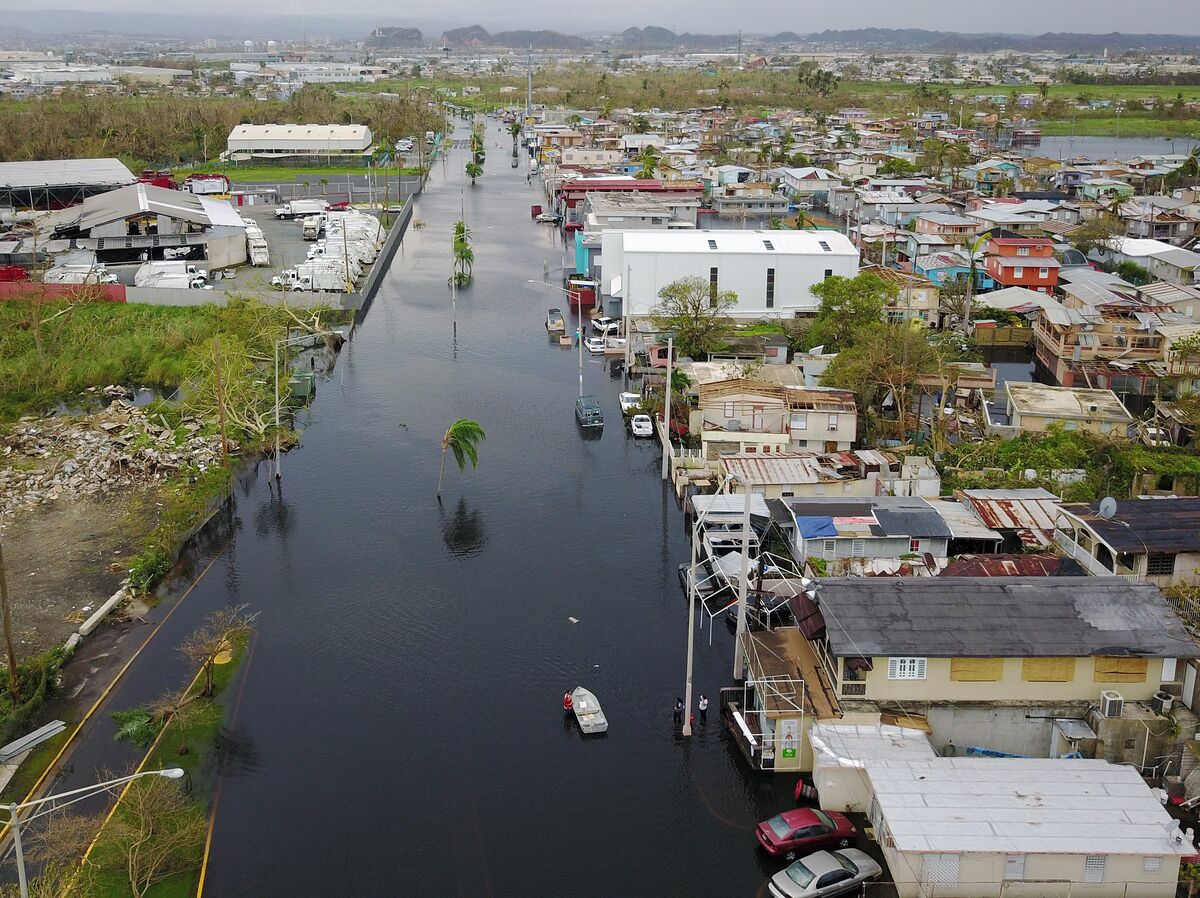 An aerial view shows the flooded neighborhood of Juana Matos in the aftermath of Hurricane Maria in Catano, Puerto Rico, on Friday. The island could be without power for months, complicating relief efforts.

"We have fuel, but we don't have the way to take the fuel to the hospitals. And many of the gas stations, for example, are just with great damages," said Villafane. "We have 34 hospitals around the island, and many of them are operating with their own generators, but they will go out of gas promptly. We are making the adjustments to provide them with the oil and gas and to provide them the electricity as soon as possible."

Garrett Ingoglia is the vice president of emergency response at Americares, a Connecticut-based relief organization that is working to provide medical supplies and assistance to Puerto Rico. He said the obstacles in responding to Maria started immediately: Like other organizations, Americares hasn't yet been able to get anyone into Puerto Rico since the storm.

"We are sending an assessment team to Puerto Rico and are having trouble getting in. They've been on various commercial flights that have been canceled," he told NPR. "Some of our partners think they can get us on a flight in from Fort Lauderdale tonight."

When Florida was hit by Irma, Ingoglia said, workers from Americares were able to drive in to deliver supplies and aid. "But you know, you can't do that with islands."

How To Soften The Blow From Recent Hurricanes And Earthquakes

After Superstorm Sandy, he says, people in parts of New Jersey were without power for weeks, and his organization delivered blankets because it was getting cold. "But without power for months? I don't know if we've faced that."

Providing aid "in a place with as many people as Puerto Rico without power for weeks or months on end — that's going to be very challenging," he said.

Some medicines, like insulin, need to be kept at certain temperature. Ingoglia said if refrigeration isn't possible, it's going to be very difficult to provide people with the medicines they need.

"You can use generators, but those need diesel fuel, and that's going to be in short supply as well," he said. "These are some of the challenges when you have a grid that's not that great."