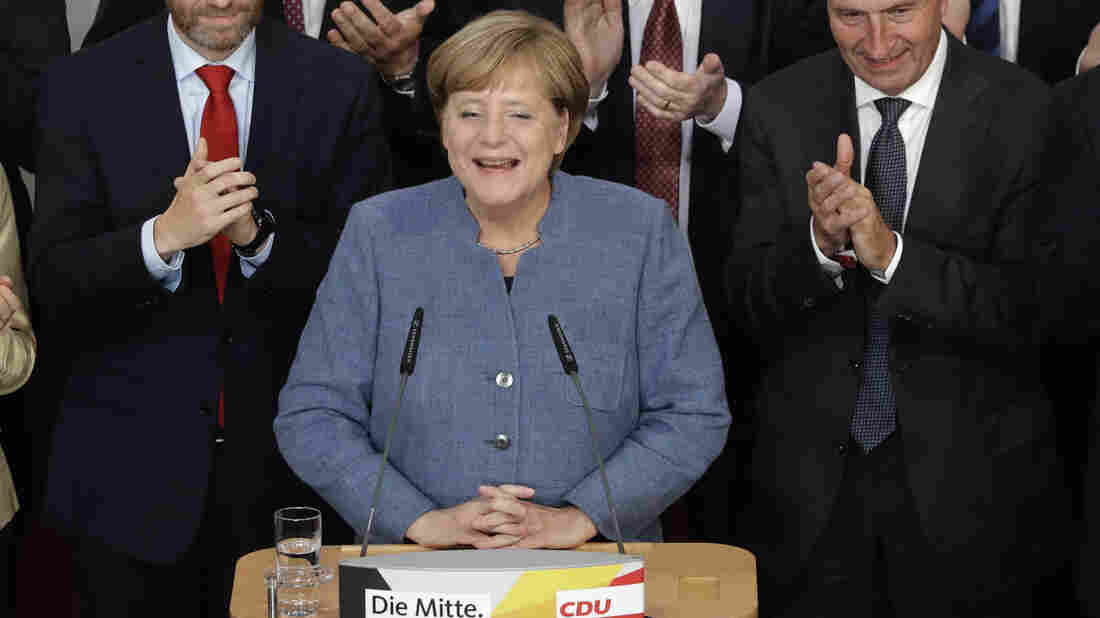 Even though German Chancellor Angela Merkel's Christian Democratic Union party came in first in Sunday's parliamentary election, she said she "would have preferred a better result." Matthias Schrader/AP hide caption 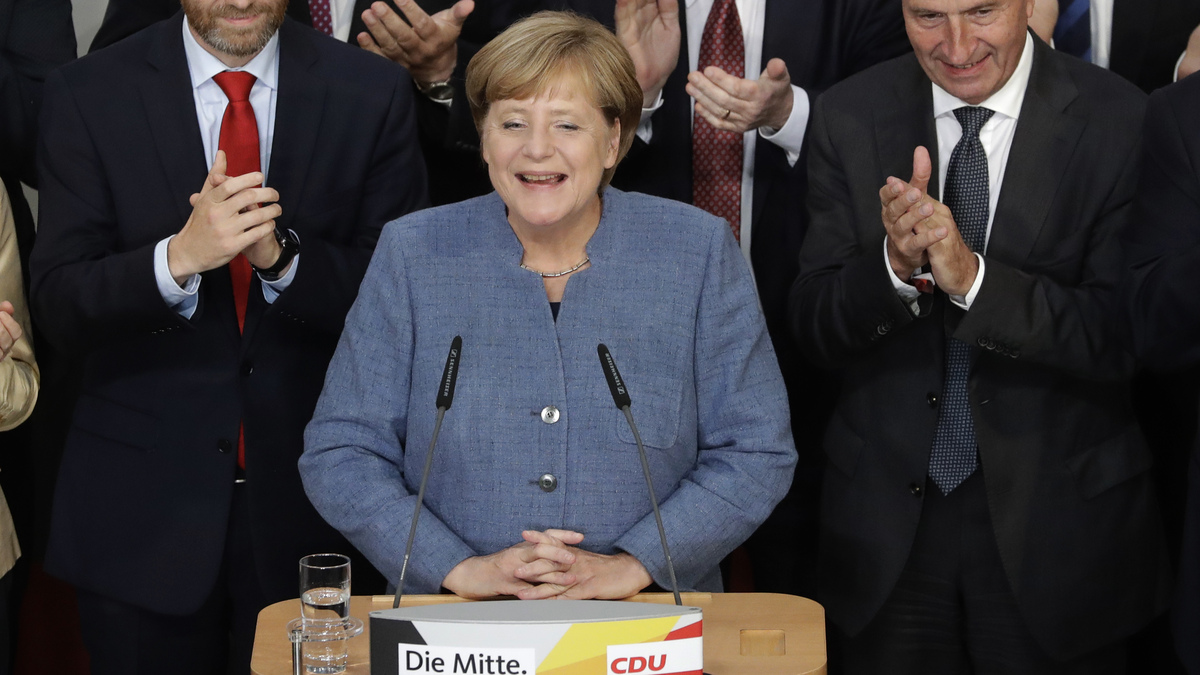 Even though German Chancellor Angela Merkel's Christian Democratic Union party came in first in Sunday's parliamentary election, she said she "would have preferred a better result."

Chancellor Angela Merkel is in position to rule for a fourth term, according to early exit polls in Germany's national election, which also saw voters send the right-wing Alternative for Germany party (AfD) to Germany's parliament, the Bundestag.

German media characterized the results of Sunday's vote as a major shift. Der Spiegel reports, AfD is the "first overtly right-wing party to win seats in the country's federal parliament in over half a century."

With around 33 percent of the vote, Merkel's Christian Democratic Union party came in first in Sunday's vote, but it was its worst showing since 1949.

"Of course we would have preferred a better result," Merkel said, according to The Associated Press. But she observed that her party has been in power for the past dozen years, the last four of which have been "extremely challenging."

The CDU is projected to hold 218 seats out of the Bundestag's 631 total.

Merkel's outgoing coalition partner, the Social Democrats, received just 20 percent of the vote, its worst showing ever. But it was enough for a second place result of 138 seats in parliament, according to early results.

"Today is a difficult and bitter day," said SPD leader Martin Schulz, who had hoped to take the chancellorship from Merkel. Schulz announced that he will not partner in another grand coalition and that his party will go into opposition.

The so-called Jamaica coalition, which would see Merkel ruling together with the Greens and the liberal Free Democrats, is her likeliest path toward a majority in parliament. The coalition is so named because the parties' colors of green, yellow and black mirror the Jamaican flag.

The AfD came in third Sunday, with early results showing it received more than 13 percent of the vote. The xenophobic party ran on an anti-immigrant platform with an emphasis on closing Germany's borders to migrants. It had been fiercely opposed to Merkel's recent welcoming of large numbers of refugees.

In the runup to the election, NPR's Soraya Sarhaddi Nelson reports German voters were inundated with campaign posters, including ones from the anti-Muslim AfD party with the blunt slogan: "Burkas? We prefer bikinis."

AfD's co-leader Alexander Gauland vowed Sunday that the party would "change this country," promising to pursue Germany's established parties. "We will hunt Ms. Merkel. We will bring back our nation," Gauland said.

The AfD is expected to hold some 87 seats in parliament.

Merkel told supporters Sunday that "we want to win back AfD voters" by solving the country's problems and addressing their concerns, reports AP. She said Germany has to take the fears of its people seriously.

The final election results are expected early Monday, German time, but are not expected to deviate greatly from Sunday's projections.