Accessibility links
First Female Marine Completes Grueling Infantry Officer Course : The Two-Way The 13-week program is considered one of the toughest in the U.S. military, and one-third of the class dropped out before graduation. The lieutenant has asked to keep her identity private. 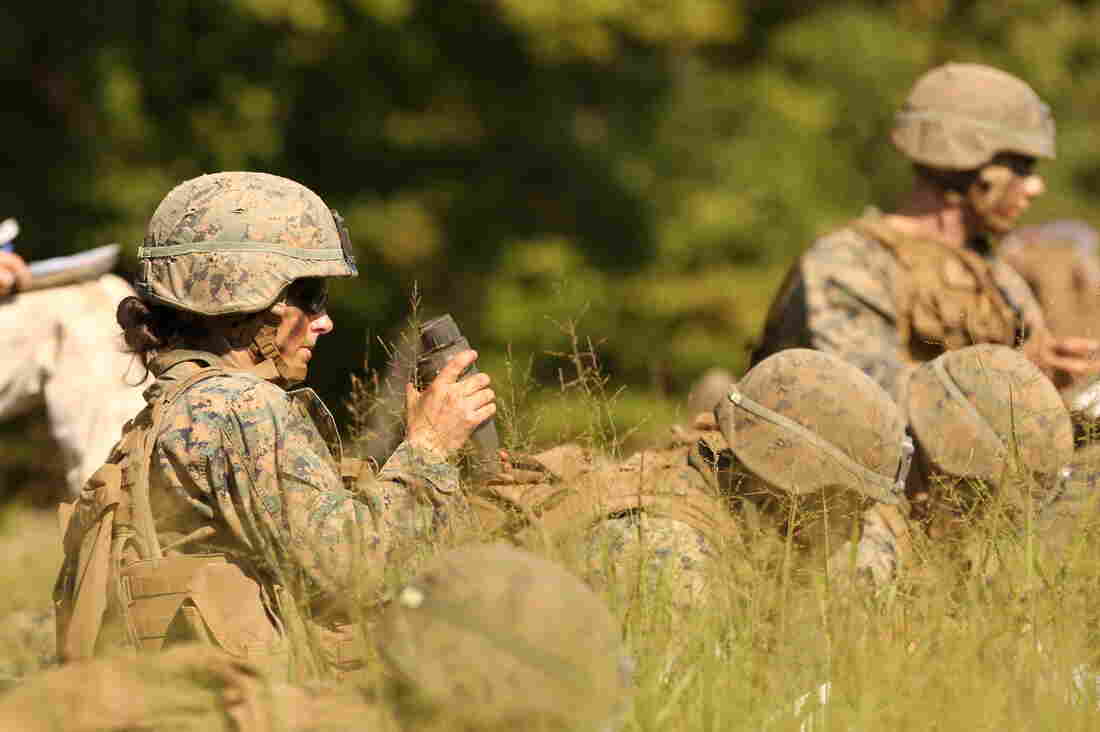 Marines participate in an exercise during the Infantry Officer Course in August at Quantico, Va. The first female Marine to complete the course graduated on Monday.

For the first time, a female Marine has completed the grueling Infantry Officer Course.

The 13-week course is considered one of the toughest in the U.S. military, and one-third of the class dropped out before graduation.

The Marines said in a press release that the lieutenant has "asked to keep her identity private." The Marine Corps Times reported that 36 other women have attempted the feat before but did not make it through.

Last year, the military opened up all front-line combat jobs to women. The Washington Post gives a sense of how difficult the infantry officer course is:

"The course requires both proficiency in the field, and the strength and stamina to carry equipment weighing up to 152 pounds. The school begins with a day-long combat endurance test that includes rigorous hikes through Quantico's rolling, wooded hills, an obstacle course and assessments of skills like weapons assembly and land navigation.

"Historically, about 10 percent of students fail the first day."

The course, according to the Marines, "trains and educated newly selected infantry and ground intelligence officers in leadership, infantry skills, and character required to serve as infantry platoon commanders in the operating forces."

The transition for women into Marine Corps combat roles has not been smooth, as The Two-Way has reported, with some male Marines questioning whether gender integration would impact operational readiness.

Proud of this officer & her fellow leaders. Now they focus on what's important: preparing to lead Marines in combat https://t.co/rwWjXKOAf9 pic.twitter.com/RvzTAkuLLI

"Because the infantry is the beating heart of the Corps and the most revered and influential group within the tribe, the significance of her achievement cannot be overstated," two retired Marines, Kate Germano and Joe Plenzler, wrote in a column in The San Diego Union-Tribune. "Despite its well-established legacy of tactical competence in combat, the Marine Corps has always served as a boat anchor dragging behind the rest of the services when it comes to social change."

Earlier this year, a trove of nude photos of female service members was shared on a Facebook page called Marines United, prompting a Pentagon investigation and tough questions from lawmakers.

The female infantry officer has been assigned to the 1st Marine Division at Camp Pendleton in California. The Marines published video of her participating in the Infantry Officer Course:

Gender integration in special operations jobs has not yet happened, the Post wrote: "Women have not yet met the qualifications to take elite jobs in special operations, including that of Navy SEAL and Army Green Beret, though at least three have attempted the Army's Special Forces Assessment Selection test."