Accessibility links
Athletes On The Track And The Slopes Are Pulled Into Trump Controversy : The Two-Way Some NASCAR and Olympic figures spoke out for and some against NFL players who kneel during the national anthem. 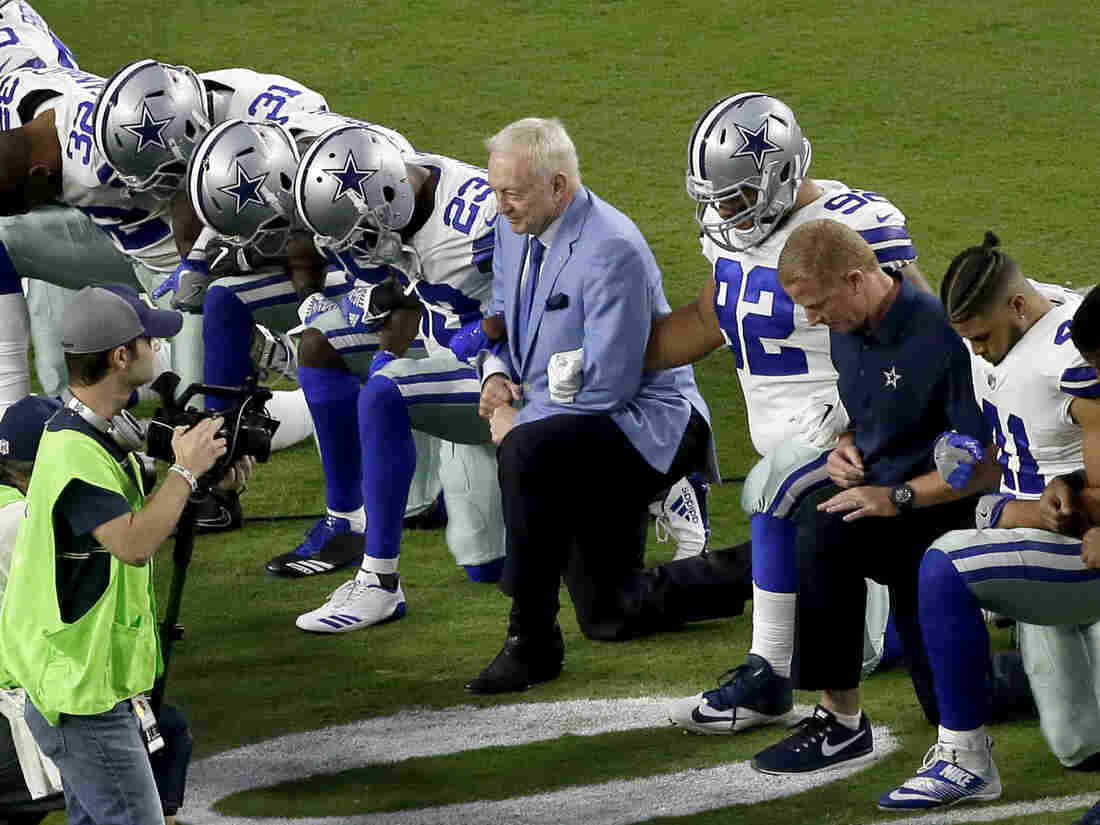 The Dallas Cowboys, led by owner Jerry Jones, center, take a knee prior to the national anthem Monday night in Glendale, Ariz., ahead of the team's game against the Arizona Cardinals. Matt York/AP hide caption 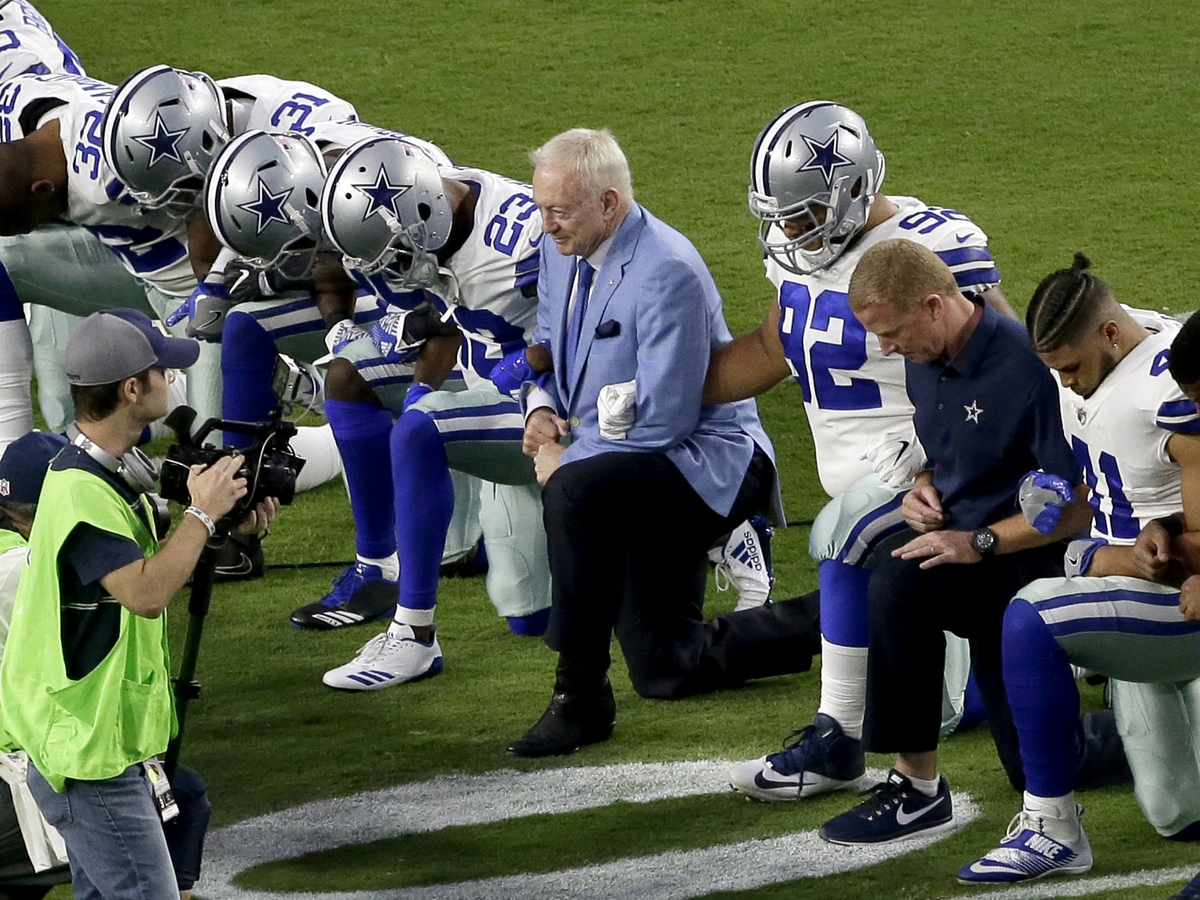 The Dallas Cowboys, led by owner Jerry Jones, center, take a knee prior to the national anthem Monday night in Glendale, Ariz., ahead of the team's game against the Arizona Cardinals.

The tumult in the sports world continued Monday after President Trump's incendiary remarks criticizing NFL players who have protested racial inequality during the playing of the national anthem. While the Dallas Cowboys and Arizona Cardinals showed solidarity with the protesters before their Monday night football game, NASCAR figures and Olympic athletes also weighed in.

The president had targeted the NFL and, to a lesser extent, the NBA but on Monday he praised professional racing, saying, "So proud of NASCAR and its supporters and fans. They won't put up with disrespecting our Country or our Flag — they said it loud and clear!"

Trump was responding to support from legendary racer Richard Petty and Hall of Fame team owner Richard Childress during the weekend. It served as a coda to a remarkable few days — a series of events that seemed to put to rest for good the idea that sports and politics don't mix.

"Anybody that don't stand up for that [the anthem] ought to be out of the country, period," Petty said. "If they don't appreciate where they're at, what got them where they're at? The United States."

Although Yahoo Sports notes it wasn't long ago that NASCAR drivers sat in their cars during the national anthem.

NBC Sports reported that Childress said, if one of his team members protested, "Get you a ride on a Greyhound bus when the national anthem is over. ... Anybody that works for me should respect the country we live in. So many people gave their lives for it. This is America."

Since most of the anthem protests have been conducted by African-American athletes, Trump's critics have said the president's use of the term "S.O.B." last Friday to describe protestors was racially insensitive. Critics say Trump's endorsement of NASCAR, a sport with, historically, an overwhelming number of white drivers, inflamed the racial component of the controversy.

Trump said several times Monday his comments had nothing to do with race.

NASCAR released a statement saying "Sports are a unifying influence in our society, bringing people of differing backgrounds and beliefs together. Our respect for the national anthem has always been a hallmark of our pre-race events. Thanks to the sacrifices of many, we live in a country of unparalleled freedoms and countless liberties, including the right to peacefully express one's opinion."

The flag and the anthem arguably are most significant in Olympic sports. Carrying the flag during opening and closing ceremonies is considered a high honor; winning a gold medal is followed by an emotional playing of the anthem while the flag rises.

Park City, Utah, is a long way from the pro football fields of America. But it's where many of this country's Winter Olympians are gathered for several days of media interviews in advance of next February's game in South Korea.

And like everywhere else in the sports world, talk in Park City turned to the president, NFL players and anthem protests. 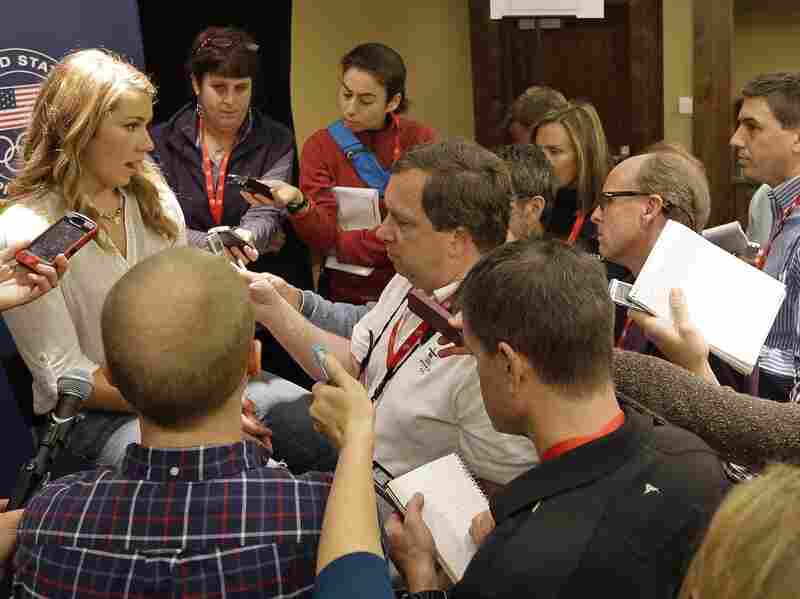 American alpine skier Mikaela Shiffrin speaks with reporters at the U.S. Olympic team media event Wednesday. Shiffrin said it's "cool" to see sports play a bigger role in politics and culture than it has in the past. Rick Bowmer/AP hide caption 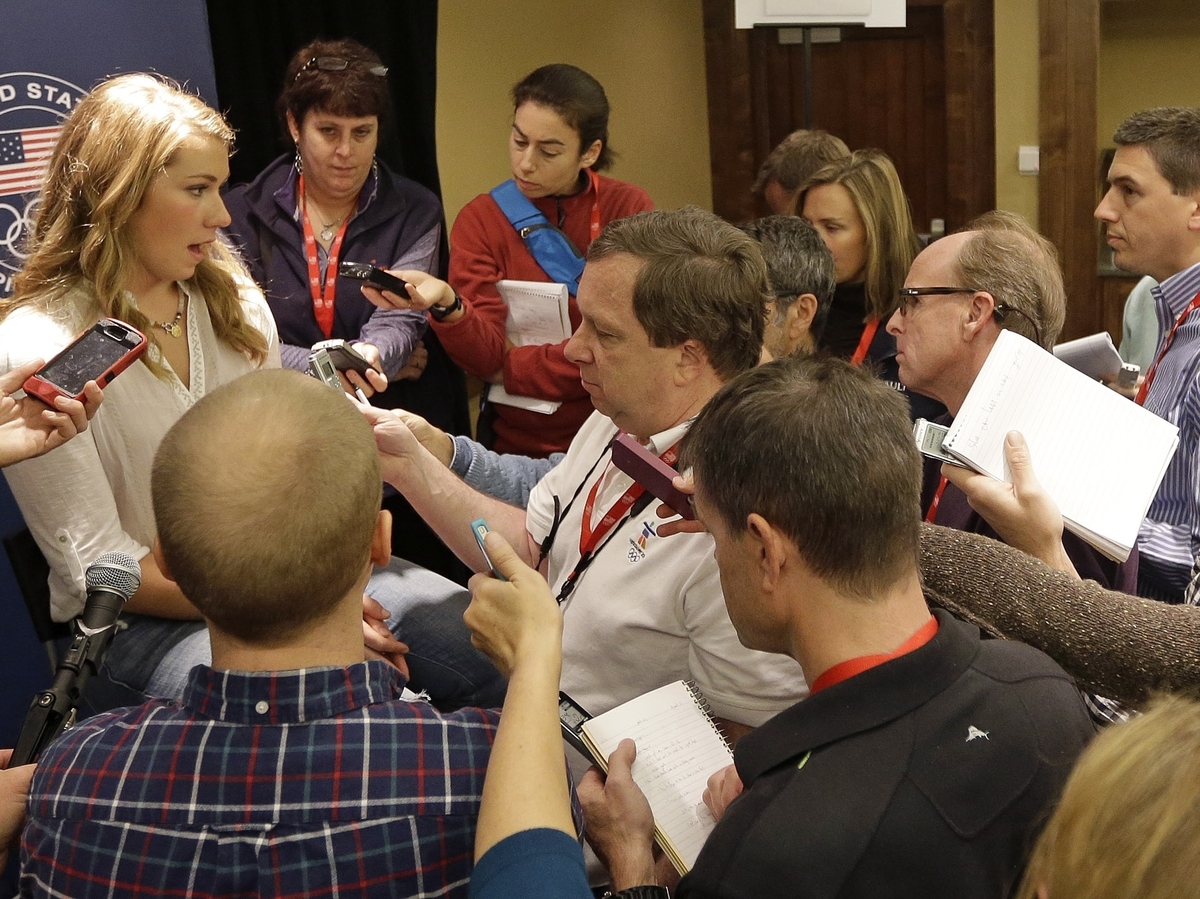 American alpine skier Mikaela Shiffrin speaks with reporters at the U.S. Olympic team media event Wednesday. Shiffrin said it's "cool" to see sports play a bigger role in politics and culture than it has in the past.

"I think the president of the United States has a very important job," said U.S. figure skater Adam Rippon. "I think there are so many things going on in the world that we should be focused on. President Trump speaking up and against freedom of speech is dangerous and divisive."

"Some people think that we should just shut up and ski or shut up and play," said Alpine ski racer Laurenne Ross. "But the fact that the Internet exists and there's all this social media and news spreads so fast, is actually a really wonderful thing for us and it helps us have a voice."

Gold medal winning skier Mikaela Shiffrin said it's "cool" to see sports play a bigger role than it has in the past.

"It gives us all a really great opportunity to share our values with the world," said Shiffrin, adding, "I think the Olympics will be the same thing. We have to be careful not to offend anyone when we're there because we're not just talking about the U.S., we're talking about the entire world. But it has been interesting to see how sports has taken a stronger role these past few months."

Figure skater Ashley Wagner said she absolutely respects the different ways Americans express their freedom of speech. But Wagner, a self-described Army brat, also respects how special a flag and an anthem are in an Olympic Games.

"I think for me going into South Korea, when I hear the anthem, I hear it when I'm standing on top of the podium," she said. "So for me it's a huge moment of pride and it's a moment I really hope to experience for myself in Korea."

As far as a possible anthem protest at the games, the most famous of which took place in Mexico City in 1968, International Olympic Committee rules strictly forbid what we've seen over the past weekend on NFL fields.

According to Rule 50 of the Olympic Charter, "No kind of demonstration or political, religious or racial propaganda is permitted in any Olympic sites, venues or other areas."

Still, USOC CEO Scott Blackmun said in Park City he and other officials support the right of athletes to speak their minds.