Accessibility links
Puerto Rico Struggles To Deliver Aid To Millions Of Stricken Americans : The Two-Way President Trump says he'll visit the island next week, planning a Tuesday trip to survey the damage in an area he says was "literally destroyed."

People carry water in bottles retrieved from a canal due to lack of water after Hurricane Maria, in Toa Alta, Puerto Rico, on Monday. Hector Retamal/AFP/Getty Images hide caption 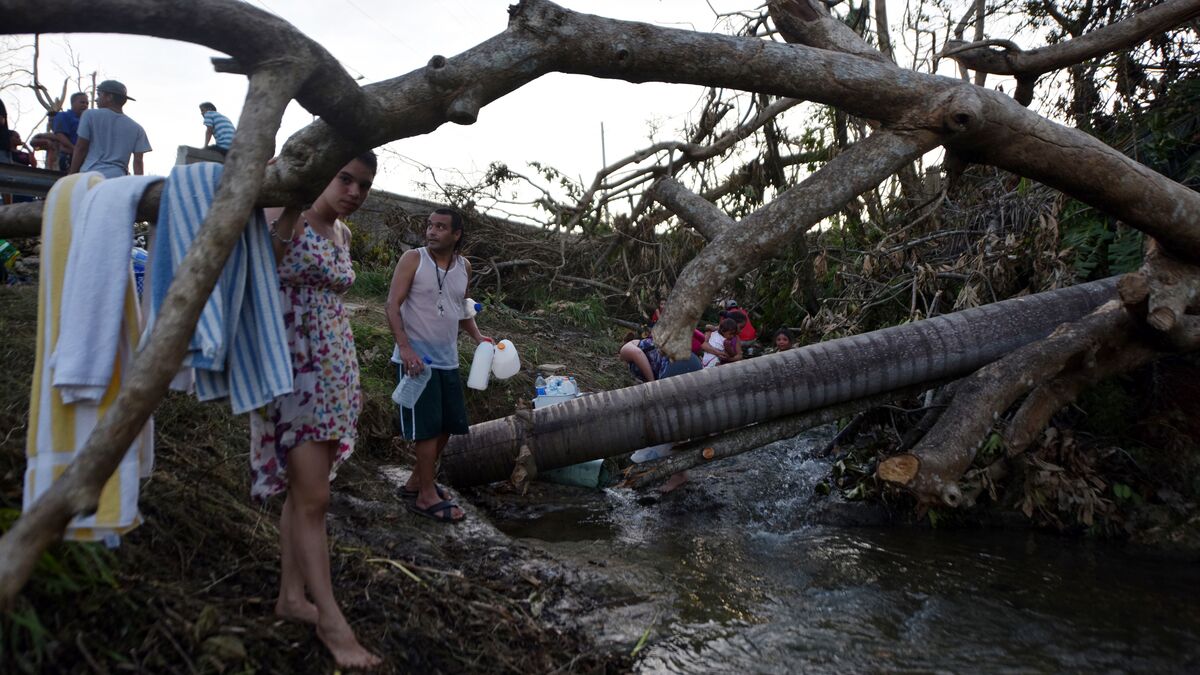 People carry water in bottles retrieved from a canal due to lack of water after Hurricane Maria, in Toa Alta, Puerto Rico, on Monday.

Much-needed supplies are either in Puerto Rico or on the way, officials say, but the island's governor acknowledges that they can't deliver fuel and other material quickly enough. Frustrated residents face long lines for fuel, as millions of people have gone nearly a week without power.

"We need resources and security. We need a quicker logistical deployment," Gov. Ricardo Rossello told NPR's Mary Louise Kelly on Tuesday. "You know, the gas and fuel issue is not a matter of how much do we have — it's a matter of how we can distribute it."

How To Soften The Blow From Recent Hurricanes And Earthquakes

President Trump says he'll visit the island next week, planning a Tuesday trip to survey the damage. Trump said the island was "literally destroyed," according to a White House pool report, but he added that he's confident the island will bounce back. Of the people in Puerto Rico, Trump said they "are important to all of us."

Six days after Hurricane Maria ran through Puerto Rico after making landfall as a Category 4 storm, people on the island are struggling to recover and officials are having trouble getting vital supplies where they're needed.

He added, "Today in the morning we sent about a hundred trucks with fuel everywhere in the island. That should start mitigating this a little bit."

At A Gas Station With No Gas, Puerto Ricans Settle In For An Interminable Wait

With much of Puerto Rico's infrastructure unable to function, long lines have formed at gas stations. And because cellphone service is also down nearly everywhere on the island, there's no way for station owners to know when fuel trucks might arrive — and no way for drivers to share information about where fuel is available.

In Rio Grande, some 15 miles east of San Juan, NPR's Camila Domonoske spoke to a man who was among the scores of people and some 100 cars waiting on gas.

Alfred Rodrigo Maldorado told Camila that Hurricane Maria made history as a strong hurricane, but "what is actually historic is the absence of our government."

That criticism echoes observations that emerged over the weekend, as President Trump devoted more than a dozen tweets to weigh in on how NFL athletes should behave during the national anthem — but no tweets about the 3.5 million Americans who need federal help to re-establish basic services in both Puerto Rico and the neighboring Virgin Islands.

Trump broke that temporary silence late on Monday, using a series of tweets to say:

"Texas & Florida are doing great but Puerto Rico, which was already suffering from broken infrastructure & massive debt, is in deep trouble.. ...It's old electrical grid, which was in terrible shape, was devastated. Much of the Island was destroyed, with billions of dollars.... ..owed to Wall Street and the banks which, sadly, must be dealt with. Food, water and medical are top priorities - and doing well."

Texas & Florida are doing great but Puerto Rico, which was already suffering from broken infrastructure & massive debt, is in deep trouble..

On Tuesday morning, the president thanked San Juan Mayor Carmen Yulin Cruz for her words about FEMA, adding, "We are working hard. Much food and water there/on way."

As for other supplies, Rossello told NPR on Tuesday, "There is food coming. The ports have opened. There are medicines coming. There are articles of first need that are here already. The regulating step is the deployment of those assets."

Puerto Rico is asking FEMA to send more personnel to help, he said; a request has also gone out to states to send members of their National Guards to pitch in.

"It's unprecedented," Rossello said of the conditions in Puerto Rico after two powerful hurricanes — Irma and Maria — in the space of days. He added, "The magnitude of this is enormous."