Accessibility links
Many Questions Remain In The Aftermath Of The Las Vegas Shooting : The Two-Way As investigators examine several crime scenes, they still have not determined the shooter's motive. 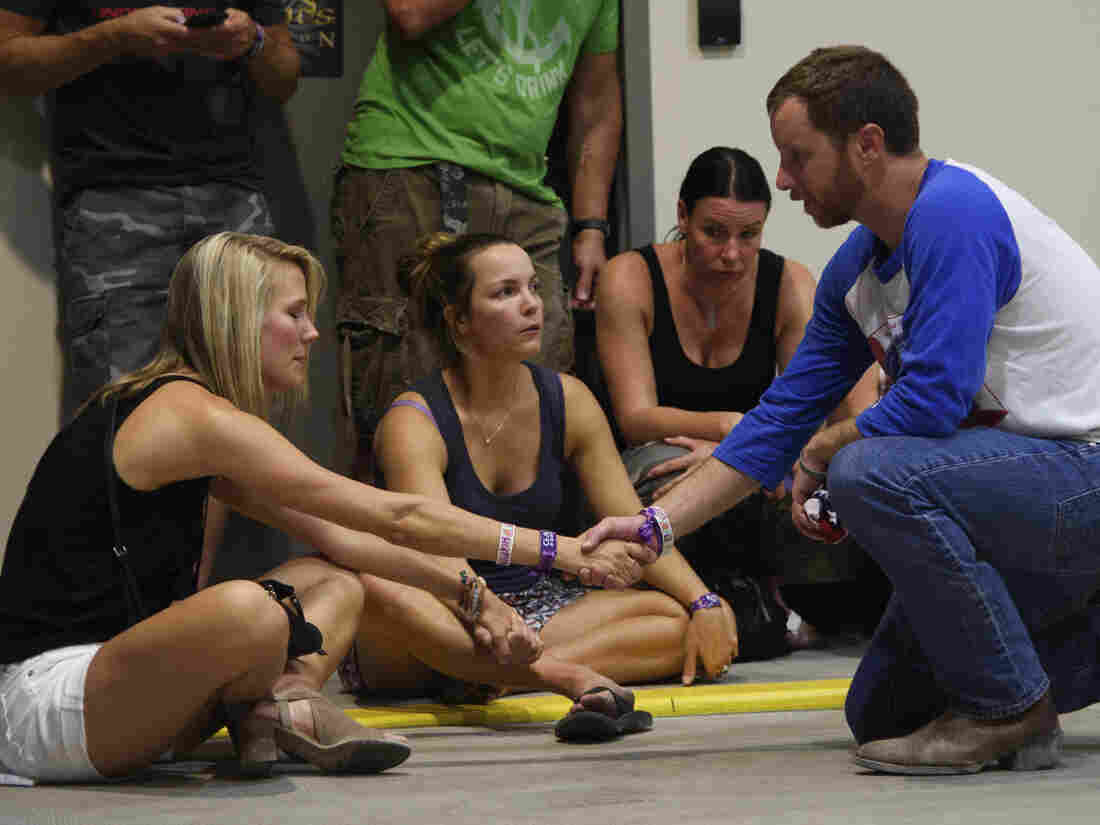 People hold hands in prayer while hiding inside an airplane hangar after a mass shooting in which dozens were killed at the Route 91 Harvest Festival in Las Vegas. Al Powers/Invision/AP hide caption 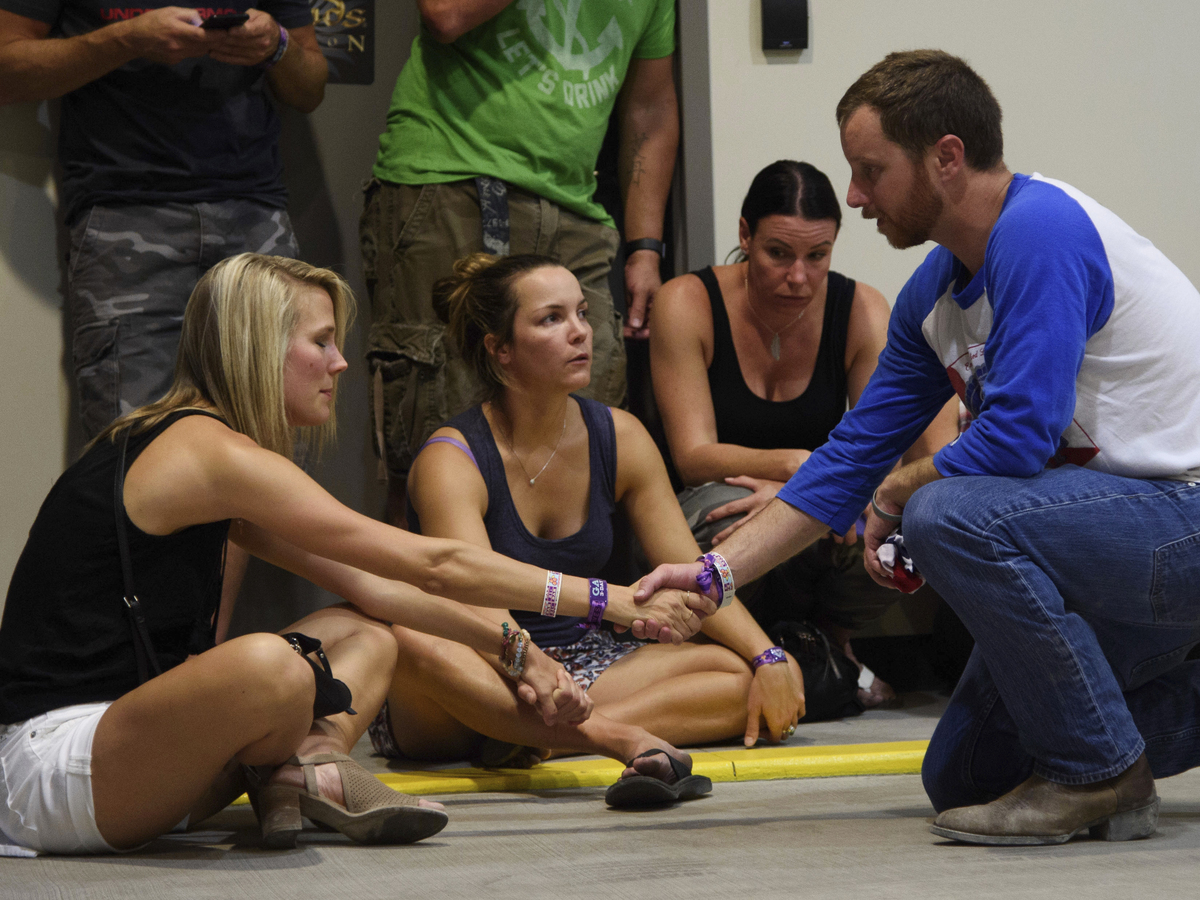 People hold hands in prayer while hiding inside an airplane hangar after a mass shooting in which dozens were killed at the Route 91 Harvest Festival in Las Vegas.

Less than 24 hours after the massacre at an open-air country music concert in Las Vegas, authorities are still piecing together what shooter Stephen Paddock did in preparation for his deadly shooting rampage that left 59 people dead and 527 others injured.

There is still a lot they don't know about what motivated Paddock, described by officials as a "lone wolf," to launch the most deadly mass shooting in modern U.S. history.

In a news conference Monday afternoon, Clark County Sheriff Joseph Lombardo said his deputies are still processing four crime scenes: the 32nd floor of the Mandalay Bay Resort and Casino, from where Paddock shot his victims about 500 yards below; the venue at the Route 91 Harvest festival concert; Paddock's home in Mesquite, NV, about 80 miles northeast of Las Vegas; and another home in Reno in northern Nevada.

Lombardo initially said that 16 weapons were found in Paddock's hotel room, where he had been staying since Sept. 28. Scopes were attached to "some of the rifles," he added without more detail. Investigators found an additional 18 firearms in Paddock's Mesquite home, as well as several thousand rounds of ammunition and explosives. They also found several pounds of ammonium nitrate, a key component for making a bomb, in Paddock's car.

Still, the investigation is fast-moving and fluid as, four hours later, the gun count increased. In an early evening news conference, Assistant Sheriff Todd Fasulo said that 23, not 16, weapons had been found in the Mandalay Bay hotel room and 19, not 18 weapons had been discovered in Paddock's Mesquite home.

Also, the office of Rep. Adam Schiff, (D-Calif.) said that he had been briefed by the FBI and informed that some, but not all of the weapons found in the hotel room were fully automatic. It was not clear whether those weapons were manufactured as fully automatic or whether Paddock had converted them.

Law enforcement officers had conducted a floor by floor search beginning on the 29th floor. Upon arriving at Paddock's suite on the 32nd floor, they announced themselves. Paddock responded by shooting through the door, wounding a security guard in the leg, Lombardo said.

"They received gunfire. They backed off and SWAT responded," said a somber Lombardo. They entered the room to find Paddock dead. The sheriff said investigators believe Paddock killed himself.

Lombardo also said that he had dispatched a SWAT team to examine Paddock's house in northern Nevada to make sure there are no booby traps.

Lombardo said investigators still have not identified Paddock's motive for the shooting. Paddock's brother, Eric Paddock, of Orlando, FL, said he was a wealthy retired accountant and high stakes gambler.

Investigators also don't know how Paddock managed to assemble such a large arsenal of weapons in his hotel suite. Lombardo said that his team is still working on the origins of the arsenal, saying that one gun dealer in Nevada has stepped forward to say that he had sold one firearm to Paddock. When asked whether he would characterize Paddock's firearms as "assault weapons," Lombardo simply said, "Yes."

Earlier in the day, President Trump, appearing before reporters at the White House, said that he would visit Las Vegas on Wednesday.

He called the mass shooting "an act of pure evil," adding "In moments of tragedy and horror, America comes together as one — and it always has."

The mayor of Las Vegas, Carolyn Goodman, summed up the mood of the many local and state officials gathered for an afternoon news conference.

"It is a very difficult time. While the sun is shining in Las Vegas, it is a very dark and black day," she said.

An earlier version of this story included an incorrect account of what investigators say happened when police got to the gunman's hotel room. It has not been confirmed that he was shot dead. In fact, as of early Tuesday, investigators still believed the gunman had killed himself.