Accessibility links
Las Vegas Shooting Update: Gunman Investigated As Victims Are Mourned : The Two-Way Investigators are learning more about Stephen Paddock and the weapons he used to fire at a crowded music venue Sunday. We're also learning more about those who were killed in the vicious attack. 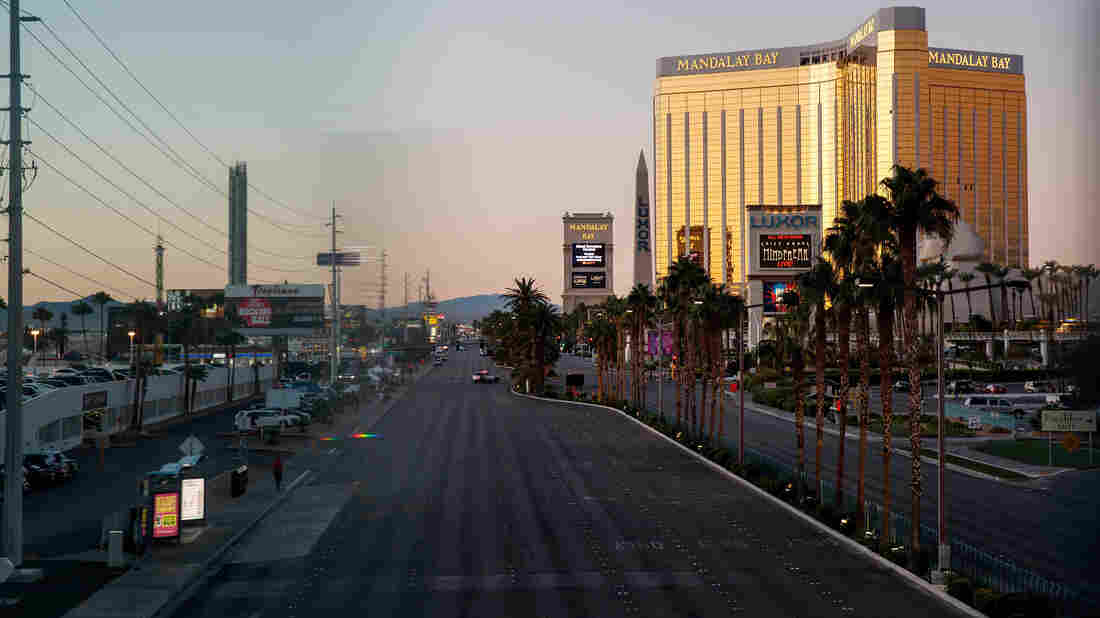 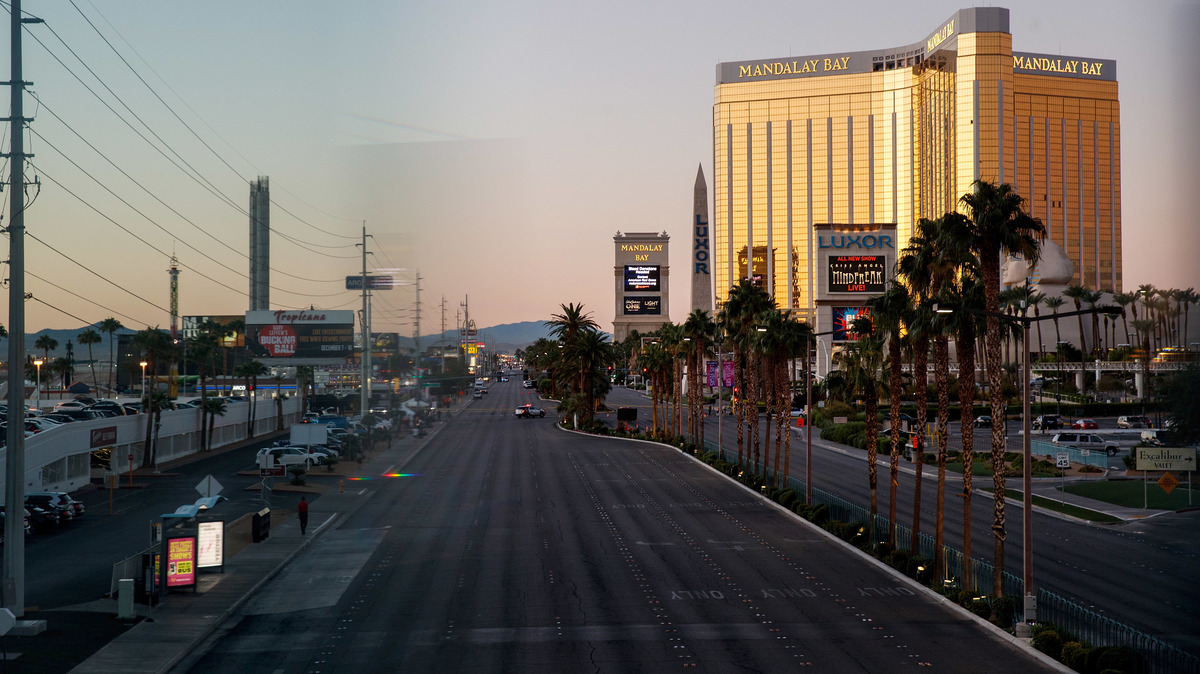 Police are still trying to determine what motivated Stephen Paddock to rain gunfire on some 22,000 music fans along the Las Vegas Strip on Sunday night. The attack left 59 people dead and more than 500 people were injured, in the worst mass shooting in recent U.S. history.

In an afternoon news conference, Las Vegas Sheriff Joseph Lombardo said that the number of injured, reported at 527 yesterday, has "decreased slightly...maybe 20, because we had a double count error occurring at one of the hospitals."

Paddock unleashed a prolonged and vicious assault from the 32nd floor of the Mandalay Bay Resort and Casino shortly after 10 p.m. local time, as musician Jason Aldean was performing. Aldean had been scheduled to go on at 9:40 p.m., as the last act of the three-day festival.

Lombardo said the shooting went on for about 9 minutes. It was "obviously premeditated. The fact that he had the type of weaponry and amount of weaponry in the room, it was pre-planned extensively and I'm pretty sure he evaluated everything he did in his actions," he said.

Lombardo did not provide a precise timeline of when and how police and hotel security determined where Paddock was located. But he said their swift action in finding his 32nd floor room "saved hundreds of lives."

Responding to what he called rumors of multiple attackers at the concert, Assistant Sheriff Todd Fasulo told reporters late Monday that officials "have no information or evidence" that there was anyone but a solo gunman responsible.

Here's more of what we know about crucial elements of the case:

Responding to calls that a concert venue was under assault, police officers almost immediately reported that they were facing fully automatic gunfire.

Police say they found 23 firearms in the Mandalay Bay hotel room where Stephen Paddock fired down on the crowd and 19 in his home in Mesquite, Nev. The guns at the hotel included fully automatic weapons, according to California Rep. Adam Schiff, of the House Intelligence Committee, citing a briefing from FBI officials.

"In other mass shootings — at Newtown; San Bernardino; Aurora — killers use those semiautomatic weapons," NPR's Joseph Shapiro reports on Morning Edition. "They reload automatically, but they shoot just one round for every trigger pull. And those fully automatic weapons are very hard to come by. They're highly regulated. And as a result, they're rarely used in crime. So this would add an even more gruesome detail."

Some rifles had also been modified to be virtually fully automatic. The Associated Press says investigators found two "bump stock" devices — simple modifications to the gun's shoulder stock that often cost around $300 — though that detail hasn't been officially confirmed. The devices convert energy from guns' natural recoil to fire much faster than a normal semiautomatic weapon.

"If they were made before 1986, you can still get one legally. You have to pay the tax, it's still $200. You get a background check, you register your fingerprints with the Bureau of Alcohol Tobacco and Firearms. But there aren't a lot of those legal ones around. In 2006, there were fewer than 400,000 on the machine gun registry. So they're hard to find, and that means they cost a lot — about the price of a small car."

Sheriff Lombardo said that Alcohol, Tobacco and Firearms investigators are participating in the evaluation of the weapons. He offered no information on whether any of the firearms were automatic.

"But we are aware of a device called a 'bump stock' and that enables an individual to speed up the discharge of ammunition," he said.

ATF and FBI are sending the weapons to the FBI Crime Lab for further evaluation, he added.

At least one gun store near Paddock's home has released a statement saying he passed background checks and that all legal procedures were followed. Other stores and gun ranges in the area have also acknowledged being in contact with authorities about Paddock, according to NBC News.

The ATF is tracing the weapons' histories, as well as breaking them down to determine which ones were used in the attack — and which ones might have been further modified, Clark County Sheriff Joe Lombardo said.

Sheriff Lombardo says investigators have identified all but three victims and the Mandalay Bay concert venue is still "an active scene." He said his teams and the FBI are still documenting the scene.

Charleston Hartfield, an off-duty police officer, was among those killed; so was special education teacher Sandy Casey, who was at the concert with her fiancé. Navy veteran Christopher Roybal of California also died — after surviving gun battles in Afghanistan.

All the names of the dead and injured have not yet been released, as police and investigators process the scene and inform families and loved ones.

Among those killed were Sonny Melton, a registered nurse from Big Sandy, Tenn. — his wife says he saved her life at the concert.

Heather Melton told USA Today, "He grabbed me from behind and started running when I felt him get shot in the back."

Sandy Casey worked at Manhattan Beach Middle School in Los Angeles County, where an official said Monday she was "absolutely loved by students and colleagues alike and will be remembered for her sense of humor, her passion for her work, her devotion to her students, her commitment to continue her own learning and taking on whatever new projects came her way," according to member station KPCC.

Rachael Parker, a records technician in the Manhattan Beach police department, also died in the attack. She was one of four department employees who were at the festival. One of her colleagues was also shot, suffering minor injuries.

We have a separate story about those who lost their lives in the Las Vegas attack; we'll be adding to it as their names and stories emerge.

A GoFundMe campaign for victims of the shooting and their families has raised some $3.7 million since it was started on Monday by Clark County Commission Chair Steve Sisolak.

After city officials made repeated calls for blood donations on Monday, Fasulo said, "They have enough supply to last them for the foreseeable future."

Why Did Stephen Paddock Open Fire On Las Vegas Concert?

Even before those calls went out, residents and visitors had been lining up to donate — prompting still more volunteers to show up with water and snacks for those waiting.

As of Tuesday, local officials were asking people to contribute to charities, saying they've been overwhelmed by support.

"Shows of support have been amazing & greatly appreciated," Clark County said via Twitter. "First responders have enough items to deal with immediate need."

On Monday evening, the Las Vegas City Hall hosted a prayer vigil to honor those who lost their lives in the violence. As images from the scene show, many people bowed their heads in silence and listened to religious and city leaders. And as the event ended, music and singing broke out.

After darkness fell, the exterior of City Hall was lit up with the colors of the American flag. 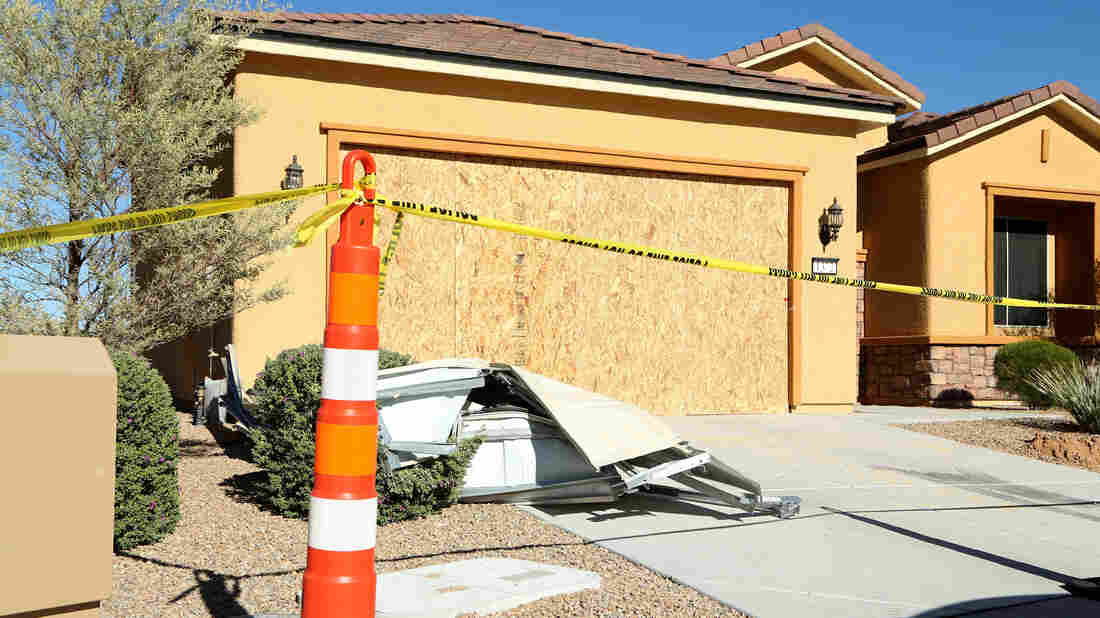 Remains of the garage door sit in the driveway at the house where Las Vegas gunman Stephen Paddock lived in the Sun City community in Mesquite, Nev. Gabe Ginsberg/Getty Images hide caption 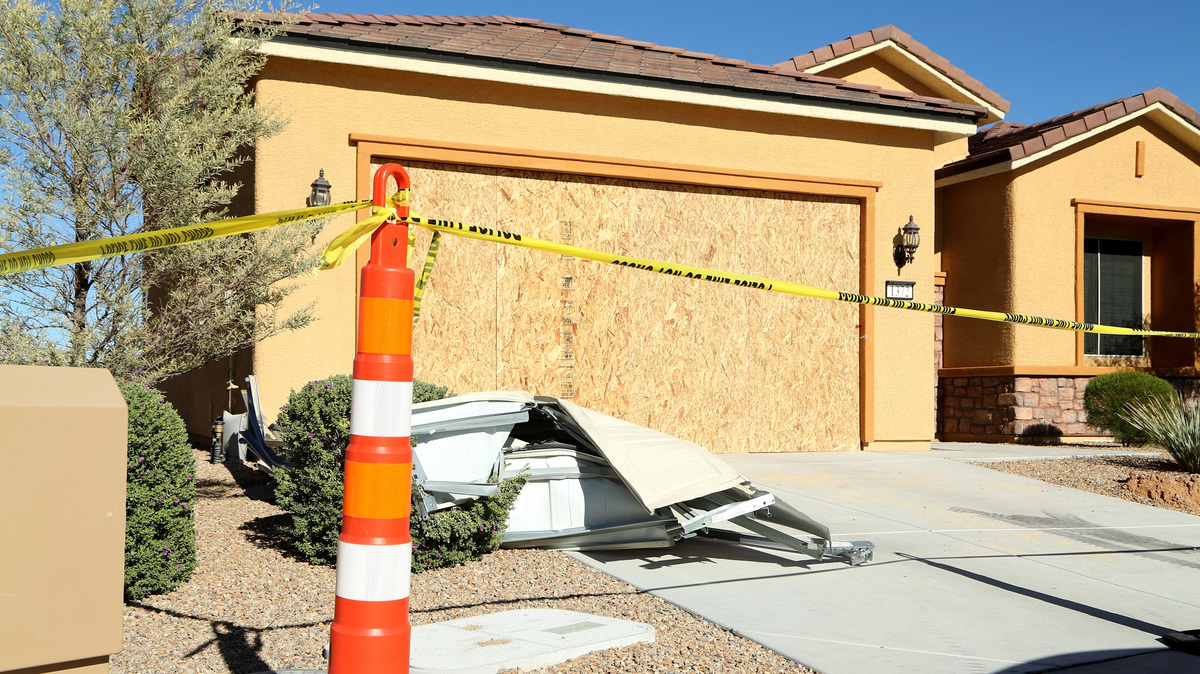 Remains of the garage door sit in the driveway at the house where Las Vegas gunman Stephen Paddock lived in the Sun City community in Mesquite, Nev.

The gunman, identified as Stephen Craig Paddock, 64, lived in a retirement community in Mesquite, Nev. He was twice divorced and reportedly loved to gamble at Las Vegas casinos, as NPR's Scott Neuman reported.

Police have said they haven't found a manifesto or other type of direct explanation for why Paddock would have carried out such a violent act.

So far, a motive in the case has been elusive, says NPR's law enforcement correspondent, Martin Kaste.

"This man is not fitting any of the common profiles we've come to expect for perpetrators of these mass shootings," Martin reports. "He's an older man. He apparently had enough money — apparently well to do, actually, from real estate investments. He didn't have any known sort of religious affiliation that might have driven him to this. There was no sort of cause that he'd espoused that anyone knew about."

Investigators are going through a computer and other electronic devices they recovered, hoping to find out more about Paddock and the possible reasons for his actions.

Police say they believe Paddock killed himself. A SWAT team used an explosive to breach Paddock's room, and Sheriff Lombardo said that when police entered, they "found the suspect dead."

Investigators still want to know more about Paddock's girlfriend, Marilu Danley, who is currently in the Philippines. In the Tuesday news conference, Lombardo said that Danley is "a person of interest." He would not comment on reports that Paddock had recently transferred $100,000 to the Phillipines.

"I will assure that the investigation with her is on-going and we anticipate some information here from her shortly," he said. "This investigation is not ended with the demise of Mr. Paddock."

Officers who approached Paddock in the hotel room and who visited his properties have been wary of booby traps, Lombardo said.

Giving a rough estimate of the distance from Paddock's hotel room to the concert venue, Sheriff Lombardo said he believes it to be "in excess of 500 yards."

He added that police have been focusing on four different locations:

Lombardo disclosed some new details about the Mandalay Bay hotel room. He said that Paddock had set up cameras, both inside and outside the room and that the latter were used for alerting him to when the police might arrive to apprehend him.

"The FBI took all digital and electronic evidence into custody," he said.

In addition, law enforcement officials found "several pounds" of ammonium nitrate fertilizer, which has been used in attacks utilizing explosives in the past, in Paddock's car.