Accessibility links
Las Vegas Shooting: Audio And Partial Transcript Of Police Response : The Two-Way As bullets rained down on a concert Sunday, police struggled to save dozens of people — and determine who exactly was attacking them. What was it like for officers in those confusing minutes? 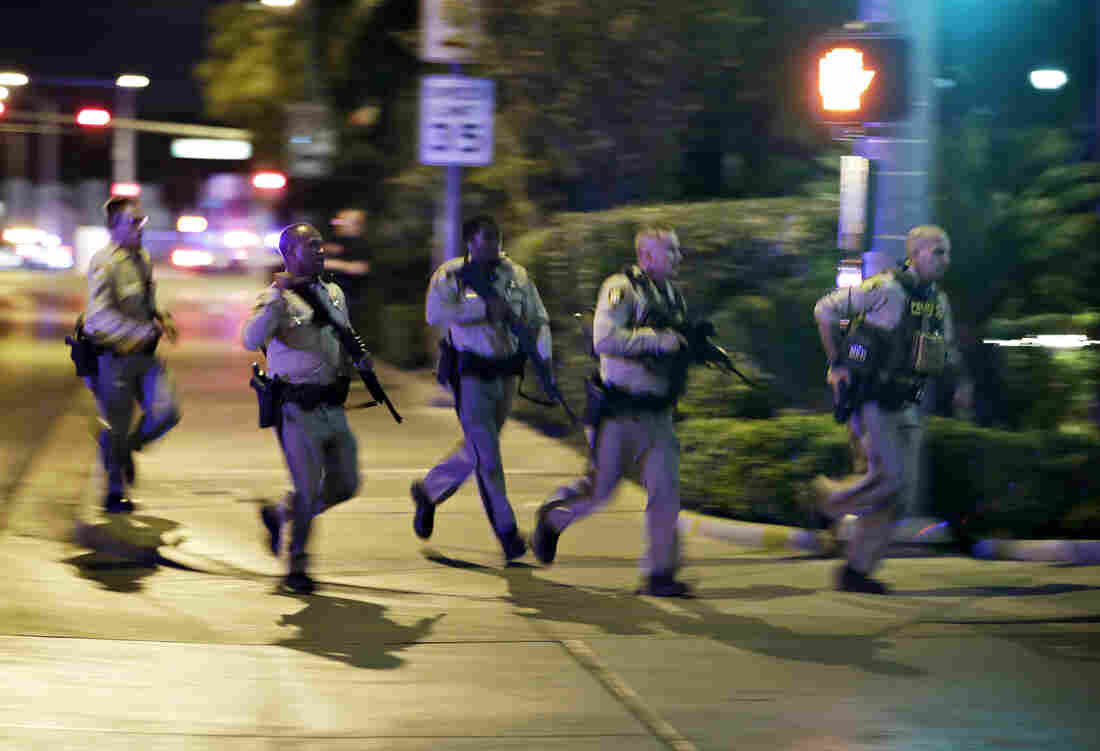 Police run to cover at the scene of Sunday night's mass shooting in Las Vegas. In the opening moments of the shooting, details were sparse and confusion ran high — all while the bullets rained down. John Locher/AP hide caption 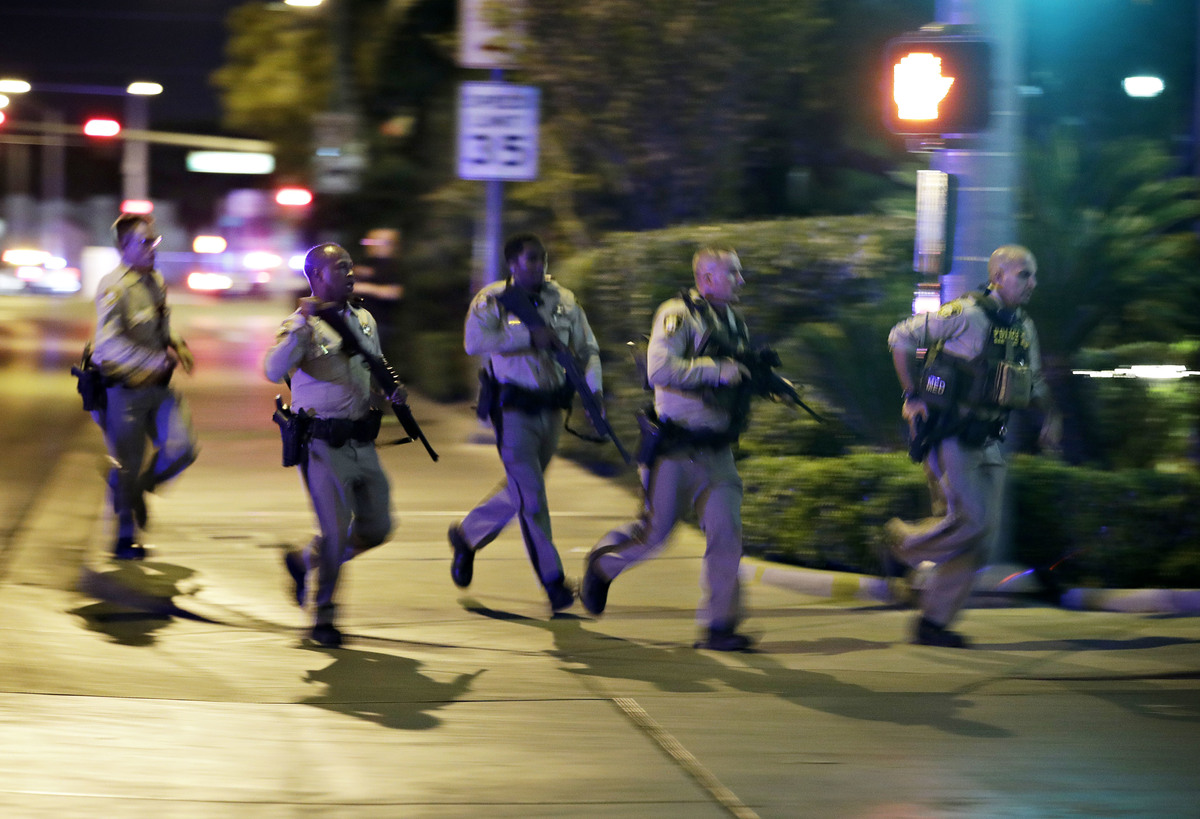 Police run to cover at the scene of Sunday night's mass shooting in Las Vegas. In the opening moments of the shooting, details were sparse and confusion ran high — all while the bullets rained down.

It took just over an hour.

At about 10:08 p.m. local time Sunday, the first reports of gunfire surfaced on dispatch radio for the Las Vegas Metropolitan Police Department. By about 11:20 p.m., law enforcement had used explosives to bust down the door of a hotel room in Mandalay Bay, where they would soon report their suspect dead, surrounded by firearms.

In the horrific interval between — and for a confusing time afterward — there were calls for medical help, attempts to protect panicked civilians and conflicting reports of active shooters across the city. The radio dispatches reveal a battered police force struggling to save dozens of victims at the Route 91 Harvest music festival — and to figure out who, exactly, was raining bullets down upon them.

At the same time, the dispatches do not reveal everything. Gaps and unanswered questions beneath the eddy of voices. Even the compilation of body cam footage released Tuesday night provides an incomplete, although dramatic picture. Some of the views are obscured by the darkness, obstacles or even articles of clothing.

Las Vegas Mass Shooting Latest: Who Are The Victims?

What you'll find below is the audio of the Las Vegas police response to Sunday's massacre, as archived and hosted in the creative commons by a service called Broadcastify, which says the recording is unedited. The audio is divided into half-hour chunks, taking the listener from the opening moments to the immediate aftermath.

Below that audio, you'll also find notable quotes from the response as it unfolded, time-stamped by approximation and arranged in the order they were reported.

In the first half-hour of the attack, law enforcement came to grips quickly with the enormity of the situation. The search for the source of the gunfire proved more difficult, impeded by conflicting reports and the need to treat the concertgoers hit with the attack.

Even as police progressed toward the suspect, one frustrated officer's statement made plain their difficult choice: "We can't worry about the victims!" he shouted. "We have to stop the shooter before we have more victims!"

Here, police move steadily to clear the floors in Mandalay Bay where they believe the attack is coming from, even as there are indications in the audio that the gunfire has stopped. After a flurry of communications, one officer notes he has not heard gunshots for a while.

On Tuesday afternoon, Las Vegas Sheriff Joseph Lombardo told reporters what officers appear to have had trouble discerning in the chaos: Shots were fired for approximately nine minutes. 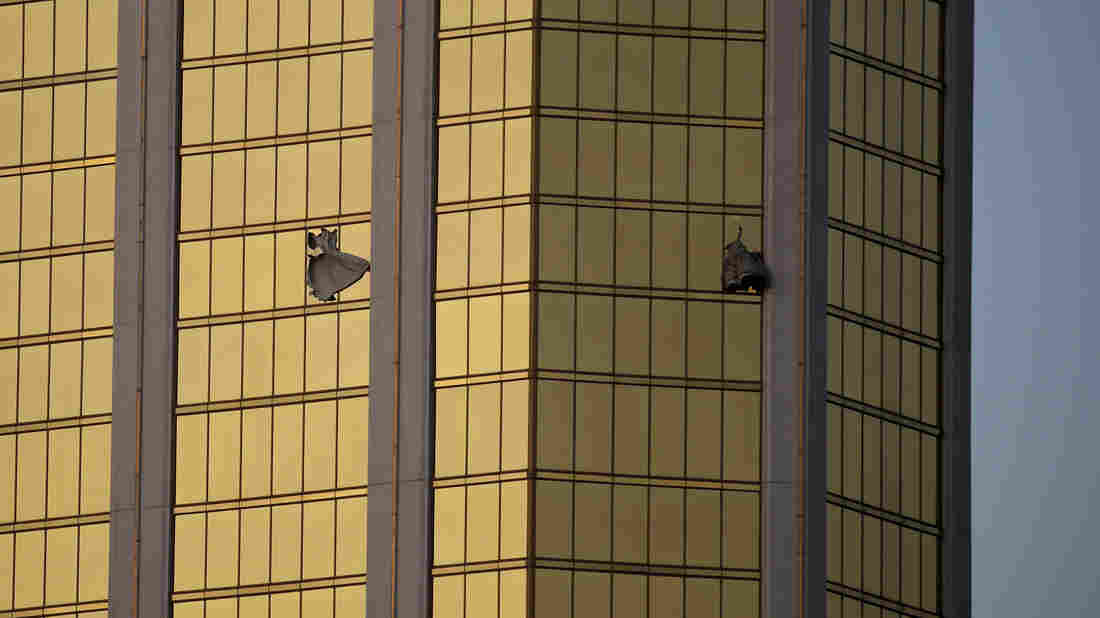 In this photograph taken the morning after the shooting, drapes billow out of broken windows at Mandalay Bay in Las Vegas. Officials say Stephen Craig Paddock had an unobstructed view to rain gunfire on the crowd at the Route 91 Harvest music festival Sunday night. John Locher/AP hide caption 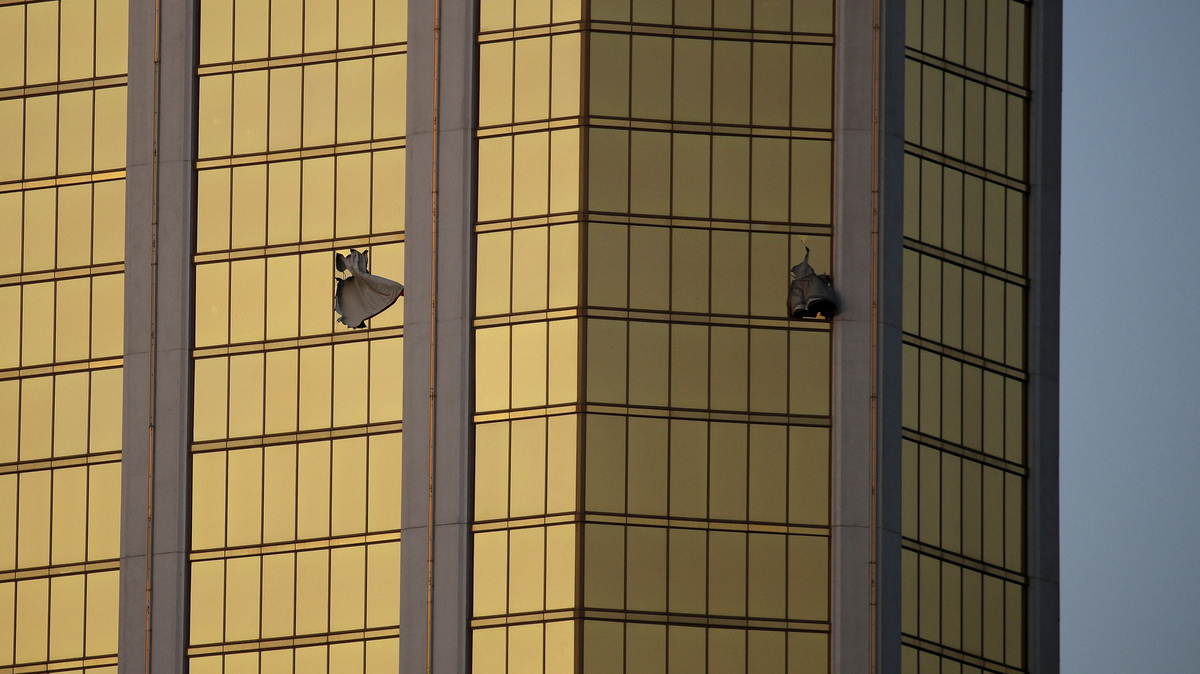 In this photograph taken the morning after the shooting, drapes billow out of broken windows at Mandalay Bay in Las Vegas. Officials say Stephen Craig Paddock had an unobstructed view to rain gunfire on the crowd at the Route 91 Harvest music festival Sunday night.

It is at this point that the search for the shooter comes to a head. Officers approach the target, then knock down the suspect's room with explosives, calling: "Breach, breach, breach." On the other side of that explosion, officers report "one suspect down" with a cluster of firearms.

At the same time, the channel becomes flooded with reports of shots fired in no fewer than a half-dozen casinos across the Las Vegas Strip. These reports would be knocked down one by one, as strike teams deployed to each location and found no such thing.

As the clock nears and rounds midnight, the officers in the gunman's room begin to turn up clues — including his address and the name of a possible person of interest. Meanwhile, officers across the city struggle to vet and investigate a series of active shooter reports.