Accessibility links
Las Vegas Shooter's Life Comes Into Focus, But Not His Motive : The Two-Way Those who knew Stephen Paddock say they can't believe he committed that terrible act. And investigators have yet to identify any sort of grievance that might have motivated his crime. 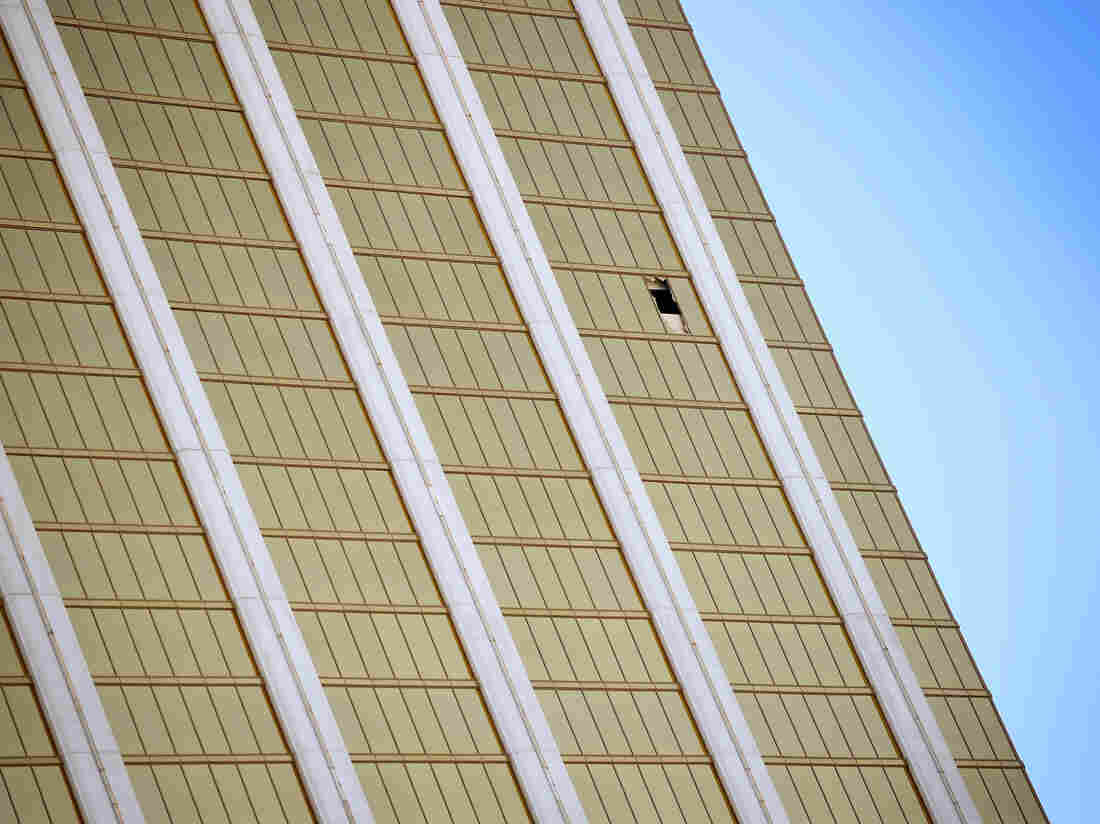 A broken window is seen at the Mandalay Bay Resort & Casino on Wednesday along the Las Vegas Strip. Investigators still don't understand why the shooter carried out his rampage. David Becker/Getty Images hide caption 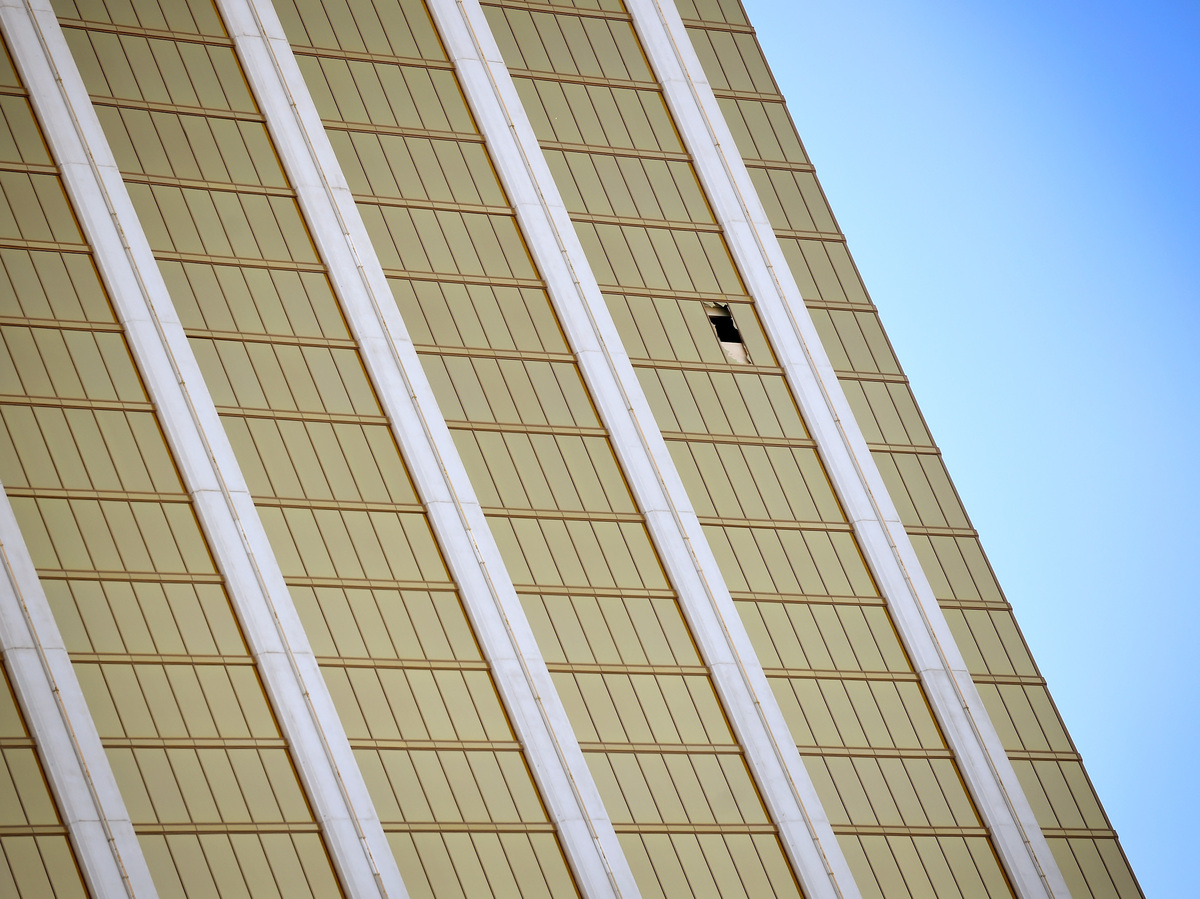 A broken window is seen at the Mandalay Bay Resort & Casino on Wednesday along the Las Vegas Strip. Investigators still don't understand why the shooter carried out his rampage.

Investigators in Las Vegas are sifting through evidence they've gathered from the homes of the man who sprayed a concert crowd with gunfire. They've begun to interview his girlfriend. They've learned quite a bit about Stephen Paddock's past and preparation, but there is still no explanation for why he damaged and destroyed so many lives.

Shooter May Have Considered Other Targets In Chicago And Las Vegas

Ken Russell is a retired wildlife biologist who lives in the same neighborhood where the Las Vegas shooter lived, in the sunny retirement community of Sun City Mesquite. That the carnage on Sunday night was carried out by someone living there was a shock, he said.

"This is a quiet neighborhood," Russell said on Monday, as he walked among palm trees, cacti and houses of stucco and tile. "All of them up here in Sun City are quiet. People are too old to make any commotion."

That was the first surprise for investigators: that a 64-year-old man, an apparently wealthy retiree, a former postal worker, IRS agent and government auditor, would commit mass murder. He doesn't fit the mass shooter profile.

Others in Mesquite spotted Paddock playing cards and video poker in the local casinos, betting and winning big, stopping in at the community center, or picking up coffee at Starbucks.

His younger brother also said he was puzzled by the rampage. 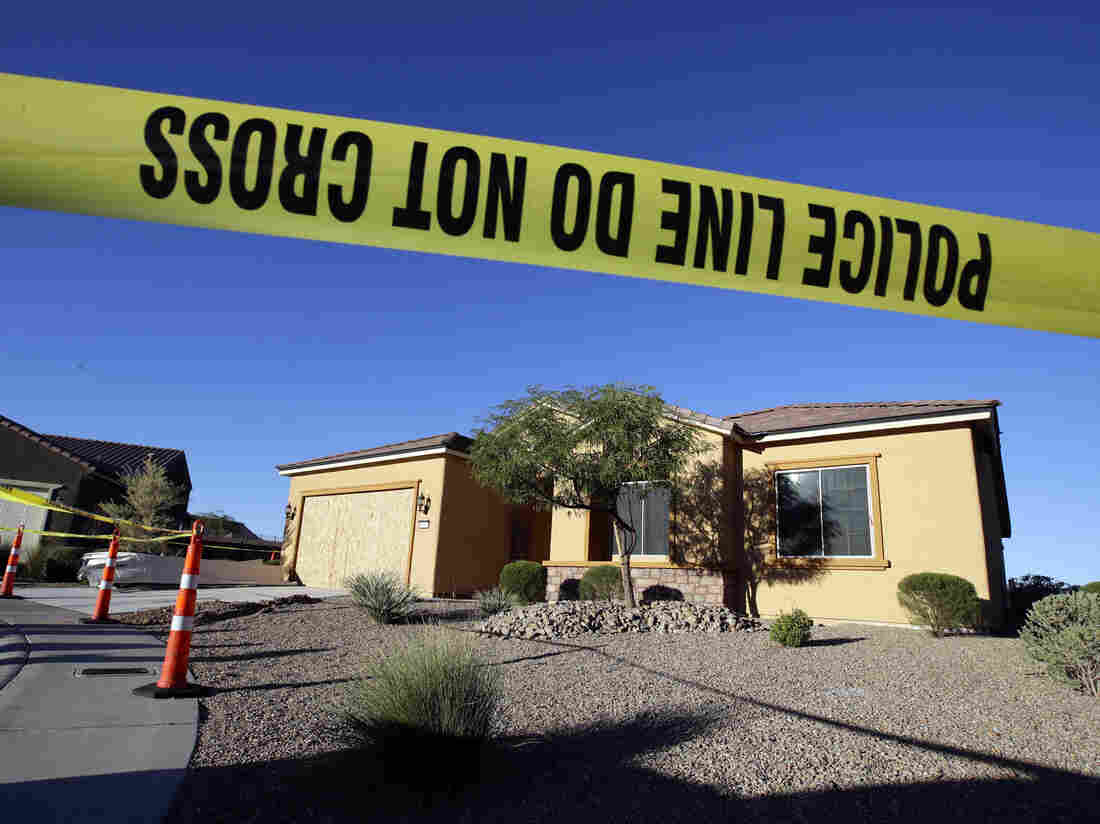 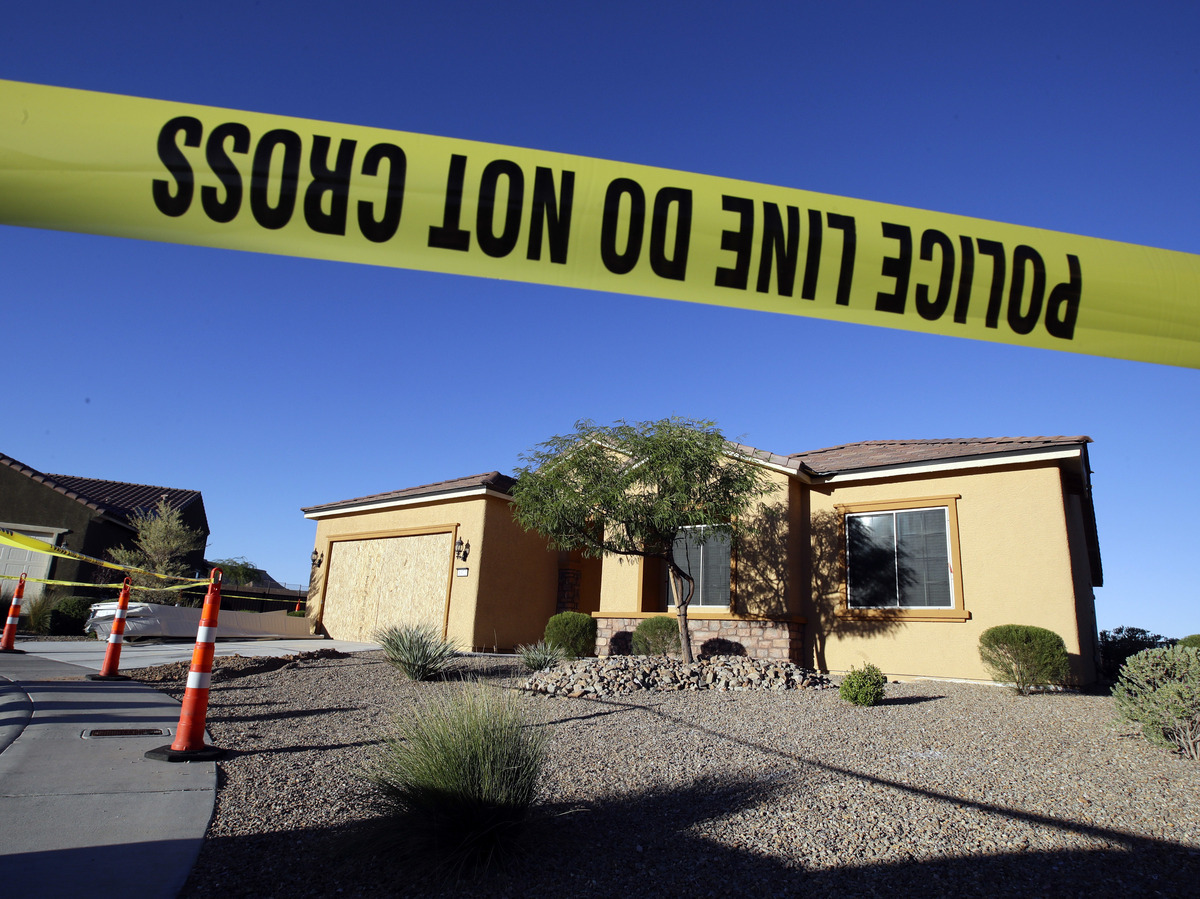 Police tape blocks off the shooter's home in Mesquite, Nev., on Monday.

"That he did what he did, it just doesn't compute," he said.

The shooter made millions in investments in real estate, according to public records in California, Nevada, Texas and Florida.

And he loved gambling and guns. Paddock had elite status at bigger casinos in Las Vegas, according to industry sources who insisted on anonymity to protect their jobs. Police say he bought dozens of guns and thousands of rounds of ammunition and explosives typically used for target shooting.

Three times earlier this year, he drove the 40 miles from Mesquite to St. George, Utah, to Dixie GunWorx, where gun seller Chris Michel found him more engaging than most.

"He came in and everything he wore, his demeanor, the person that he was, the openness, with his personality," said Michel. "He was the guy next door that would, you know, mow people's lawns for you. He would be the guy handing out ice cream cones on the corner when the bus comes to a stop to the kids. He would be the one that all of us would have taken to the family barbecue and invited. He just, he was an open guy to us."

Paddock easily passed the background checks he needed to buy a shotgun from Michel and other weapons from other dealers. So far, police have revealed no evidence of illegal possession of firearms. Some neighbors in Nevada, Texas and Florida who've spoken with reporters, simply say Paddock and his girlfriend kept to themselves, and didn't do anything alarming.

"He was very trusting to complete strangers," said Sharon Judy, who lived next door to the home Paddock owned in Melbourne, Fla. She says he handed her a key, asking her to keep an eye on the house and borrow any tools she might be able to use.

Why Did He Do It? Authorities Still Baffled By Vegas Shooter

"It's really scary to think this is a guy next door," she told NPR's Pam Fessler. "Perfectly normal. On nobody's radar. Nobody's reason to think anything of any of it. And then all of a sudden he goes out and does something like this."

At a news conference Friday afternoon, Undersheriff Kevin McMahill said authorities had looked into more than 1,000 leads in the case. "While some of it has helped create a better profile into the madness of this subject, we still do not have a clear motive or reason why," he said.

VIDEO: @Sheriff_LVMPD provides an update, including a detailed timeline of the incident that occurred on Oct 1. https://t.co/wo8LVCxkjX

Paddock used Airbnb to rent a condo in a downtown Las Vegas high-rise during a different music festival the weekend before he fired upon the Route 91 Harvest festival. And someone named Stephen Paddock booked a room at a Chicago hotel overlooking Grant Park during Lollapalooza there in August, though the hotel says no one by that name actually stayed at the hotel then.

Two law enforcement officials tell NPR that an analysis of Paddock's electronic devices show he researched hotels around Fenway Park and a site in downtown Boston.

"What we know is Stephen Paddock is a man who spent decades acquiring weapons and ammo, and living a secret life, much of which will never be fully understood," Lombardo said on Wednesday. 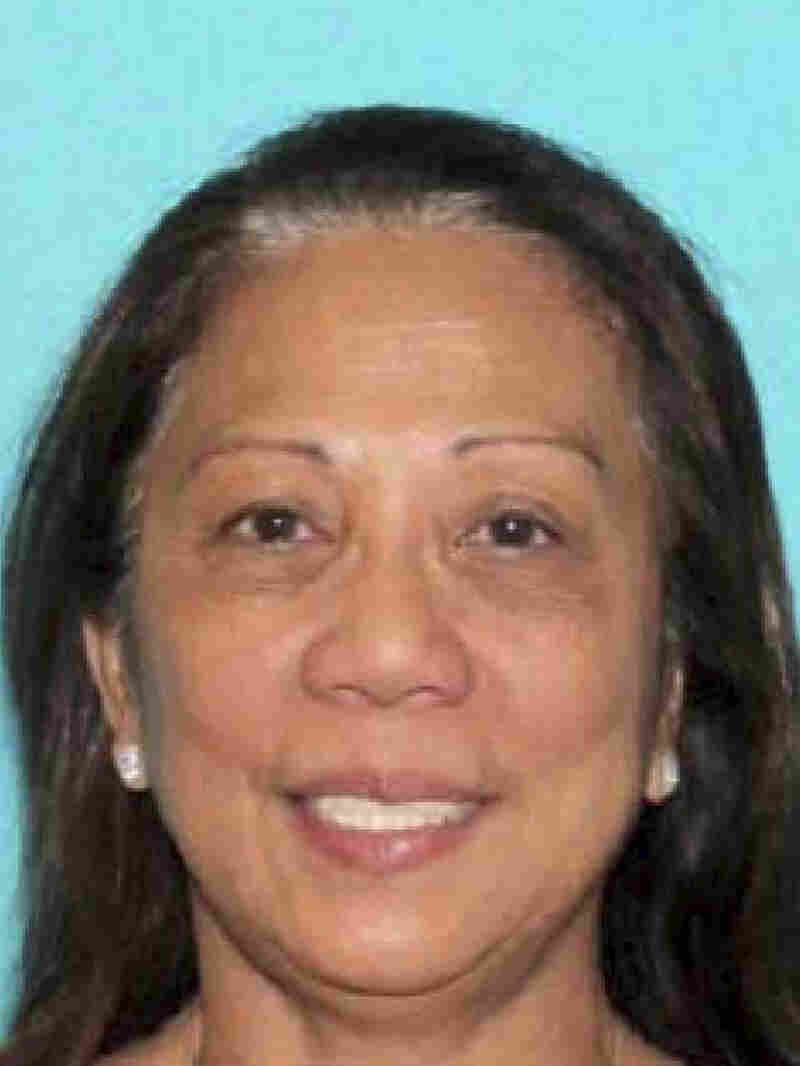 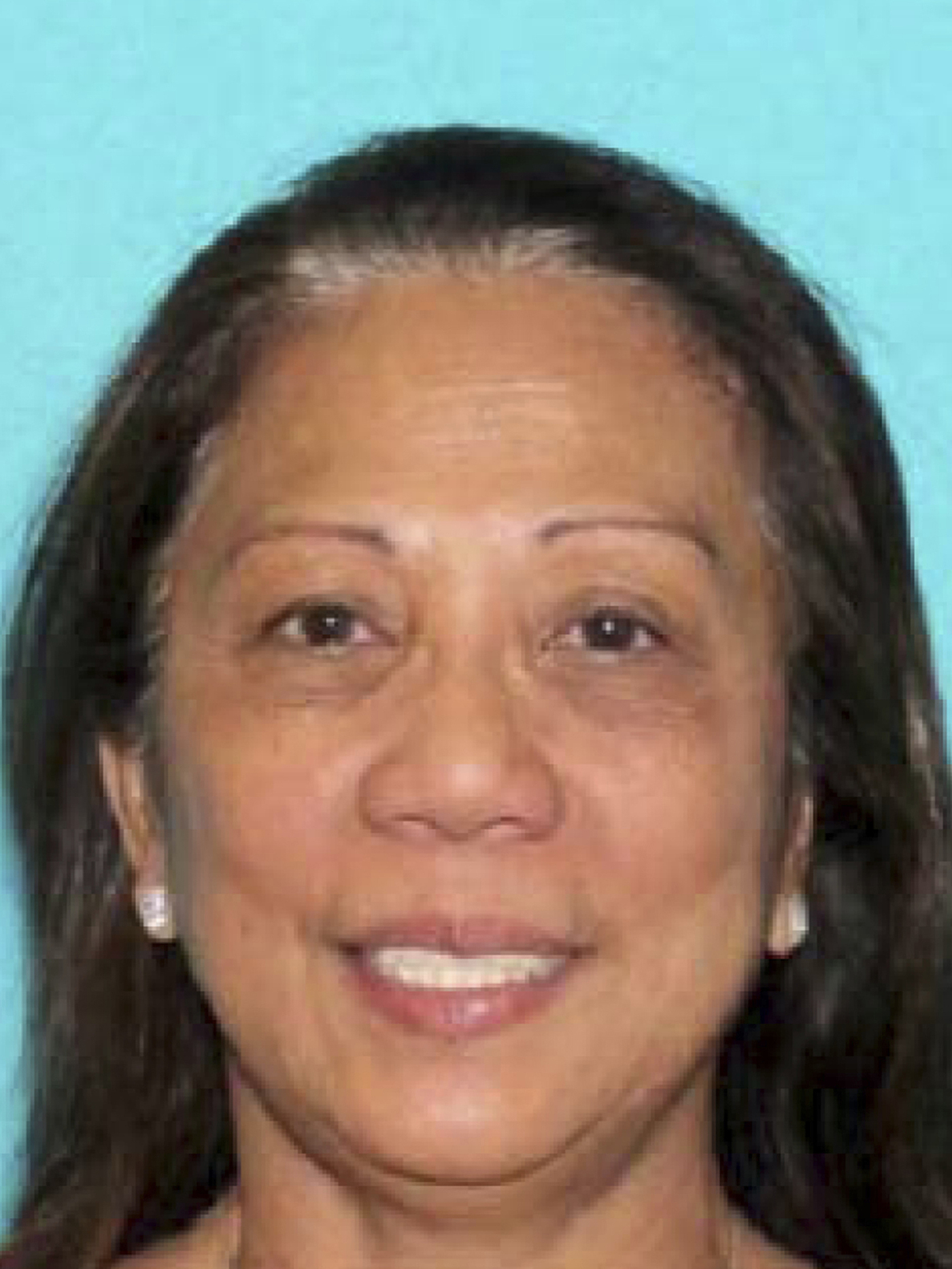 The sheriff speculated that the shooter may have had an accomplice: "You've got to make the assumption he had to have some help at some point."

Undersheriff McMahill was asked Friday to clarify whether an accomplice was involved. "I can tell you this: we are very confident there was not another shooter in that room. What I cannot confirm to you today — and that we continue to investigate — is if anyone else knew about it before he carried it out," he said.

The shooter's girlfriend, Marilou Danley, said she had no hints of the rampage. Her attorney, Matthew Lombard, read a statement from Danley, which said in part:

"I knew Stephen Paddock as a kind, caring, quiet man. I loved him and hoped for a quiet future together with him. He never said anything to me or took any action that I was aware of, that I understood in any way to be a warning that something horrible like this was going to happen."

"A little more than two weeks ago, Stephen told me he found a cheap ticket for me to the Philippines and that he wanted me to take a trip home to see my family. Like all Filipinos abroad, I was excited to go home and see family and friends. While there, he wired me money, which he said was for me to buy a house for me and my family. I was grateful, but honestly, I was worried that first, the unexpected trip home, and then the money, was a way of breaking up with me. It never occurred to me in any way whatsoever that he was planning violence against anyone."

This apparent silence, the secret life, also defies another characteristic of mass shooters, says Dr. Reid Meloy, a forensic psychologist at the University of California San Diego Medical School. Meloy's research shows that some kind of grievance — big or small — can be a triggering event. The grievance can spiral into planning and preparing some kind of response.

"That's of course the mystery in this particular case is that there doesn't yet seem to be any grievance that's surfaced," says Meloy.

The secretive planning and preparing for the response can end up overshadowing the grievance as it becomes its own motivation. And Meloy says research shows that mass shooters often fuel their excitement by telling somebody something of their plans.

"A number of studies have found that a majority of these individuals that carry out mass murders will communicate their intent to a third party before they do it," he says. "There is at least one person that knows the path that this individual is on. There does not seem to be any evidence of that yet in this case which would be an anomaly."

That's an assessment shared by the sheriff on Wednesday.

"Anything that would indicate this individual's trigger point and that would cause him to do such harm — we haven't understood it yet," said Lombardo.

Four days after the shooter carried out his meticulous plan, investigators have learned some things about Stephen Paddock. But still not enough to make sense of his terrible crime.