Accessibility links
South Spared Widespread Devastation As Hurricane Nate Becomes Tropical Depression : The Two-Way Hurricane Nate, initially expected to hit Southern states as a Category 2 storm, has been downgraded to a tropical depression. It made landfall near Biloxi, Miss., over the weekend. 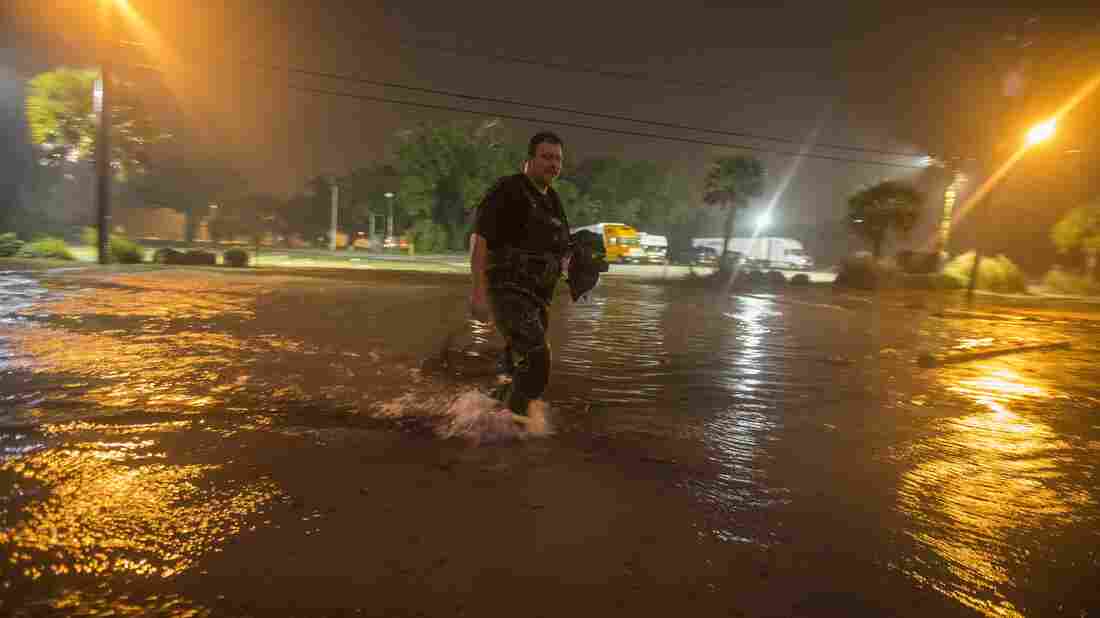 Lanny Dean takes video as he wades along a flooded Beach Boulevard next to Harrah's Casino as the eye of Nate pushes ashore in Biloxi, Miss., early Sunday. Mark Wallheiser/Getty Images hide caption 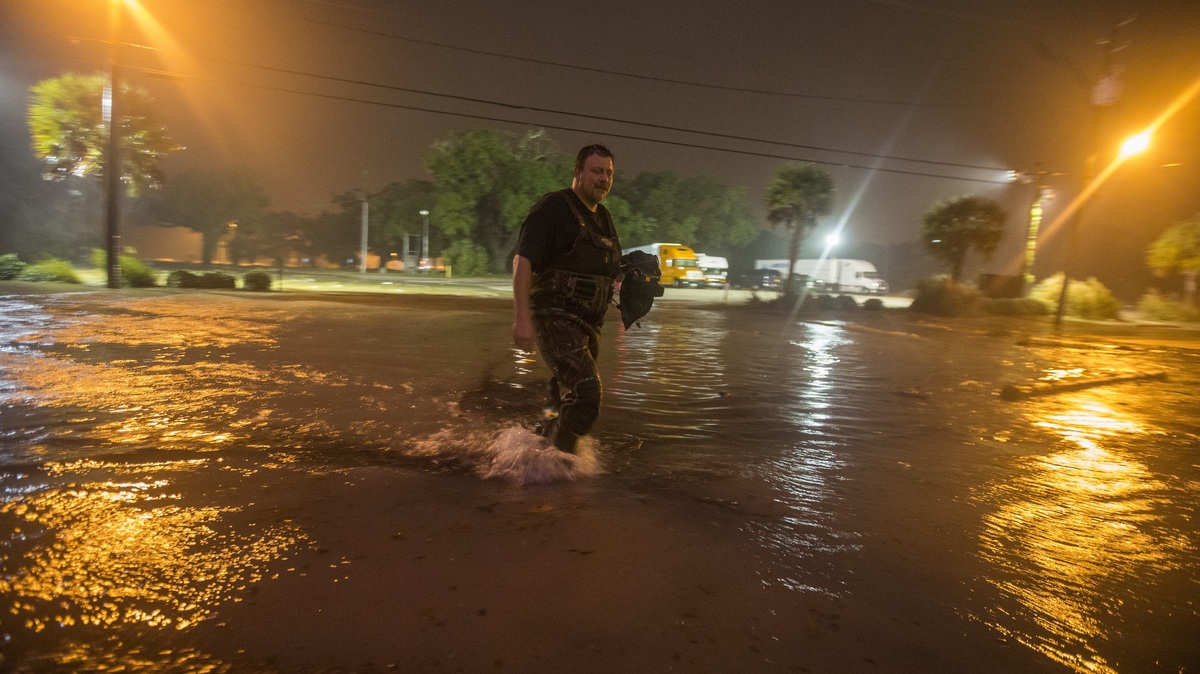 Lanny Dean takes video as he wades along a flooded Beach Boulevard next to Harrah's Casino as the eye of Nate pushes ashore in Biloxi, Miss., early Sunday.

Hurricane Nate is a hurricane no more.

It is now a tropical depression, dousing the Deep South, Tennessee Valley and central Appalachian Mountains with heavy rains, expected to continue through Monday.

Nate first struck near the mouth of the Mississippi River on the southeastern Louisiana coast as a Category 1 storm Saturday night and again near Biloxi, Miss., early Sunday morning.

After several hours of heavy rainfall, the National Hurricane Center downgraded the tropical storm to a tropical depression and has subsequently discontinued all hurricane and storm surge warnings and watches.

Tropical storm-force wind gusts are expected over the Florida Panhandle and portions of Alabama and Georgia through Sunday, the NHC said. Portions of the northern Gulf Coast continue to experience elevated water levels but were expected to gradually subside Sunday afternoon.

Nate was downgraded to a tropical storm, hours after it made landfall near the city of Biloxi, Miss.

Videos and photos from Biloxi show water inundating parts of the city.

Water is expected to rise by 5 to 8 feet between the Mississippi-Alabama border to the Alabama-Florida border, including Mobile Bay, Ala.

Photographer Mike Theiss posted video on Twitter of what he said was the flooded interior of Biloxi's Golden Nugget casino.

Wesley Williams of WLOX wrote that power had been knocked out in downtown Biloxi by the forceful winds.

Pictures and videos show parts of U.S. Route 90, which runs east and west along much of the Gulf Coast, completely submerged.

The Associated Press reports that Nate is the first hurricane since 2005's Hurricane Katrina to make landfall in Mississippi.

But Katrina is better known for causing the widespread destruction of New Orleans in neighboring Louisiana that year. This time, New Orleans, which is about 90 miles to Biloxi's west, appeared to miss the brunt of the storm. Mayor Mitch Landrieu had imposed a curfew on the city but lifted it when the National Weather Service canceled a hurricane warning for the area. City officials still cautioned residents to take shelter from heavy winds.

The situation was different to Biloxi's east. Mobile, Ala., experienced flooding of its own.

Adam Olivier of Fox10 tweeted what he said was water inundating downtown Mobile.

Surge pushing up Water and spilling onto the end of Dauphin St. This is right by the convention center in downtown. pic.twitter.com/EoEB00BQRw

At 2:15 a.m. local time Sunday, the National Weather Service of Mobile measured water surges of 5.6 to 5.7 feet at locations near the city.

The NHC said Nate will "quickly weaken as it moves farther inland" and "should degenerate into a remnant low late Monday."