Accessibility links
One Week Later, Las Vegas Moves From Response To Recovery : The Two-Way The city isn't back to business as usual just yet. But authorities are trying to provide victims and festival attendees with whatever support they need, from counseling to legal aid. 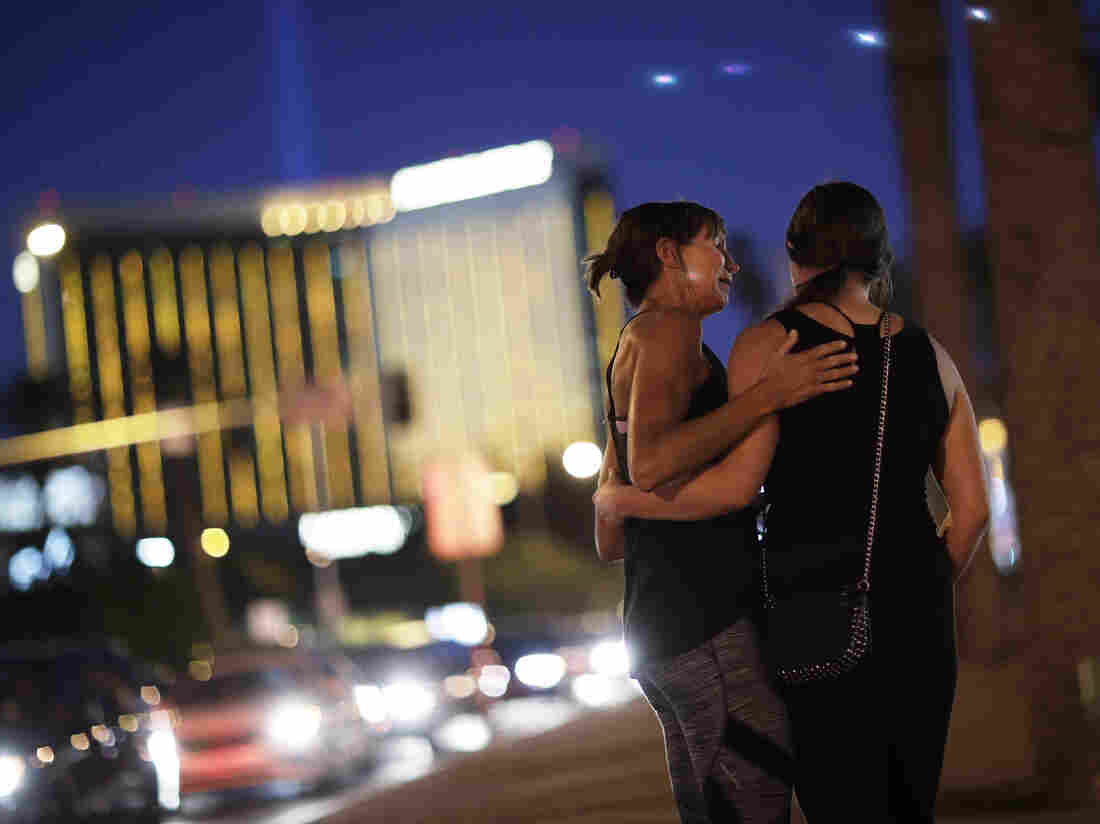 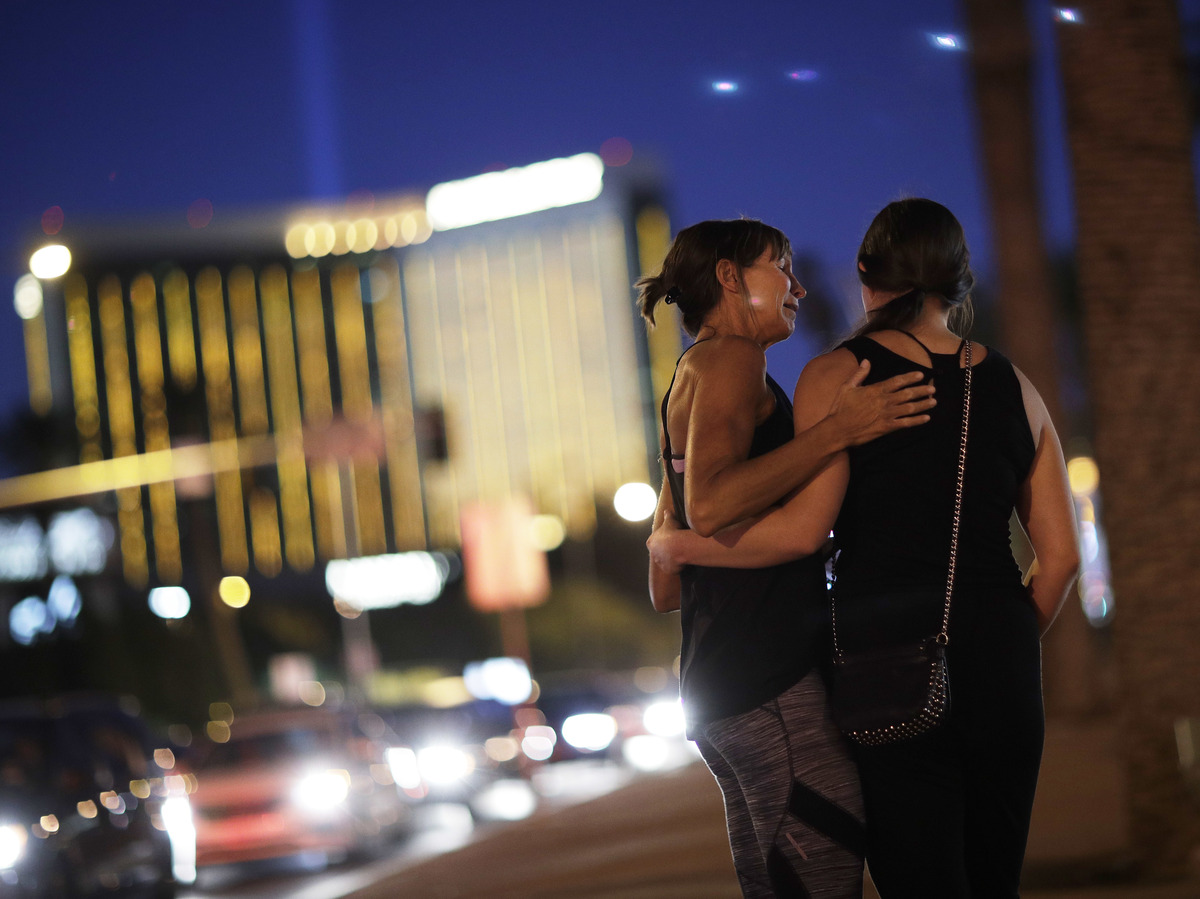 Madisen Silva, right, and Samantha Werner embrace on Friday at a makeshift memorial for victims of a mass shooting in Las Vegas. A gunman opened fire on an outdoor music concert last Sunday, killing 58 and injuring hundreds.

A week after the shooting that took 58 lives and changed many more, Las Vegas is picking up the pieces.

For the first time since the barrage of gunfire tore through the Route 91 Harvest Festival last Sunday night, some of those who attended the event can pick up belongings that were left behind as they fled for safety.

Pence In Las Vegas: 'We Are United In Our Resolve To End Such Evil'

"The sheer size of the space and the amount of personal items that were left there, it's just a huge undertaking," said Paul Flood, Unit Chief in the FBI Victim Services Division. He said the items included purses, wallets, cell phones, and chairs: "Whatever was dropped when people started running."

The FBI and the Nevada Attorney General's office is coordinating the return of those items. At a press conference Sunday, Clark County officials distributed maps of the festival site, with letters A through F assigned to different areas. Items left behind in Area A can now be picked up at the family assistance center at the Las Vegas Convention Center.

Las Vegas authorities are allowing people to return to ONE section of the concert site to retrieve belongings from last Sunday. #LasVegas pic.twitter.com/BRqAiBFTUp

Authorities said they had collected and transported seven truckloads of personal items just from Area A. 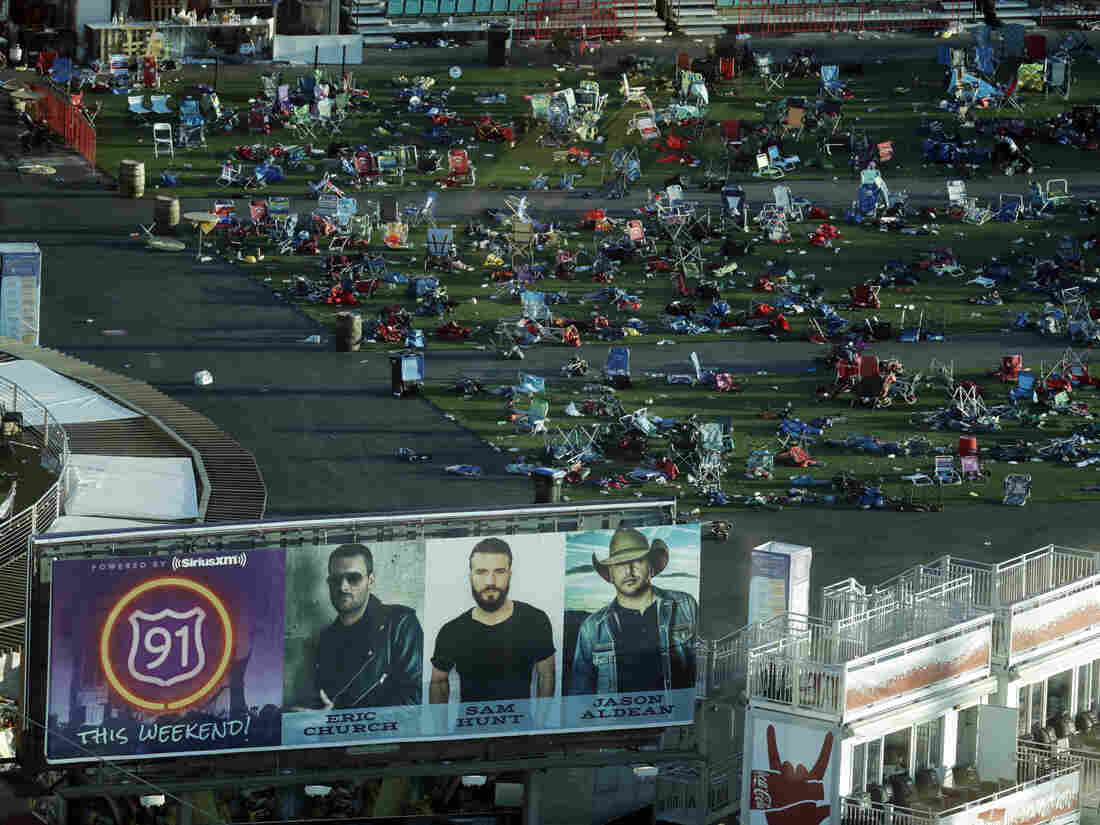 Personal belongings and debris litter the Route 91 Harvest Festival grounds on Tuesday in Las Vegas. Authorities said on Sunday that some items can now be returned to their owners. Marcio Jose Sanchez/AP hide caption 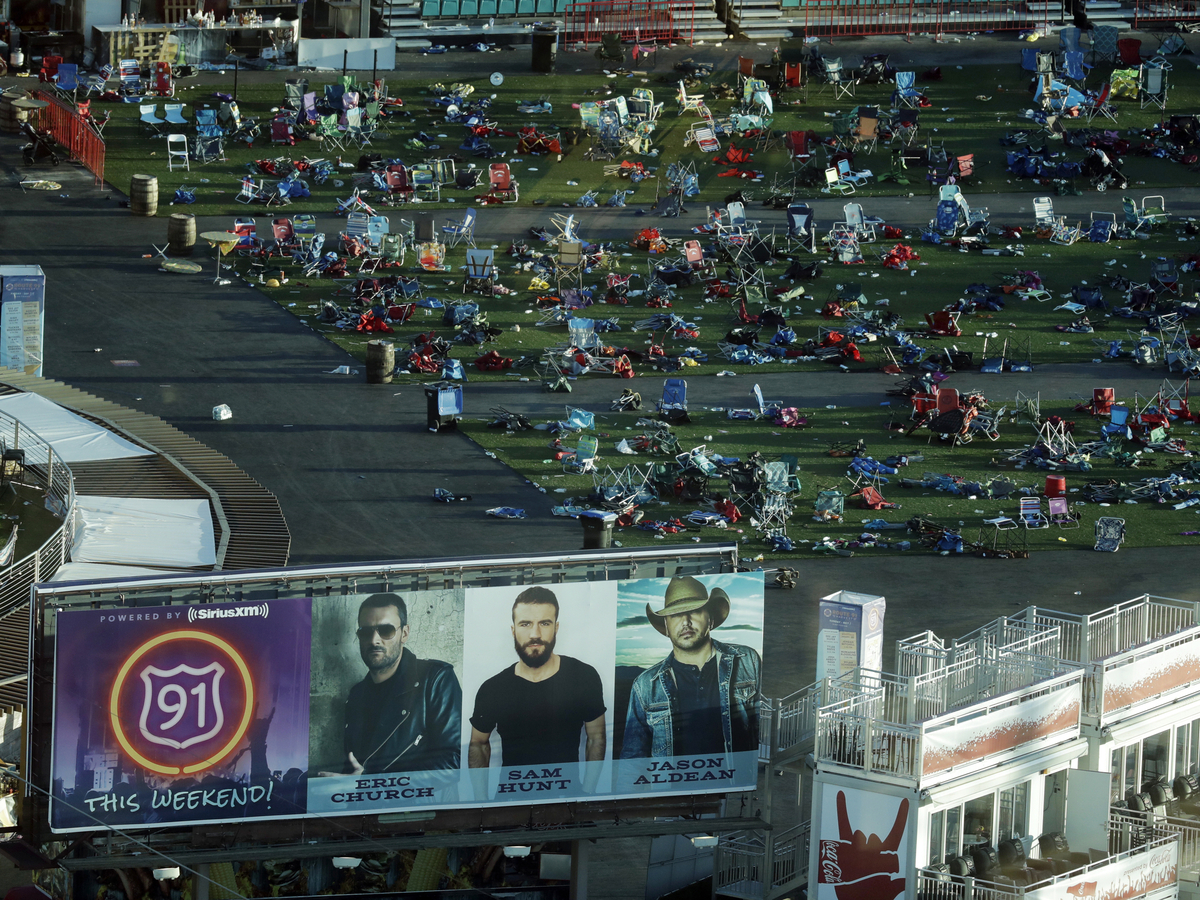 Personal belongings and debris litter the Route 91 Harvest Festival grounds on Tuesday in Las Vegas. Authorities said on Sunday that some items can now be returned to their owners.

"We're past the response portion of this terrible incident. This is all about recovery now," said Clark County Deputy Chief John Steinbeck, who also serves as the county's emergency manager. "It's going to be a very, very long process. But we want to work as hard and as focused as we can on it, and help the people that are in need for recovering from this, and heal together as a community."

Steinbeck said that the family assistance center, which was first set up to help the families of those killed in the attack, was now shifting to meet the needs of anyone who attended the festival – whether that means counseling, financial assistance, or legal aid.

"We're simply here to serve you in what you need, and not in what we think you need," he said.

NPR's Sarah McCammon reports that a lawyer for one of the victims of the shooting has filed court papers to freeze the assets of the shooter, Stephen Paddock. Paddock killed himself as police closed in.

The attorney, Richard Chatwin, represents Travis Phippen, who was wounded in the arm during the festival. His father, John Phippen, died in the shooting. In the court filings, Chatwin asked the Clark County public administrator to take control of Paddock's assets, including his home in Mesquite, Nevada.

"We need someone sooner than later to secure the assets of Mr. Paddock," Chatwin told the Las Vegas Review-Journal. "It's unlikely we're going to have anyone else who could manage Mr. Paddock's estate step up and be willing to do so."

Paddock's younger brother, Eric, told the newspaper that he would like to take control of the assets and handle disbursement to victims.

Country star Jason Aldean, who was performing at the festival when the shooting began, appeared last night on Saturday Night Live. He sang "I Won't Back Down," by Tom Petty, who died Monday of cardiac arrest.

"Like everyone, I'm struggling to understand what happened that night," Aldean said. "You can be sure that we're going to walk through these tough times together every step of the way. Because when America is at its best, our bond and our spirit — it's unbreakable."