Accessibility links
Nobel Goes To American Richard Thaler For Work In Behavioral Economics : The Two-Way The Swedish Academy said it was awarding Thaler the prize in economics for his pioneering work in incorporating "psychologically realistic assumptions into analyses of economic decision-making." 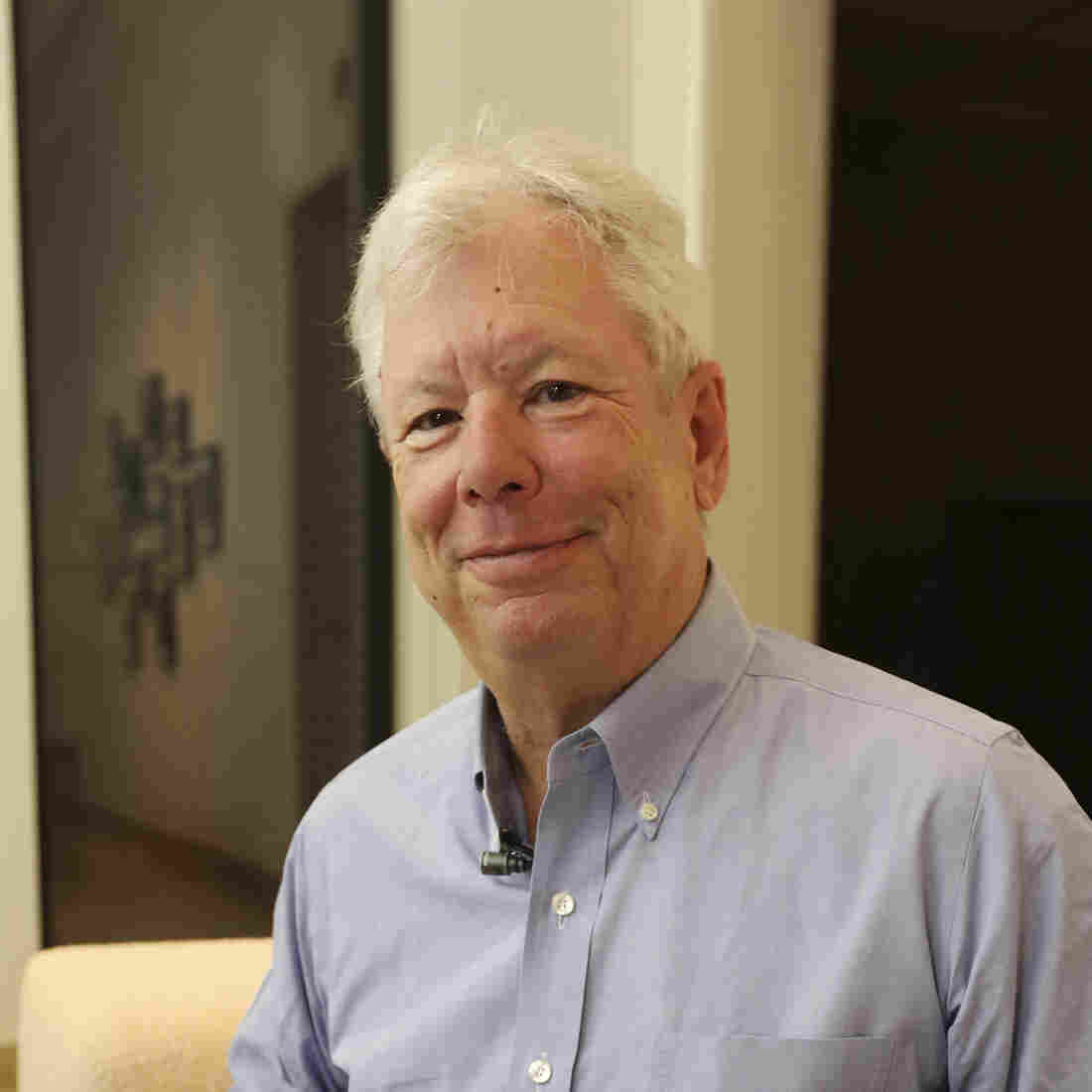 In this photo provided by the University of Chicago, Richard Thaler poses for a photo with his books at his home in Chicago after winning the Nobel prize in economics, on Monday. Anne Ryan/AP hide caption 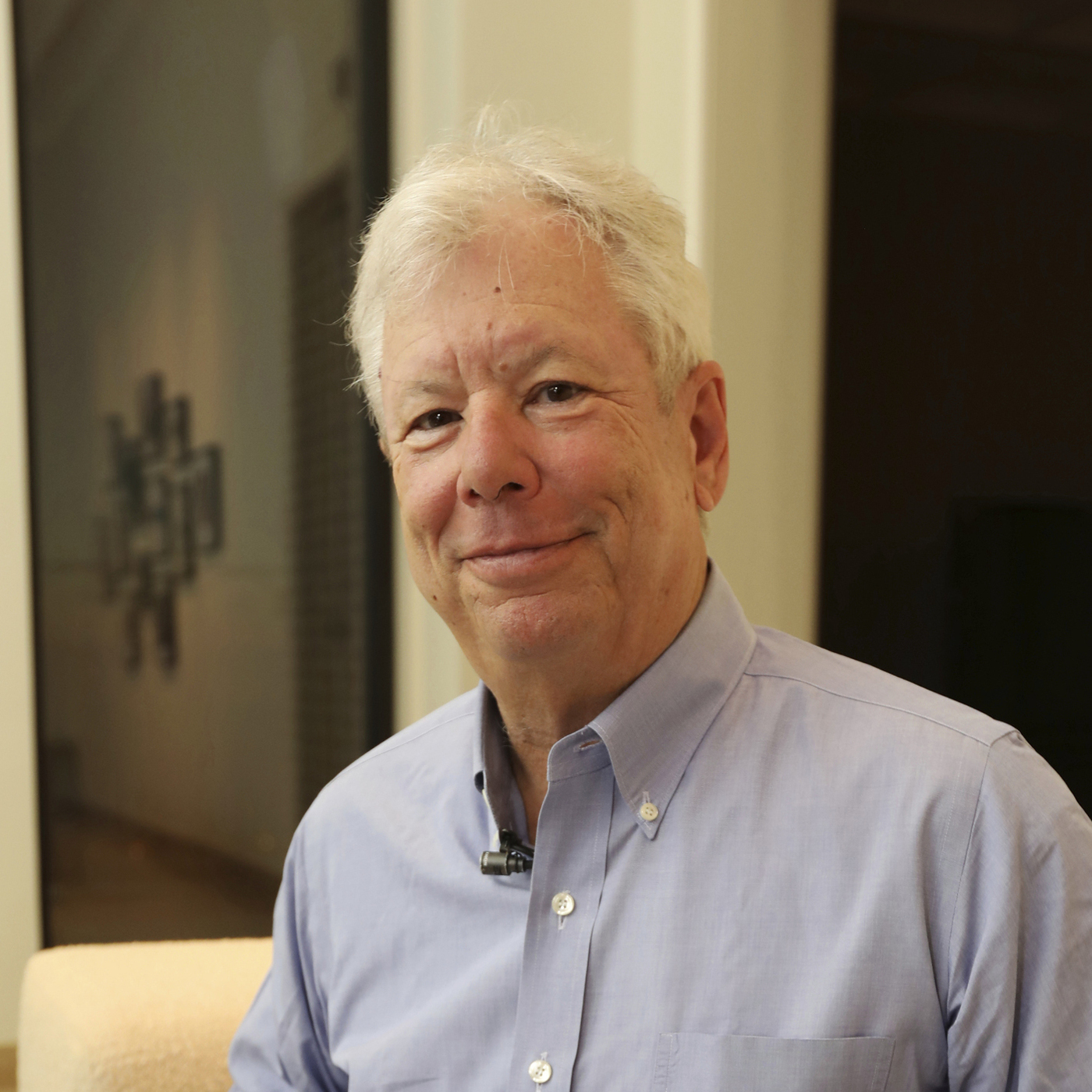 In this photo provided by the University of Chicago, Richard Thaler poses for a photo with his books at his home in Chicago after winning the Nobel prize in economics, on Monday.

The 2017 Nobel Prize in Economic Sciences has been awarded to Richard Thaler of the University of Chicago for his pioneering work in behavioral economics.

The announcement from the Royal Swedish Academy of Sciences in Stockholm said the 72-year-old Thaler "has incorporated psychologically realistic assumptions into analyses of economic decision-making. By exploring the consequences of limited rationality, social preferences, and lack of self-control, he has shown how these human traits systematically affect individual decisions as well as market outcomes," the committee said in a statement.

The relatively new field of behavioral economics studies the effects of psychological, social, cognitive and emotional factors on economic decision-making.

"Human behavior is very complex. So, if we want to construct useful models of economic behavior, we have to make simplifications. One such simplification which has been very important in economics is the assumption that humans behave in a fully rational way and make economic decisions in a way as to maximize their own well-being," Per Strömberg, chairman of the prize committee, said.

Over time, Strömberg said, researchers have gathered more evidence from psychology on how humans deviate from rational economic decisions. "Richard Thaler is a pioneer when it comes to incorporating such insights from psychology into economic analysis," he said.

"Thanks to his contributions and discoveries, this new field [of behavioral economics] has gone from being sort of a fringe and somewhat controversial part of economics to being a mainstream area of contemporary economic research," the chairman of the prize committee said.

Speaking from his home in the United States to a news conference at the Royal Academy, Thaler said he felt the most important impact of his work was "the recognition that economic agents are human."

Thaler is the author of the books Nudge and Misbehaving: The Making of Behavioral Economics.

Among Thaler's contributions to the field are his "theory of mental accounting, explaining how people simplify financial decision-making by creating separate accounts in their minds, focusing on the narrow impact of each individual decision rather than its overall effect," the Academy said.

One area singled out by the committee is Thaler's work on retirement savings. He was an early proponent of employers automatically enrolling their workers in 401(k) programs. He also developed a "Save More Tomorrow" retirement plan that encourages people to put future salary increases toward retirement.

Kenny Malone of NPR's Planet Money says Thaler is "a bit of a rock star" in the field of economics.

"In terms of real-world implications, once you start to understand the ways that we are weird, irrational beings, you can structure policies to move people toward the ends that you would want," Malone tells Morning Edition.

Thaler made a cameo in the movie The Big Short, where he explained the "hot-hand fallacy" about the belief that someone who has experienced success in something involving random chance has a greater chance of further success going forward.

Asked whether he thought that applied to President Trump, Thaler responded with a chuckle, "I think he would do well to watch that movie."

When the same Swedish journalist asked what Thaler would do with the 9-million kronor ($1.1 million) monetary portion of the Nobel award, the economist: "I will say that I will try to spend it as irrationally as possible."