Accessibility links
Catalan President Says He Has 'Mandate' For Independence, Calls For Talks With Madrid : The Two-Way Regional leader Carles Puigdemont emphasized the importance of dialogue in a major speech. More than a week ago, the region voted for independence from Spain, in a referendum Madrid considers illegal.

Catalan President Says He Has 'Mandate' For Independence, Calls For Talks With Madrid

Catalan President Says He Has 'Mandate' For Independence, Calls For Talks With Madrid 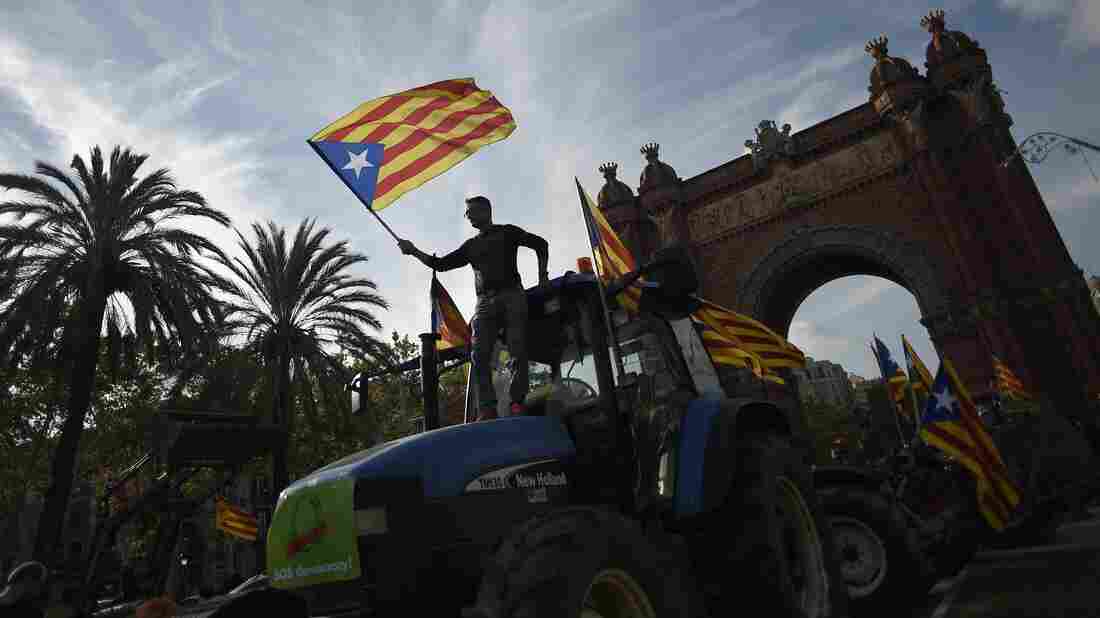 Supporters of Catalan independence wave Catalan flags as they drive with tractors through the Arc de Triomf in Barcelona on Tuesday. Jorge Guerrero/AFP/Getty Images hide caption 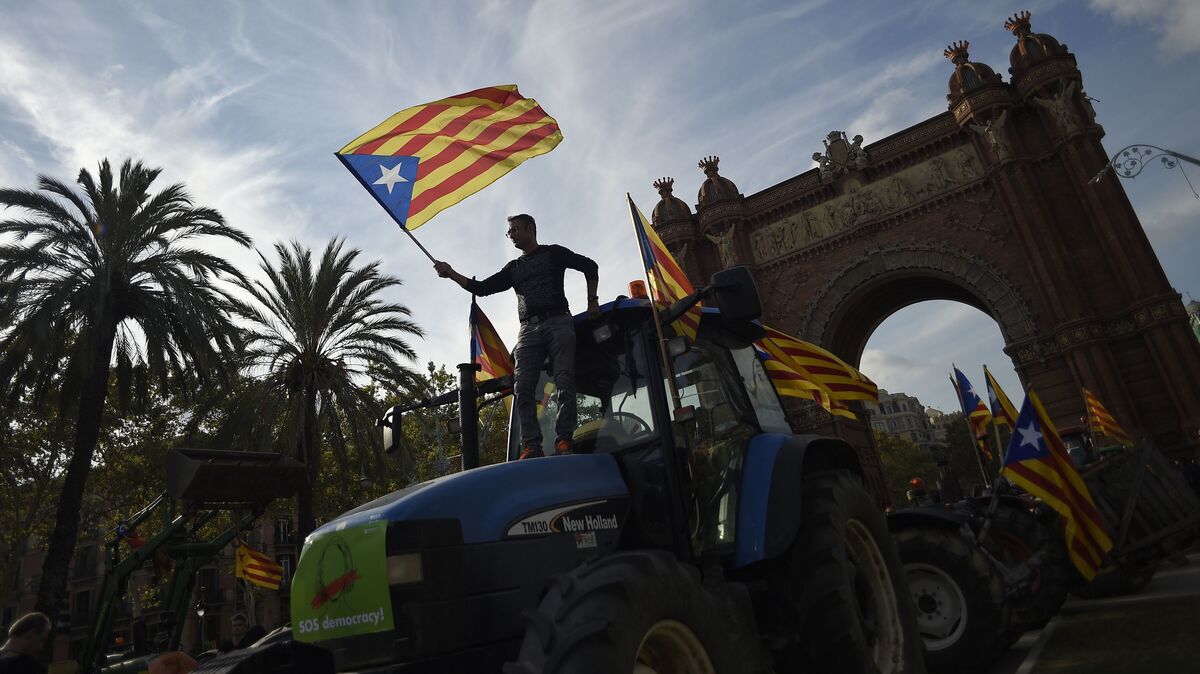 Supporters of Catalan independence wave Catalan flags as they drive with tractors through the Arc de Triomf in Barcelona on Tuesday.

Catalan President Carles Puigdemont, the region's separatist leader, says he has the "mandate" to declare independence from Spain but is delaying such a declaration to allow for talks with Madrid.

In a much anticipated speech to the regional Parliament, more than a week after a referendum on Catalan independence, Puigdemont called for the "de-escalation of tensions" while emphasizing the importance of dialogue.

"I want to follow the people's will for Catalonia to become an independent state," he said, according to a BBC interpreter. But after saying he could declare independence, he said he wanted to suspend any such measure to allow time for negotiations. He said he was open to the possibility of international mediation.

Later on Tuesday, The Associated Press reports, Catalan lawmakers signed a document that declared independence but delayed the implementation of the declaration — exactly what Puigdemont had called for in his speech.

The Oct. 1 independence referendum, organized by the regional government, was not acknowledged by Spain as valid. Puigdemont said it was time for a vote that was recognized by both governments, with both sides committing to accept the results.

He noted that the United Kingdom managed to hold such a vote — the 2014 referendum on Scottish independence, which resulted in Scotland remaining in the U.K.

Puigdemont emphasized the need for dialogue. "I'm not planning any threat, any insults," he said. The government of Spain is fiercely opposed to Catalan separatism and has threatened punitive action if the region declares independence.

Puigdemont's address was delayed by one hour as opposition lawmakers attempted to cancel it. The speech took place amid tight security, The Associated Press reports, with a police cordon around the legislative building.

"It has become obvious that [Catalan independence] is not an internal issue any longer," Puigdemont said, as translated by a BBC interpreter. "Catalonia is now a European matter."

He spoke to the government in Madrid. "We're not criminals," Puigdemont said, as translated by the BBC interpreter. "We're not rebels. We are normal people and we just want to vote."

He thanked Catalan citizens involved in the issue, on every side — including pro-separatist protesters, people marching in support of unity and "those who have not been out in the streets."

"We need to go forward together, whatever happens," he said. "The only way to move forward is democracy and peace."

The semi-autonomous region, which has its own culture and language, held an independence referendum on Oct. 1. The vote — which the Spanish government considered not just illegitimate but illegal — was marred by violence that injured hundreds of people. Spanish police dragged voters out of polling booths and fired rubber bullets on unarmed protesters, while some people threw rocks at officers.

But millions of people voted anyway. Catalan leaders say 90 percent of the ballots were cast in favor of independence. About half of registered voters turned up at the polls, Catalan authorities say.

As Lauren Frayer has reported for NPR, the vote was coordinated by the pro-separatist government and it is impossible to confirm its numbers. And when it comes to voters who sat out the referendum, Frayer says, it's not clear whether they chose not to vote "because they're opposed to independence [or] were intimidated by the violence, or whether they would have voted in a referendum that was legal."

A week after the referendum, supporters of Spanish unity — who don't want Catalonia to declare independence — marched in massive street protests in Barcelona. 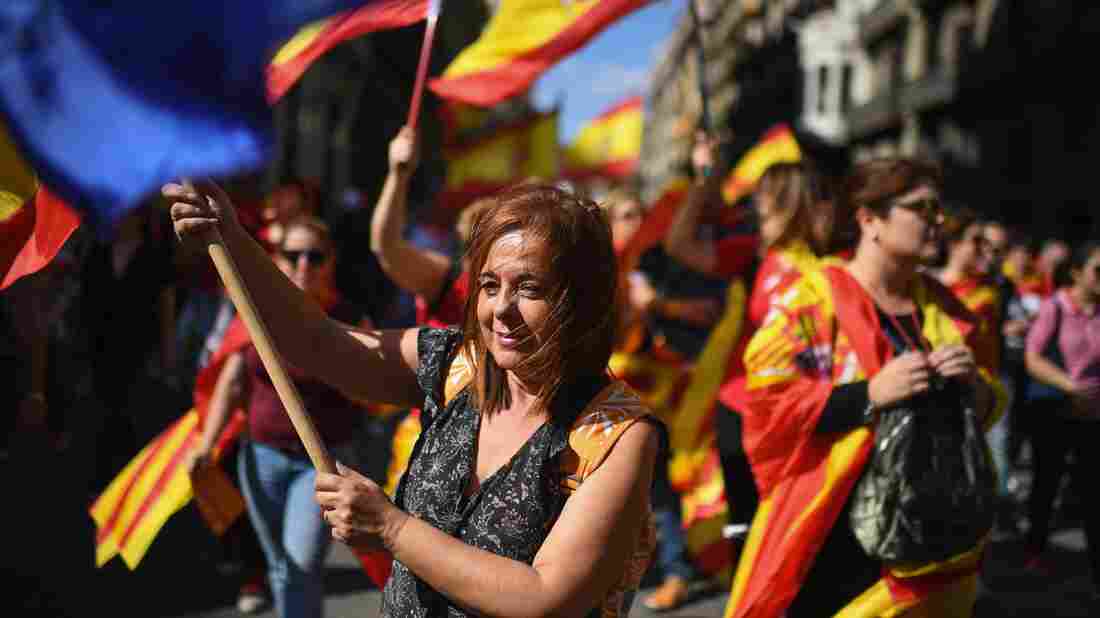 A Pro-Unity rally marches through Barcelona on Sunday, a week after a referendum on independence. Jeff J. Mitchell/Getty Images hide caption 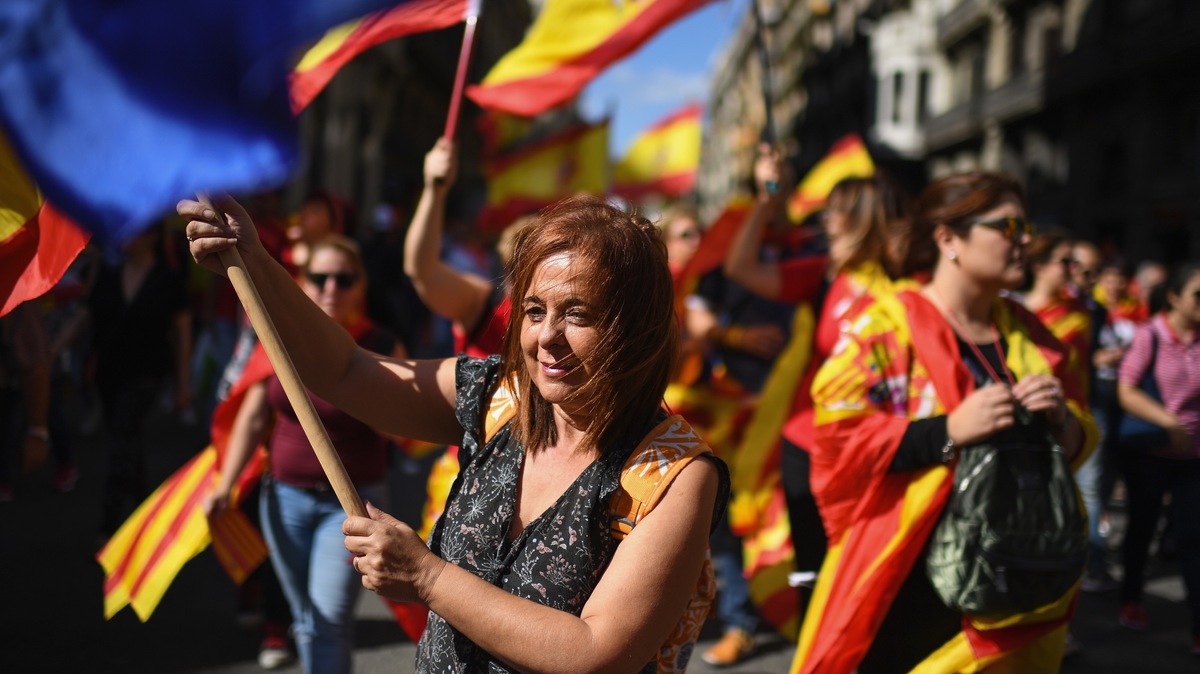 A Pro-Unity rally marches through Barcelona on Sunday, a week after a referendum on independence.

The prime minister of Spain, Mariano Rajoy, issued a warning to Catalonia on Monday, as we reported.

"Spain will not be divided and the national unity will be preserved. We will do everything that legislation allows us to ensure this," Rajoy told the German newspaper Die Welt. "We will prevent this independence from taking place."

In a radio interview, Rajoy said a declaration of independence would prompt Spain to make "decisions to restore the law and democracy."

The Catalan president himself "could end up in prison" over the bid for secession, AP reports.

In his speech on Tuesday, Puigdemont stopped short of the full-throated declaration of independence that Madrid warned against — and that some of his supporters had been anticipating.

"Many people there were hoping today for some epic historical moment that will go in the history books," says Pablo Beramendi, a political science professor at Duke University.

Instead, they got what Peter Ceretti, a Spain analyst with The Economist Intelligence Unit, calls "a wishy-washy approach to declaring independence," one that "stops short" of a unilateral declaration.

But that soft-pedaling might not satisfy Spain, Ceretti says.

"What happens next depends largely on how the speech is interpreted by the central government," Ceretti says. "A heavy-handed response from the government could make things much messier."

Beramendi, meanwhile, suggests the Catalan leaders might be counting on that kind of crackdown. If Spain rejects Puigdemont's invitation for dialogue, "that will allow [Catalonia] to say that the Spanish government is really, truly intransigent ... to try to present Spain as an inflexible partner in a conversation that would require international intervention," he says. "I think that's their gamble."

Either way, both analysts say, the separatist tensions are far from over. And what happens next is mostly up to Madrid.