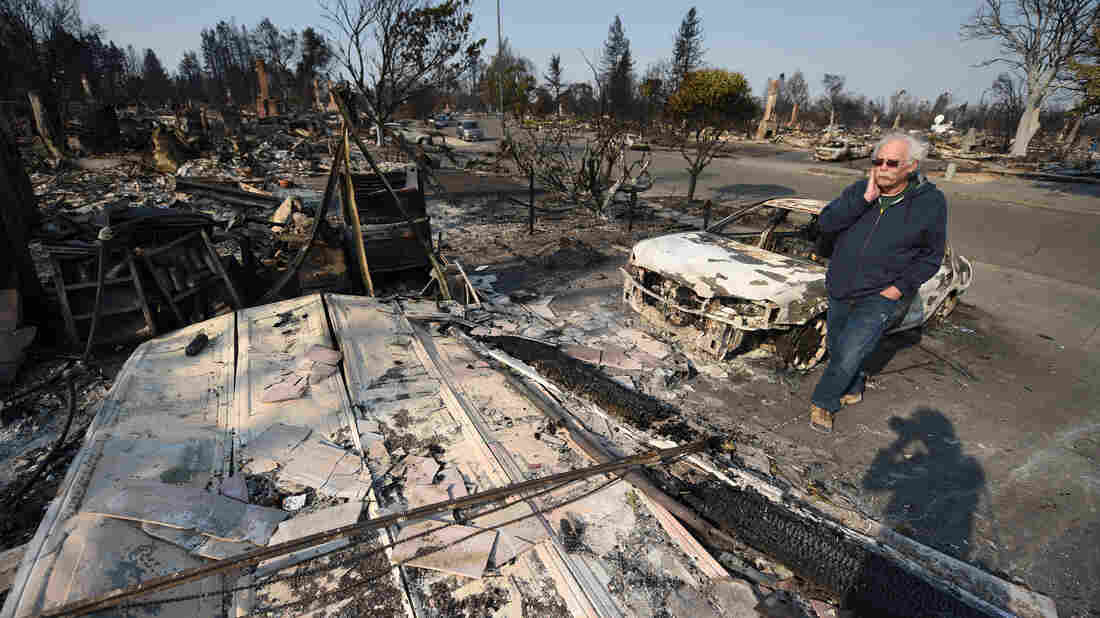 Homeowner Phil Rush is confronted by the remains of his home that was destroyed by wildfire in Santa Rosa, Calif. He says he and his wife and dog escaped with only their medication and a bag of dog food when flames overtook their neighborhood. Robyn Beck/AFP/Getty Images hide caption 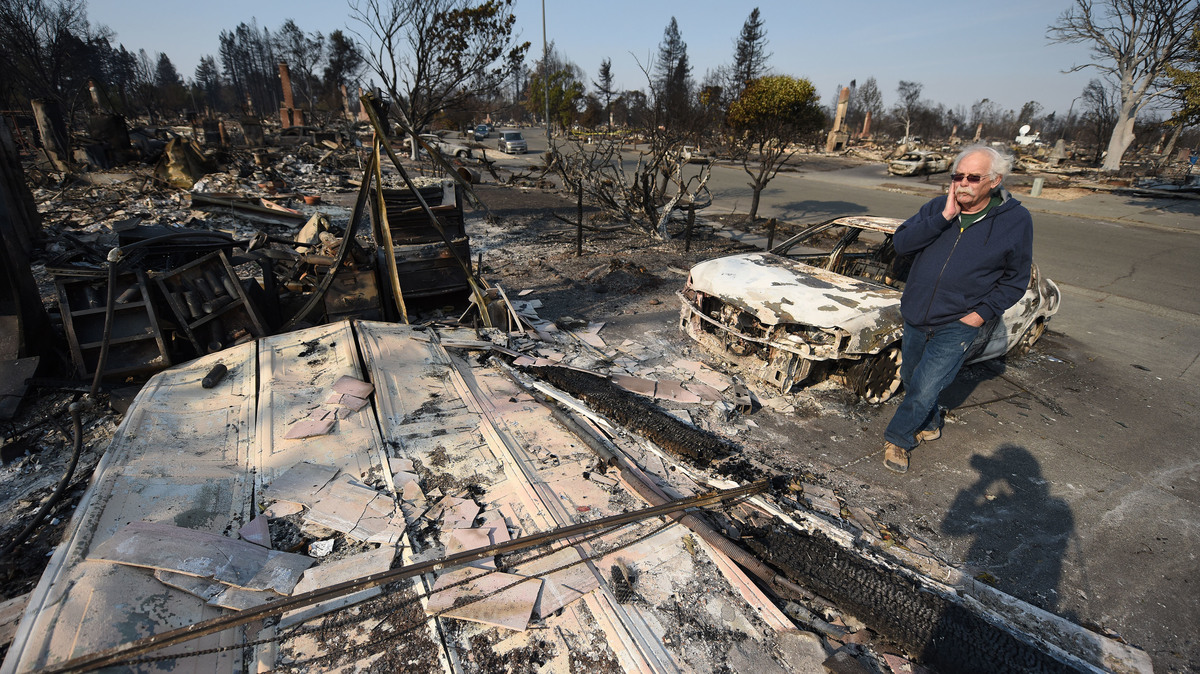 Homeowner Phil Rush is confronted by the remains of his home that was destroyed by wildfire in Santa Rosa, Calif. He says he and his wife and dog escaped with only their medication and a bag of dog food when flames overtook their neighborhood.

In the outbreak of powerful and destructive fires that have struck California since Sunday, there are now 22 large wildfires burning in the state. They've caused at least 23 deaths and scorched nearly 170,000 acres, officials said Wednesday.

The fast-moving Tubbs Fire is now considered the 6th deadliest such blaze in California's history — it has killed 13 people in Sonoma County and two in Napa. Six others have been killed in Mendocino County and two in Yuba County.

Sonoma County officials said Wednesday they had reports of some 300 people still missing.

"We have had big fires in the past. This is one of the biggest, most serious, and it's not over," Gov. Jerry Brown said in a news conference on Wednesday.

Still largely uncontained, the blazes have destroyed at least 3,500 homes and other buildings, many of them in the wine country region of Napa, Sonoma and Mendocino counties. More than 20,000 people have been evacuated.

"Make no mistake," Cal Fire Director Ken Pimlott said in an update at midday Wednesday. "This is a serious, critical, catastrophic event."

Pimlott said there are close to 8,000 firefighters working to combat the fires, along with numerous helicopters and other aircraft. He added that the National Guard and other assets are also being called on to help, as first responders have been battling flames for more than 36 hours.

The Tubbs Fire is one of at least two of the fires have each burned more than 25,000 acres, propelled to explosive growth by strong winds Sunday night. Conditions eased somewhat Tuesday — but the National Weather Service says high winds could return to the area beginning late Wednesday night, with gusts over 50 mph. The North Bay is under a critical fire alert, the agency says.

On Wednesday afternoon, officials ordered a mandatory evacuation in the small Napa Valley city of Calistoga. The sheriff's office said residents were to leave as soon as possible, but no later than 5 p.m. local time.

The fires produced shocking scenes of destruction in the tourist-friendly stretch north of San Francisco, where many green landscapes have been replaced by charred trees, cinders and thick smoke. The ferocity of the flames was captured in a video released by the Sonoma County Sheriff's Office, showing a deputy driving through Franz Valley Road, near where a raging fire entered from Napa County. In the brief footage, glowing cinders litter the road as flames consume trees and structures lining the street.

In posting the video, the sheriff's department told residents, "This is but one moment in a series of moments that will end up defining the strength of our community through what will be a pinnacle moment in Sonoma County history." 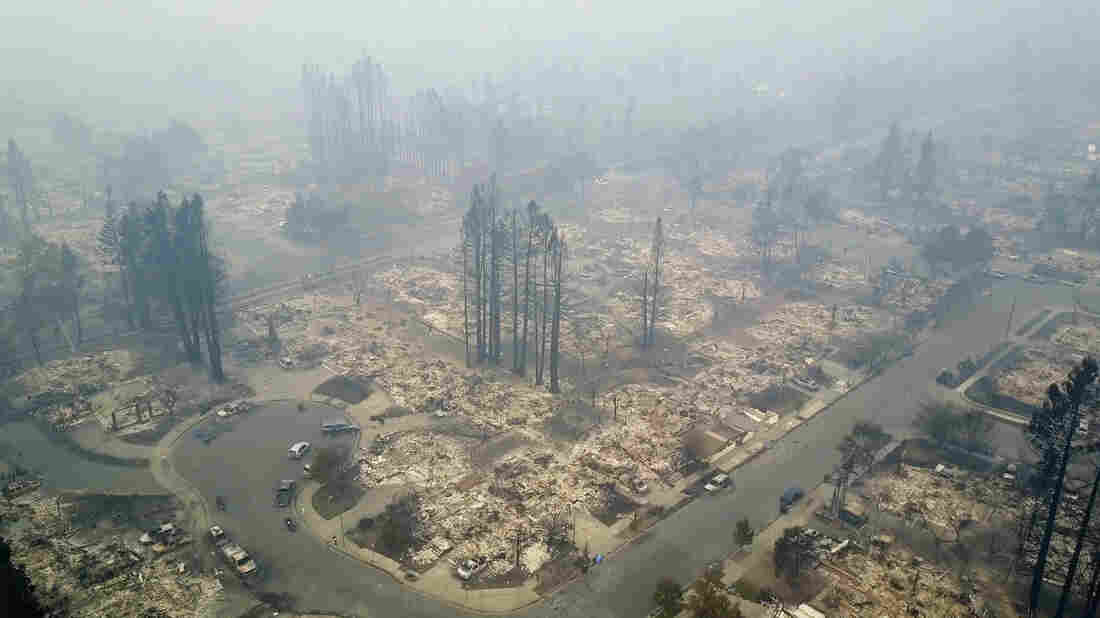 An aerial image from Tuesday shows a neighborhood that was destroyed by an intense and fast-moving wildfire in Santa Rosa, Calif., this week. Newly homeless residents of California wine country are beginning to get details about the damages. Nick Giblin/AP hide caption 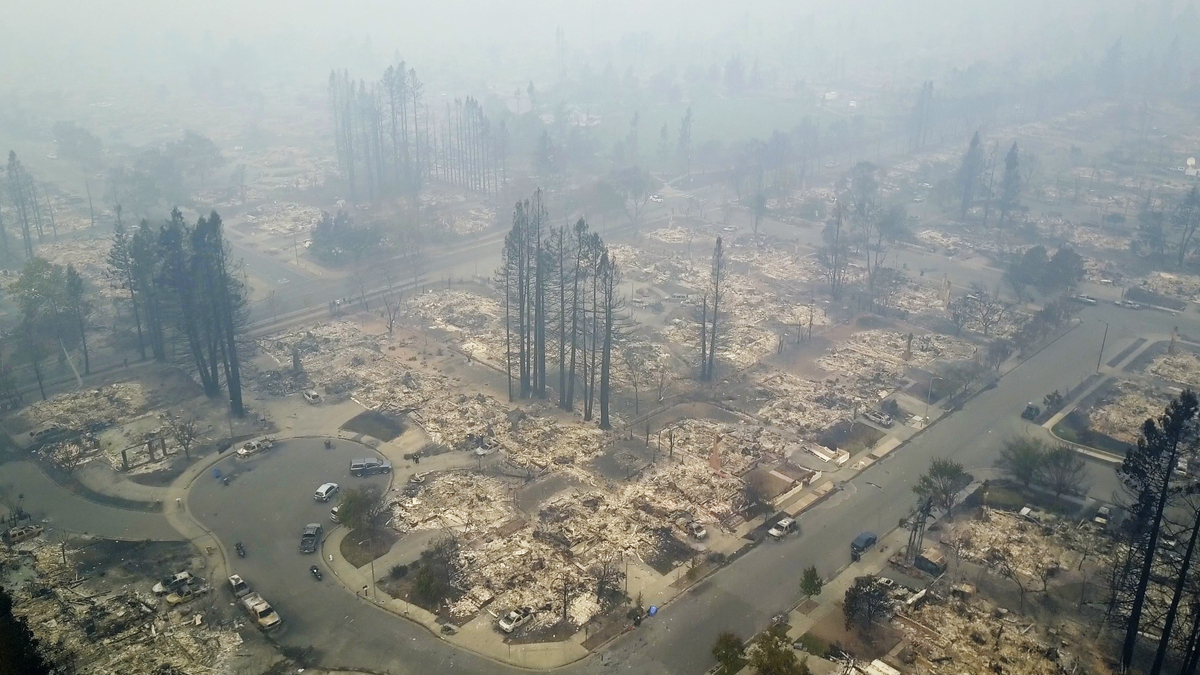 An aerial image from Tuesday shows a neighborhood that was destroyed by an intense and fast-moving wildfire in Santa Rosa, Calif., this week. Newly homeless residents of California wine country are beginning to get details about the damages.

The air quality in the Bay Area on Monday was the worst it has been since officials began collecting data in 1999. "The pollution is so high it's comparable to high pollution days in China," Bay Area Air Quality Management District's Lisa Fasano told KQED.

The intense fires are being described as unlike anything fire officials recall seeing in the area.

"One of the fires moved more than 16 miles in less than than six hours," says Jonathan Cox, a battalion chief with Cal Fire, "all the way from the Napa Valley over to Santa Rosa. Jumped a six-lane highway and was indiscriminate in its destruction of residential and commercial structures."

Speaking to NPR's David Greene, Cox said, "Late season fires are always difficult, because you're contending with very dry fuel moistures. And along with that, you have the wind event that came through on Sunday through Northern California. For some perspective, it was 50- to 70-mile an hour winds that were in the fire area."

Describing the fight against a multidimensional event, Cox laid out firefighters' priorities: "To protect people's lives and get them out of harm's way, to protect the structures and also to build containment lines where we do have the opportunities of engagement."

The McClellan Reload Base, an airstrip that is used to support aerial firefighting efforts, "pumped over 266,000 gallons of fire retardant Monday. Shattering the previous record," says Cal Fire.

As of Tuesday evening, Pacific Gas and Electric Company said that some 75,000 customers were without power, including 50,000 in Santa Rosa and 15,000 in the Napa area. In some cases, the utility has purposefully cut power to prevent lines from endangering first responders. It also cut gas service to more than 44,000 customers, because of the quick-spreading fires.

Officials are telling residents who are under mandatory evacuation orders to stay away until an all-clear order is given. In Santa Rosa, which saw neighborhoods and swaths of land overrun by fire, a curfew remains in effect from 6:45 p.m. to 7:15 a.m.

Fire Evacuees Want To Know What Happened To Their Homes

Among those who lost their homes in Santa Rosa: Paula McCallister, who had moved to the area along with her husband less than a year ago. They're safe — but as seen in photos McCallister shared on Facebook, fire destroyed their house. Her husband snapped the pictures after walking 2 miles to check on their house, beyond security barricades.

McCallister tells NPR's Morning Edition that she posted the images in part because it has been hard to find details about damage in specific neighborhoods.

"They're not reporting anything. They're not telling us, your street from here to here is gone," she said. "And so I wanted all my neighbors that know me on Facebook to see what happened, and what was gone and what wasn't gone so that they have some kind of idea what to do next."

McCallister said that some of those neighbors are the reason she and her husband were able to grab necessities and get out. She says they fled their new house after neighbors walked the streets and knocked on doors, telling people the fire was coming.