Accessibility links
Trump Hints At Limit On Federal Aid To Puerto Rico; San Juan Mayor Says 'Shame On You!' : The Two-Way After President Trump tweets "We cannot keep FEMA" and other assets in Puerto Rico "forever," the mayor of San Juan says he's failing at a moral duty and calls him the "Hater in Chief."

"We cannot keep FEMA, the Military & the First Responders" in Puerto Rico "forever," President Trump said Thursday, hinting at a possible limit on federal aid to the island territory where 3.4 million Americans have struggled to recover from two destructive hurricanes.

Here are the president's comments on the issue, compressed from three consecutive tweets:

"'Puerto Rico survived the Hurricanes, now a financial crisis looms largely of their own making.' says Sharyl Attkisson. A total lack of..... ...accountability say the Governor. Electric and all infrastructure was disaster before hurricanes. Congress to decide how much to spend.... ...We cannot keep FEMA, the Military & the First Responders, who have been amazing (under the most difficult circumstances) in P.R. forever!"

Hours after that message was posted, Puerto Rico Gov. Ricardo Rosselló said via Twitter, "The U.S. citizens in Puerto Rico are requesting the support that any of our fellow citizens would receive across our Nation."

The U.S. citizens in Puerto Rico are requesting the support that any of our fellow citizens would receive across our Nation.

At a government briefing in Puerto Rico on Thursday morning, the main topics were access to drinking water and the restoration of power in an area that has come to rely on generators. When NPR's Tom Gjelten asked about Trump's latest tweets, a spokesman said the governor has spoken with the White House asking for "clarification."

Trump's comments are his latest remarks on Puerto Rico to offer a mix of criticism and support — and to draw what seems to be a direct response from local politicians in the U.S. territory. Last month, Trump accused San Juan Mayor Carmen Yulín Cruz of "poor leadership" and said she and others in Puerto Rico "want everything to be done for them."

In response, Cruz wrote, "The goal is one: saving lives. This is the time to show our 'true colors'. We cannot be distracted by anything else." And after Trump said Cruz had "been told by the Democrats that you must be nasty to Trump," the mayor wore a black T-shirt featuring one word: "Nasty."

After Trump's most recent comments, Cruz responded via Twitter, "@POTUS It is not that you do not get it; you are incapable of fulfilling the moral imperative to help the people of PR. Shame on you!"

@POTUS It is not that you do not get it; you are incapable of fulfilling the moral imperative to help the people of PR. Shame on you.!

She added, "your comments about Puerto Rico are unbecoming of a Commander in Chief they seem more to come from a "Hater in Chief."

President Trump's words seem to be at odds with the message Vice President Pence delivered roughly 12 hours earlier, when he told a crowd gathered for a Hispanic Heritage Month event at the Naval Observatory in Washington, D.C., that "the people of Puerto Rico will recover, and we will be with them every step of the way."

According to the White House transcript, Pence addressed the people of Puerto Rico when he said, "We are with you, we stand with you, and we will be with you every single day until Puerto Rico is restored bigger and better than ever before. Puerto Rico se levanta!"

The Trump administration has come under attack by critics who say federal help was slow to arrive in Puerto Rico. Some also noted that as the island was reeling from Hurricane Maria, the president was instead tweeting about NFL players' behavior during the national anthem.

Here's how the situation stands in Puerto Rico, according to the Federal Emergency Management Agency's latest update:

FEMA says there are currently some 19,000 federal civilian personnel and military service members — including more than 1,400 FEMA personnel — working in Puerto Rico and the U.S. Virgin Islands. In addition to the federal effort, 22 states have responded to calls for aid in Puerto Rico.

Officials in Puerto Rico have said it could take $5 billion to get the island's electrical infrastructure up and running again. The recovery effort comes after the government-owned electricity utility PREPA filed for bankruptcy in July — and after Puerto Rico itself filed for bankruptcy, facing more than $120 billion in debt, as NPR's Samantha Raphelson has reported.

When he visited Puerto Rico last week, Trump said, "Now I hate to tell you, Puerto Rico, but you've thrown our budget a little out of whack, because we've spent a lot of money on Puerto Rico, and that's fine." He added, "We've saved a lot of lives." 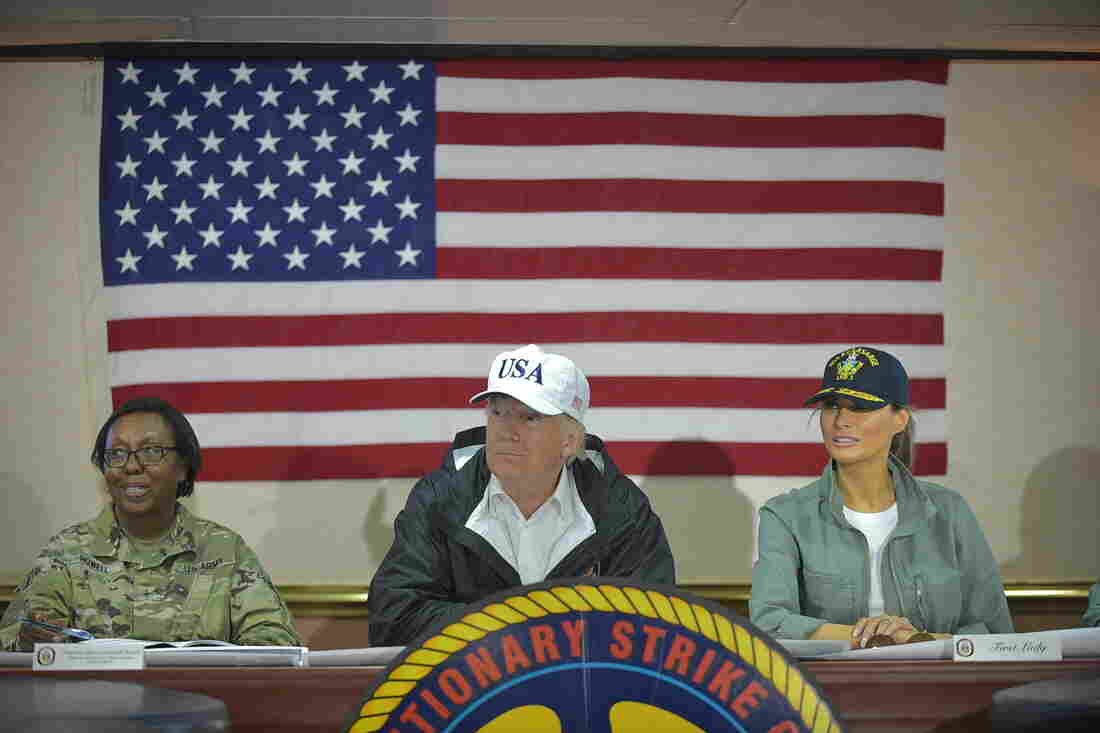 On Thursday, President Trump hinted at the possibility of limiting federal aid to Puerto Rico, where 3.4 million Americans have struggled to recover from a pair of devastating hurricanes. Mandel Ngan/AFP/Getty Images hide caption 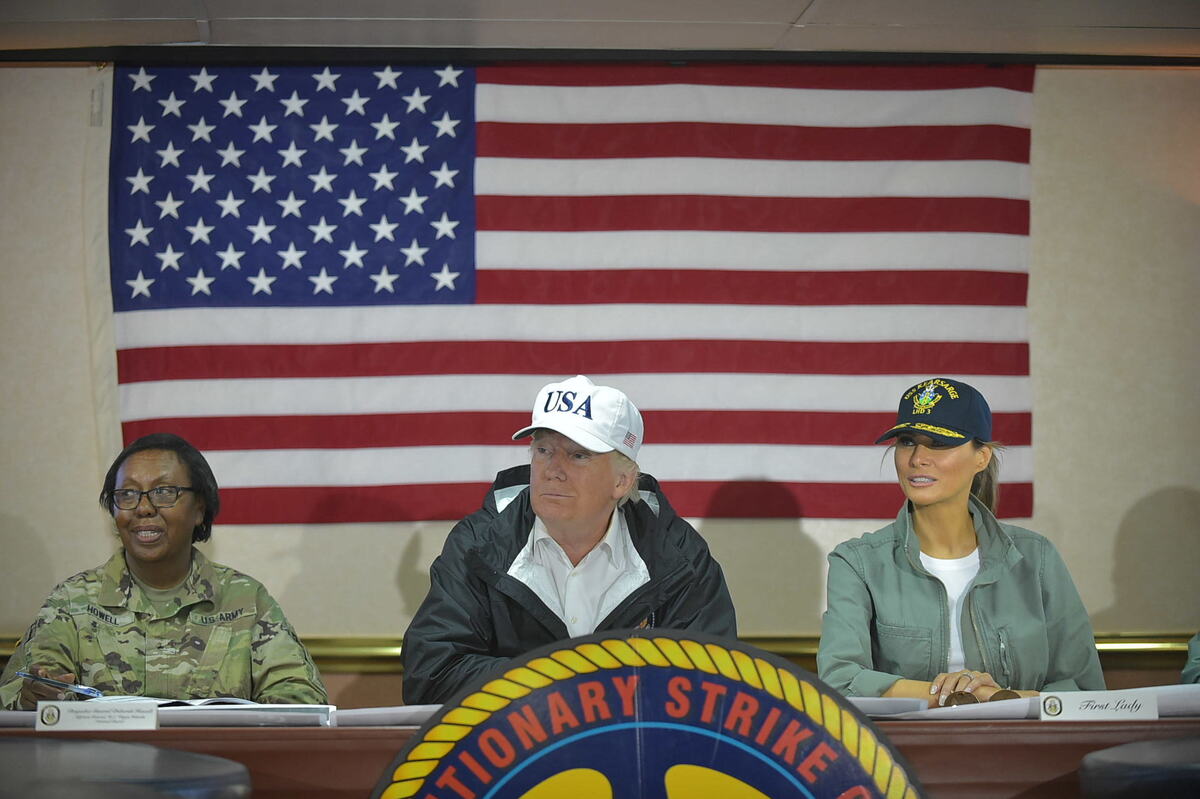 On Thursday, President Trump hinted at the possibility of limiting federal aid to Puerto Rico, where 3.4 million Americans have struggled to recover from a pair of devastating hurricanes.

As for the issue of accountability, the president may have been referring to reports of inefficiency and mismanagement among Puerto Rico's local governments. As Tom Gjelten reported Wednesday night, the island has 78 mayors — and, he added, "They're said to be accustomed to doing their business without interference from above."

Some of those mayors have called for all supplies to go through them, so they can distribute the aid. But the federal relief effort has also hit problems such as reported hoarding by municipal employees, Tom said, citing it as one reason for the "militarization of the aid operation" in Puerto Rico.

In citing Sharyl Attkisson, Trump was referring to the former CBS News correspondent who now has a weekly TV show through the Sinclair Broadcast Group and who sometimes writes for The Hill.

In response to being mentioned in the president's tweet, Attkisson said in a tweet of her own, "This is my cover story Sunday. (He must have seen the promotion last Sunday.) See my interview w/Puerto Rico's governor on the island's fiscal disaster prior to the hurricane."