Accessibility links
NCAA 'Could Not Conclude Academic Violations' In UNC Athletics Scandal : The Two-Way An NCAA infractions panel takes no major action against the University of North Carolina, though it says athletes "likely benefited from the so-called 'paper courses' " for some 18 years.

NCAA 'Could Not Conclude Academic Violations' In UNC Athletics Scandal

NCAA 'Could Not Conclude Academic Violations' In UNC Athletics Scandal 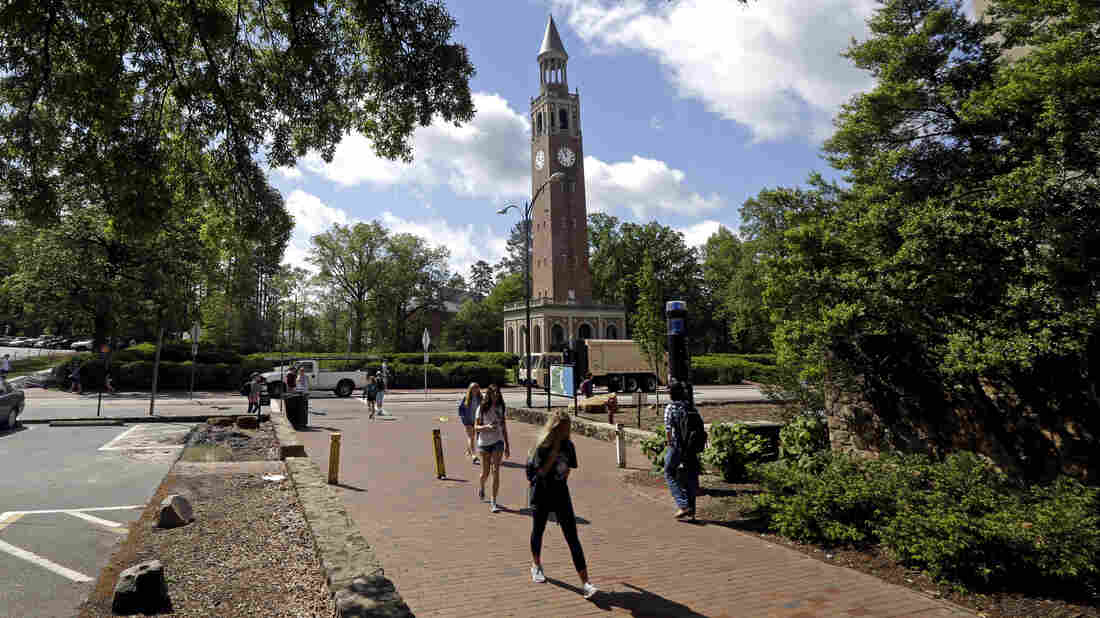 The Bell Tower looms over the campus at the University of North Carolina, Chapel Hill, which has avoided major penalties over a long-running academic scandal that involved its sports teams. Gerry Broome/AP hide caption 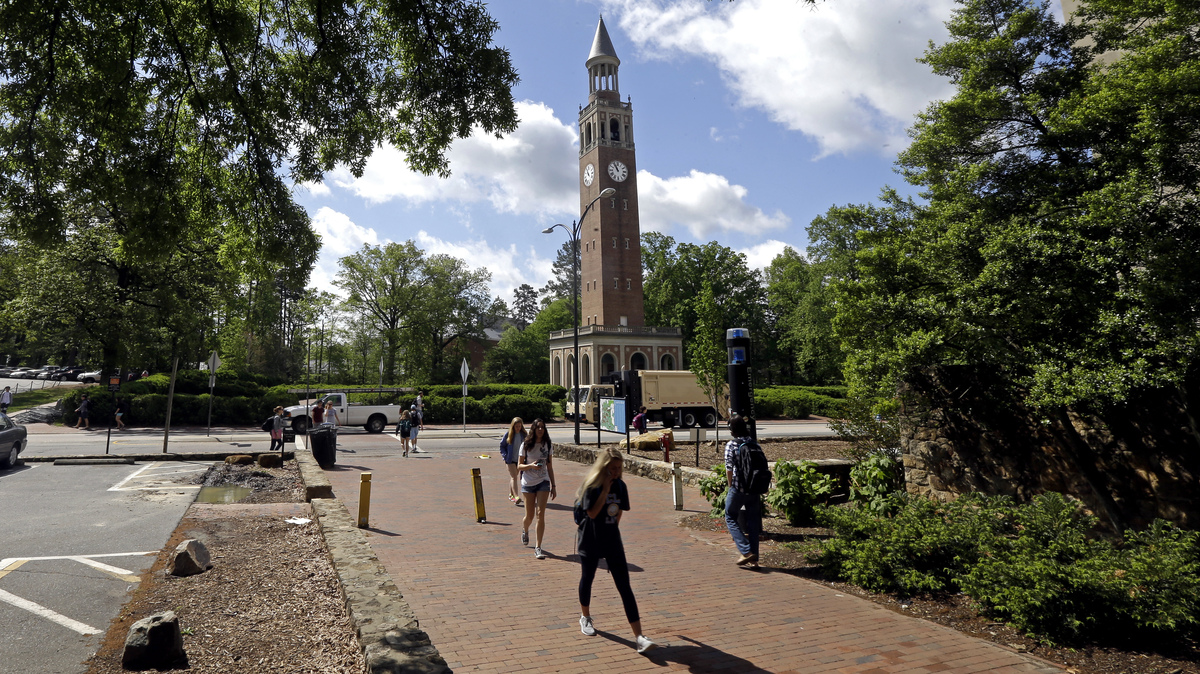 The Bell Tower looms over the campus at the University of North Carolina, Chapel Hill, which has avoided major penalties over a long-running academic scandal that involved its sports teams.

An NCAA infractions panel says that although athletes "likely benefited from the so-called 'paper courses' " for some 18 years at the University of North Carolina, it can't conclude there were violations beyond beyond two employees' failure to cooperate with the investigation.

The university had been facing five Level 1 violations for "severe breaches of contract."

Fallout from the academic scandal has been percolating for years. In late 2014, UNC's flagship school in Chapel Hill, N.C., released the results of an internal investigation that "revealed approximately 3,000 students — mostly student athletes — had their grades inflated through sham courses in the school's African and Afro-American studies department over a span of almost 20 years," as NPR's Sam Sanders reported.

While students who played for the Tar Heels' sports teams were found to have likely benefited from the arrangement, the NCAA's Division I Committee on Infractions "did not establish that the courses were solely created, offered and maintained as an orchestrated effort to benefit student-athletes," the panel's chief hearing officer, Greg Sankey, said in a statement about the findings.

As member station WUNC in Chapel Hill reports, "The NCAA panel noted that determining academic fraud was out of its purview, something UNC has argued for months."

We'll note that WUNC is licensed to a company owned by the university. The station, North Carolina Public Radio-WUNC says that it "does not receive direct financial support from the university, but does receive in-kind support."

WUNC reporter Jason deBruyn says that in response to the findings, UNC Athletics Director Bubba Cunningham issued a statement in which he said in part, "We're not proud of the behavior, but we didn't think it violated the bylaw."

Let this quote from Bubba Cunningham resonate. "Sometimes the behavior that you're not proud of, just doesn't quite fit in to a bylaw" pic.twitter.com/6NSTzLR5Sk

The scandal came to light after reporter Dan Kane of the Raleigh News and Observer reviewed the transcript of a UNC football player who had gotten into trouble — as Kane told NPR in 2015, the player had gotten a B-plus in an upper-level class before he started his first full term as a freshman.

"Well, in that first semester of freshman year, he's taking remedial writing. The professor who had taught that class had also missed some plagiarism from a paper written by another football player that had become public a couple of months earlier. So there clearly was something going on. You know, I learned from a former learning specialist there, Mary Willingham, that these athletes were being steered into these classes that didn't meet and which are just told to write a paper."

The panel says that the only violations it could firm up were committed by former African and Afro-American Studies department Chairman Julius Nyang'oro and a former curriculum secretary; it says they "both violated ethical conduct and cooperation bylaws" by refusing to speak about the issue. The secretary eventually spoke after three years of silence — causing the panel to designate her violation as Level II rather than the more serious Level I.

In December 2014, months after the internal review was completed, four UNC employees were reported to have resigned or been in the process of being fired in the wake of the scandal. In all, the university had said it was taking action against nine employees. Among those forced out was Jan Boxill, who had been the faculty leader at UNC-Chapel Hill and was also a counselor for women's basketball. She has denied the allegations against her.