Accessibility links
Bowe Bergdahl Pleads Guilty To Desertion, Misconduct : The Two-Way Army Sgt. Bowe Bergdahl, who was held by the Taliban from 2009 to 2014 after leaving his base in Afghanistan, has pleaded guilty to desertion and misbehavior. 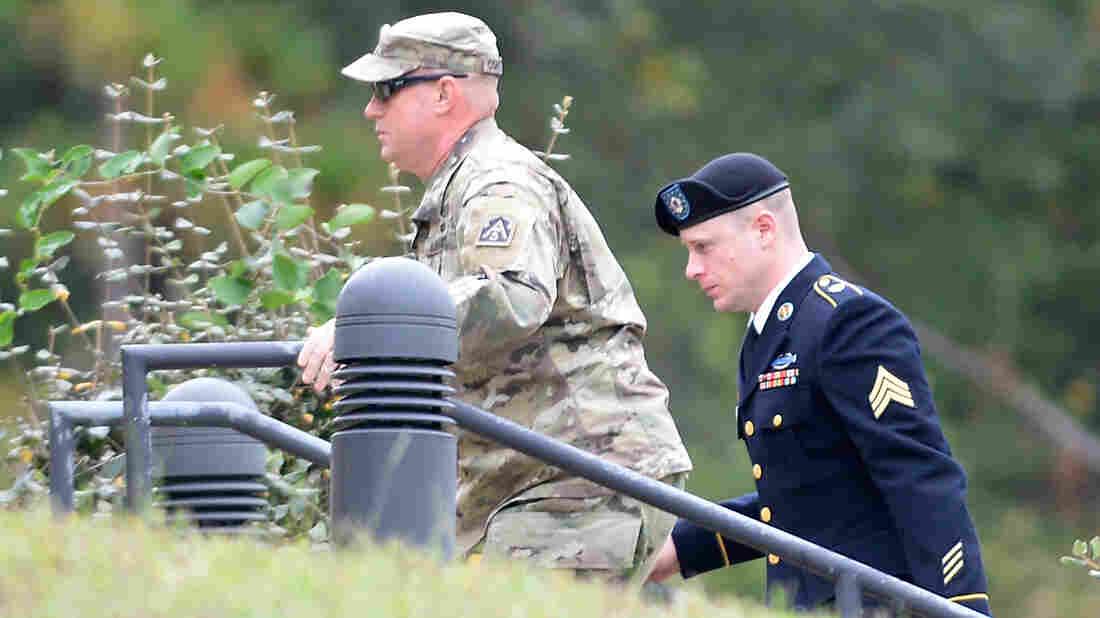 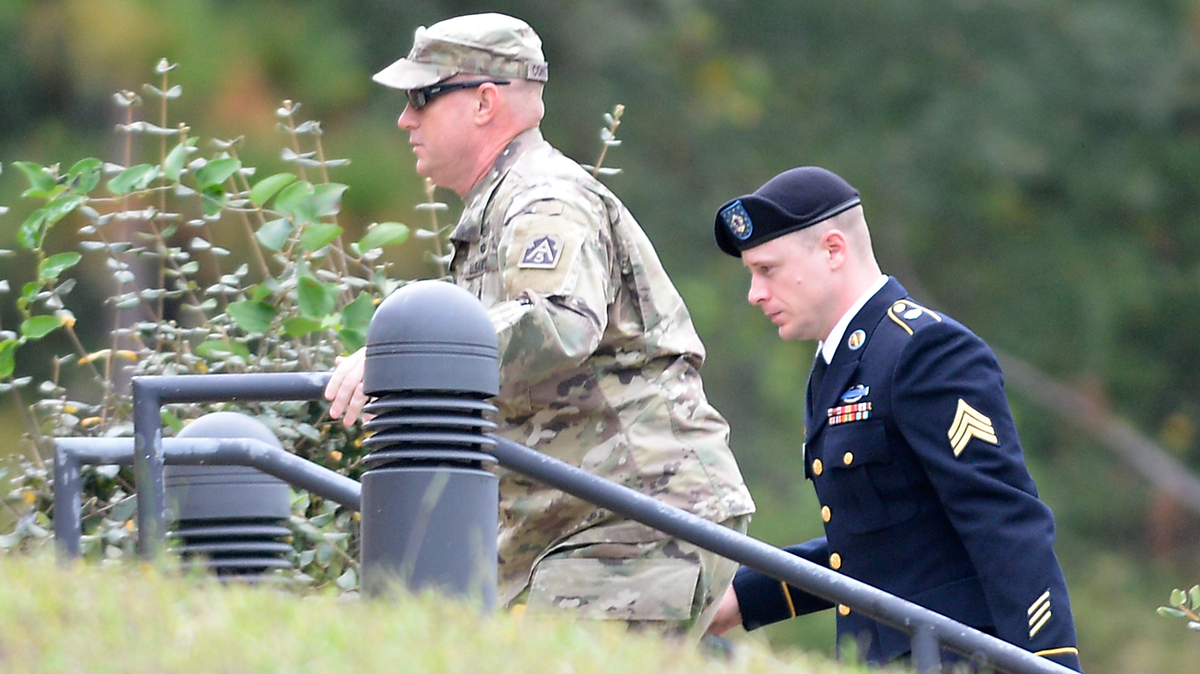 Army Sgt. Bowe Bergdahl (right) was escorted into a military courthouse for a hearing in Fort Bragg, N.C., on Monday.

Army Sgt. Bowe Bergdahl, who was held by the Taliban after leaving his base in Afghanistan in 2009, has pleaded guilty to desertion and misbehavior before the enemy. Bergdahl was freed in 2014 in exchange for five Taliban detainees.

Bergdahl, a native of Idaho, pleaded guilty before the military judge in the case, Army Col. Jeffery R. Nance, at a hearing at Fort Bragg, N.C., on Monday, according to The Associated Press.

The AP adds, "It's not clear if Bergdahl, 31, has a deal with prosecutors to limit his punishment, or if he's simply pleading guilty in hopes of leniency from Nance. The misbehavior charge carries a maximum penalty of life in prison, while the desertion charge is punishable by up to five years."

Questioned by Nance, Bergdahl said, "I left my observation post on my own," CNN reports, adding that the soldier also said, "I understand leaving was against the law."

The guilty plea comes more than two years after the charges were filed. Earlier this year, Bergdahl's lawyers said their client wouldn't be able to get a fair trial, citing dozens of comments about him that were made by President Trump dating to 2015.

Here's a brief recap of the Bergdahl case:

During his captivity, Bergdahl was shown in several Taliban propaganda videos; the insurgent group also filmed the exchange that granted his freedom, showing a helicopter landing and soldiers collecting Bergdahl before taking off again.

The prisoner trade for Bergdahl inflamed debate — particularly as Trump and others have variously said that five or six soldiers died in the effort to locate and rescue the soldier.

Asked to clarify that issue in 2014, then-Secretary of Defense Chuck Hagel said in testimony before Congress:

But while it seems no U.S. personnel died in the effort to find Bergdahl, at least two were wounded — and Nance decided over the summer that evidence regarding those injuries should be considered. As Stars and Stripes reports, "The judge ruled that a Navy SEAL and an Army National Guard sergeant wouldn't have wound up in separate firefights that left them wounded if they hadn't been searching for Bergdahl."

Legal questions about the case have extended beyond Bergdahl. In August 2014, the Government Accountability Office said the Pentagon "didn't give enough notice to Congress and misused nearly $1 million" in handling the prisoner swap. In addition to using money that was already appropriated for other uses, the Defense Department didn't tell members of Congress about the swap until the day after it was made.

In response to those findings, the Pentagon said it had to act quickly to secure Bergdahl's safe return; Hagel said the circumstances were both extraordinary and unique.

Some of Bergdahl's most complete comments about his experience came in the second season of the Serial podcast, which was published in late 2015. As NPR's Eyder Peralta reported, Bergdahl said "he left his post to try to stir controversy in order to get the attention of top military officials so he could explain problems he saw in the Army."