Accessibility links
Richard Wilbur, Renowned American Poet And Translator, Dies At 96 : The Two-Way His commitment to traditional forms, with tight patterns and taut construction, stood out among his contemporaries. He said his craft was finding order in pain and chaos — not creating it.

Richard Wilbur Reads 'The Opposite Of Pillow' 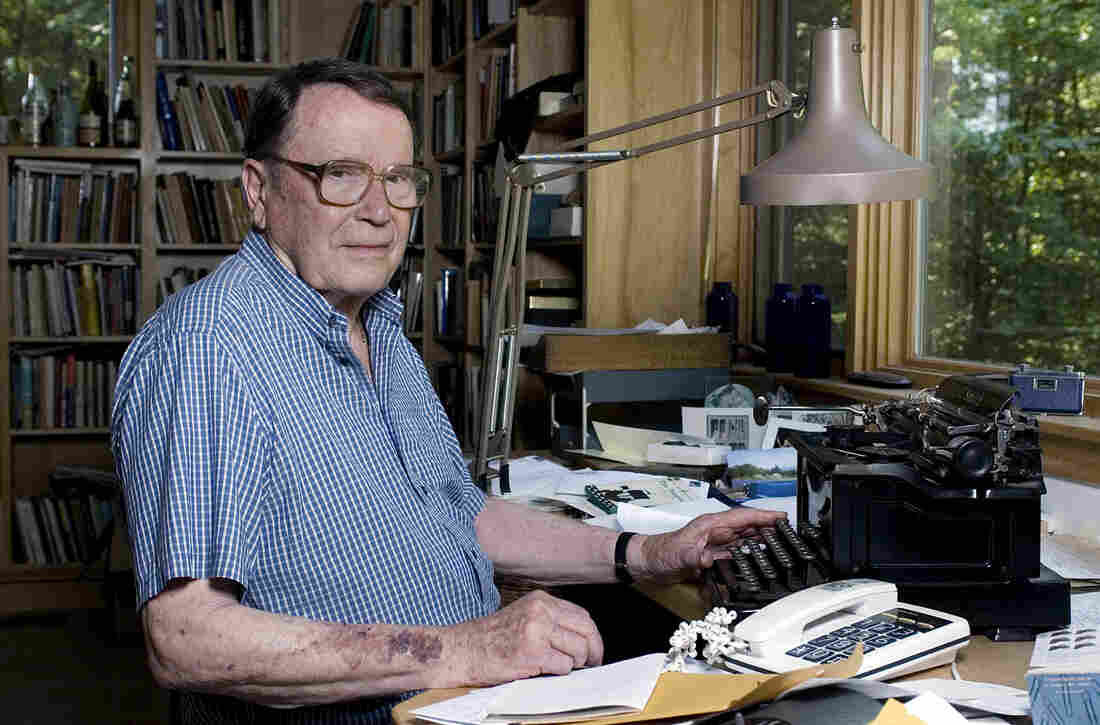 Poet Richard Wilbur, shown at his home in Cummington, Mass., in 2006, died on Saturday at the age of 96. Wilbur, a Pulitzer Prize-winning poet and translator, intrigued and delighted generations of readers and theatergoers through his rhyming editions of Moliere and his own verse on memory, writing and nature. Nancy Palmieri/AP hide caption 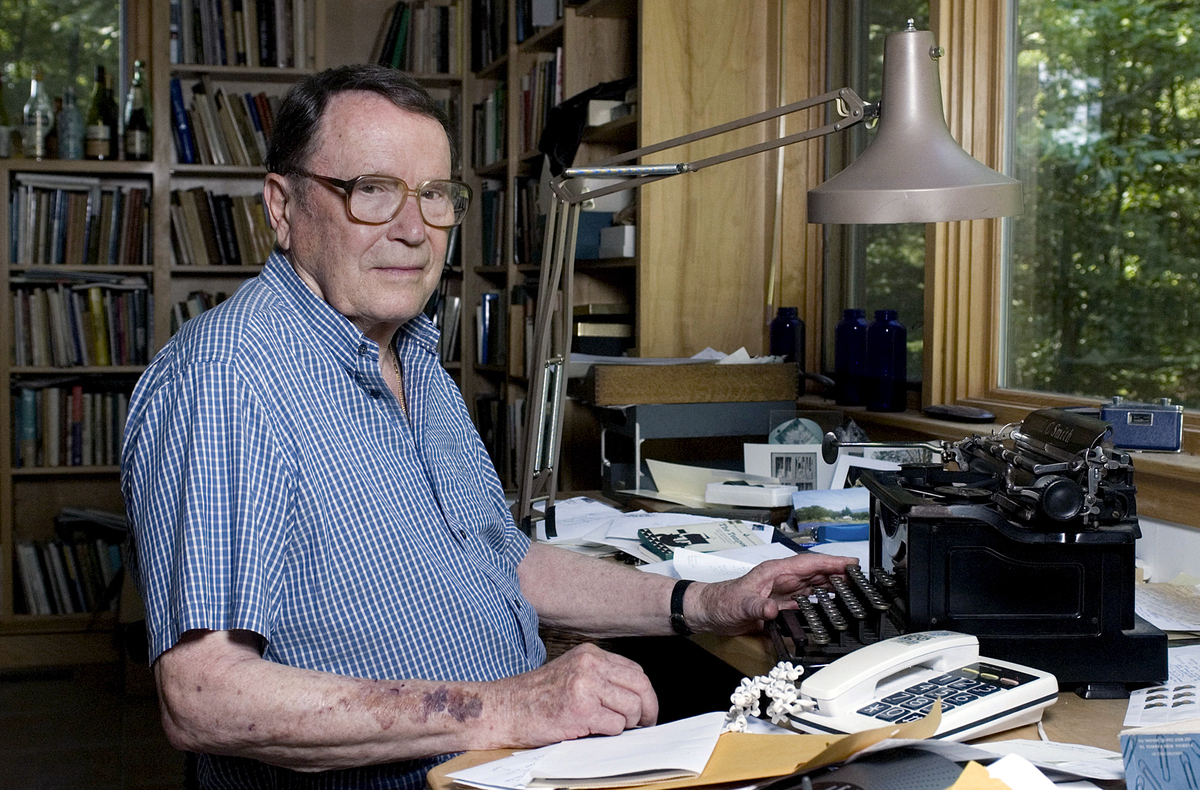 Poet Richard Wilbur, shown at his home in Cummington, Mass., in 2006, died on Saturday at the age of 96. Wilbur, a Pulitzer Prize-winning poet and translator, intrigued and delighted generations of readers and theatergoers through his rhyming editions of Moliere and his own verse on memory, writing and nature.

Richard Wilbur, the former poet laureate and two-time Pulitzer Prize winner renowned for his elegant, exquisitely crafted formal poetry has died at the age of 96.

Wilbur died on Saturday, with his family at his side, friend and fellow poet Dana Gioia told the Associated Press. He leaves behind a body of work that was showered with acclaim — in addition to his Pulitzers, Wilbur won the National Book Award, a National Medal of the Arts, the Bollingen Prize (twice) the Wallace Stevens Award, the Frost Medal, a Guggenheim Fellowship (twice), the T.S. Eliot Award, the Edna St. Vincent Millay Memorial Award, among others.

He was renowned as a translator of French drama, transforming the work of Moliere and Racine into perfectly rhymed English. He also wrote the book for Leonard Bernstein's take on Voltaire's Candide.

Wilbur wrote books for children, too, including several volumes of playful rhymes about "opposites" — an armadillo, as the opposite of a pillow, for instance.

Richard Wilbur Reads 'The Opposite Of Pillow'

In 1991, when an NPR host asked Wilbur if the poet laureate ought to be writing such poetry, the poet laughed. "I have no fear of lowering myself," he said.

But above all, he was famous for his mastery of so-called "traditional forms," tautly constructed and regularly rhymed.

Within the constraints of a sonnet, couplet or another precise pattern, he could build suspense, wring surprises — or weave a minute slice of life with exquisite craftsmanship:

Fringing the woods, the stone walls, and the lanes, Old thickets everywhere have come alive, Their new leaves reaching out in fans of five From tangles overarched by this year's canes.

They have their flowers, too, it being June, And here or there in brambled dark-and-light Are small, five-petalled blooms of chalky white, As random-clustered and as loosely strewn

Poetry like this — crystalline perfection in its form, with a tendency toward detachment — was not exactly fashionable for most of Wilbur's career. But as his colleagues pursued more experimental structures, he continued to work within the tight confines of the patterns he loved, to widespread acclaim.

He knew that comforting, orderly consistency in a form could contain, even conceal, great horror — as in his poem "Terza Rima," written, of course, in terza rima:

In this great form, as Dante proved in Hell,

There is no dreadful thing that can't be said

In passing. Here, for instance, one could tell

How our jeep skidded sideways toward the dead

Enemy soldier with the staring eyes,

Bumping a little as it struck his head

And then flew on, as if toward Paradise.

As that poem suggests, Wilbur's calm, orderly and reflective work was born out of the horror and uncertainty of World War II. He began taking poetry seriously as a soldier, during his three years in combat.

"It was one of the few constructive things I could do with the long periods of idleness which military service involves — writing poetry was something to do," he told NPR's Fresh Air in 1989. "And then there was the general disorder and doubtfulness of the world. We didn't know, when our war against Adolf Hitler began, that we were going to beat him. We might have lived in a Hitler world for years thereafter, for all we knew.

"And then there was the interior disturbance which even the bravest and securest of us felt at such a time," he said. "... all of that leads to the tendency of art — not to make things look nicer than they are but to face up to things, to clarify."

"One does not use poetry for its major purposes, as a means to organize oneself and the world, until one's world somehow gets out of hand," he once wrote.

But for Wilbur, the art of crafting poetry — and particularly his style of poetry, wrapping a perfect, certain pattern around imperfection and uncertainty— was not just an act of organizing chaos. It was as much about discovery as creation.

"I feel that the universe is full of glorious energy, that the energy tends to take pattern and shape, and that the ultimate character of things is comely and good," he told The Paris Review in 1977. "I am perfectly aware that I say this in the teeth of all sorts of contrary evidence, and that I must be basing it partly on temperament and partly on faith, but that is my attitude.

"My feeling is that when you discover order and goodness in the world, it is not something you are imposing — it is something which is likely really to be there, whatever crumminess and evil and disorder there may also be," he said.

That is, creating a perfectly balanced, precisely rhymed poem about mortality or uncertainty is not holding pain at bay, but bringing it close.

"One of the jobs of poetry is to make the unbearable bearable," he said, "not by falsehood but by clear, precise confrontation."

In her room at the prow of the house
Where light breaks, and the windows are tossed with linden,
My daughter is writing a story.

I pause in the stairwell, hearing
From her shut door a commotion of typewriter-keys
Like a chain hauled over a gunwale.

Young as she is, the stuff
Of her life is a great cargo, and some of it heavy:
I wish her a lucky passage.

But now it is she who pauses,
As if to reject my thought and its easy ﬁgure.
A stillness greatens, in which

The whole house seems to be thinking,
And then she is at it again with a bunched clamor
Of strokes, and again is silent.

I remember the dazed starling
Which was trapped in that very room, two years ago;
How we stole in, lifted a sash

And retreated, not to affright it;
And how for a helpless hour, through the crack of the door,
We watched the sleek, wild, dark

And iridescent creature
Batter against the brilliance, drop like a glove
To the hard ﬂoor, or the desk-top,

And wait then, humped and bloody,
For the wits to try it again; and how our spirits
Rose when, suddenly sure,

It lifted off from a chair-back,
Beating a smooth course for the right window
And clearing the sill of the world.

It is always a matter, my darling,
Of life or death, as I had forgotten. I wish
What I wished you before, but harder.

She is going back, these days, to the great stories
That charmed her younger mind. A shaded light
Shines on the nape half-shadowed by her curls,
And a page turns now with a scuffing sound.
Onward they come again, the orphans reaching
For a first handhold in a stony world,
The young provincials who at last look down
On the city's maze, and will descend into it,
The serious girl, once more, who would live nobly,
The sly one who aspires to marry so,
The young man bent on glory, and that other
Who seeks a burden. Knowing as she does
What will become of them in bloody field
Or Tuscan garden, it may be that at times
She sees their first and final selves at once,
As a god might to whom all time is now.
Or, having lived so much herself, perhaps
She meets them this time with a wiser eye,
Noting that Julien's calculating head
Is from the first too severed from his heart.
But the true wonder of it is that she,
For all that she may know of consequences,
Still turns enchanted to the next bright page
Like some Natasha in the ballroom door—
Caught in the flow of things wherever bound,
The blind delight of being, ready still
To enter life on life and see them through.

Though the season's begun to speak
Its long sentences of darkness,
The upswept boughs of the larch
Bristle with gold for a week,

And then there is only the willow
To make bright interjection,
Its drooping branches decked
With thin leaves, curved and yellow,

Till winter, loosening these
With a first flurry and bluster,
Shall scatter across the snow-crust
Their dropped parentheses.