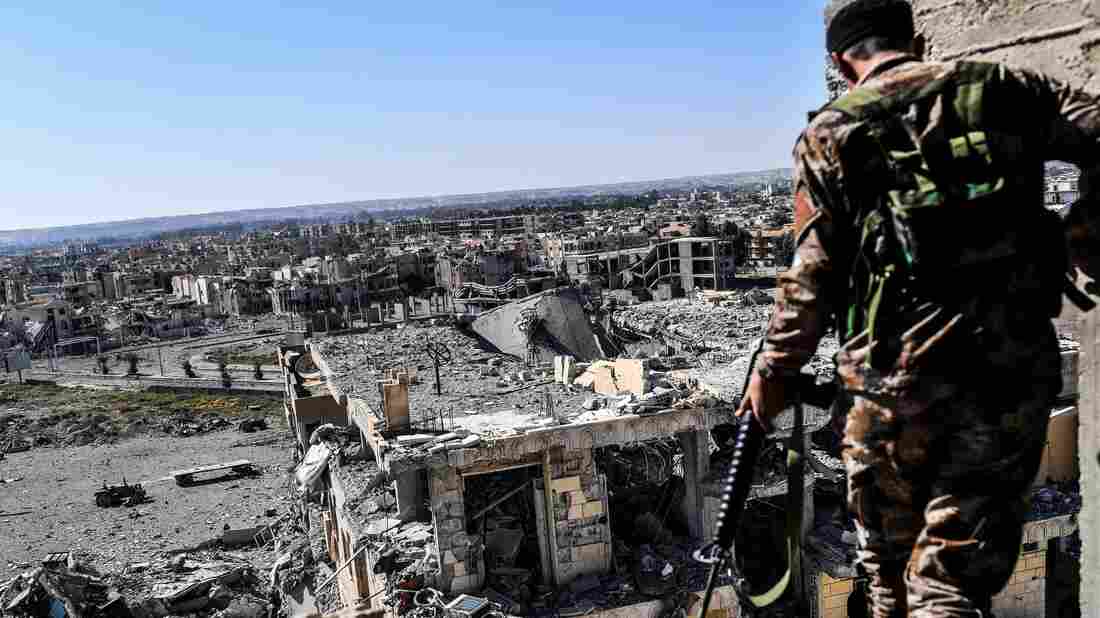 A member of the Syrian Democratic Forces walks on a building near Raqqa's stadium Monday, as they cleared the last positions on the front line in the fight against ISIS. Bulent Kilic/AFP/Getty Images hide caption 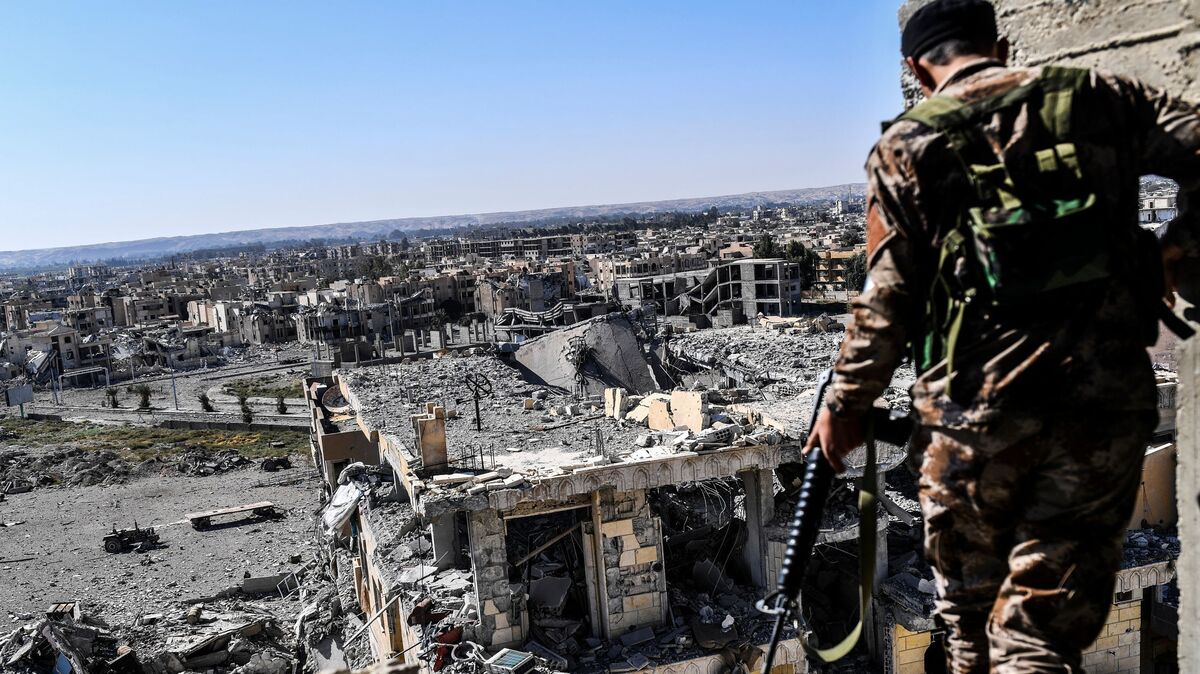 A member of the Syrian Democratic Forces walks on a building near Raqqa's stadium Monday, as they cleared the last positions on the front line in the fight against ISIS.

The U.S.-backed Syrian Democratic Forces are in the process of kicking ISIS out of Raqqa, the extremist group's self-declared capital where it has terrorized civilians and plotted attacks against targets linked to the U.S. and its allies. Now ISIS fighters are reportedly bottled up in a stadium complex in the Syrian city.

As of Tuesday afternoon local time, the SDF controlled "more than 90 percent" of Raqqa, according to U.S. Army Col. Ryan Dillon, spokesman for Operation Inherent Resolve.

The gains have left ISIS "on the verge of a devastating defeat," Dillon said in an update shortly before noon ET. In the past few days, he said, "about 350 fighters" have surrendered.

Celebrations began to break out among the SDF in Raqqa on Tuesday, as the end of a four-month offensive seemed near. But Dillon tells NPR's Ruth Sherlock that fighting could continue as ISIS fighters hold out in booby-trapped buildings.

Rigged explosives present a peril of their own. The commander of the Raqqa Internal Security Forces — who was to help secure the city after ISIS was defeated there — died Monday, Dillon said, "when he was walking through Raqqa and triggered an IED, and he had two of his colleagues that were with him."

The near-total takeover of Raqqa is being marked three years after the Operation Inherent Resolve task force was officially established by the Department of Defense.

The task force says it has liberated "over 6.6 million Iraqi and Syrian from Daesh control" and taken back nearly 94,000 square kilometers of land — nearly 90 percent of the territory seized by the extremist group in 2014.

As for how many fighters ISIS currently has at its disposal, the task force said its estimates range from 3,000 to 7,000 who are continuing to fight in Iraq and Syria. The group also says it has degraded ISIS' ability to fund its operations, by shutting down 90 percent of its oil revenues.

The Raqqa landmarks that have been wrested from ISIS' control, Dillon notes, include the Al-Naim traffic circle, once used by the militants to carry out executions and acts of depraved violence.

The precise number of ISIS fighters who remain at large in the city isn't known. Over the weekend, word emerged that at least 100 ISIS fighters had surrendered. From Monday into Tuesday, the militants were isolated in two areas: a hospital and at the municipal stadium, according to the Syrian Observatory for Human Rights. The stadium had been used as a prison.

After fighters at the hospital reportedly surrendered, that left the stadium — and the Observatory says that when negotiations for more surrenders became drawn out, the SDF launched an assault Tuesday backed by U.S. special forces.

Made up of Arab and Kurdish fighters, the SDF began a push to take Raqqa in early June. They were backed by airstrikes from the U.S.-led coalition — strikes targeting ISIS that have been blamed for causing civilian deaths.

"Raqqa is where ISIS first imposed the strict laws that it hoped would one day govern a caliphate that took land across Iraq and Syria. After they took the city in 2014, women were not allowed out in public alone. Young men — even children — were trained to fight. Non-Muslims were persecuted. Those who broke laws were executed publicly. ...

"But the imminent victory comes at a huge costs. The fight on the ground, and airstrikes by the U.S. and Russia have left Raqqa all but destroyed. Many civilians have been killed. Most of the population fled, and now they don't know if they'll have a home when they return."

What could be the final push to rid Raqqa of ISIS fighters comes days after a convoy of vehicles left the city under a deal that set up by the Raqqa Civil Council and local Arab tribal elders. The exodus prompted concern that ISIS fighters might slip through the front lines, and the U.S. Operation Inherent Resolve said that anyone leaving Raqqa under the arrangement would be subject to search and screening by Syrian Democratic Forces.

In Raqqa, the U.S. and its allies are liberating a city that will require years to recover from the violence and destruction. And once it is secured, the fight against ISIS moves elsewhere.

Here is how NPR's Tom Bowman described what could be a lengthy military process when the offensive began this summer:

"Even after Raqqa falls, U.S. officials say they have to clear an area south of Raqqa along the Iraq border. It's some 150 miles. And the trouble is, you have Syrian regime forces there, as well. So the question is, how does the U.S. deal with the Syrians. You know, the answer they're saying is to work with the Russians to what they call de-conflict military operations with the Russian ally Syria."

On another front in the war against ISIS, the U.S. carried out a strike on two training camps in Yemen, which the U.S. Central Command said will disrupt the extremist group's ability to train new fighters.

The Centcom added that U.S. forces have been working "in coordination with the government of Yemen" to carry out counterterrorism operations there.