Accessibility links
Tom Marino, Trump's Pick As Drug Czar, Withdraws After Damaging Opioid Report : The Two-Way The Republican congressman from Pennsylvania is withdrawing days after reports that legislation he sponsored hindered the Drug Enforcement Administration in its fight against the U.S. opioid crisis. 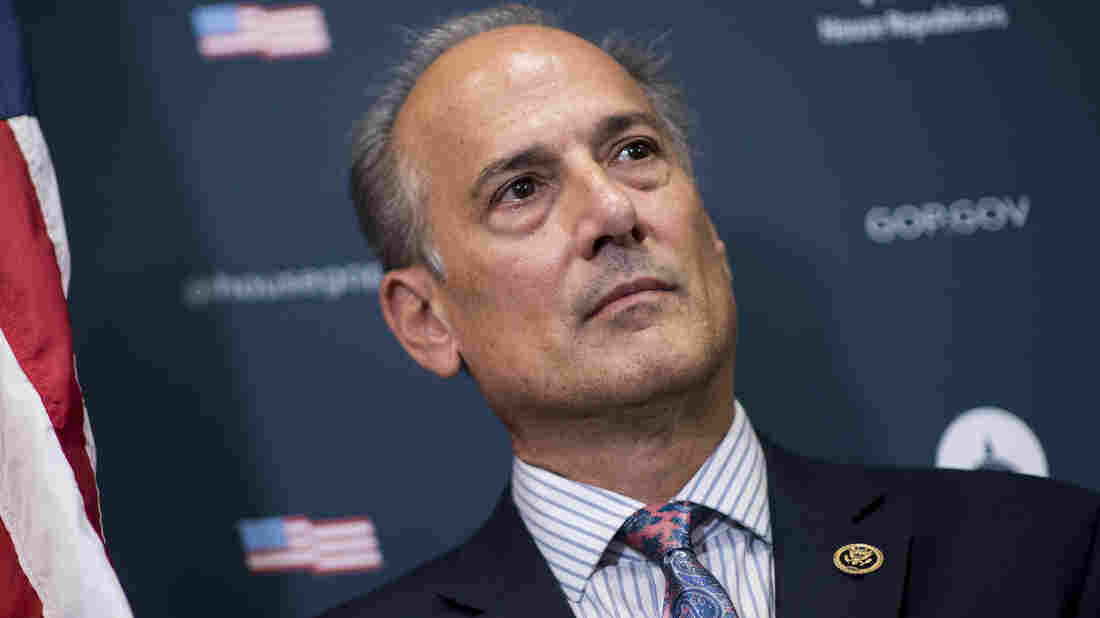 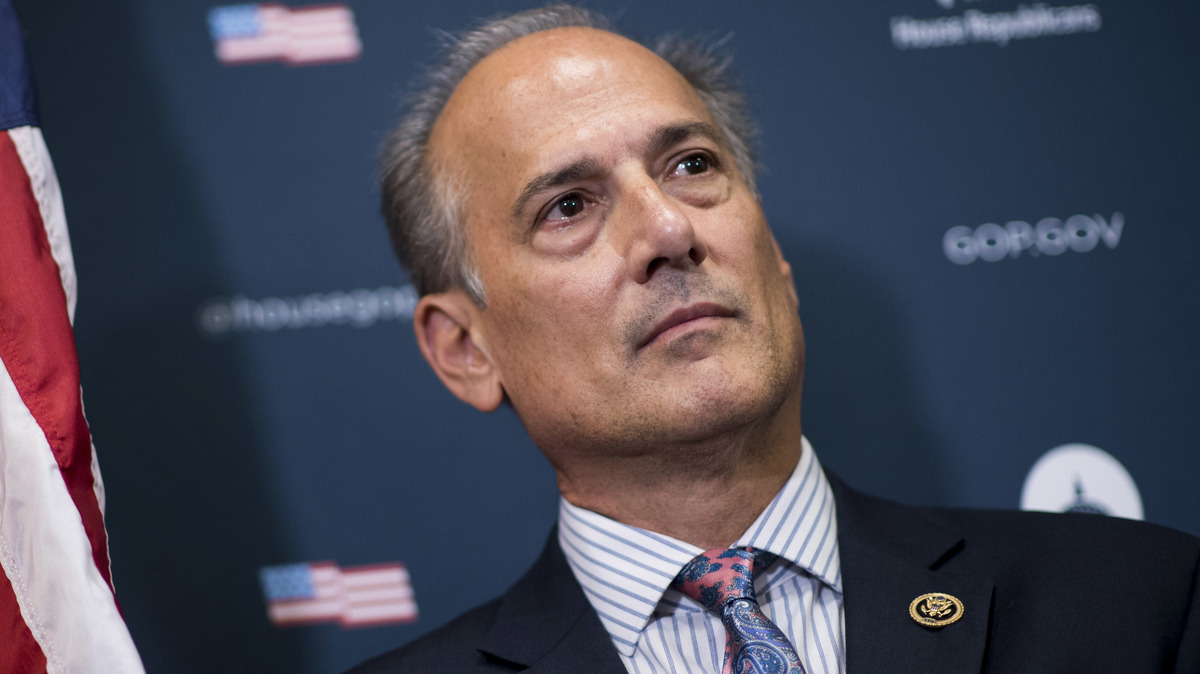 Rep. Tom Marino, R-Pa., was blamed in media reports for sponsoring a bill that the Drug Enforcement Administration had warned would hamper its ability to limit America's deadly opioid crisis.

Rep. Tom Marino, R-Pa., has withdrawn his name from consideration as America's drug czar, President Trump said Tuesday. Marino is stepping back days after reports that legislation he sponsored hindered the Drug Enforcement Administration in its fight against the U.S. opioid crisis.

Rep.Tom Marino has informed me that he is withdrawing his name from consideration as drug czar. Tom is a fine man and a great Congressman!

A joint report by The Washington Post and 60 Minutes found that Marino's measure "helped pump more painkillers into parts of the country that were already in the middle of the opioid crisis," as NPR's Kelly McEvers said earlier this week. The bill had been opposed by the DEA and embraced by companies in the drug industry.

As NPR's White House Correspondent Tamara Keith notes, Marino's withdrawal leaves the Trump administration without nominees for several important domestic roles, including drug czar, the director of the DEA, and secretary of Health and Human Services.

Marino was a main backer of the Ensuring Patient Access and Effective Drug Enforcement Act; among other things, the measure changed the standard for identifying dangers to local communities, from "imminent" threats to "immediate" threats. That change cramped the DEA's authority to go after drug companies that didn't report suspicious — and often very large — orders for narcotics.

After the Post and 60 Minutes report, several members of Congress called for the White House to pull Marino's nomination as drug czar.

Sen. Joe Manchin, D-W.Va., said he was "horrified" by the story, adding that he "cannot believe the last administration did not sound the alarm on how harmful that bill would be for our efforts to effectively fight the opioid epidemic."

In a letter to the president, Manchin wrote about the ability of wholesale drug distributors to send millions of pills into small communities:

"As the report notes, one such company shipped 20 million doses of oxycodone and hydrocodone to pharmacies in West Virginia between 2007 and 2012. This included 11 million doses in one small county with only 25,000 people in the southern part of the state: Mingo County. As the number of pills in my state increased, so did the death toll in our communities, including Mingo County."

After Marino's name was withdrawn, Manchin tweeted to Trump, "thanks for recognizing we need a drug czar who has seen the devastating effects of the problem."

Manchin has co-sponsored legislation that would repeal the changes made by the 2016 law, along with Sen. Claire McCaskill, D-Mo., and Sen. Margaret Wood Hassan, D-N.H.

In the Senate, the drug enforcement bill was sponsored by Sen. Orrin Hatch, R-Utah — who also saw it through the markup process. In Congress and on Twitter, Hatch has defended his role this week, calling the Post story "flawed" and "one-sided."

Hatch also said the bill was supported by patient groups who "were concerned about DEA's unfettered enforcement authority."

Fourth, President Obama signed this bill into law. DEA and DOJ, who work for the President, could have urged him to veto it. They did not. pic.twitter.com/ZLE6el0I19

"I spent months negotiating with DEA and with DOJ until they were at a point where they were comfortable allowing the bill to proceed," Hatch said Monday on Capitol Hill. "If they had asked me to hold the bill or to continue negotiations, I would have done so."

Hatch noted via Twitter that "President Obama signed this bill into law. DEA and DOJ, who work for the President, could have urged him to veto it. They did not."

Tens of thousands of Americans are dying from drug overdoses each year. In its preliminary report about the opioid crisis, President Trump's Commission on Combating Drug Addiction and the Opioid Crisis said in August that "with approximately 142 Americans dying every day, America is enduring a death toll equal to Sept. 11 every three weeks."

In an interview with NPR, here's how Post reporter Scott Higham described the way in which Marino's bill became law:

"We've obtained internal memos, emails, other documents from the DEA and from the Justice Department that show that the DEA and the Department of Justice for many years was opposed to this. They had written memos. They had written emails saying this is going to upend our ability to go after these companies. Why are you doing this? And Marino had introduced this legislation in 2014, and the DEA got it killed; and in 2015, and the DEA got it killed.

"And then there was a change in leadership. Eric Holder stepped down. Loretta Lynch took over the AG's office. And then there was a new DEA administrator who came in who said that, I think that we need to work with these people. And there was also enormous amounts of pressure being placed on the DEA by Capitol Hill to pass this bill. And it was at the behest of the pharmaceutical industry. In fact, the bill was written by a pharmaceutical industry attorney [D. Linden Barber] who used to be a DEA attorney ... a senior DEA attorney. So it's, you know, the classic kind of revolving door in Washington."

The president had nominated Marino to lead the White House Office of National Drug Control Policy. In his tweet announcing Marino's decision to withdraw Tuesday morning, Trump added, "Tom is a fine man and a great Congressman!"

The opioid story was revealed by whistleblower Joe Rannazzisi, a former high-ranking DEA official, who told 60 Minutes, "This is an industry that allowed millions and millions of drugs to go into bad pharmacies and doctors' offices, that distributed them out to people who had no legitimate need for those drugs."

Rannazzisi said he was in "total disbelief" when the White House announced that Trump had chosen to nominate Marino, adding, "The bill was bad. Him being the drug czar is a lot worse."