Accessibility links
Federal Judge In Hawaii Blocks Trump's Third Attempt At Travel Ban : The Two-Way President Trump's third executive order restricting travel from some countries to the U.S. was to go into effect on Wednesday. The judge didn't rule on the limits affecting North Korea and Venezuela. 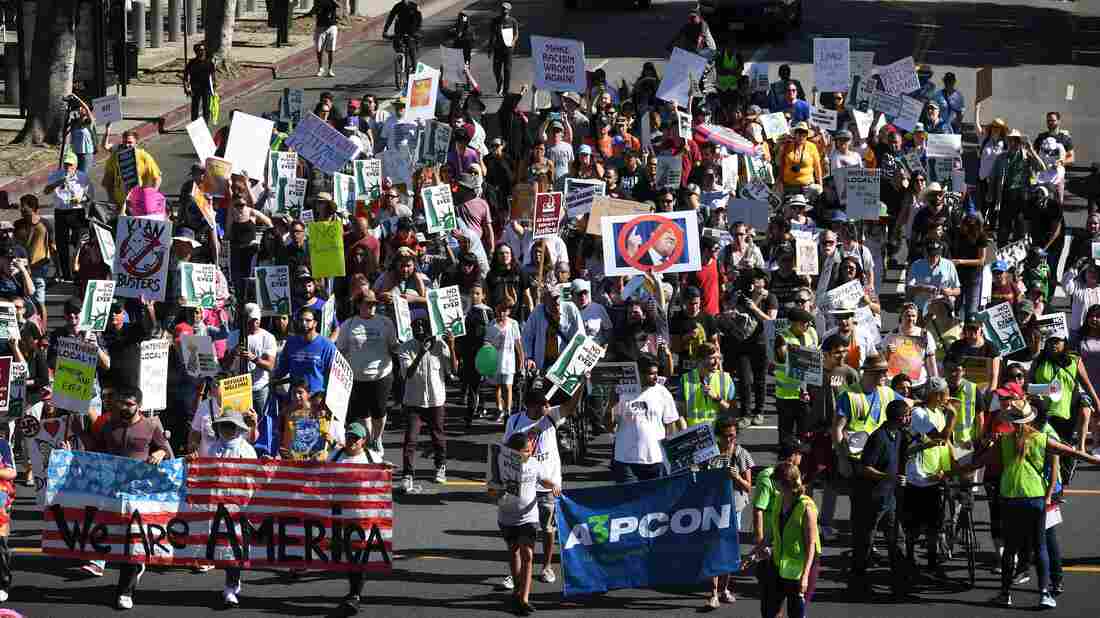 People marching in the "#NoMuslimBanEver" rally in downtown Los Angeles on Sunday. Organized by the Council on American-Islamic Relations, the march was in response to President Trump's most recent travel ban, which has now been partially blocked by a federal judge in Hawaii. Mark Ralston/AFP/Getty Images hide caption 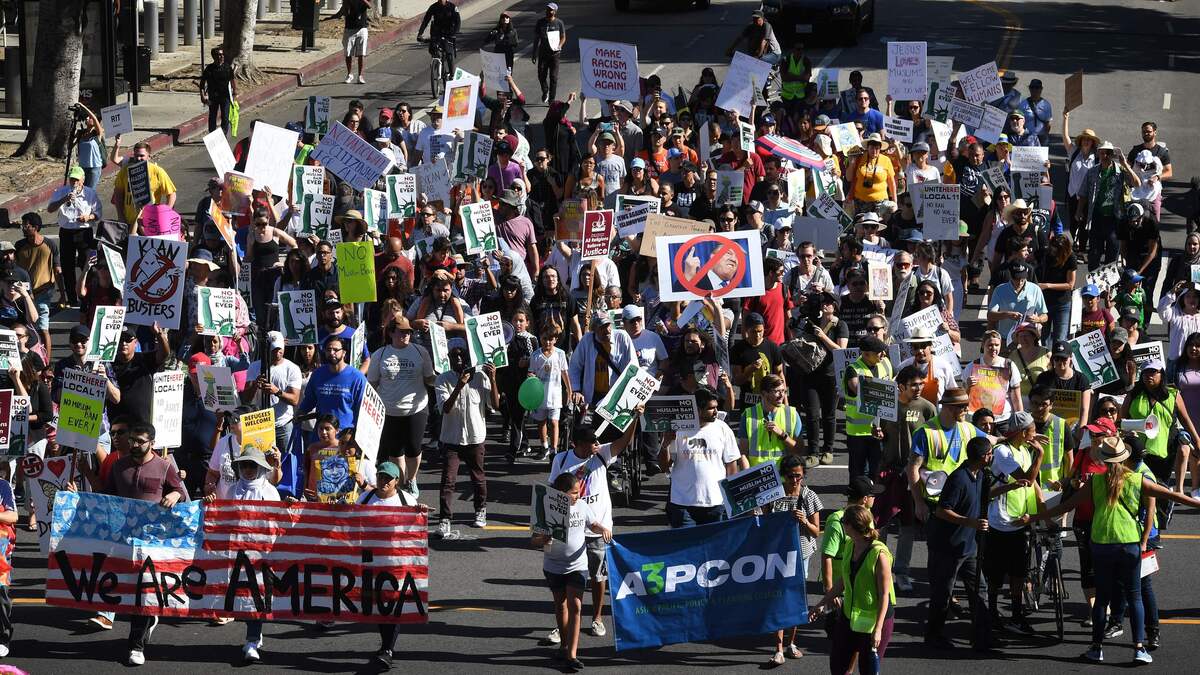 People marching in the "#NoMuslimBanEver" rally in downtown Los Angeles on Sunday. Organized by the Council on American-Islamic Relations, the march was in response to President Trump's most recent travel ban, which has now been partially blocked by a federal judge in Hawaii.

A federal judge in Hawaii has partially blocked President Trump's third attempt to restrict entry into the U.S. for citizens of certain countries. The Department of Justice says it plans to appeal.

The newest version of the travel ban was due to go into effect on Wednesday. Like two previous executive orders, it was challenged in multiple courts. The new ruling by Judge Derrick K. Watson is only one piece of the complicated legal puzzle over the long-term fate of the president's efforts to limit travel to the U.S.

In his ruling, Watson wrote that the third version of the ban, like those before it, "lacks sufficient findings that the entry of more than 150 million nationals from six specified countries would be 'detrimental to the interests of the United States,' " evidence that he says would be necessary for the ban to be enforceable.

As a result, he issued a temporary restraining order that will keep the ban from being enforced for six of the eight named countries — the six majority-Muslim nations. North Korea and Venezuela, which were added in the most recent version of the ban, are not affected by the ruling, and the restrictions on travel from those countries can go into effect.

The Department of Justice said in a statement that the ruling "is incorrect, fails to properly respect the separation of powers, and has the potential to cause serious negative consequences for our national security."

The White House, in a separate statement, said the judge's decision is "dangerously flawed."

"The entry restrictions in the proclamation apply to countries based on their inability or unwillingness to share critical information necessary to safely vet applications, as well as a threat assessment related to terrorism, instability, and other grave national security concerns," the White House says. "These restrictions are vital to ensuring that foreign nations comply with the minimum security standards required for the integrity of our immigration system and the security of our Nation."

The ruling in Hawaii v. Trump is the latest in the legal tug of war over Trump's attempt to impose a ban on travelers from predominantly Muslim nations.

And this temporary restraining order is far from the end of the story. The Department of Justice says it will appeal the decision, and another federal court is also expected to rule on the third version of the ban.

The original ban, signed by the president in the first week of his term, targeted seven countries — Syria, Iraq, Iran, Libya, Yemen, Somalia and Sudan — for 90 days. Syrian refugees were banned indefinitely. The ban also was imposed on lawful permanent residents, commonly known as green card holders, and travelers who had valid visas issued before the ban was to be implemented. That action met with immediate resistance as protesters flooded airports in major cities in support of travelers from those countries. Legal challenges to this first ban were successful as a federal district court and the 9th Circuit Court of Appeals blocked it.

In early March, Trump signed a new executive order. As NPR's Joel Rose reported, "There are some key differences between Trump's original order and this one. It applies only to people from six majority-Muslim countries. Iraq has been dropped from the list. Lawful permanent residents or green card holders are explicitly exempt. So are travelers who already have valid visas. And refugees from Syria are no longer banned indefinitely, though the U.S. refugee program is still suspended for 120 days and the number of refugees admitted this year cut by more than half."

Watson, the judge in Hawaii, blocked that second travel ban too, saying that it was unconstitutional because it disfavored a particular religion. A court in Maryland came to the same conclusion. The parallel rulings were upheld by appellate courts.

That set the stage for the U.S. Supreme Court to intervene. In late June, the justices allowed Trump's travel ban to take partial effect, but they allowed people with "close familial relationships" with someone in the U.S. to enter the country.

The debate then turned on which familial relationships would be considered valid. The administration interpreted that decision as favoring only certain family members such as parents, spouses, children, adult sons or daughters, sons- and daughters-in-laws, siblings and fiances/fiancees.

In September, the 9th Circuit ruled the government couldn't bar entry to grandparents and other extended family members. However, the Supreme Court did allow the administration to ban refugees even if they had formal ties to U.S. resettlement agencies.

"The latest version of the travel ban — version 3.0, if you will — limits travel from Iran, Libya, Syria, Somalia and Yemen. The nations of Chad, North Korea and Venezuela have been added. And Sudan, which was part of the original ban, has been dropped.

"The new rules take effect Oct. 18. And unlike previous versions, the new ban is not temporary. It will remain in place until the affected nations comply with stringent requirements for vetting their citizens before they can receive visas to enter the U.S."

That's the version of the ban that has now been blocked from going into effect, nationwide — at least for now.

However, the state of Hawaii did not challenge the ban as it applies to North Koreans or Venezuelans. Therefore, the judge's restraining order does not apply to those portions of the ban, which can be enforced starting Wednesday.