Accessibility links
NFL And Players Meet, But Punt On Anthem Controversy : The Two-Way There were hopes that an NFL meeting would bring some clarity in the league's policy that says players "should" stand during the traditional pregame performance of 'The Star-Spangled Banner."

NFL And Players Meet, But Punt On Anthem Controversy

NFL And Players Meet, But Punt On Anthem Controversy 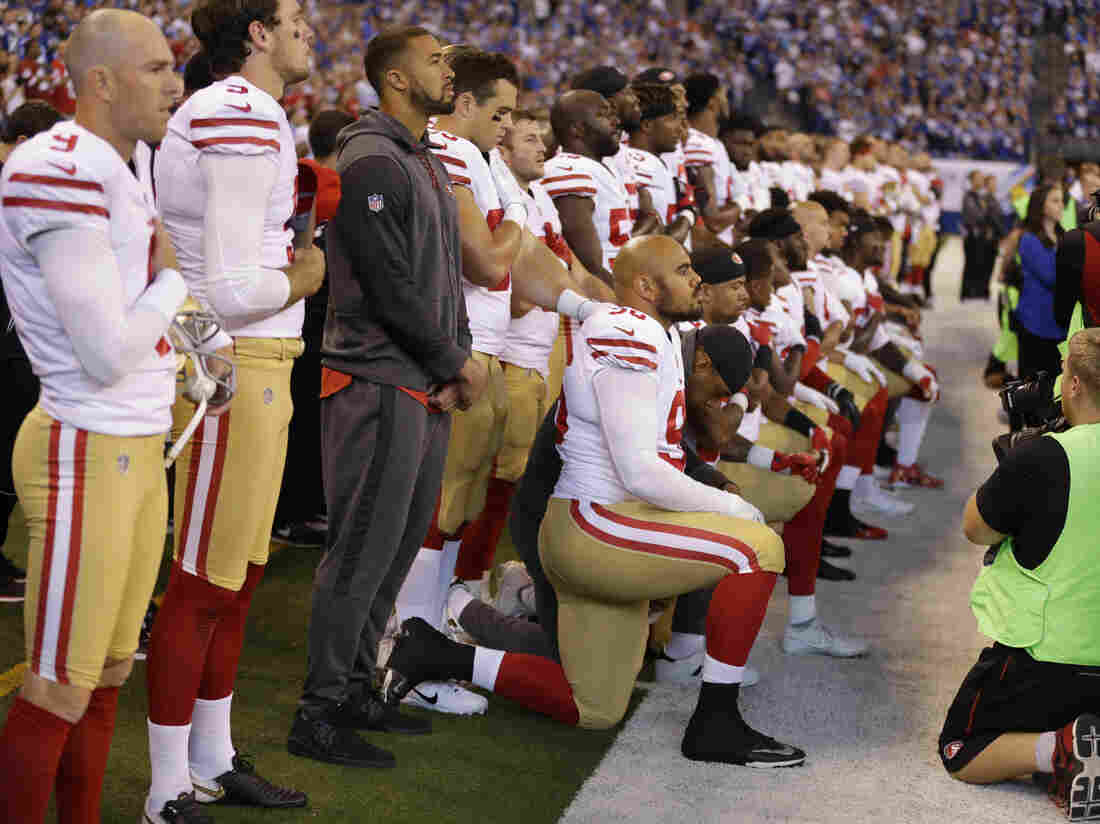 Members of the San Francisco 49ers kneel during the playing of the national anthem before an NFL football game against the Indianapolis Colts, earlier this month. Michael Conroy/AP hide caption 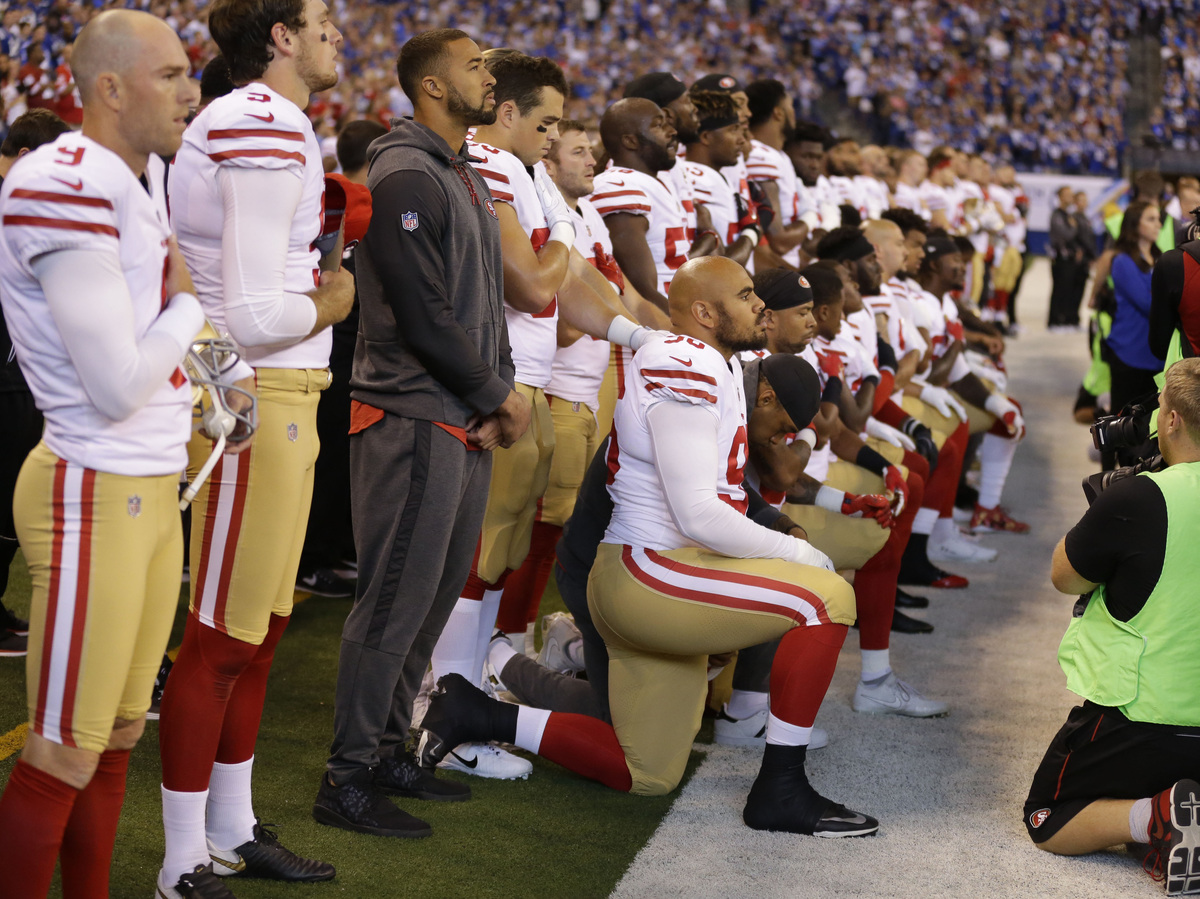 Members of the San Francisco 49ers kneel during the playing of the national anthem before an NFL football game against the Indianapolis Colts, earlier this month.

NFL owners and players met at league headquarters in New York on Tuesday but put forward no policy changes regarding the controversial player protests during the national anthem.

NFL commissioner Roger Goodell told reporters Wednesday that the participants did not discuss the idea of team owners disciplining players for protesting, saying that it "wasn't necessary."

"Everyone should stand for the national anthem," Goodell said. "We all feel very strongly about our country and our pride, and we're going to continue to do that."

In terms of the protesting players, he said, "what we've tried to do is deal with the underlying issue and understand what they're protesting and try to address that matter." Goodell stated that currently "six or seven" players are participating in the protests.

He called the dialogue unprecedented, "between our players, between our owners, between our club officials, between the league. And that is a really positive change for us, that we think is ultimately going to pay dividends."

Eleven owners and 13 players attended the meeting that lasted for several hours and was variously described as "positive" and "constructive," but didn't signal any changes on the protests that have seen players take a knee, sit or raise fists during pregame renditions of the national anthem to protest against racial inequality and police shootings of unarmed black men.

"We heard what they had to say and they heard us," Miami Dolphins owner Stephen Ross said. "It's open talks and that's a good thing."

Goodell had previously said the league "did not ask" for any change to the policy on the national anthem. That policy says players "should" stand for performance of "The Star-Spangled Banner," but in the wake of the protests, some have suggested changing that language to "must."

The NFL Players Association union and the league issued a joint statement, saying the sides came together "to promote positive social change and address inequality in our communities."

"NFL executives and owners joined NFLPA executives and player leaders to review and discuss plans to utilize our platform to promote equality and effectuate positive change. We agreed that these are common issues and pledged to meet again to continue this work together," the statement read.

"As we said last week, everyone who is part of our NFL community has a tremendous respect for our country, our flag, our anthem and our military. In the best American tradition, we are coming together to find common ground and commit to the hard work required for positive change," it continued.

Last week, Commissioner Goodell said in a memo to the teams that the league prefers for players to stand during the anthem.

Philadelphia Eagles safety Malcolm Jenkins, who has been a leading spokesman for the players on this issue, said the discussion covered "everything to do with the state of the NFL now, obviously anthem protests, activism that players have been doing, and how we can move this forward to really amplify players' voices and amplify these issues and make some long sustainable changes."

Why Kaepernick Is Unsigned: Performance Or Politics?

"I'm not sure we're close to a resolution, but conversations are ongoing," he added.

Indianapolis Colts defensive back Darius Butler told Sports Illustrated that it was a good dialogue, adding, "it's not going to be fixed overnight."

The protests were touched off a year ago when then-San Francisco 49ers Quarterback Colin Kaepernick began taking a knee for the anthem. When President Trump weighed in last month saying owners should "fire" players for such protests, the issue snowballed into a national debate over those who see the matter as one of free speech and others who see it as a lack of respect for the flag and the national anthem.

Kaepernick, who became a free agent this season has remained unsigned. Earlier this week his attorney said he was filing a grievance against the NFL and owners for allegedly conspiring to shut him out of the league over the protests.