Accessibility links
Travel Ban Block: Federal Judge In Maryland Grants Injunction On Trump's Latest Attempt : The Two-Way The plaintiffs "have established that they are likely to succeed on the merits," District Judge Theodore D. Chuang wrote, dealing another setback to the Trump administration. 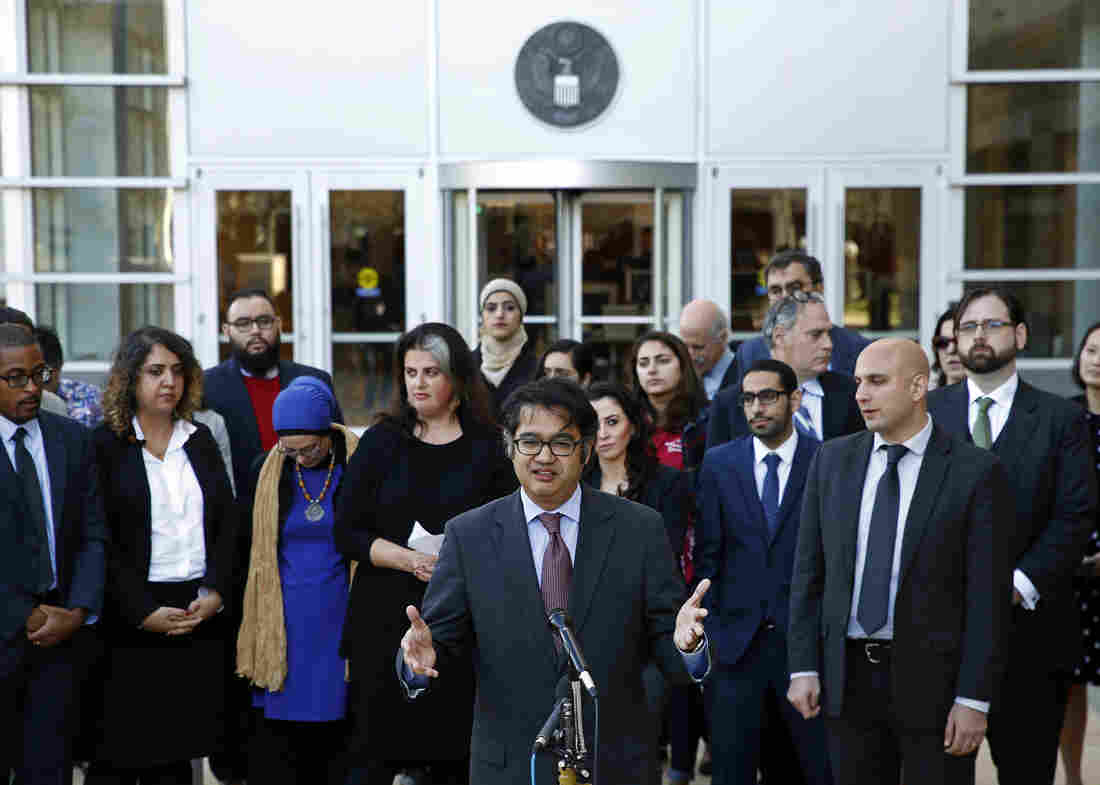 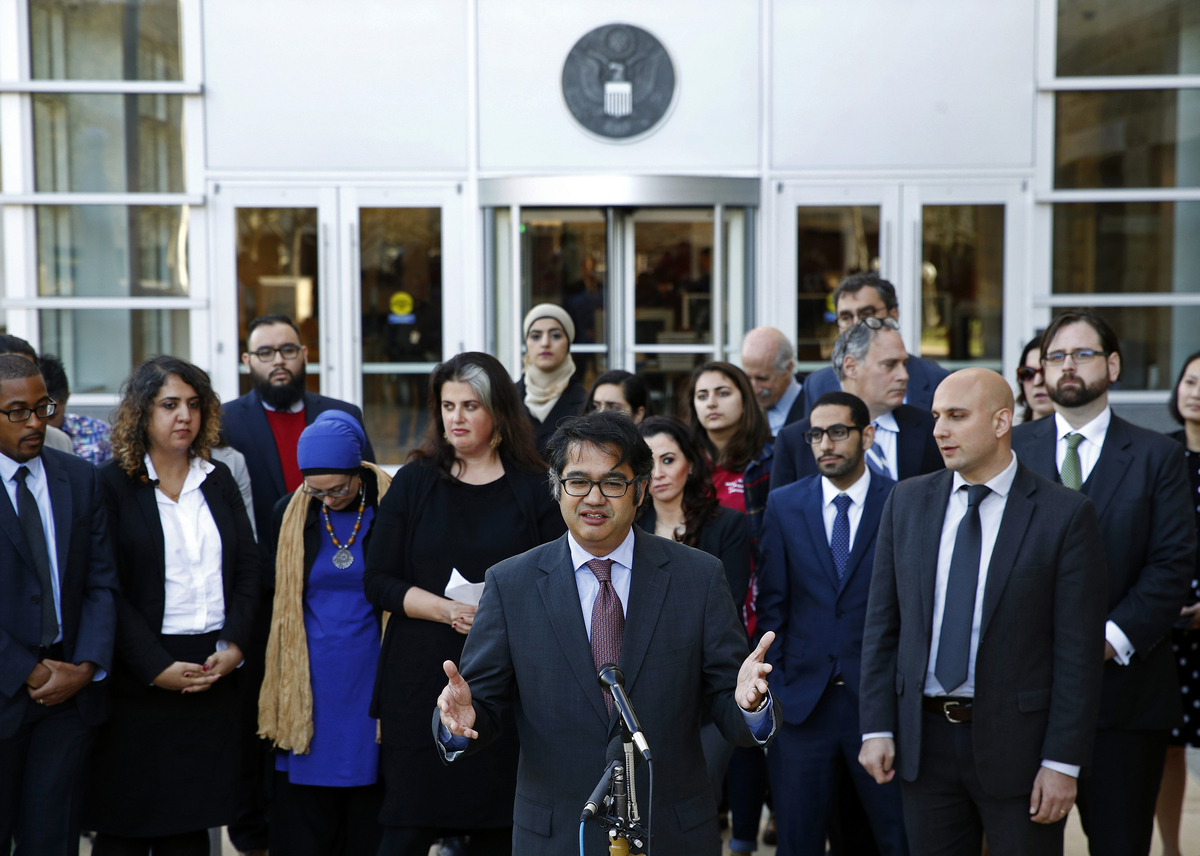 A federal judge in Maryland has blocked parts of President Trump's most recent attempt to impose broad limits on who can enter the U.S., granting a motion for a preliminary injunction that was filed by plaintiffs led by the International Refugee Assistance Project.

The plaintiffs "have established that they are likely to succeed on the merits," District Judge Theodore D. Chuang wrote in the Tuesday order dealing another setback to the Trump administration's attempt to ban travel to the U.S. by citizens of certain countries.

In his ruling, Chuang wrote that President Trump's own tweets helped convince him that the latest policy is an "inextricable re-animation of the twice-enjoined Muslim ban" that Trump called for on the campaign trail and is therefore likely to be found unconstitutional.

Chuang said the plaintiffs "are likely to suffer irreparable harm in the absence of injunctive relief, and that the balance of the equities and the public interest favor an injunction."

The judge's order was filed one day before Trump's ban was set to take effect. It follows a similar order Tuesday from a federal judge in Hawaii in a related case.

This is the third time the administration's proposed travel restrictions have been put on hold by the courts. Both judges say the latest version suffers from the same problems as the first two.

The Maryland injunction is the more limited of this week's rulings. It would allow some of the administration's new restrictions to take effect, but only for people who lack "a credible claim of a bona fide relationship with a person or entity in the United States" — echoing the language used by the Supreme Court when it partially restored a portion of an earlier travel ban in June.

The two cases had been on the Supreme Court's calendar for the current term, but the court removed them "pending further order" in September, after Trump issued a revised and expanded ban.

The president's ban primarily targeted people from Muslim-majority countries — Chad, Iran, Libya, Somalia, Syria and Yemen. In an apparent attempt to avoid the "Muslim ban" label that was applied to previous restrictions, Trump's proclamation also included citizens of North Korea and some officials of Venezuela's government.

In both Maryland and Hawaii, the judges limited their latest rulings to travelers from the six Muslim-majority countries on the list. North Korea and Venezuela are not affected by these rulings; the restrictions on travel from those countries can go into effect.

In his memorandum opinion, Chuang noted that then-candidate Trump posted a document called "Statement on Preventing Muslim Immigration" on his website in December 2015. He also traced other references by Trump, including repeated calls for keeping Muslims out of the U.S. and, once in office, an embrace of the presidential order as a "travel ban."

After federal judges blocked the president's earlier executive orders, Trump tweeted that the ban should be larger and tougher. "This Court is obligated to pay attention to such statements," Chuang wrote.

The American Civil Liberties Union has been arguing the case on behalf of the IRAP. Omar Jadwat, director of the ACLU's Immigrants' Rights Project, said Wednesday, "Like the two versions before it, President Trump's latest travel ban is still a Muslim ban at its core. And like the two before it, this one is going down to defeat in the courts. Religious discrimination with window dressing is still unconstitutional."

Trump's latest attempt at a travel ban came in late September, when he issued Presidential Proclamation 9645, titled Enhancing Vetting Capabilities and Processes for Detecting Attempted Entry Into the United States by Terrorists or Other Public-Safety Threats.

In the most recent iteration of the ban, five of the countries had been named in previous versions; a sixth country, Chad, was added to the list, while Sudan was removed.

Despite those changes, the courts found the ban to be tainted by the same problems that tripped up the administration's earlier travel ban orders.

"To the extent that the Government might have provided additional evidence to establish that national security is now the primary purpose for the travel ban, it has not done so," Chuang wrote in his ruling.

The Trump administration justified the new travel restrictions in part by referring to a classified report issued by the Department of Homeland Security, dated Sept. 15. But, Chuang notes, the administration did not share that report with the court.

Chuang also seems skeptical that the administration has applied its own security findings consistently. For example, Somalia was found to have adequate information-sharing practices, but it is still included in the total ban on immigration. The administration found that Venezuela, meanwhile, has inadequate information-sharing practices — but only government officials are barred from entry to the U.S.

The Justice Department is expected to appeal both rulings, meaning this version of the travel ban may also be headed for the Supreme Court.