Accessibility links
Declassified Files Lay Bare U.S. Knowledge Of Mass Murders In Indonesia : The Two-Way The Indonesian military systematically killed at least half a million people in the 1960s. Documents released Tuesday show U.S. officials knew about it from the start — and stood by as it unfolded. 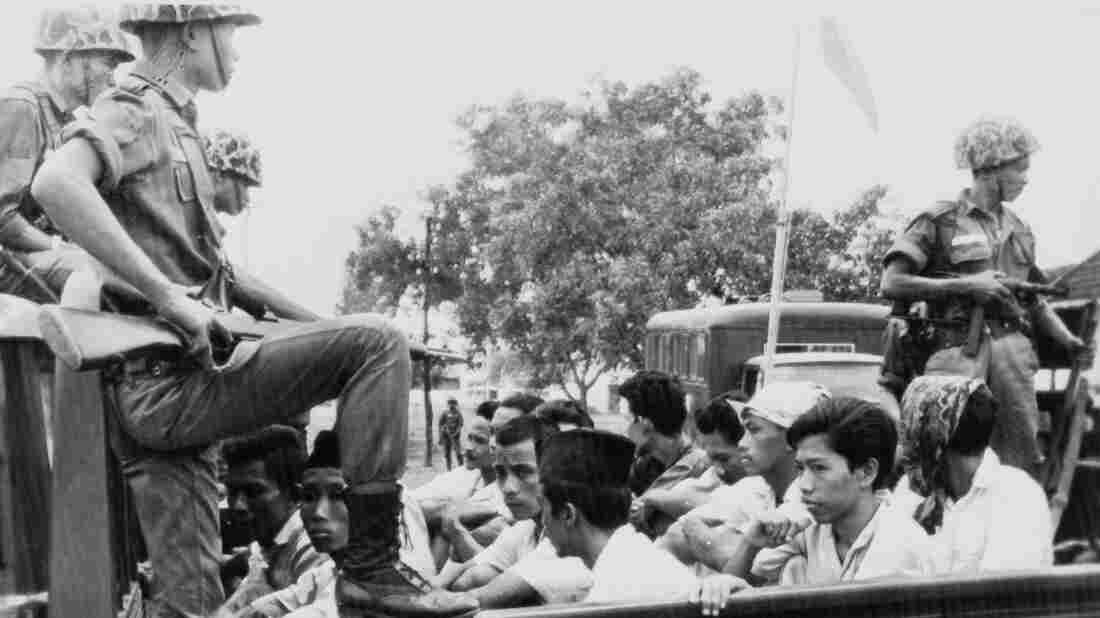 Indonesian soldiers stand guard over members of the youth wing of the Indonesian Communist Party, who were packed into a truck to be taken to a Jakarta prison in October 1965. Over the next few months, the government's military leadership carried out the systematic execution of hundreds of thousands of people. /AP hide caption 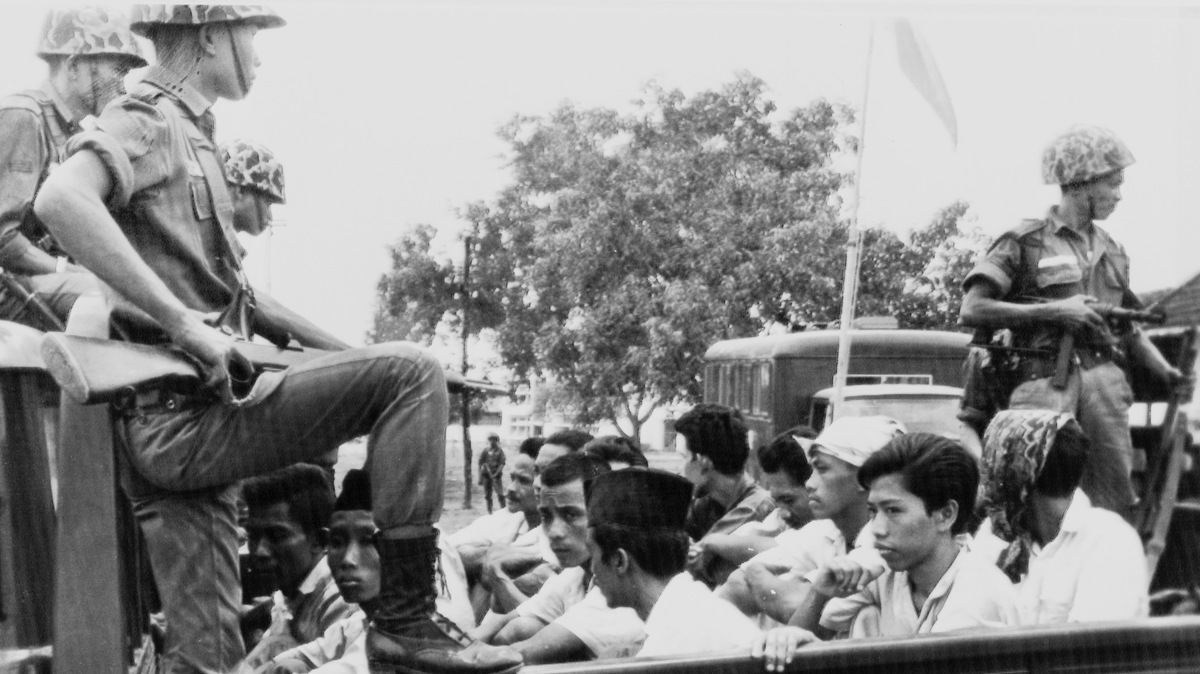 Indonesian soldiers stand guard over members of the youth wing of the Indonesian Communist Party, who were packed into a truck to be taken to a Jakarta prison in October 1965. Over the next few months, the government's military leadership carried out the systematic execution of hundreds of thousands of people.

By the end of November 1965, U.S. officials were well aware that mass murders were underway. At this point, roughly two months into an Indonesian military campaign that would ultimately kill at least half a million people, U.S. Embassy staff privately expressed no shock in reporting that thousands had already been summarily executed.

They did comment on the resourcefulness of the killers, though.

The "main problem" with the military effort to repress the Indonesian Communist Party, or PKI, was "what to feed and where to house the prisoners," the U.S. Embassy in Jakarta noted in a memo to the State Department dated Nov. 30. "Many provinces appear to be successfully meeting this problem by executing their PKI prisoners, or by killing them before they are captured, a task in which Moslem youth groups are providing assistance."

The formerly classified memo was one of 39 documents made available online Tuesday by the non-profit group National Security Archive. Those documents — along with nearly 30,000 pages of files in the daily record of the U.S. Embassy in Jakarta from 1964 to '68 — were recently processed by the federal government's National Declassification Center and digitized by scholars.

From embassy to State Department, Nov. 30

At the time these memos were sent, from the closing months of 1965 through the opening months of 1966, the Indonesian military was engaged in a brutal crackdown on its communist party and suspected supporters. Prompted by an alleged coup attempt, the military collaborated with Muslim militias in the systematic murder of at least 500,000 people and the imprisonment of even more.

The CIA would later describe the atrocities as "one of the worst mass murders of the twentieth century, along with the Soviet purges of the 1930s, the Nazi mass murders during the Second World War, and the Maoist bloodbath of the early 1950s."

And while it's been known for some time the U.S. was aware — and was reportedly at times even an active supporter — of the crackdown as it unfolded, scholar Brad Simpson tells NPR the newly available documents "show in even greater detail how the U.S. Embassy was receiving a stream of updates and intelligence information about the scope and extent of the killing from the very start."

Simpson, director of the National Security Archive's Indonesia/East Timor Documentation Project, says the U.S. maintained a policy of public silence, even as he says Washington quietly began supporting Indonesia "in the form of financial assets and communications equipment" in late October 1965. This was around the same time one Indonesian official told embassy staff "that the Army had already executed many communists but that this fact must be very closely held."

One month later, another declassified consular dispatch from the city of Surabaya reported the scene there: 25 bodies spotted floating in a river by a missionary, 29 more spotted in the river by another, at least five railway stations closed, with employees afraid to come to work "since some of them have been murdered."

From consulate in Surabaya to Embassy, Nov. 26

One of the missionaries "heard largest slaughter had taken place at Tulungagung where reportedly 15000 Communists killed," according to the cable.

Late in December, less than a month later, the embassy told the State Department of the "striking Army success" in consolidating power: Despite Indonesian President Sukarno's protests against the military's "jolts" against the PKI, those jolts had continued, resulting "in an estimated 100,000 deaths."

At least the killings were being carried out "evidently on lesser scale and in more discreet manner," the U.S. consul in Surabaya observed at the end of the month. "Generally victims are taken out of populous areas before being killed and bodies are being buried rather than thrown into river." 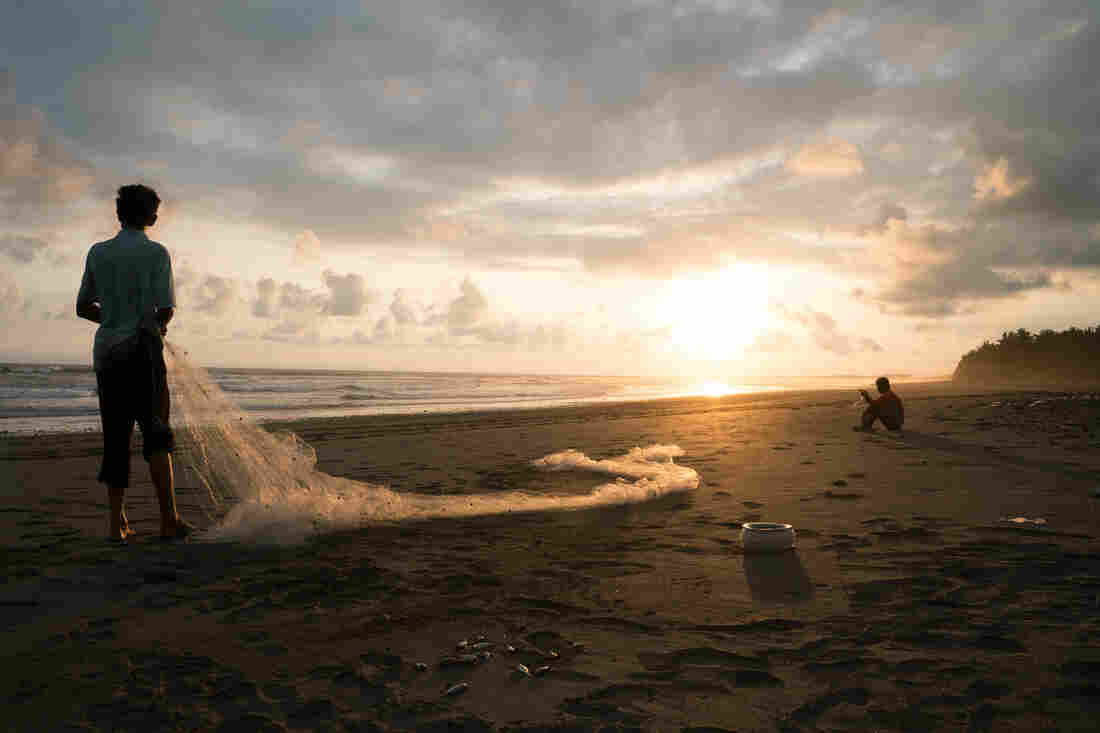 Two men rest on a beach in Bali, Indonesia, where human bones were found in the 1990s. More bones have been recovered there since then, which villagers have reburied. The site is believed to be one of the mass graves for victims of the anti-communist atrocities. Claire Harbage/NPR hide caption 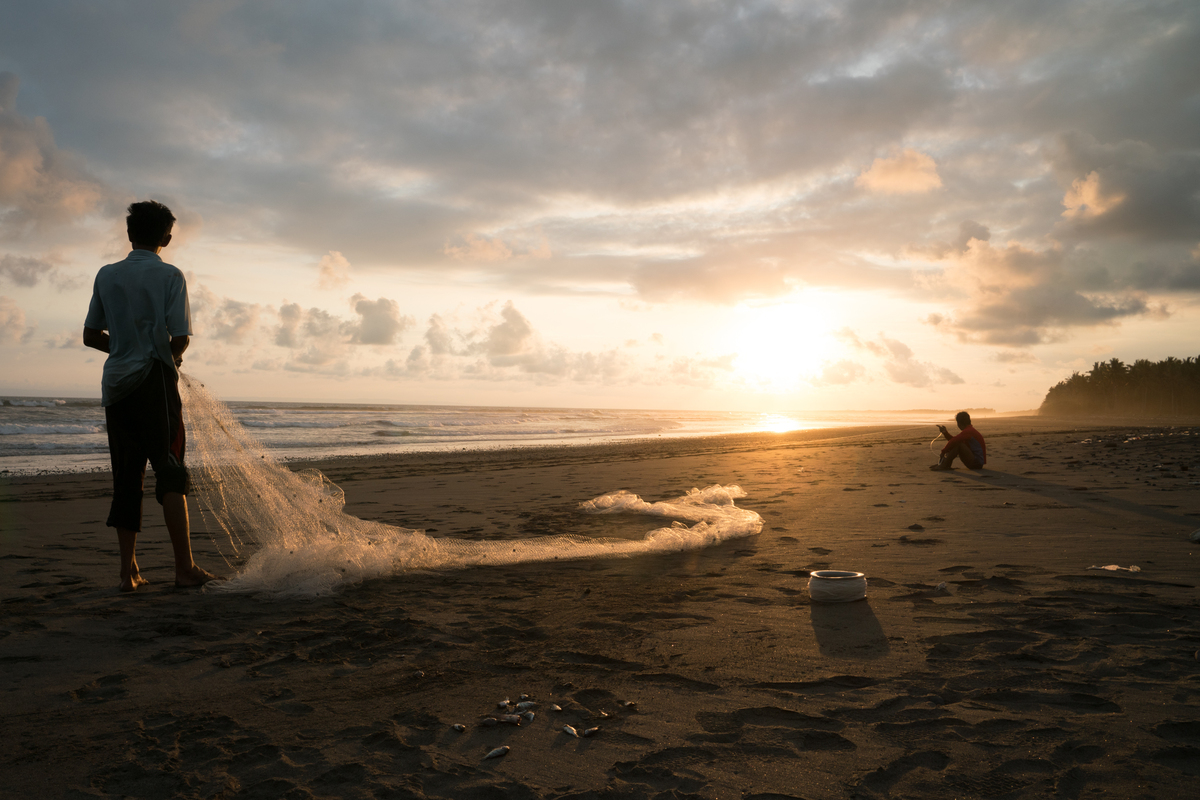 Two men rest on a beach in Bali, Indonesia, where human bones were found in the 1990s. More bones have been recovered there since then, which villagers have reburied. The site is believed to be one of the mass graves for victims of the anti-communist atrocities.

The other side of a "gleam of light"

In June 1966, several months after Sukarno had effectively ceded his authority to Gen. Suharto, the military leader guiding the killings, Pulitzer Prize-winning journalist James Reston could write with guarded optimism about Indonesia. It was a "savage transformation," as Americans already knew then, but Reston expressed relief that now "the control of this large and strategic archipelago is no longer in the hands of men fiercely hostile to the United States."

At a time when the Cold War fortunes of the U.S. seemed at a nadir, just as the "troubles in Vietnam" were becoming glaringly apparent, Indonesia represented a "gleam of light in Asia," as Reston's headline suggests. It was a sign that some "Asian nations are at least beginning to think about cooperating in the defense of their own part of the world."

But the newly released embassy memos appear to undercut the military's stated reason for the crackdown — that it was defending against a vast communist conspiracy to seize power in the country.

The crackdown itself had begun shortly after the kidnapping and murder of six high-ranking generals on Sept. 30, 1965, apparently by members of the Communist Party. And the military argued that the group behind the kidnapping, known as the September 30 Movement, had been backed by the millions of members of the party and even Communist China. Those claims were reflected in articles duplicated by U.S. diplomats and forwarded to Washington.

From embassy to State Department, Dec. 21

Still, Simpson points out that the memos show U.S. officials at the time were "receiving intelligence from journalists and others to the extent that PKI leaders and cadres raised in the countryside seemed totally unaware of the existence of the September 30 Movement."

And while a spring 1966 telegram to the State Department noted there was reason to suspect China had advance knowledge of the Movement and perhaps even supplied some weapons, embassy staff said "we do not think the Chinese were a primary factor in the September 30 Movement."

From embassy to State Department, spring 1966

"The exact mixture of ingredients in the Indonesian description of the September 30 Movement tends to shift somewhat from time to time depending on the propaganda needs of the moment," the same memo acknowledges.

Simpson is blunt in spelling out what he sees as the implications of these memos.

"It suggests that the U.S. was a supporter — an enthusiastic supporter — of a campaign of mass murder against the unarmed civilians whose only crime was belonging to a political party that was on the wrong side of the Cold War." 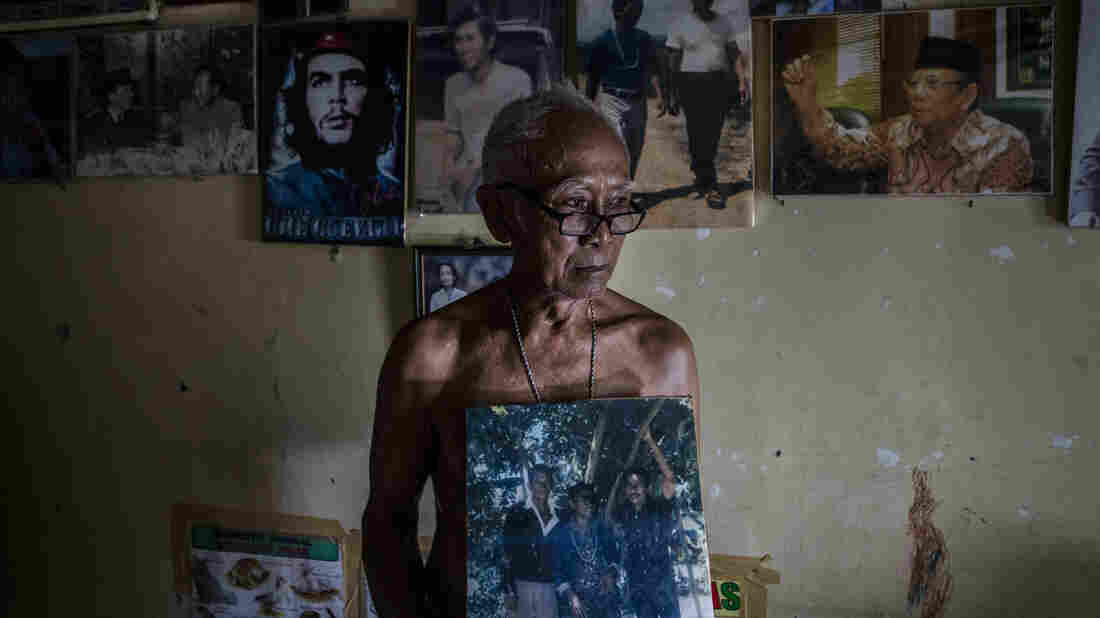 A former prisoner holds a photo of his fellow inmates during his 14-year imprisonment for suspected communist ties. Ulet Ifansasti/Getty Images hide caption 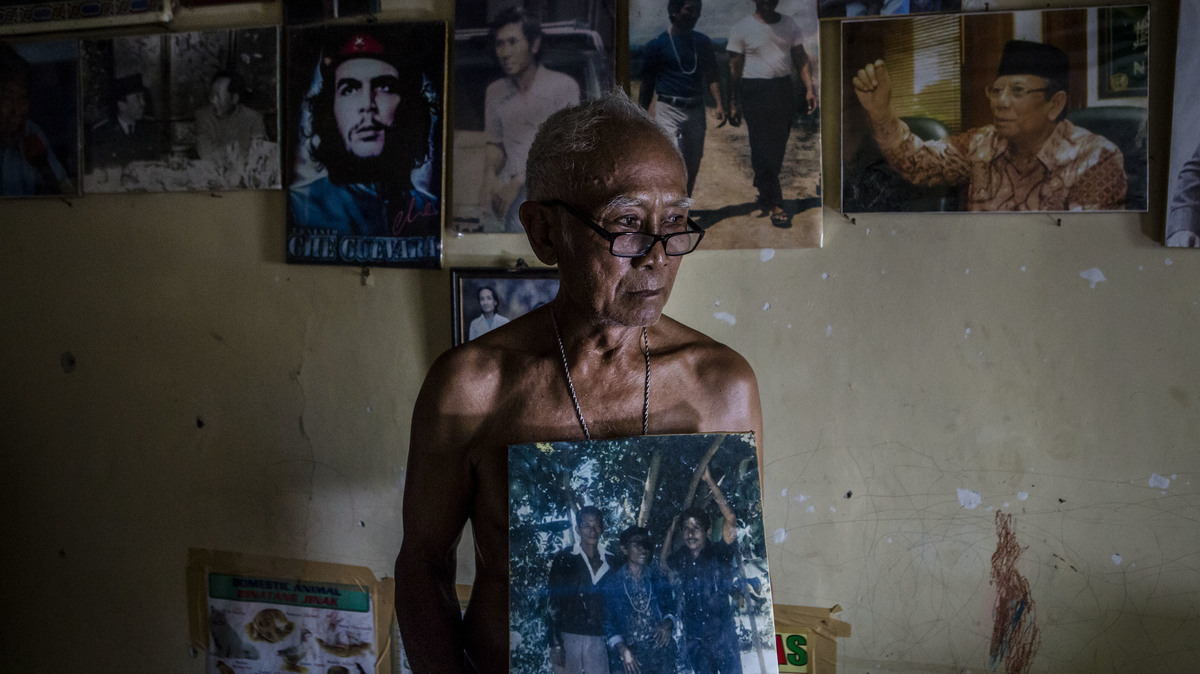 A former prisoner holds a photo of his fellow inmates during his 14-year imprisonment for suspected communist ties.

"Hopefully ... the truth can emerge"

The effort to process and digitize the documents began during the Obama administration, Simpson says, and it was urged on by Sen. Tom Udall of New Mexico and the popular sentiment mobilized by Joshua Oppenheimer's documentaries on the mass murders. At least 1,500 pages of documents still under review are expected to be released in the coming months.

The State Department told The New York Times it is aware of the documents made available by the National Security Archive and supports their release.

"The State Department supports the declassification of any relevant documents from the period which do not pose a national security risk," a spokeswoman said in a statement to the paper.

"The mass killings of 1965-66 are among the world's worst crimes against humanity, and our country's darkest secret," Veronica Koman, an Indonesian human rights lawyer, told The Associated Press.

Under Suharto's rule, which would last for more than three decades after his rise to power, the topic of the killings was regarded as taboo. Even these days, the BBC reports Oppenheimer's The Act of Killing is "among a list of films about the killings banned in Indonesia."

"The 1965-66 survivors are all very old now, and I'm afraid that they will not see justice before they die," Koman continued. "Hopefully with these cables coming to light, the truth can emerge and perpetrators can be held accountable."

"The US government now needs to release the remaining documents, not only for the historical record of one of the 20th century's worst atrocities, but as a long overdue step toward bringing redress to the victims."