Accessibility links
Wounded Mandalay Bay Security Guard Gives 1st Media Interview On 'Ellen' : The Two-Way After he was shot, Jesus Campos yelled "Take cover!" at a hotel engineer and a guest as the Las Vegas gunman sprayed bullets into the hall. His account added detail to the timeline of events Oct. 1. 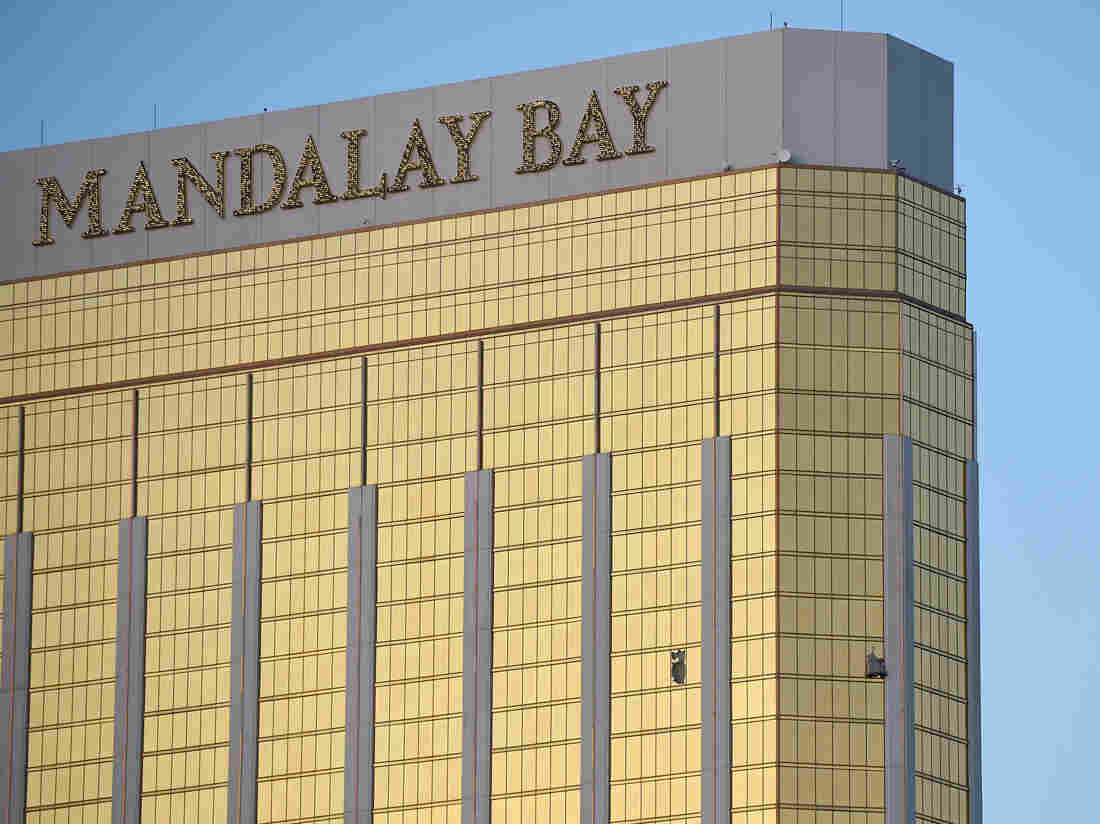 Jesus Campos, the hotel security guard who was shot the night that Stephen Paddock killed 58 people, gave his first media interview to Ellen DeGeneres. The shooter fired from windows he broke in a suite at the Mandalay Bay, pictured on Oct. 2, the day after the massacre. David Becker/Getty Images hide caption 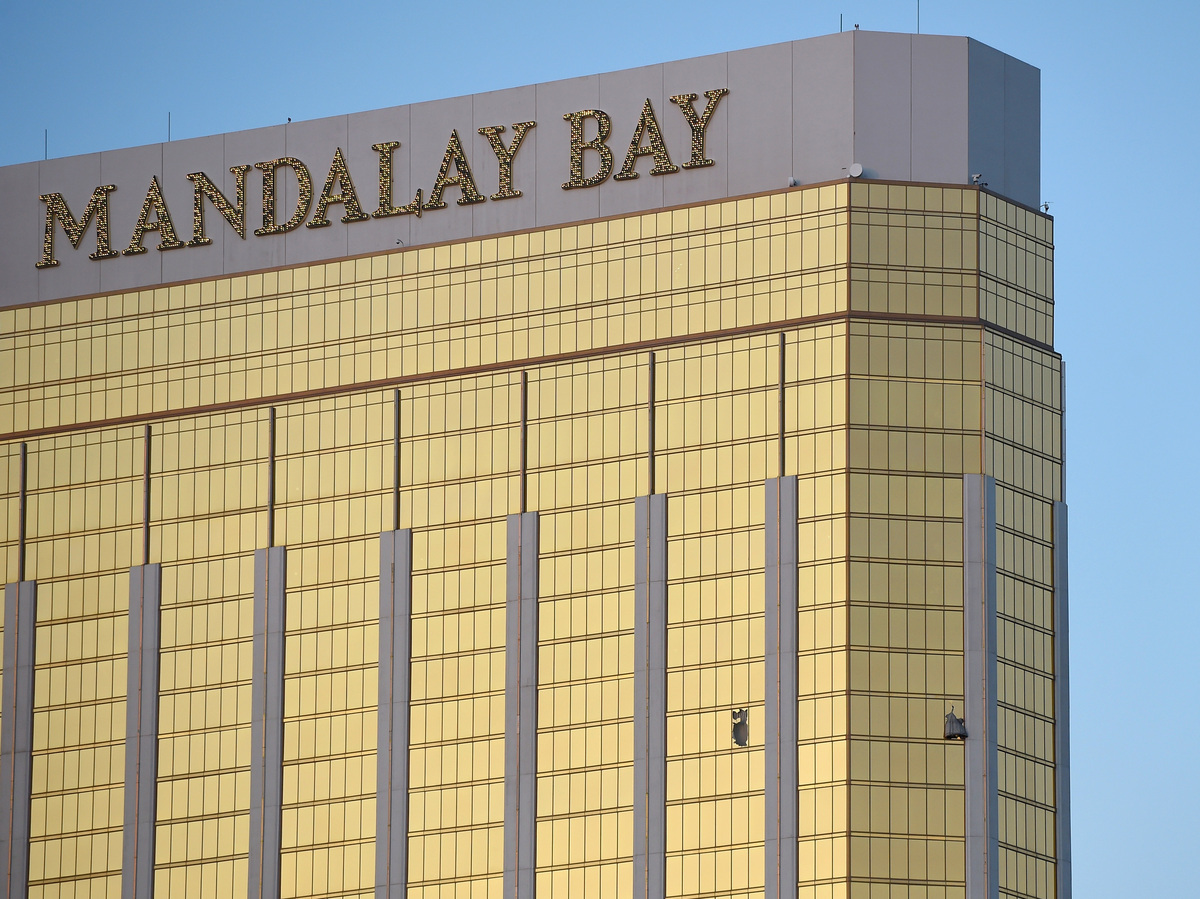 Jesus Campos, the hotel security guard who was shot the night that Stephen Paddock killed 58 people, gave his first media interview to Ellen DeGeneres. The shooter fired from windows he broke in a suite at the Mandalay Bay, pictured on Oct. 2, the day after the massacre.

Jesus Campos, the Mandalay Bay security guard who was the first victim the night that Stephen Paddock rained bullets on people in Las Vegas, gave his first — and possibly last — media interview, to Ellen DeGeneres on The Ellen DeGeneres Show.

While there were no major revelations in the interview, which airs Wednesday, Campos' account added fresh detail to a timeline of events that law enforcement officials are still working to understand.

With DeGeneres' gentle prodding, Campos told the story of the night of Oct. 1, when he was dispatched to the 32nd floor of the Mandalay Bay Resort and Casino to check on an alert that a stairwell door was open.

Campos took the stairs, but when he tried to open the door to the 32nd floor, it wouldn't open. He went downstairs and took the elevator up, where he saw that a metal bracket was holding shut one of two consecutive doors leading to the stairwell.

A hotel engineer named Stephen Schuck — who joined Campos on DeGeneres' couch — was sent to look at the bracket.

Then Campos said he heard what sounded like drilling, which DeGeneres clarified was the sound of gunfire. He assumed people were working in the area and turned to walk down the hall. Campos said that as he walked away, one of the two stairwell doors slammed behind him, likely catching the shooter's attention. (Police say Paddock had put surveillance cameras in his room and in a room service cart outside his suite.)

Las Vegas Sheriff: Police And Hotel Timelines Of Mass Shooting 'Not In Conflict'

Suddenly, Campos said, "I heard rapid fire. At first, I took cover. I felt a burning sensation." He realized he had been shot when he lifted his pant leg and saw blood. He got on his radio and told hotel staff that shots had been fired.

Paddock had shot him through the door of his suite. "I didn't know how he was shooting," Campos said.

That is when Schuck arrived from a higher floor to look at the metal bracket. Halfway down the hall, he saw Campos and heard loud noises.

"At the time, I thought it was a jackhammer," Shuck said, though he knew that didn't make sense.

Then Campos leaned out from an alcove to one of the hotel rooms and yelled at him, "Take cover! Take cover!" Schuck ducked.

"Within milliseconds, if he didn't say that, I would have got hit," Schuck told DeGeneres. He felt the pressure as bullets passed close behind his head.

A hotel guest stuck her head out of her room; Campos told her to go back in and take cover. "And that's when more rounds were dispersed," he said.

Lawmakers Say The ATF Should Regulate Bump Stocks. It's Not That Simple

And with that, Campos and Schuck finished their recounting of events — a key part of the investigation into exactly what happened that terrible night and why. Firing across Las Vegas Boulevard from his room on the 32nd floor of the Mandalay Bay, Paddock shot hundreds of bullets at people attending a country music festival before police say he turned the gun on himself. More than 500 people were injured and 58 were killed; about 45 people remain hospitalized.

The interview on Ellen doesn't alter the latest timeline described by Clark County Sheriff Joseph Lombardo, which has shifted in the weeks since the shooting. Authorities originally said that Campos arrived after Paddock had begun firing on the crowds below — and that his presence diverted the shooter's attention and ended the attack on the music festival.

Lombardo and MGM Resorts, which owns Mandalay Bay, now agree that Campos was shot at about the same time Paddock started firing at the music festival. It's not clear, with the latest timeline, what caused Paddock to stop firing.

The precise timing of events, especially how quickly the hotel communicated what it knew to police, could affect lawsuits filed by victims against MGM.

"I understand your reluctance, because you just want this to be over," she said. "So you're talking about it now, and then you're not going to talk about it again. And I don't blame you, because why relive this over and over again?" She thanked him for saving the lives of Schuck, the hotel guest and possibly others.

Then Campos expressed gratitude to all the people who assisted that night — the police, FBI, first responders, hospital staff and the community.

"Everything puts pieces together on how everyone came together to help that night, even in the darkest hour," he said.

Campos and Schuck refused to accept money from the show, but DeGeneres still bestowed the men with a few gifts. A staffer brought out a giant check for $25,000 in Campos' and Shuck's names to a fund for the victims of the attack.

Campos dabbed his eyes and took a deep breath.