Accessibility links
After Ikea Dresser Recall, Another Toddler Reportedly Died In Tip-Over : The Two-Way Last June Ikea recalled millions of dressers over the risk of tip-over accidents. But the parents of Jozef Dudek, who was crushed by a Malm dresser this May, were not aware of the recall, lawyers say. 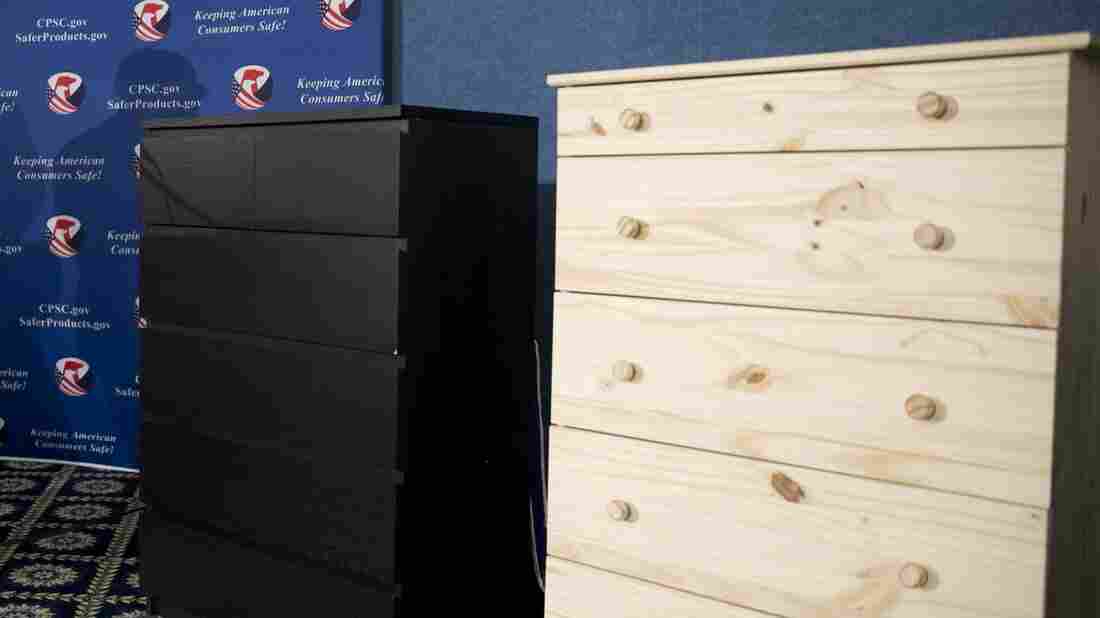 Two recalled Ikea dressers are displayed during a Consumer Product Safety Commission news conference in 2016. Since the recall was announced, at least one more toddler has been crushed to death by a falling dresser. Carolyn Kaster/AP hide caption 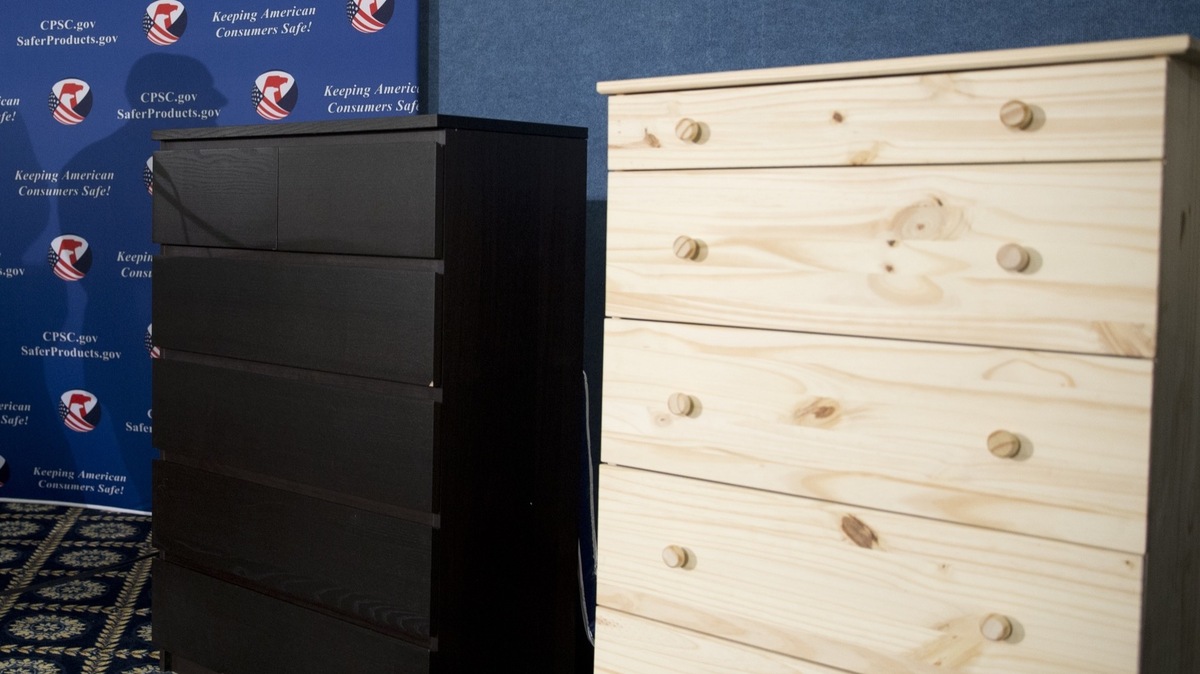 Two recalled Ikea dressers are displayed during a Consumer Product Safety Commission news conference in 2016. Since the recall was announced, at least one more toddler has been crushed to death by a falling dresser.

Another toddler has reportedly been crushed to death by an unsecured Ikea dresser, after the furniture giant recalled millions of chests and dressers over the risk of deadly tip-over accidents.

Jozef Dudek, 2, died in May, according to lawyers for his family, when he was crushed by an Ikea Malm dresser in his parents' room after he was put down for a nap.

In the recall, which began last June, Ikea offers full or partial refunds as well as providing free wall-anchoring kits to make the furniture safe to use. The move came after multiple toddlers were killed in similar tip-over accidents.

But Jozef's parents weren't aware that their Malm dresser had been recalled, Daniel Mann, who is representing the family, tells NPR.

In a statement, Ikea said it is aware of the accident and extends its "sincere condolences" to the family. The company says it went to "great lengths to get the word out" about the recall, including a national advertising campaign, millions of emails to consumers and information "posted prominently" in stores.

Last June, Ikea said that 29 million dressers in the U.S. were covered by the recall. The company has not identified how many dressers have since been returned or how many wall-mounting kits have been claimed.

The Philadelphia Inquirer, which has extensively investigated tip-over deaths, reports that in the first six months of the recall about 882,500 dressers were returned or "repaired" — representing 3 percent of the recalled items. More recent numbers are not available, the paper says.

Ikea challenges the accuracy of any percentages, saying that the affected dressers have been sold "going back decades," that "it's impossible to know how many of those units are still in use" and that some users might have attached the unit to the wall without participating in the recall.

As NPR previously reported, the recalled chests and dressers — as well as similar items of furniture — can be pulled over by a child, with potentially fatal consequences:

"When multiple drawers are opened, or if a child opens drawers and attempts to climb on them, even dressers that seem too heavy for a child to move can become vulnerable to tipping. (Seemingly stable televisions can pose a similar hazard.)

"In 2014, two children, both around 2 years old, died in tip-over accidents involving Ikea's Malm dressers. The next year, the company launched a program offering free wall-mounting kits to consumers and encouraging them to attach dressers to the wall.

"His family was renting its apartment, the Star Tribune reports, and was not allowed to put holes in the walls, as Ikea's wall-mounting kits require."

"IKEA urges all consumers to securely attach chests to the wall with the hardware included in every IKEA chest of drawers package," the company says in its newest statement. "Wall attachment is a necessary part of the assembly instructions, which must not be overlooked. If it is impossible for units to be attached to the wall, consumers should choose a different storage solution."

The Consumer Product Safety Commission says it is investigating the death of Jozef Dudek. He would be the eight toddler known to have died in an Ikea dresser tip-over, according to the CPSC and the Inquirer.

"We urge people who have IKEA dressers covered by the recall to take advantage of the remedies provided," the agency says.

Meanwhile, a group of consumer safety advocacy groups — including the American Academy of Pediatrics and the Consumer Federation of America — have issued a joint statement criticizing Ikea for promoting wall-mounting instead of urging owners to return their dressers.

"Unfortunately, the communication efforts focused on anchoring a deadly dresser to the wall are not enough on their own. Anchoring devices are meant as a second layer of protection for stable dressers — not as a replacement for making stable dressers in the first place," the groups write.

Safety standards for dressers are currently voluntary. Last year, some lawmakers introduced a bill to call for mandatory safety standards, which failed in committee.

A previous version of this story misspelled a reference to Jozef Dudek's first name as Josef.