Accessibility links
St. John Could Get Electricity Turned Back On, 6 Weeks After Hurricane Irma : The Two-Way "Portions of St. John are scheduled to be restored by the middle of next week," the power utility says. The U.S. Virgin Islands — home to more than 100,000 Americans — remains under boil-water orders. 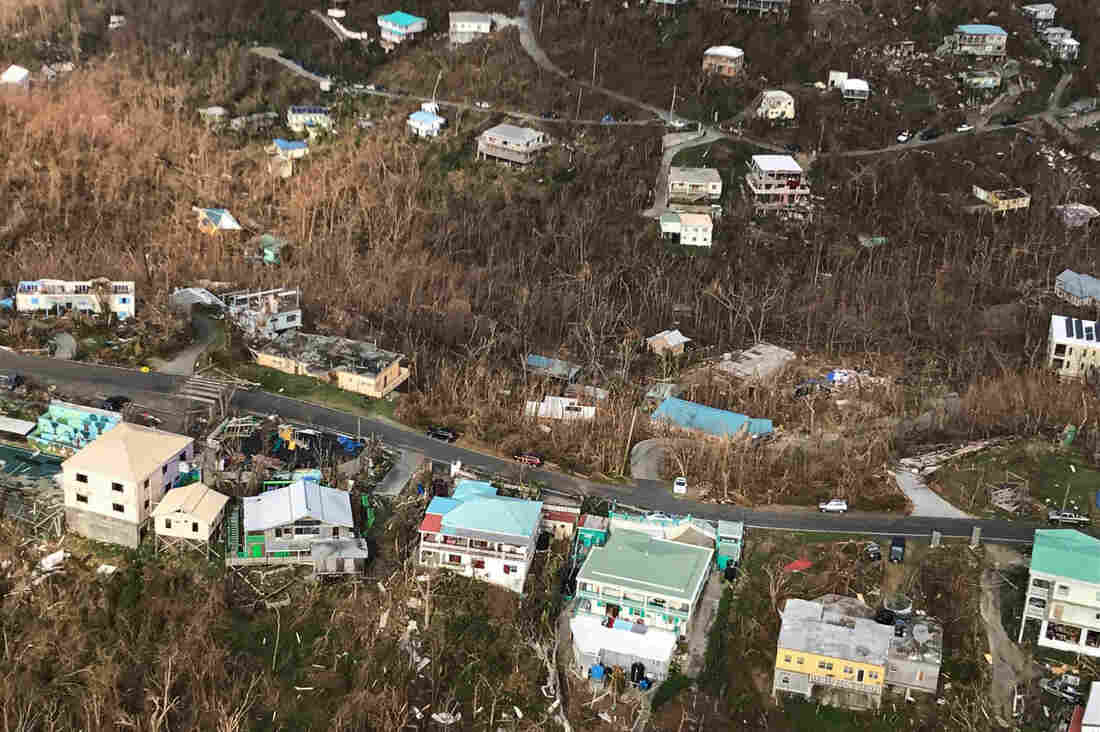 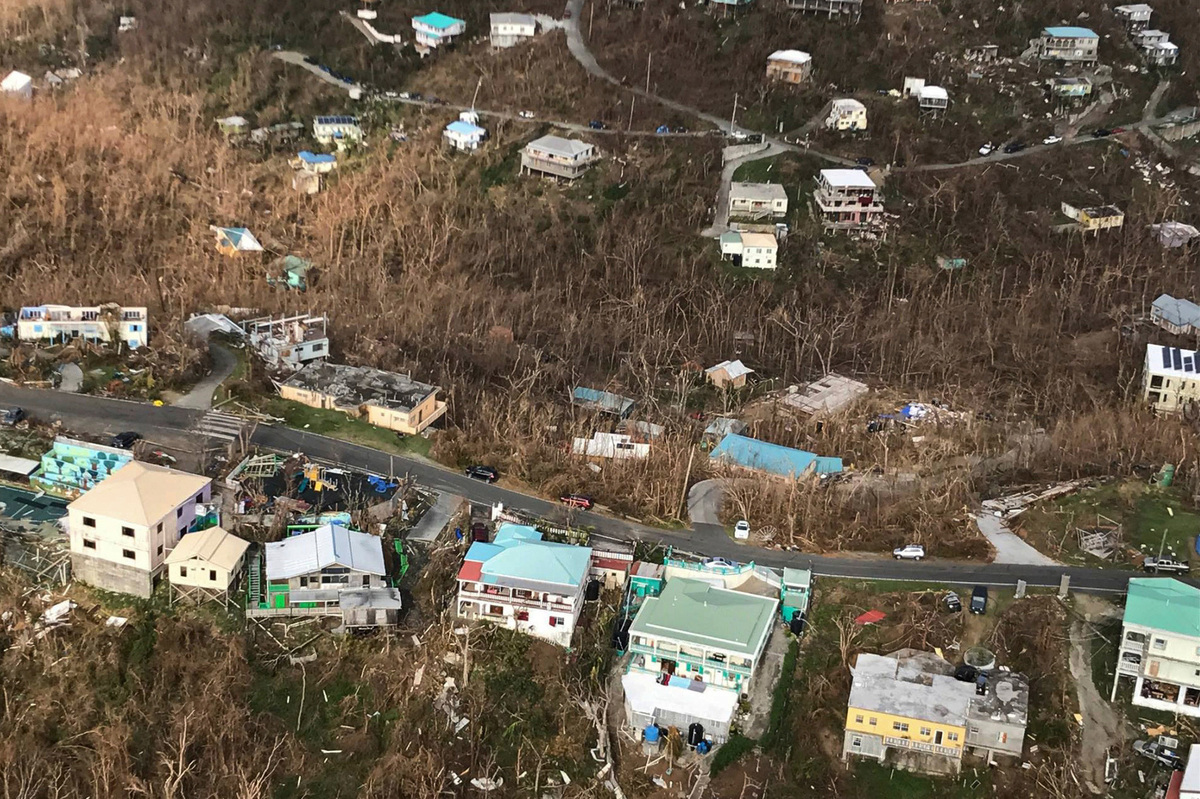 If all goes well, people on St. John in the U.S. Virgin Islands could have power restored next week for the first time since a pair of devastating Category 5 hurricanes struck in September, the local electric utility says.

"Portions of St. John are scheduled to be restored by the middle of next week," says Jean P. Greaux, Jr., communications director for Virgin Islands Water and Power Authority.

As they repair electrical transmission and distribution lines on St. Croix, St. Thomas and St. John, officials say they hope to restore power to 90 percent of the Virgin Islands territory by Christmas.

Six weeks since Hurricane Irma hit in early September and one month after Hurricane Maria hit on Sept. 20, here's a quick recap of where things stand in the U.S. Virgin Islands:

The Virgin Islands Water and Power Authority says it expects St. John "to receive an initial wave of service restoration by next week." The utility says it's also working to continue restoring electrical service to several areas across St. Thomas over the next week.

The Virgin Islands, After Irma: 'It Was Like Stepping Onto Another Planet'

For power to reach St. John, it has to come from the eastern portion of St. Thomas, where crews have spent weeks trying to rebuild a transmission feeder. That feeder, Greaux says, "should be energized within the next couple of days."

Visiting St. John this week, Gov. Kenneth Mapp told people there, "You're not being forgotten." His government added that Mapp is pushing to have Cruz Bay, on the western portion of the island, "energized next week."

Mapp also laid out requirements for homes to have power restored. Chief among them: an intact roof.

"WAPA cannot connect power to homes covered with tarpaulins or with other temporary fixtures," the government said in an update this week. "Likewise, homes with damaged or broken weatherheads will not be serviced."

As part of the work, divers were being deployed Friday to assess WAPA's undersea power cables to St. John, along with Hassel Island and Water Island, which lie just off St. Thomas.

"By Friday, Oct. 27, there will be more than 500 off-island linemen, engineers and other technical employees assisting with the restoration," Greaux says. "Currently, more than 100 linemen are working the St. Thomas-St. John district and another 100-plus in the St. Croix district. Their focus initially is on restoring and/or reconstructing primary circuits."

As part of its update, the U.S.V.I. government included a link to the official relief donation website.

Before And After: Satellite Images Show Irma's Caribbean Destruction

People who don't have bottled water should either boil water for at least one minute or disinfect their water using drops of bleach, the utility says.

Coastal water around the territory could also pose a risk — citing the V.I. natural resources agency, the government says, "There may be an elevated health risk to anyone swimming in storm water-impacted areas as a result of increased concentrations of bacteria."

WAPA says it has restored the water system in more than 90 percent of the territory. Giving an update on emergency water storage, the utility says it has four days' worth of water on St. John, nine on St. Thomas and three on St. Croix.

The deadly storms hit just as the school year was starting for many students in the Virgin Islands. More than 2,800 students have returned to school, according to the Federal Emergency Management Agency. The agency has put 25 generators in schools.

On Monday, all secondary education will resume on St. Croix, the territory's department of education says. But because of the number of school buildings that were ruined by the hurricanes, students will attend 4-hour split sessions each day, in which the schools that are still usable will host kids from either 7:30 a.m. to 11:30 a.m. or 12:30 p.m. to 4:30 p.m.

Bus service will also be limited, as only six buses survived the storms intact — prompting U.S.V.I. Education Commissioner Sharon Ann McCollum to tell parents and those in the community, "You're going to have to come together to form car pools to help get children to school."

On St. Croix, five elementary schools and three junior high schools have been declared unusable for the rest of the school year; on a brighter note, the district says the schools that open will be able to provide hot lunches to students.

Similar split schedules will take effect on St. Thomas, where the status of several elementary schools remains uncertain. The territory didn't provide any information about schools reopening on St. John.

The St. Croix District is planning to put on a relief concert for Sunday, Oct. 29, in which students in the concert band, steel ensemble and jazz ensemble will perform. In announcing rehearsal times, the district added, "Students are asked to bring water and a snack."

A public curfew has been in effect since the hurricane hit, but different areas were under varying orders. This week, the curfew was standardized to last from 8 p.m. to 5 a.m. each day, throughout the territory.

"Driving at night is extremely dangerous with traffic lights out," the U.S.V.I. government said. "In addition, downed powerlines and debris can remain on the roads since the storms."

On Thursday, FEMA said some 75,000 cubic yards of debris had been removed, and that some $11 million is detailed to help the cleanup effort.

The U.S. Army Corps of Engineers has installed nearly 900 "blue roofs" in the past month — but unlike the permanent structures that bear that name (which capture stormwater and help mitigate flooding), these are temporary rooftops. Made of "fiber-reinforced blue plastic sheeting," they're expected to protect a property for at least 30 days, until more permanent fixes can be made.

Hurricane shelters will finally begin to close in the same week schools start up, "to allow the Department of Education full use of their facilities," the government says.

Hospitals on St. Thomas and St. Croix were so badly damaged by the storms that they might need to be completely rebuilt. When Hurricane Irma hit St. Thomas, the catastrophe forced the rescue of dozens of patients from its lone hospital; they were taken to St. Croix and Puerto Rico.

But the threat wasn't over yet — more evacuations took place later.

"Evacuees from Puerto Rico and the U.S. Virgin Islands" with critical medical needs were airlifted to several mainland states by a special U.S. military task force in the storms' wake, as Fox News reported earlier this month.

In a recent letter to Congress, Mapp said it will cost $115 million to restore the territory's hospitals and healthcare system.

In all, Mapp wrote, it will take some $5.5 billion to fully recover from the storms — a figure that includes $1.36 billion in housing costs and $715 million for education needs.

According to a master list of resorts in the tourist-dependent Virgin Islands, many hotels in the territory are closed for the 2017-2018 season; others are either assessing damages or planning to reopen. And several are housing relief and repair workers.

The first cruise ships are slated to return to the territory on Nov. 10 — when a Royal Caribbean ship will stop at St. Thomas' port, the government announced earlier this week.

After extensive damage to the airports at St. Thomas and St. John, mobile air traffic control towers and landing systems were installed at both spots, the Federal Emergency Management Agency says.