Accessibility links
Japanese Elections Strengthen Abe, Reward His Gamble : The Two-Way A month ago, Japanese Prime Minister Shinzo Abe called a snap-election, despite his dismal approval ratings over the summer. Exit polls show his party taking a clear majority of seats in parliament. 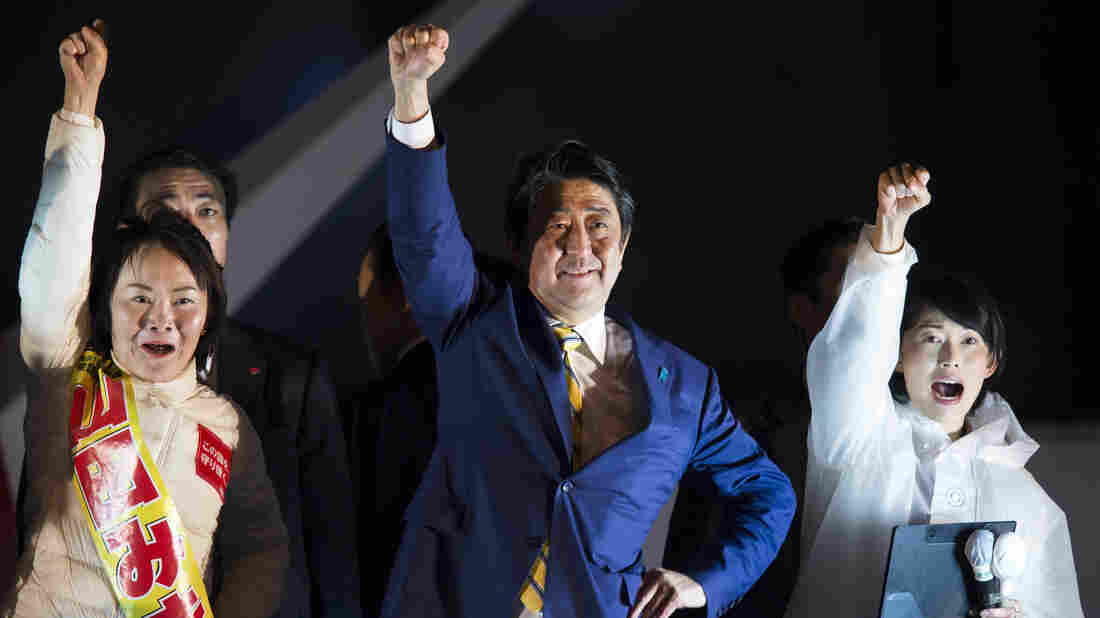 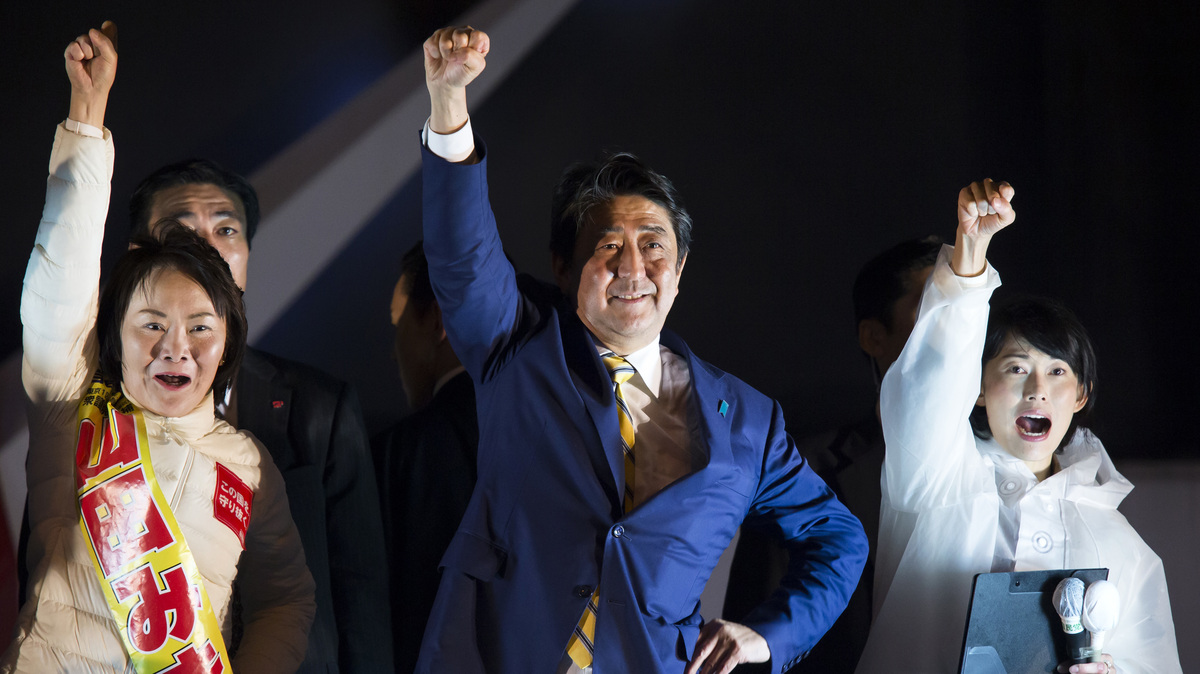 Shinzo Abe, Japan's prime minister and president of the Liberal Democratic Party (LDP), center, raises his arm during an election campaign rally in Tokyo, on Saturday. Exit polls show the LDP winning a majority of parliament seats in Sunday's election.

Prime Minister Shinzo Abe's Liberal Democratic Party has coasted to a clear majority in national elections, giving the Japanese leader a route toward his longtime goal of revising the country's postwar pacifist constitution.

Japanese media on Monday said Abe's Liberal Democratic Party had secured at least 312 seats in the country's 465-seat lower house — a two-thirds majority with a few seats to spare.

"I think the results reflected the voters' preference for a solid political foundation and their expectations for us to push policies forward and achieve results," Abe told the Japanese public broadcaster NHK as the results began to take shape on Sunday.

With Japan's economy slowly recovering from a prolonged rough patch, and North Korea continuing to instigate, Abe painted himself on the campaign trail as a voice of consistency in troubled times.

Prime Minister Shinzo Abe's slogan is "責任を果たす" — "I will fulfill my responsibilities." It may not be catchy but hey, it's somethin'

"(He) made the case that Japan is in the middle of a national security crisis so let's not leave it to any upstart opposition parties," said NPR's Elise Hu on Sunday's Weekend Edition. "He seems to have won that argument."

The elections were a result of a risky move on Abe's part. He dissolved the lower house of parliament last month and called for fresh elections a year earlier than scheduled to "face a national crisis" in North Korea.

It was a gamble, considering Abe's approval ratings over the past year have ranged from iffy to dismal. One Washington Post headline from the summer read "Japanese prime minister's poll numbers are so low they make Trump's look good."

"Abe is personally not that popular of a guy," Hu said. "But after North Korean missiles flew over Japan two times this year, Abe's popularity shot back up."

The election will reinforce the LDP's strength in parliament. Another election is on the horizon next September too, where Abe is expected to run again to stay on as the party's leader.

A victory then would extend his premiership to 2021, make him the longest-tenured leader in post-war Japan, and make his goal of amending the country's constitution by 2020 a real possibility.

The now-constant threat of North Korea has shone a light on a clause in the Japanese constitution, known as Article 9, that calls for the complete renunciation of war.

Opinion polls have shown the Japanese public split on whether the clause should be revised.

After Sunday's vote, Abe was quoted by Japanese media as saying that "my imminent task is to firmly deal with North Korea."

The election also happened with a natural disaster looming. Voters went to the polls, despite much of the southern and central parts of the country being on high alert with a typhoon bearing down.

Typhoon Lan's outer bands have already killed two people, according to Reuters, with the storm set to make landfall on Japan's main island of Honshu on Monday morning.

More than 70,000 households across Japan were advised to evacuate, with more than 5,000 ordered to do, Reuters reported. The southern and central parts of the country are on highest alert.