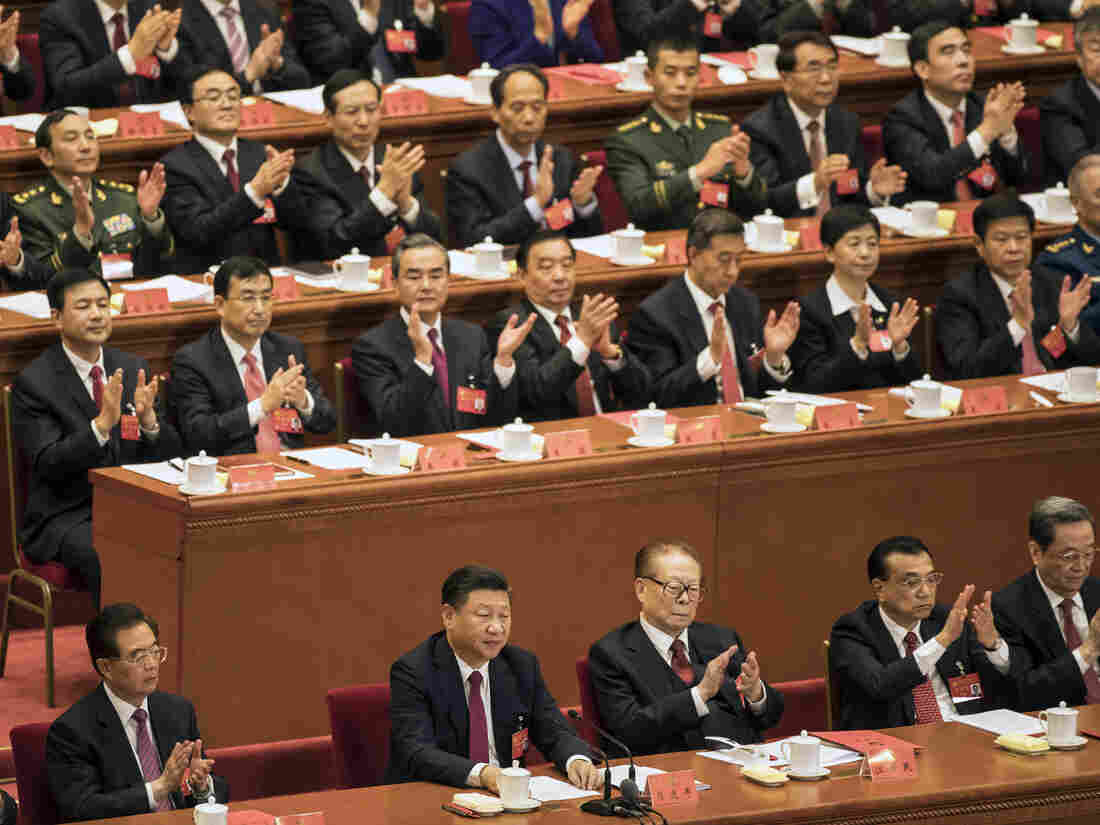 Applause rained down for China's President Xi Jinping on Tuesday, as the Communist Party of China adopted his "thought." Xi (bottom center) was flanked by former presidents (from left) Hu Jintao and Jiang Zemin, along with Premier Li Keqiang. Qilai Shen/Bloomberg via Getty Images hide caption 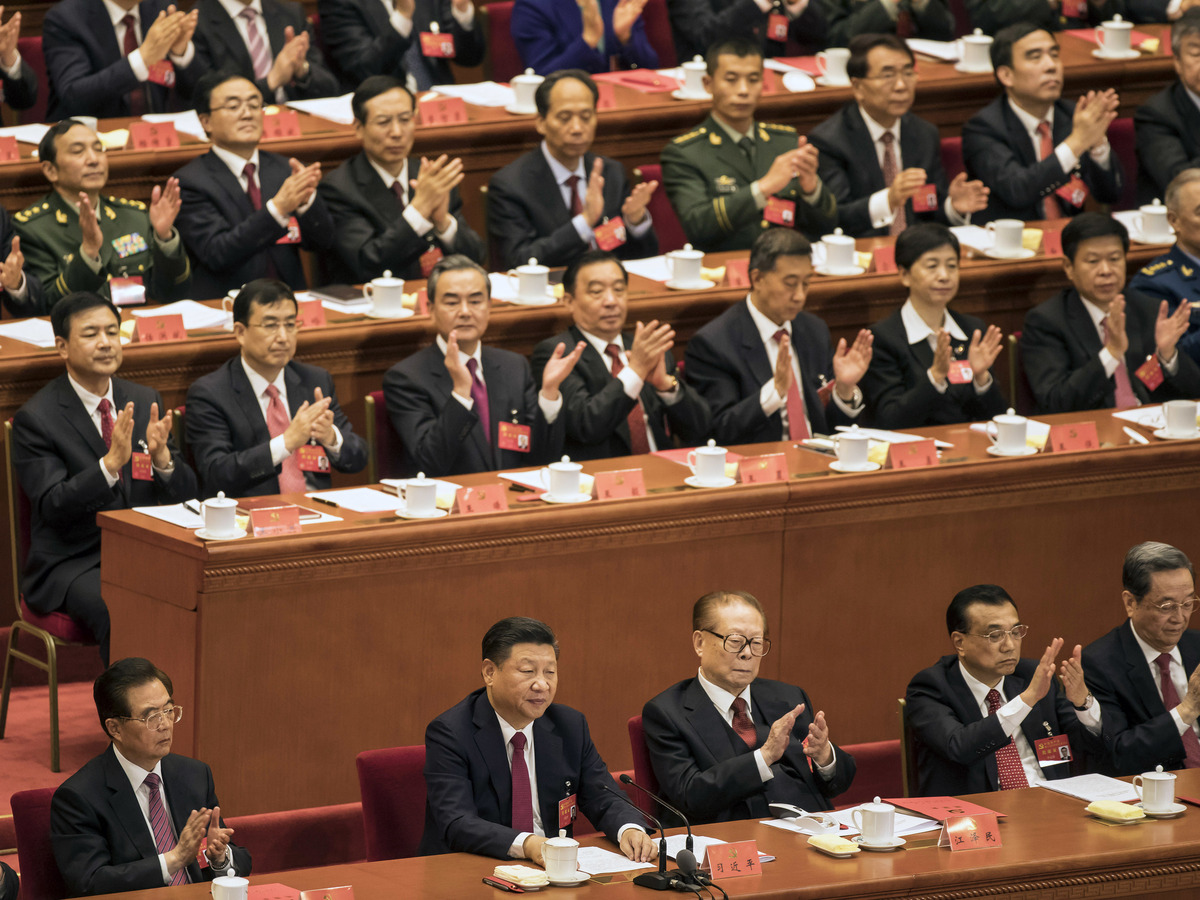 Applause rained down for China's President Xi Jinping on Tuesday, as the Communist Party of China adopted his "thought." Xi (bottom center) was flanked by former presidents (from left) Hu Jintao and Jiang Zemin, along with Premier Li Keqiang.

Using language not heard since the Mao Zedong era, the Communist Party of China has adopted Xi Jinping's ideas for Chinese socialism, embracing its president anew and adding his "thoughts" to the party constitution.

The party added a section with the formal title "Xi Jinping Thought on Socialism with Chinese Characteristics for a New Era" on Tuesday, as it winds down the congress it holds every five years.

The amendment "juxtaposes Xi's thought with Marxism-Leninism, Mao Zedong Thought, Deng Xiaoping Theory, the Theory of Three Represents, and the Scientific Outlook on Development," Chinese state Xinhua media reports. Of those other theories, we'll note, only one shares the word "thought" with Xi: Mao Zedong Thought, known to many outside of China as simply "Maoism."

"The congress approved writing Xi Jinping's theories into the party's charter, which was largely expected. At the congress, Xi declared a new era for Chinese-style socialism, in which the communist party is in charge of everything.

"Our party's leadership and our nation's socialist system are strong, solid and vigorous," Xi proclaimed to the congress's delegates.

"Tomorrow, the party will unveil a new leadership lineup. Xi is all but assured of getting a second, five-year term as the party's general secretary."

If he returns as expected, Xi, 64, would turn 68 while in office — putting him outside of China's norm of not allowing leaders who are older than 67 to hold power. Many have been watching to see how Xi handles the age convention as it applies not only to himself but to his allies and aides. Under the age norm, several members of China's Politburo Standing Committee are due to retire before the new lineup is formed that will lead the party — and country — for the next five years.

The big event brought an expansive treatment by Xinhua, which cast Xi's enshrinement in party doctrine against a broad historical backdrop.

From the Chinese outlet:

"Experts widely believe the development of socialism in China shows theoretical innovations by the Chinese leadership will not only help the country avoid history's cycle of rising and falling and the 'Tacitus Trap,' but offer an alternative answer to such predictions as the 'end of history,' by Francis Fukuyama, who argued for the inevitable triumph of Western liberal democracy."

The "Tacitus Trap" has been a recurrent theme in China in recent years, often mentioned in conversations about maintaining the government's credibility — particularly in the digital age. On the Web, all of the top Google results for the term refer to its use in China.

Tacitus was invoked on a wide scale as far back as 2012, when China Daily reported, "'Tacitus Trap' warns any leaders in power that when a government loses credibility, whether it tells the truth or a lie, to do good or bad, will be considered a lie, or to do bad."

In that piece, China Daily cited "Publius Gornelius Tacitus" — a typo that has lived on in China, as British ancient history professor Neville Morley notes. Writing about the phenomenon, Morley adds, "And of course no one has ever heard of the Tacitus Trap."

Morley has added several updates to his original post about the term, which has opened discussions about its authenticity and validity.

But the professor concludes, "Long live the Tacitus Trap!" — and here's why:

"Meaning is realized at the point of reception; if this reading of Tacitus offers a useful means of interpreting Chinese political dilemmas, what does it matter that the West has failed to recognize the usefulness of the principle (or has forgotten it, if indeed the original source for this is Bacon or other early modern readers of Tacitus)? The idea of different cultural traditions of reading the classics, with complex interactions and debates, is so much more exciting than the idea of a single worldwide tradition or set of conventions."