Accessibility links
Here's What's In That $300 Million Whitefish Contract : The Two-Way The contract with Puerto Rico's power authority says it was approved by FEMA. But FEMA says it did not approve the contract and has not paid any money on it yet. 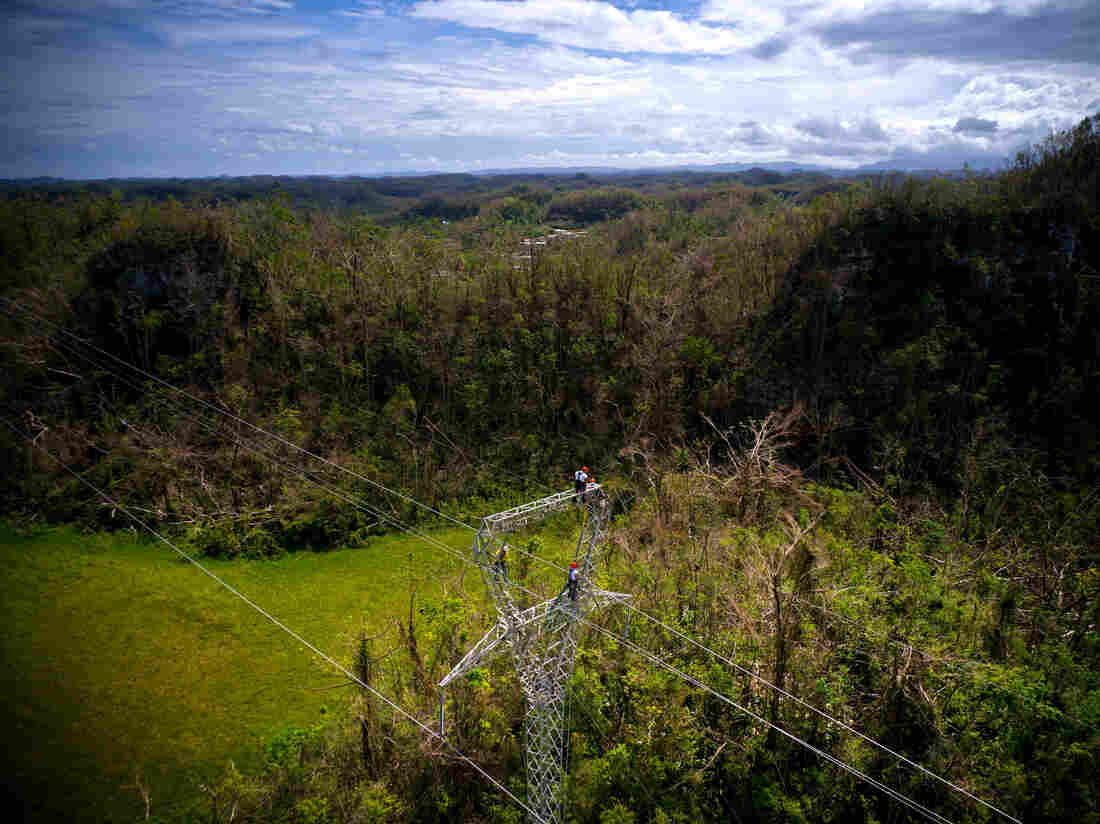 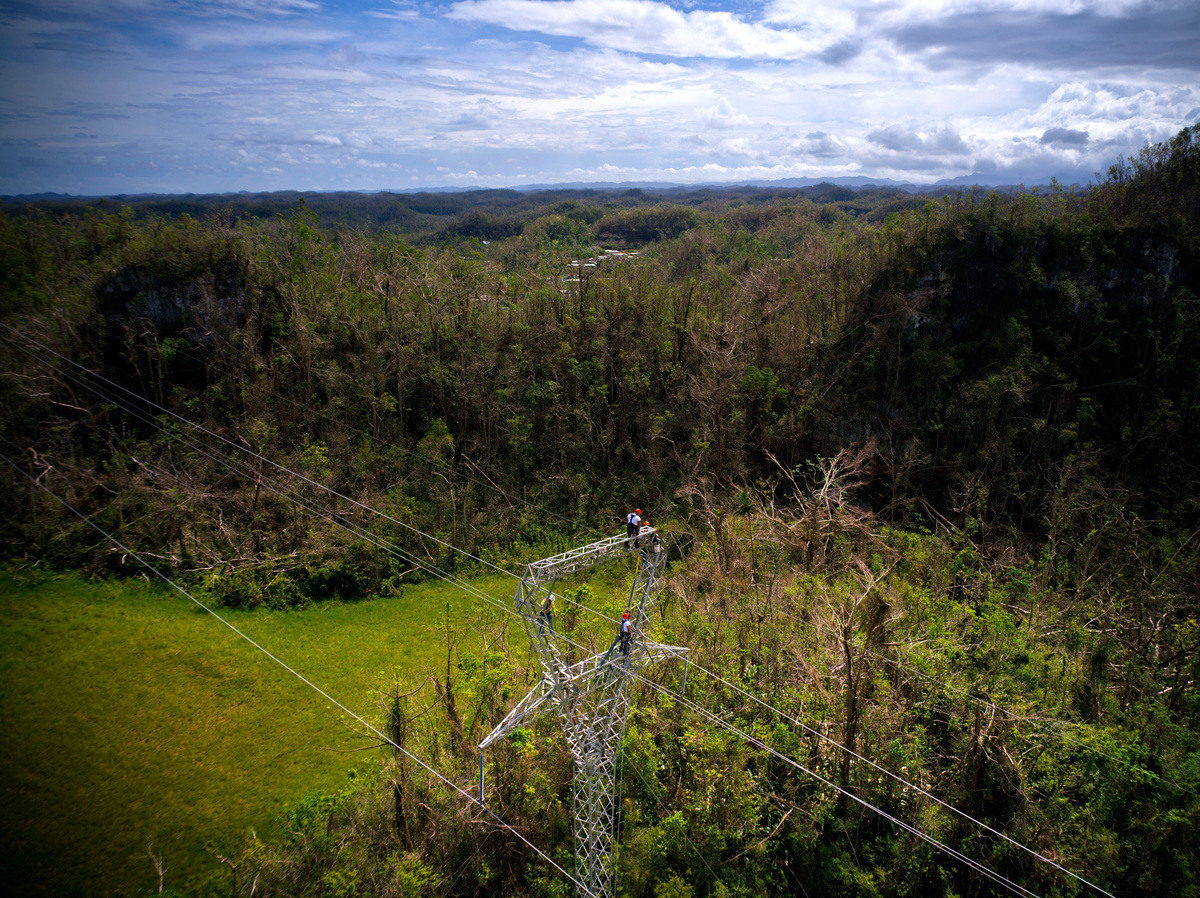 Last week, a tiny company in Montana called Whitefish Energy Holdings announced that it had been given a $300 million contract with Puerto Rico Electric Power Authority to help restore electricity on the island, which was severely damaged last month by Hurricane Maria. As we reported, that deal was met with surprise and suspicion from many: The project is enormous, and Whitefish is a two-year-old firm that until recently had just two full-time employees.

The full text of the Whitefish contract is now publicly available, so all of its terms can finally be assessed. Reporter Yanira Hernández Cabiya at Caribbean Business obtained the contract and published it online.

Much of the controversy that has surrounded the contract has focused on the high rates Whitefish is charging for labor. The contract shows those labor rates are pricey indeed: $240 an hour for a general foreman and $227 for a lineman. The per diems are also expensive: almost $80 a day for meals, and $332 a day for lodging. Employee flights are billed at $1,000 each way.

For subcontractors, the bulk of Whitefish's workforce, the prices go even higher. A general foreman costs $336 an hour and a lineman, $319.

Usually after huge power outages, electric companies arrange mutual aid agreements with utilities elsewhere to bring in workers to help restore power. But that would most likely have required assurances of payment, and PREPA has been bankrupt since July. So PREPA CEO Ricardo Ramos made a deal with Whitefish, which asked for no such guarantee.

Whitefish then subcontracted with utilities including Jacksonville Electric Authority and Kissimmee Utility Authority to help it with transmission system restoration — the same thing a mutual aid agreement might have arranged at a lower cost. It's unusual for electrical utilities to work under a contractor.

Puerto Rican Gov. Ricardo Rosselló has ordered an audit of the contract. And yesterday, the chairmen of the House Committee on Natural Resources and its Subcommittee on Oversight and Investigations instructed Ramos to retain all records related to the Whitefish deal and provide them to Congress.

The contract permits audits, except regarding "the cost and profit elements" of its labor rates — likely a core interest of any auditor.

While PREPA probably has no recourse to demand lower labor rates, the contract states that the power authority can terminate the contract at any time, "for any or no reason, when in PREPA's judgment such action responds to its best interest."

If PREPA were to terminate the contract, Whitefish would be compensated for "actual, reasonable, and necessary expenses, including reasonable demobilization costs." PREPA would retain all documents, data, surveys, maps and property prepared by Whitefish.

But one mystery deepens upon reading the contract: Did FEMA sign off on this?

The contract says that the agency did: "By executing this contract, PREPA hereby represents and warrants that FEMA has reviewed and approved of this Contract, and confirmed that this Contract is in an acceptable form to qualify for funding from FEMA or other U.S. Governmental agencies."

But on Friday morning, FEMA disputed that. "Any language in any contract between PREPA and Whitefish that states FEMA approved that contract is inaccurate," the agency said in a statement.

On Monday, FEMA announced it would give $215 million to PREPA for power restoration, as part of more than $500 million in disaster assistance for the island. But FEMA says it has not paid any reimbursement for the Whitefish contract.

"Based on initial review and information from PREPA, FEMA has significant concerns with how PREPA procured this contract and has not confirmed whether the contract prices are reasonable," the agency said, adding that applicants for FEMA Public Assistance (such as Puerto Rico) that don't follow its procurement guidelines risk not being reimbursed for their disaster costs.

On that note, one provision of the contract could be costly for PREPA.

Article 29 of the contract states: "Any failure to secure approvals or funding from FEMA or some other source (except due to the Contractor's sole fault) shall not relieve PREPA from its obligations for payment under this Contract."

Whitefish defended its work and says it now has 325 workers on the ground in the commonwealth.

"The contract was done in good faith with PREPA," Whitefish spokesman Ken Luce told MSNBC, The Associated Press reports. "There's nothing there."

Ramos, the head of PREPA, told The Washington Post that he was "very comfortable with any investigation" by Congress and that he was happy with Whitefish's work so far.

Rosselló has said he expected to release the initial findings of his office's audit on Friday.

"If there is no wrongdoing, if it has been done correctly, then we will push forward," Rosselló said at a news conference Thursday, according to NBC News. "If there is wrongdoing, in this process or in any process, there will be hell to pay."

Other highlights from the Whitefish contract: