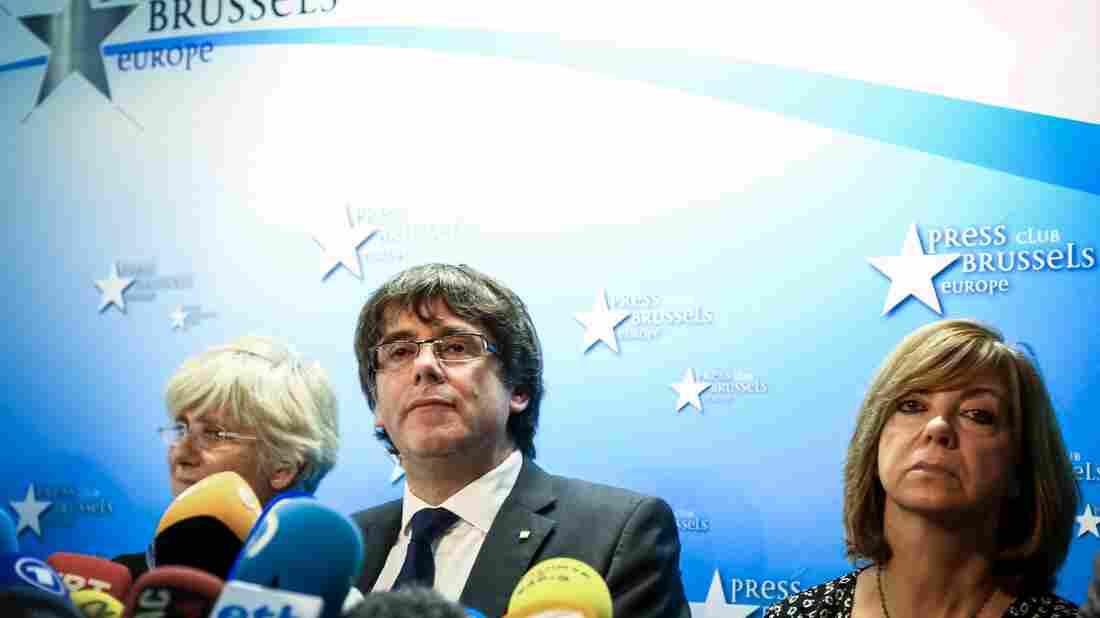 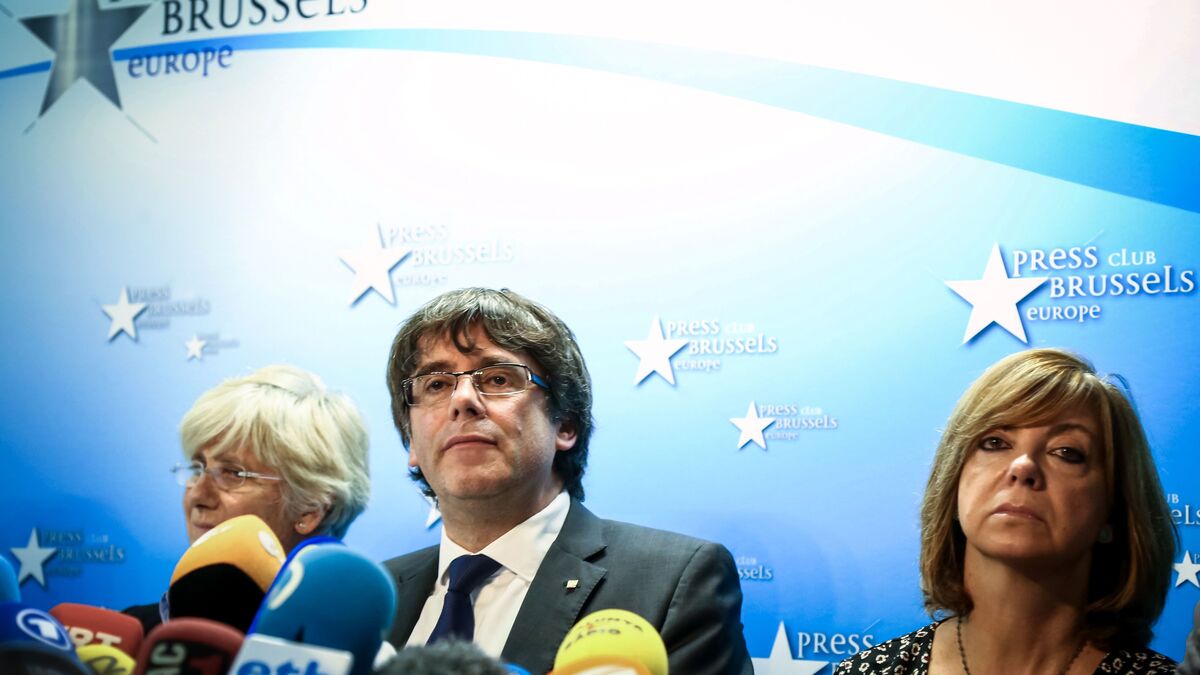 Catalonia's deposed leader, Carles Puigdemont (center), speaks at a news conference in Brussels on Tuesday with other members of his dismissed government.

Ousted Catalan leader Carles Puigdemont says he and several of his fellow politicians might have fled Spain for Belgium, but they have no intention of seeking political asylum there.

Rather, he told a news conference in Brussels on Tuesday, they had "decided to err on the side of caution" by leaving the tumult in Catalonia. The statement comes after the region formally declared independence Friday, then saw Spain retaliate by taking over direct rule and announcing sedition charges against Catalan leaders.

"I did this to avoid the threats that I was receiving," Puigdemont told reporters through an interpreter. "The five ministers I'm with have no protection. We also wanted to avoid any confrontation that may possibly have occurred had we stayed in Barcelona."

Just hours after the news conference, a Spanish judge ordered the separatist leader and members of his deposed administration to testify before the court. They have been called to appear Thursday to speak on the charges lodged against them by Spain's attorney general, which include rebellion and embezzlement and carry a possible sentence of 30 years in prison.

As of this writing, the Catalan politicians have not publicly responded to the summons. But before it was issued, Puigdemont had told reporters that "you have to abide by the law — and we won't shy away from our responsibilities." But he added that "we do need guarantees" in order to return to Spain.

The volley of statements Tuesday follows a day filled with confusion in Catalonia. As some Catalan officials defied Madrid's order dissolving the regional government by going to work, and later were summarily removed — a photo was posted on Puigdemont's Instagram, apparently taken from his office. Later in the day, it was revealed he and several other Catalan politicians had fled Spain for Belgium.

As NPR's Lauren Frayer notes, that move did not sit particularly well with Spanish officials — or with some Catalan independence activists, either. In Lauren's words, a Catalan schoolteacher named Laia Llobet told her that Puigdemont "just up and left at the most important moment":

"She wants Puigdemont to come back and run in elections set for Dec. 21. Two civic leaders of the Catalan independence movement have already been arrested and charged with sedition — Llobet says it's unfair for Puigdemont to leave them behind languishing in jail."

Puigdemont asserted they fled not to pursue Belgian protection, but rather to "act with freedom and security." Referring to the independence referendum on Oct. 1, when clashes broke out between Spanish police and Catalans attempting to go to the polls, Puigdemont said he had seen "what the reaction of the federal government was and how violent they were with our people."

But he also added that he would accept the results of those Dec. 21 elections called by the central Spanish government, under one important condition:

"I want a clear commitment from the state. Will the state respect the results that could give separatist forces a majority?"