Accessibility links
At Least 8 People Killed In Motorist's 'Act Of Terror' On Manhattan Bike Path : The Two-Way "The vehicle struck multiple people on the path," police said Tuesday. Authorities say the suspect was shot and taken into custody after leaving the vehicle and "displaying imitation firearms." 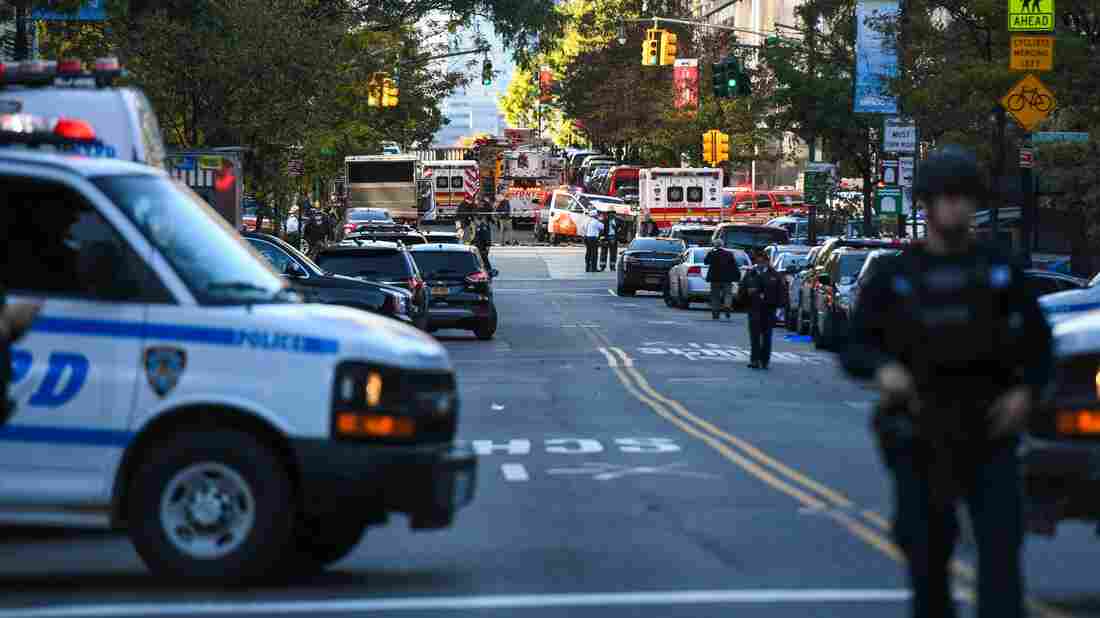 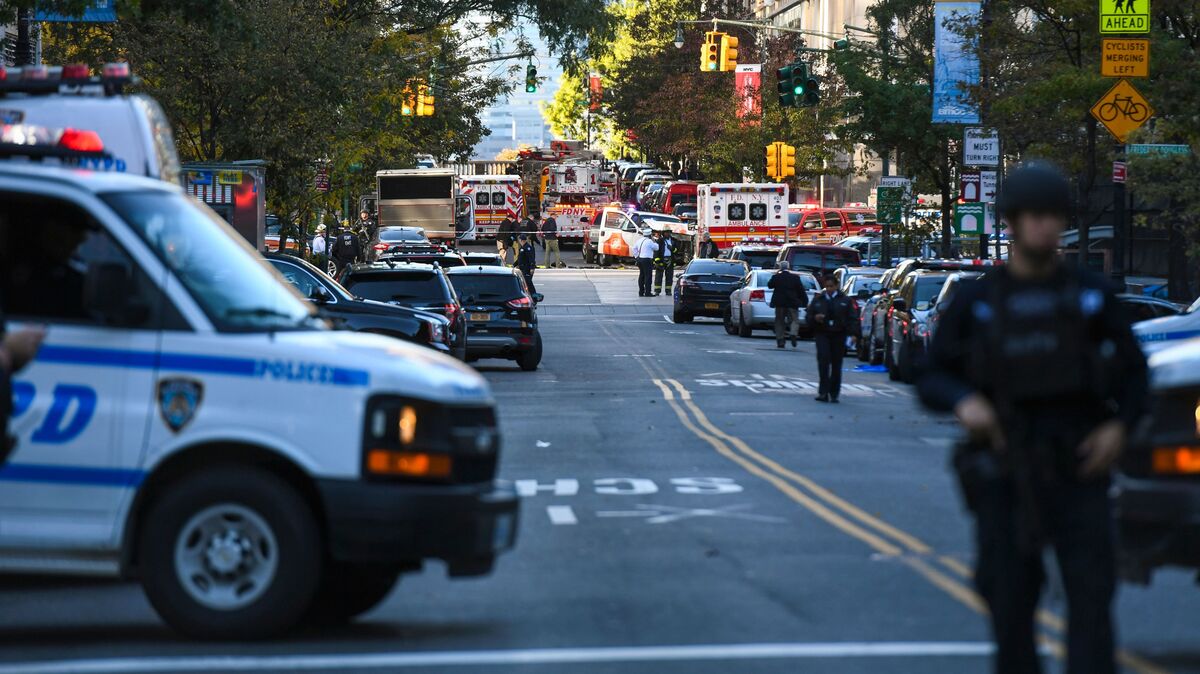 Police secure the area in Lower Manhattan near where a vehicle drove onto a bicycle path Tuesday afternoon, killing "several people," according to New York City police.

At least eight people were killed and "more than a dozen" were injured Tuesday afternoon after a motorist drove onto a busy pedestrian and bicycle path in Manhattan. Police have arrested a 29-year-old man identified by law enforcement officials as Sayfullo Saipov. Authorities have said there are "no others outstanding" in the incident, which unfolded near the World Trade Center.

The law enforcement officials say the suspect came to the U.S. from Uzbekistan. According to public records he has lived in Florida, Ohio and recently New Jersey.

"Based on the information that we have at this moment this was an act of terror, a particularly cowardly act of terror," New York City Mayor Bill de Blasio said at a news conference after visiting the scene.

"The vehicle struck multiple people on the path. There are several fatalities and numerous people injured," the New York Police Department said in a series of tweets describing the act.

"The vehicle continued south striking another vehicle. The suspect exited the vehicle displaying imitation firearms" and was shot in the stomach by police. Officials later said a paintball gun and a pellet gun were recovered at the scene.

The vehicle continued south striking another vehicle. The suspect exited the vehicle displaying imitation firearms & was shot by NYPD

The NYPD also tweeted a request for the public to provide any videos or other images of the event for use by investigators.

At the moment, there is "no evidence to suggest a wider plot, a wider scheme," Gov. Andrew Cuomo said at the news conference. He urged the city's residents not to change their plans: "Be New Yorkers and live your life."

Police Commissioner James O'Neill described the vehicle as a rented Home Depot pickup truck and said that after striking people on the bike path, it collided with a school bus, injuring two adults and two children.

The government of Argentina identified five of the people killed as Argentine citizens. A statement posted Tuesday on the website of the Argentine Foreign Ministry expressed the government's condolences for the deaths of the five and gave their names as Hernan Diego Mendoza, Diego Enrique Angelini, Alejandro Damian Pagnucco, Ariel Erlij and Hernan Ferruchi.

The statement said a sixth Argentine suffered injuries that are not life-threatening. It said the men were from the Argentine city of Rosario and had been part of a group of friends celebrating the 30th anniversary of their graduation from that city's Escuela Politecnica.

One witness described the scene for member station WNYC.

"Tom Gay, a school photographer, was on Warren Street and heard people saying there was an accident. He went down to West Street and a woman came around the corner shouting, 'He has a gun! He has a gun!'

"Gay said he stuck his head around the corner and saw a slender man in a blue track suit running southbound on West Street holding a gun. He said there was a heavyset man pursuing him.

"He said he heard five or six shots and the man in the tracksuit fell to the ground, gun still raised in the air. He said a man came over and kicked the gun out of his hand."

"Our thoughts and prayers are with all those affected," said White House press secretary Sarah Huckabee Sanders, who added that chief of staff John Kelly has briefed President Trump on the situation.