Accessibility links
New York City Terrorist Attack: Suspect In Truck Attack Was Former Uber Driver : The Two-Way Prosecutors say Sayfullo Saipov left a note declaring he drove onto a bike path in Manhattan in the name of ISIS. Eight people were killed. Saipov was shot by a police officer and is recovering. 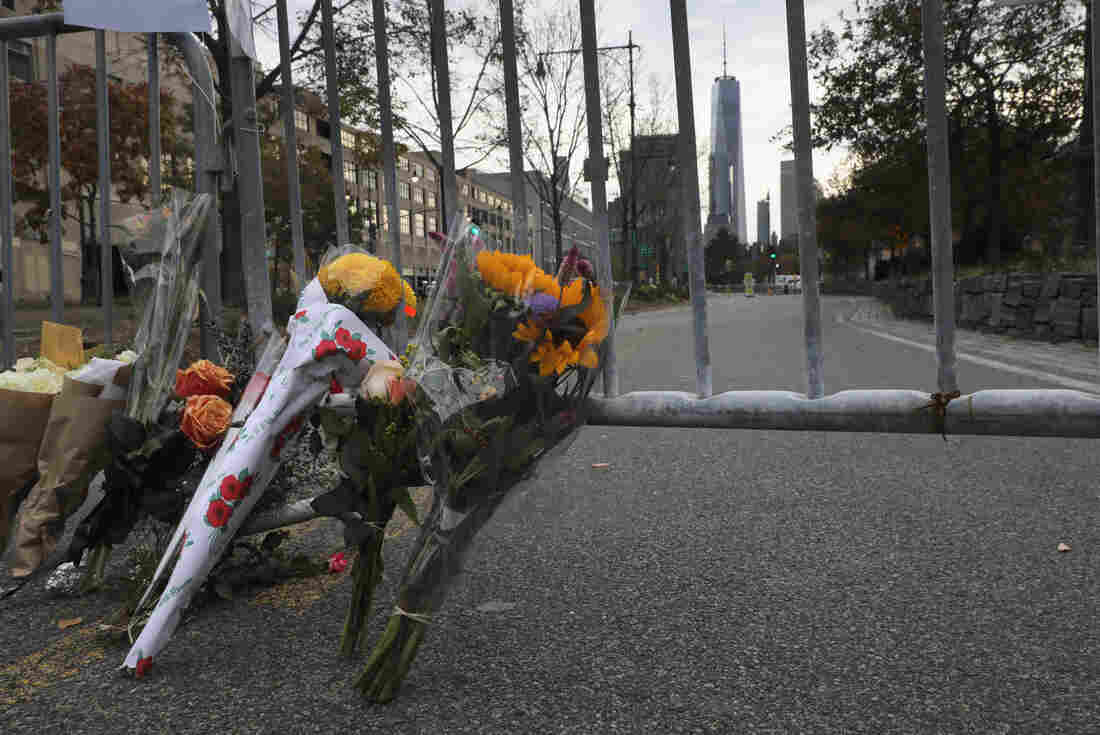 A makeshift memorial stands on a bike path in Lower Manhattan on Wednesday. Eight people on the path were killed in a truck attack Tuesday. John Moore/Getty Images hide caption 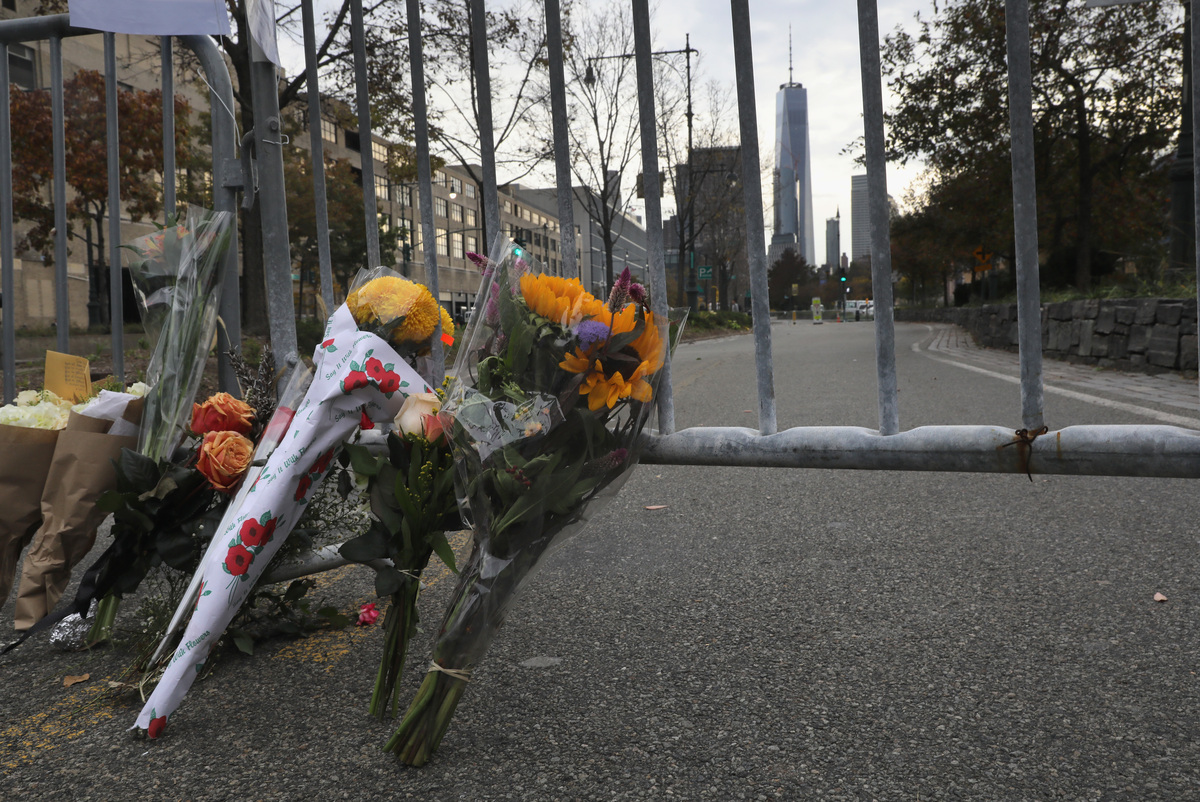 A makeshift memorial stands on a bike path in Lower Manhattan on Wednesday. Eight people on the path were killed in a truck attack Tuesday.

A criminal complaint filed by federal prosecutors accuses Sayfullo Saipov of carrying out the truck attack in Lower Manhattan that killed at least eight people and injured a dozen more on Tuesday.

Saipov, a 29-year-old native of Uzbekistan who is a legal resident of the U.S., is charged in the document with providing material support to a foreign terrorist organization. Prosecutors say he waived his Miranda rights and confessed during a hospital interview to having carried out the attack after being inspired by ISIS videos he watched on his cellphone.

Saipov made a court appearance shackled and in a wheelchair. He didn't ask to be released on bail.

A second count charges him with violence and destruction of a truck that was used in interstate and foreign commerce. The document says he had rented a truck in Passaic, N.J., about an hour before driving it onto a walkway in New York City "with reckless disregard for human life." It shows a still photo of Saipov the afternoon of Oct. 31 at the truck rental agency.

He faces up to life in prison if convicted of the charges. According to FBI Agent and Joint Terrorism Task Force member Amber Tyree, Saipov requested while being interrogated to display the black flag of ISIS in his room at Bellevue Hospital, where he is recovering from being shot in the abdomen by a police officer as he fled his crashed rental truck. The FBI agent added that the suspect "stated that he felt good about what he had done."

The document says a court-ordered search of two cellphones found in the truck he rented revealed 90 videos and 3,800 photos of ISIS-related propaganda. Saipov, it says, had wanted to display ISIS flags on the front and back of the vehicle but decided against doing so to avoid drawing attention to himself.

The suspect, according to the complaint, began planning the attack about a year ago in response to a video in which ISIS leader Abu Bakr al-Baghdadi asked what Muslims in the U.S. were doing in response to the killing of Muslims in Iraq. Saipov, after renting a truck nine days earlier to practice making turns, is said to have chosen to carry out the attack on Oct. 31 because there would be more people on the streets owing to the Halloween holiday. The complaint asserts his aim was "to kill as many people as he could."

Investigators announced Wednesday that they were searching for a second man, but FBI Assistant Director William Sweeney said later that they had found him. He gave no further details.

New York Gov. Andrew Cuomo described the attack as a "classic case of a radicalization of a domestic jihadist who associated with ISIS," telling CBS on Wednesday that "the best evidence we have is that he was a lone wolf."

Police are asking anyone with videos or photos of the attack, which they are identifying as a terrorist act, to share them with the FBI.

In the attack, a truck struck pedestrians and bicyclists on a riverfront bike path, then crashed into a school bus. Eleven people were wounded, including students on the bus. Eight people died, among them two Americans, according to police: New York City native Nicholas Cleves and Darren Drake, who had been in town from New Milford, N.J.

After crashing his truck, the driver emerged, holding a paintball gun and a pellet gun and shouting "Allahu akbar," Arabic for "God is great," according to Acting U.S. Attorney General Joon Kim. The suspect was then shot by the officer, placed in custody and taken for treatment.

Authorities say Ann-Laure Decadt, a Belgian tourist, was also killed in the attack. 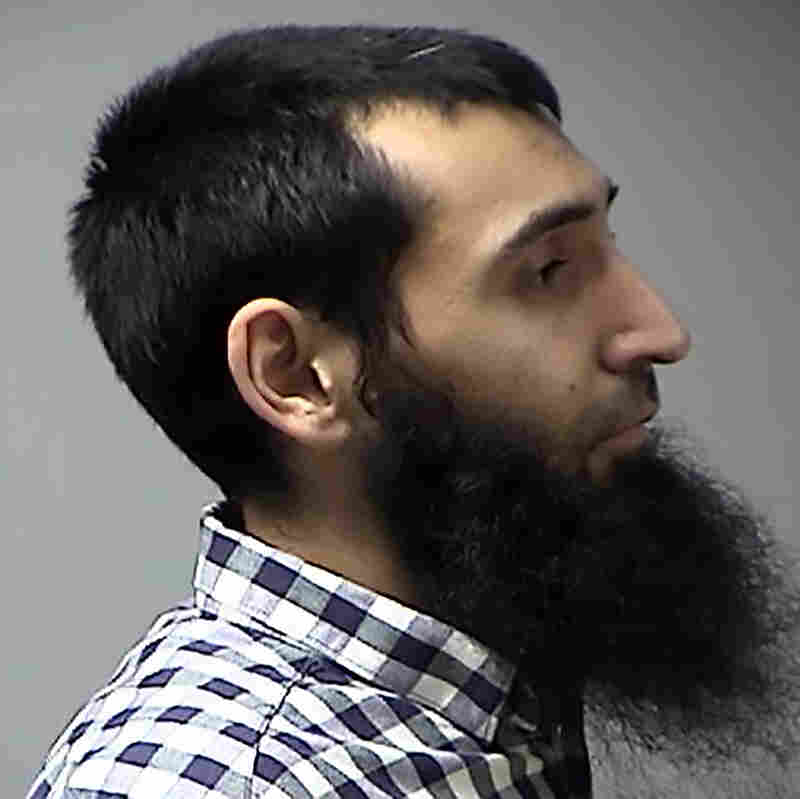 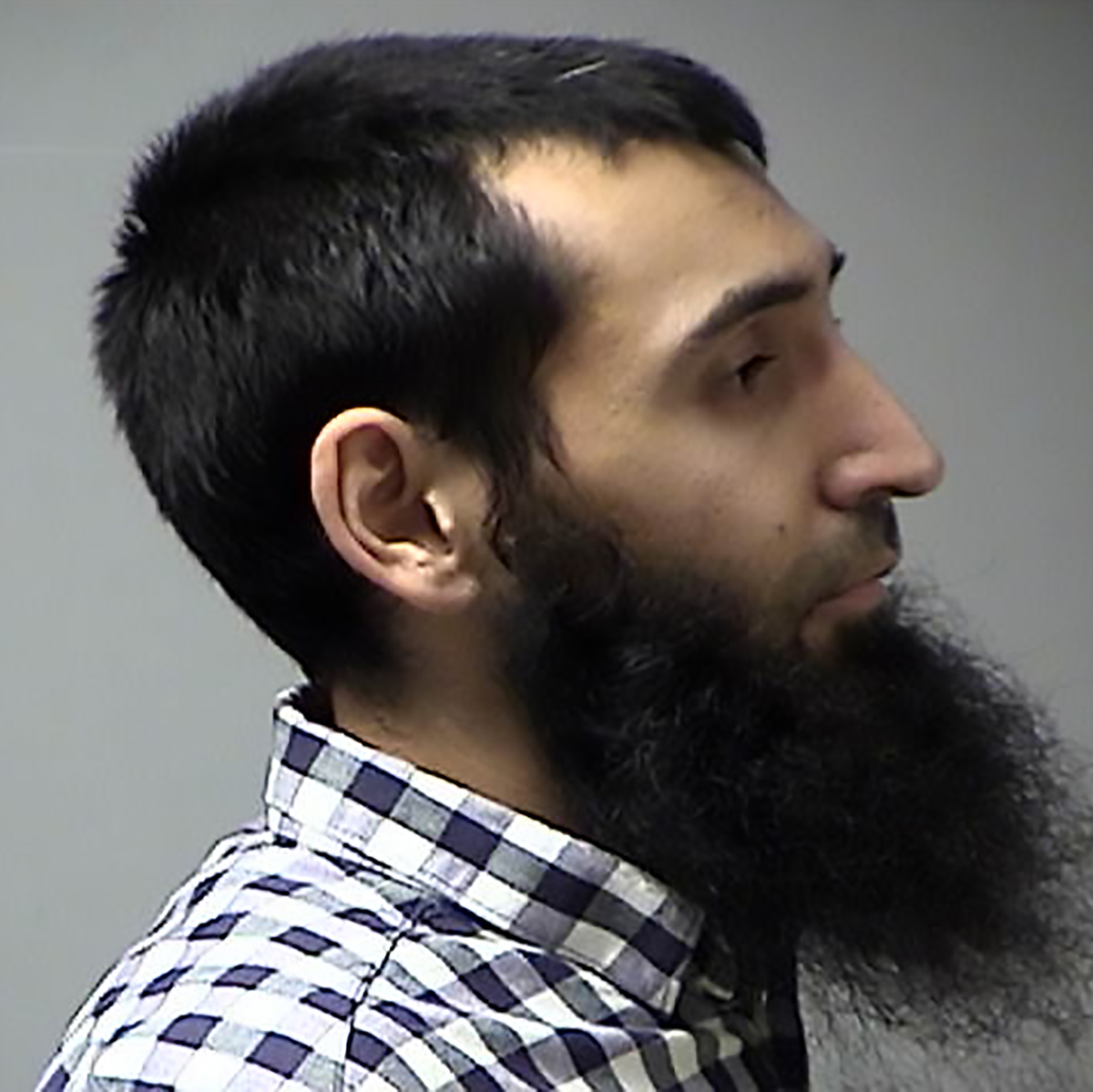 A handout photograph, obtained courtesy of the St. Charles County Department of Corrections in Missouri, shows Sayfullo Saipov. In April 2016, a warrant for Saipov was issued in Missouri over an unpaid traffic citation.

Leslie Danoff, who lives near the site of the attack and could see bodies on the ground from her window, told NPR she was grateful that first responders were on the scene quickly.

"We have so many schools around this area," she said. "And it was shortly after 3 [p.m.]. It could have been worse if the police hadn't responded as quickly as they did."

Saipov, 29, is an immigrant from Uzbekistan who has lived in Florida, Ohio and New Jersey and worked as a commercial truck driver and an Uber driver, NPR's Hansi Lo Wang reported. Saipov is a green card holder with a "diversity immigrant visa," meaning he arrived in the country through a lottery program.

Uber confirmed that Saipov passed a corporate background check and said it has not identified any security concerns from his time as an Uber driver. "We have reached out to law enforcement to provide our full assistance," a spokesperson told NPR.

Authorities said Saipov carried out the attack with a vehicle he rented from Home Depot.

The Associated Press reported that investigators worked overnight, shutting down a stretch of highway in Manhattan and also focusing on "a New Jersey home and a van in a parking lot at a New Jersey Home Depot store."

Meanwhile, the city's residents appear to be following Cuomo's earlier advice to "be New Yorkers and live your life." Officials said there was no sign of a larger plot, and with that, the city's Halloween festivities continued as planned.

Security measures in the city are being enhanced, officials said.

NYers are resilient and won't be deterred. Great to see large crowd at annual Halloween parade in Village. Thx for showing world who we are. pic.twitter.com/rl3gC0wXfl

Saipov moved to the U.S. in 2010 from Uzbekistan, a former Soviet state in Central Asia.

Acquaintances described him to The New York Times, The Cincinnati Enquirer and The New York Post as quiet, hardworking and friendly, and they expressed surprise at the attack. "He did not seem like a terrorist," one fellow Uzbek immigrant told the Times. "He was really calm," another told the Enquirer. "He is [a] very good guy," a friend told the Post, which described the man as shocked to hear about the attack.

But an Ohio truck driver named Mirrakhmat Muminov told the AP that Saipov "seemed to harbor radical views and saw his work life spiraling down."

"Muminov says Saipov lost his insurance on his truck because of a few traffic tickets," the AP reported. "He says companies stopped hiring Saipov, so he left for New Jersey."

Muminov told NPR's Martin Kaste that Saipov didn't seem to be very religious when he arrived in the United States but that he became more religious over time — praying more and going to the mosque more often.

Muminov described Saipov as "a little aggressive" and said he seemed depressed and "unhappy to be alive."

Batista said Saipov had been parking a Home Depot truck in the neighborhood for three weeks. "I guess he would bring it back and rent another one, maybe from another place, but they'll always be the same model," he said.

"And wouldn't use them for anything," Batista said. "Not construction. Nothing — like, you know he was always clean. He'll leave clean. He'll come back clean."

Batista said Saipov had been riding around with two other men. "Every time I saw him he was with the same two guys," Batista said.

John Miller, the NYPD deputy commissioner, said Saipov had not personally been the subject of an NYPD or FBI investigation — but had "links" to people who have been investigated.

On Wednesday, Uzbek President Shavkat Mirziyoyev sent a condolence letter to President Trump and volunteered his country's resources to assist with the investigation, according to multiple wire reports.

The comment was notable, the AP reports, calling Uzbekistan "one of the most closed off post-Soviet republics" and reporting that before now, the country "officially never commented or acknowledged any security incidents abroad involving Uzbek nationals."

On Tuesday, after the attack, President Trump tweeted that he ordered Homeland Security to "step up our already Extreme Vetting Program."

Dan Byman of Georgetown University and the Brookings Institution told NPR that the administration's currently proposed changes to the immigration system — so-called extreme vetting — would "probably not" have prevented this attack.

Dan Byman: Why The NYC Attack Was Called An 'Act Of Terror'

Why The NYC Attack Was Called An 'Act Of Terror'

Saipov "came from an area that wasn't on the list of top countries of concern," Byman said.

"The proposals don't call for constant monitoring once someone is in the country," he said. "It seems like this individual became much more radical relatively recently. So the ideas on the table don't seem particularly relevant to this attack."

Trump tweeted more criticism of the immigration system on Wednesday morning, stating that the suspect entered through the diversity visa program, which offers a lottery for countries with historically low rates of immigration to the U.S.

Saipov arrived in the U.S. on a valid diversity immigrant visa, the Department of Homeland Security has confirmed.

The facts are more complicated, as NPR's Brian Naylor reports:

"Schumer, then a member of the House, was a sponsor of the original program, part of an immigration bill that was approved on a bipartisan basis in 1990.

"It was signed into law by Republican President George H.W. Bush.

"In 2013, as a U.S. senator, Schumer actually proposed ending diversity visas as part of efforts by the so-called 'Gang of 8,' aimed at a broader immigration overhaul. ... The Gang of 8 measure died in the House because of GOP-led opposition."

The Washington Post reported that the alleged connection between Schumer, the green card lottery program and Saipov was widely reported on right-wing media late Tuesday and early Wednesday. The newspaper noted that the program has been debated for years, with opponents raising concerns over national security risks and the possibility of fraud.