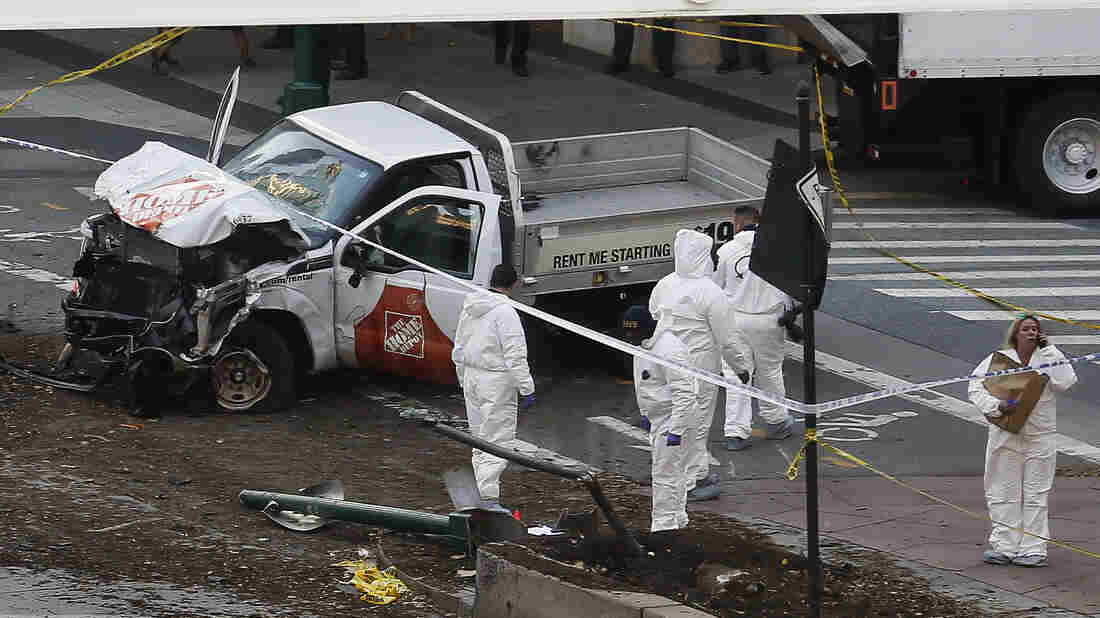 Authorities stand near a damaged truck after an attacker drove onto a bike path in New York City, striking and killing eight people Tuesday. The Islamic State has been calling on supporters to use vehicles to carry out attacks for the past year. Bebeto Matthews/AP hide caption 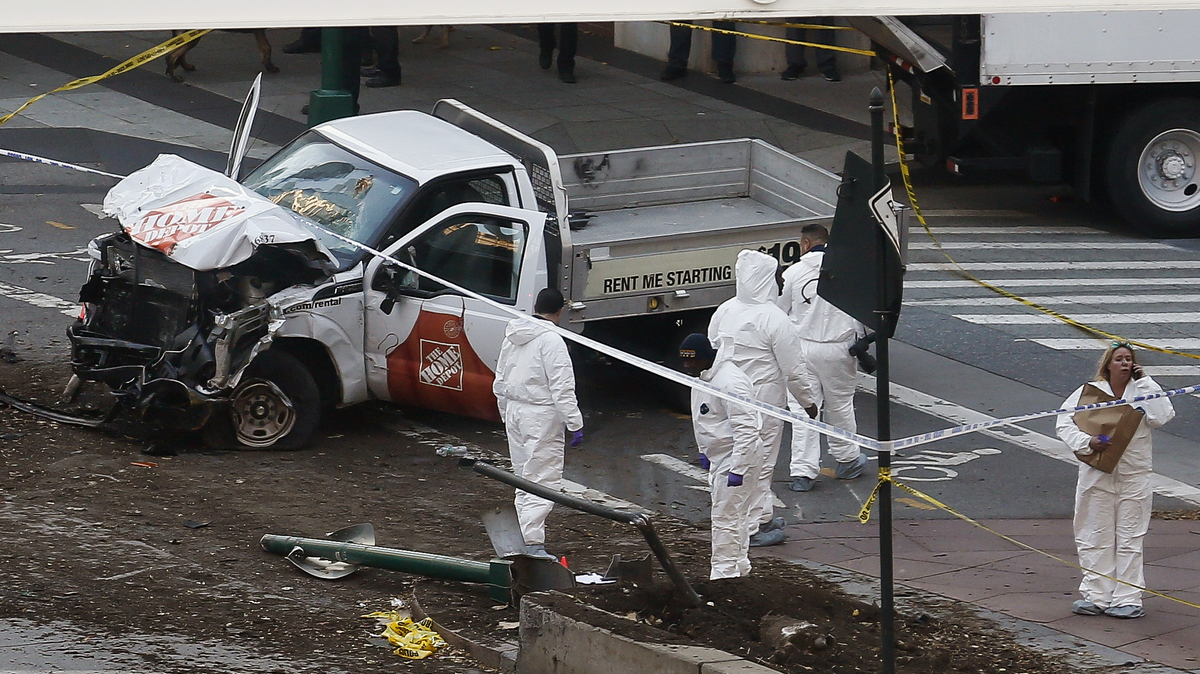 Authorities stand near a damaged truck after an attacker drove onto a bike path in New York City, striking and killing eight people Tuesday. The Islamic State has been calling on supporters to use vehicles to carry out attacks for the past year.

As the Islamic State has crumbled in its core territory in the Middle East, the extremist group has pressed individual supporters to carry out vehicle attacks in the West.

The lethal assaults have traumatized European cities for more than a year, and authorities are pointing to a similar motivation in the New York City attack that killed eight people on Tuesday.

New York Gov. Andrew Cuomo said the attack was a "classic case of a radicalization of a domestic jihadist who associated with ISIS and this is their new playbook. Very simple. Use a vehicle to cause harm."

The suspect, Sayfullo Saipov, 29, immigrated to the U.S. from the Central Asian nation of Uzbekistan in 2010.

A note referring to ISIS was found inside the truck, Cuomo told CBS News. The governor added: "The best evidence we have is that he was a lone wolf model," Cuomo added.

The Islamic State is at a vulnerable point as it struggles to remain a potent and visible force in the face of major defeats on the battlefield.

The group has lost all of its cities in Iraq and Syria, and now controls only small, isolated desert outposts that hold no strategic importance. These outposts are also under imminent threat from multiple forces, including the U.S. and its partners in the region.

On one level, the vehicle attacks can be viewed as an act of desperation as ISIS seeks to remain relevant on the global stage.

A number of attacks in Europe were carried out by individuals with little or no known contact with the group. ISIS has claimed responsibility, even if it had no apparent direct role.

However, as of Wednesday afternoon, neither ISIS nor any other group had claimed responsibility for the New York attack.

The attacks have kept ISIS in the spotlight. And ISIS may increasingly focus its efforts on these small, individual attacks because they are so lethal, so hard to stop and they generate enormous publicity when they take place in Western capitals.

ISIS began aggressively promoting vehicle attacks a year ago with detailed instructions in its online magazine Rumiyah, or Rome. It's so named because ISIS dreams of eventually seizing Rome, historic center of the church.

The article encourages assailants to use the biggest, heaviest vehicle they can obtain, and aim for the largest crowd they can find. The assailants are instructed to keep driving as long as possible, but if they can't continue, then the driver should get out and use a "secondary weapon," like a gun or a knife, to attack people on foot.

"An appropriate way should be determined for announcing one's allegiance" to ISIS, the group adds. It suggests writing a note with statements like, "The Islamic State will remain."

Saipov wrote, "The Islamic State will endure forever." He also had knives and two "imitation guns" in the truck, according to police.

The deadliest vehicle attack was in Nice, France, which killed more than 80 people in July 2016. The most recent was in Barcelona, Spain, this past August, leaving 14 dead. Most such attacks have been in Europe, where vehicles provide an alternative to a gun or other weapon, harder to obtain compared to the U.S.

But the New York attack was not the first in the U.S. An assailant was shot dead after he struck a group of pedestrians and then began stabbing others on the Ohio State campus in Columbus in November 2016.

The U.S. has suffered 12 deadly attacks and 103 deaths at the hands of radical Islamists since the Sept. 11, 2001, according to the monitoring group New America. Most have been carried out by individuals, or two people at most. Tuesday's attack appears to fall into that category as well, according to the reports so far.

It's important to remember that the U.S. has not suffered a major attack orchestrated by a foreign terrorist group on American soil over the past 16 years. Virtually all the deadly attacks since Sept. 11, 2001, have been carried out by home-grown extremists.

Saipov is an exception to that pattern. He legally entered the United States from Uzbekistan seven years ago.

A former Soviet republic, Uzbekistan is culturally Muslim though largely secular. Mainstream Islam in the country is moderate, though Uzbekistan has had a low-level insurgency led by Islamist radicals dating to the collapse of the Soviet Union.

The New York attack has already reignited the immigration debate, though Uzbekistan was not considered a leading exporter of extremists and not included in any of President Trump's restrictions on foreigners coming to the United States.