Accessibility links
Navy Says Deadly Ship Collisions Were 'Avoidable,' Faults Lack Of Preparation : The Two-Way The U.S. Navy released its findings on two separate crashes involving destroyers that killed a total of 17 sailors this summer. "Both of these accidents were preventable," the Navy's top officer said. 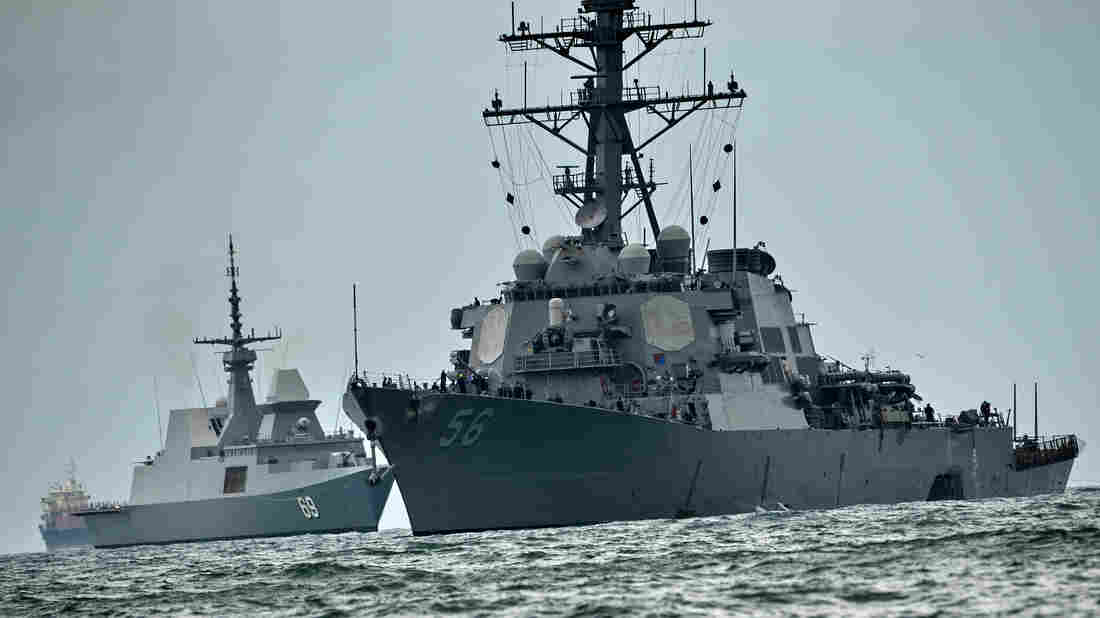 The USS John S. McCain sails toward a naval base in Singapore in August, the massive dent in its side visible on the right side of the frame. The destroyer had collided with a tanker just hours before — the second such deadly collision involving a U.S. Navy warship in several months. Roslan Rahman/AFP/Getty Images hide caption 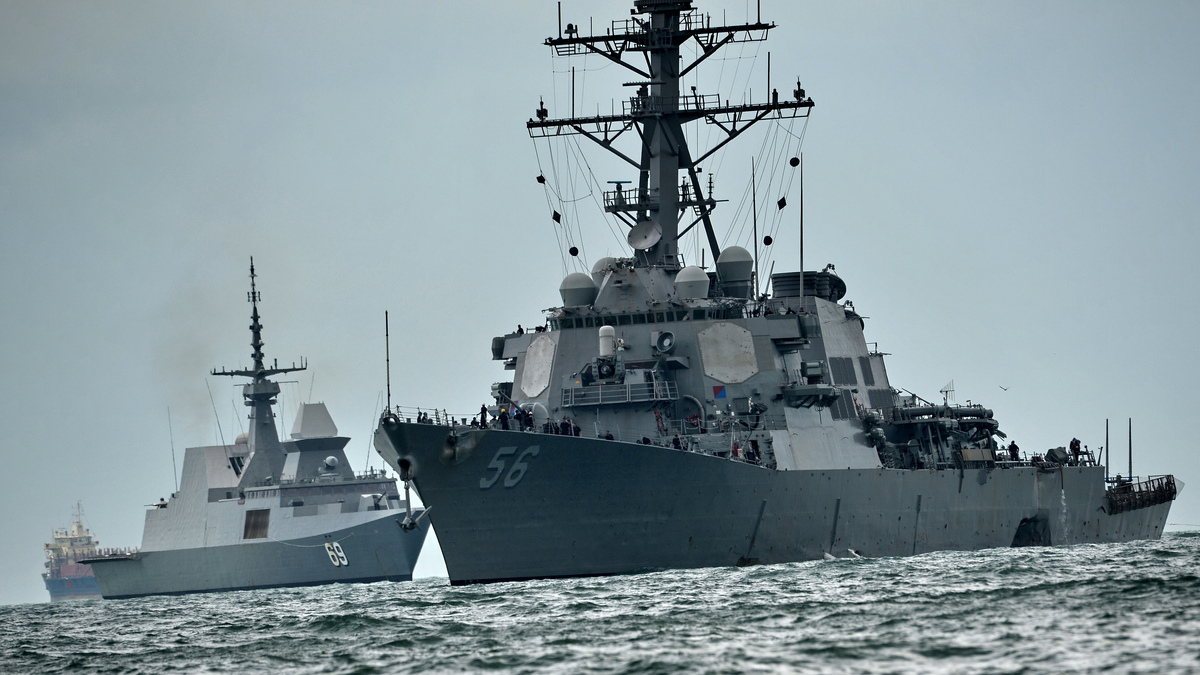 The USS John S. McCain sails toward a naval base in Singapore in August, the massive dent in its side visible on the right side of the frame. The destroyer had collided with a tanker just hours before — the second such deadly collision involving a U.S. Navy warship in several months.

The U.S. Navy has completed its investigations into the deadly collisions that damaged two of its warships just months apart this summer, describing what went wrong in a report published Wednesday. The report is dozens of pages long, but if those errors could be described in a word, it would be "avoidable."

"Both of these accidents were preventable and the respective investigations found multiple failures by watch standers that contributed to the incidents." the Navy's top officer, Adm. John Richardson, said in a statement.

In June, the USS Fitzgerald collided with a Philippine-flagged container ship off Japan, leaving seven sailors dead in their berthing compartments. Just over two months later — and just days after several of the Fitzgerald's leaders were relieved of their duties — the USS John S. McCain crashed into a Liberian-flagged tanker at the eastern entrance to the Strait of Malacca near Singapore in a startlingly similar incident that left 10 sailors dead.

In both cases, the 300-crew destroyers collided with ships more than three times their size in gross tonnage.

Referencing the later incident, the Navy report concluded that the McCain crash resulted partly from a lack of knowledge among those sailors on watch — some of whom had recently been transferred from another ship that had "significant differences between the steering control systems."

But they weren't alone, the report notes:

"Multiple bridge watchstanders lacked a basic level of knowledge on the steering control system, in particular the transfer of steering and thrust control between stations. Contributing, personnel assigned to ensure these watchstanders were trained had an insufficient level of knowledge to effectively maintain appropriate rigor in the qualification program. The senior most officer responsible for these training standards lacked a general understanding of the procedure for transferring steering control between consoles."

As with the Fitzgerald, the Navy relieved the McCain's two top officers of their duties last month. And before that, Vice Adm. Joseph Aucoin, the three-star commander of the 7th Fleet, was also relieved of his duties in connection with the collisions.

How Could The Navy Destroyer Collision Happen?

Still, in assessing what happened with the Fitzgerald, the report did not reserve all of its blame for leadership, again faulting a lack of preparation.

"Many of the decisions made that led to this incident were the result of poor judgment and decision making of the Commanding Officer," the report says. "That said, no single person bears full responsibility for this incident. The crew was unprepared for the situation in which they found themselves through a lack of preparation, ineffective command and control, and deficiencies in training and preparations for navigation."

The report follows lawmakers' closed-door meeting on the incidents Tuesday, after which Sen. John McCain, R-Ariz., lamented a Navy he believes to be stretched thin and underfunded.

"We're putting those men and women in harm's way to be wounded or killed because we refuse to give them the sufficient training and equipment and readiness," said McCain, son and grandson of the two men for whom one of the damaged destroyers was named, according to The New York Times. "It's a failure of Congress. It's on us."

In his statement, Richardson nevertheless expressed optimism that these ships' "avoidable" mistakes would indeed be avoided in the future.

He added: "We will spend every effort needed to correct these problems and be stronger than before."