Accessibility links
NASA Astronaut Dick Gordon Has Died At Age 88 : The Two-Way As a child in the Great Depression, he never dreamed of being a pilot — let alone an astronaut who would be one of just 24 people to fly to the moon. He had two of the early spacewalks. 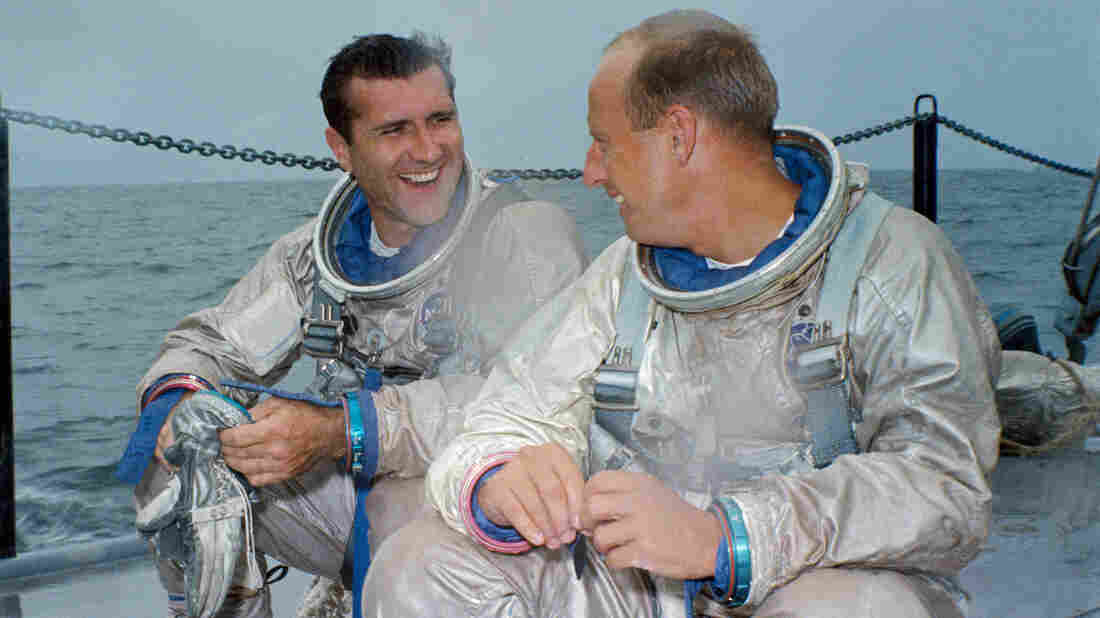 In 1966, astronauts Dick Gordon (left) and Pete Conrad trained for Gemini 11 in the Gulf of Mexico aboard the NASA Motor Vessel Retriever. NASA hide caption 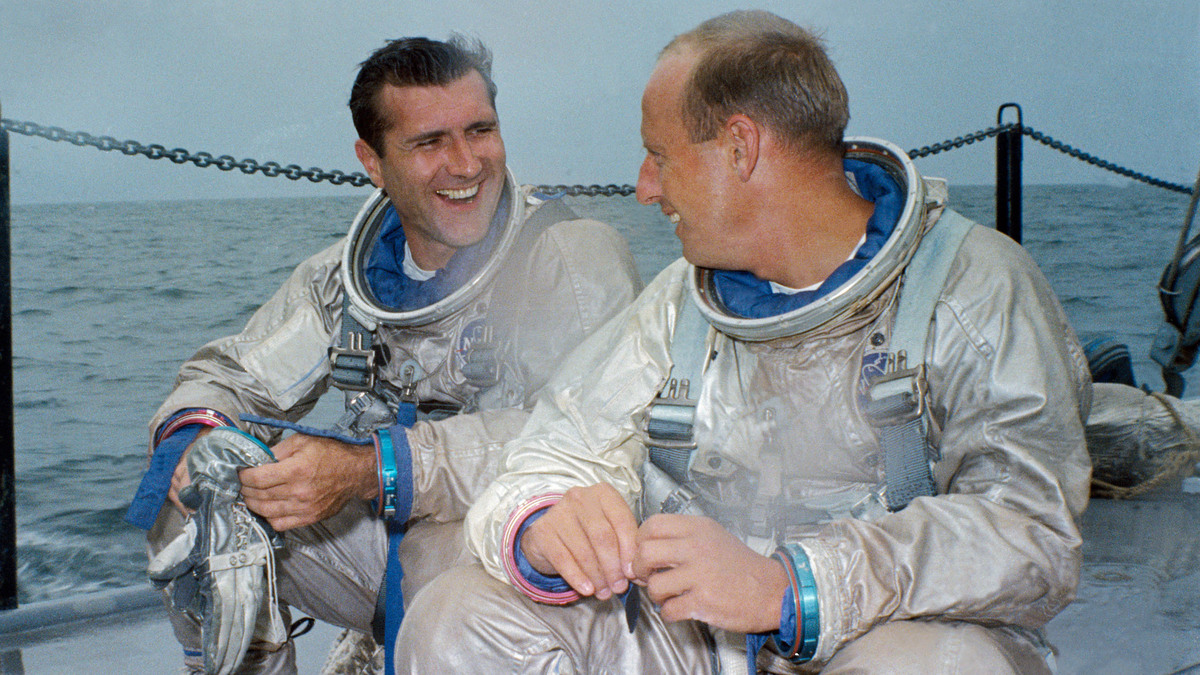 In 1966, astronauts Dick Gordon (left) and Pete Conrad trained for Gemini 11 in the Gulf of Mexico aboard the NASA Motor Vessel Retriever.

Astronaut Dick Gordon who flew to the moon but never got a chance to walk on the surface has died at his California home at age 88, according to NASA.

NASA Administrator Robert Lightfoot said, "Dick will be fondly remembered as one of our nation's boldest flyers, a man who added to our own nation's capabilities by challenging his own. He will be missed."

Gordon never thought he would be a pilot — let alone an astronaut who would be one of just 24 people to fly to the moon. In fact, as a young boy, born during the Great Depression in 1929, he actually dreamed of being a priest or even a professional baseball player.

It wasn't until he entered Navy flight school that he first touched an airplane. But he knew right then that flying high and going fast were his life's callings. "Once I found out what that airplane could do for me or I could do for it, it was love at first sight," he said.

He received his wings as a naval aviator in 1953 and eventually became a test pilot and won the Bendix Trophy Race from Los Angeles to New York in 1961 (setting a new transcontinental speed record of 2 hours and 47 minutes). By this point, Gordon was all about going fast.

NASA selected him in the third group of astronauts named in 1963, and he first flew to space aboard Gemini 11 in 1966. It was a demanding three-day mission. He and mission commander Pete Conrad had a whole series of important tasks to perfect as NASA continued its march to the moon for the upcoming Apollo program.

Gordon had two spacewalks — at a time when NASA still hadn't mastered them. He ran into problems from the start. Gordon labored somewhat alarmingly outside the capsule — breathing heavily and sweating profusely.

"How are you doing?" asked Conrad.

"Alright. Just rest. You've got plenty of time. You've only been out nine minutes." 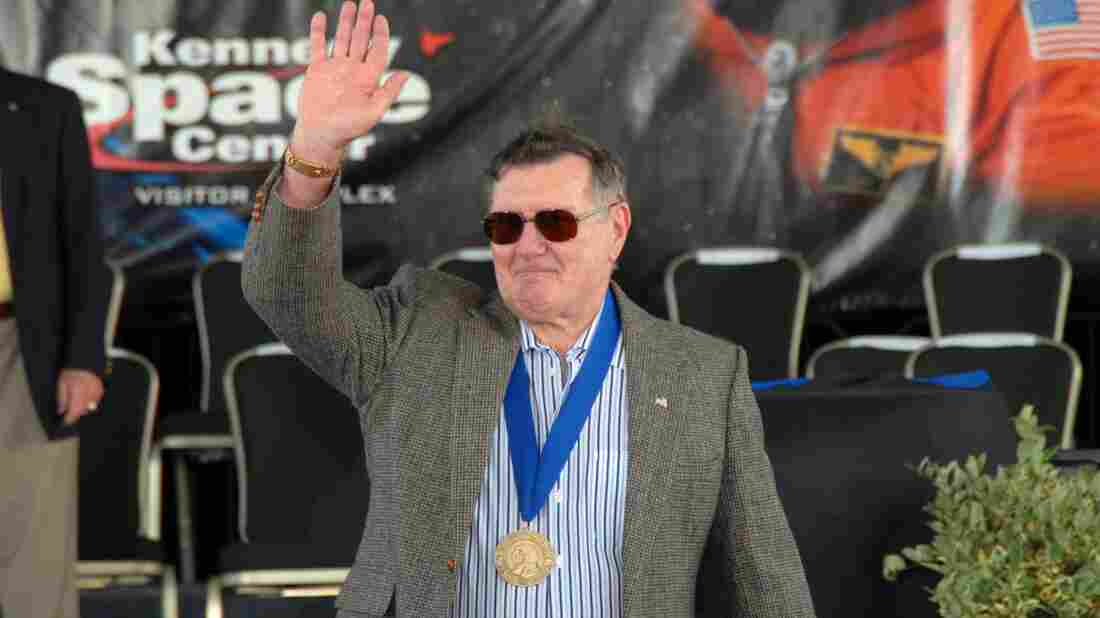 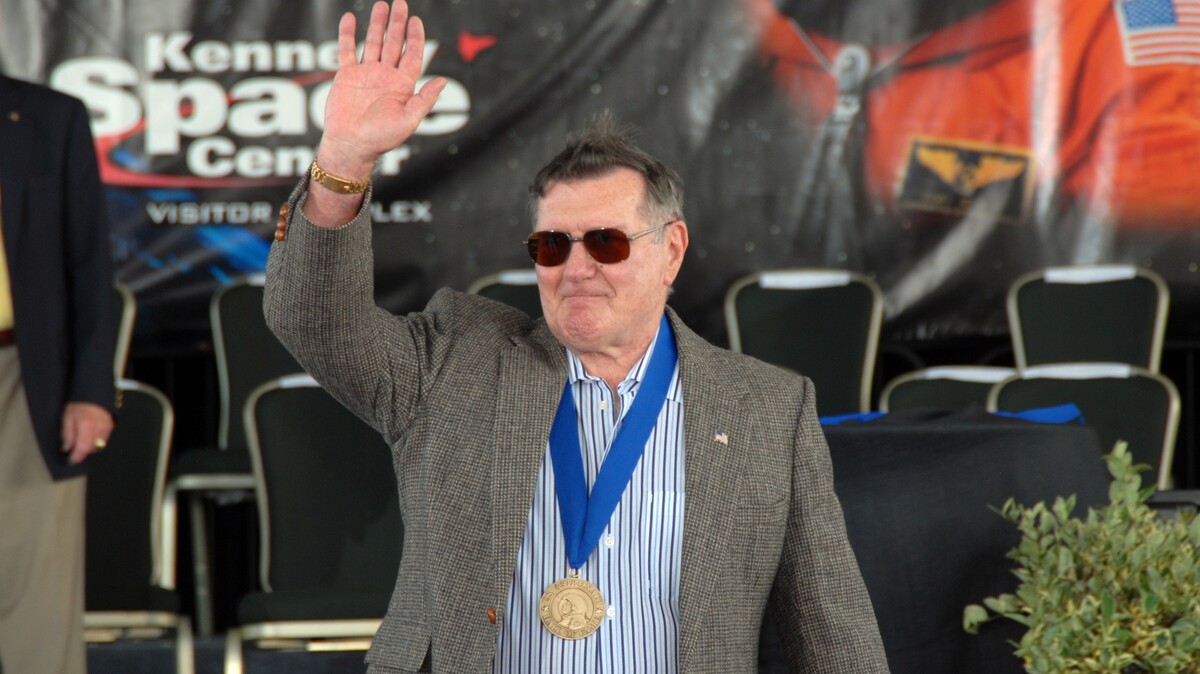 Astronaut Dick Gordon, a member of the U.S. Astronaut Hall of Fame, attends a 2009 event at Cape Canaveral, Fla.

Gordon's visor was fogging up as he struggled in the weightlessness (much like had happened in previous spacewalks). There were no handholds or places to pin his feet, and he kept floating away from the spacecraft. "I equate the experience I had with trying to tie your shoelaces with one hand," he remembered during an interview with NPR in 2016. "It's an impossible task and we learn from that. I think we learn more from our failures and mistakes than we do with anything else."

NASA made it to the moon by the end of the 1960s because it overcame and learned from obstacles like this one.

Gordon flew again in 1969 on Apollo 12, the second mission to land on the moon. He was the command module pilot and stayed behind, circling the moon as Conrad and Alan Bean walked on the surface.

For 42 hours, he was by himself and said he loved it. When he wasn't busy conducting experiments and taking pictures, he enjoyed the solitude — especially as he looked back at the planet: "Makes you think about the fragility of our Earth and the things we do to it to make you realize how fragile it is."

Gordon was in line to command a later lunar mission, perhaps Apollo 18. But that flight was canceled. He was disappointed he never got to walk on the moon but proud of his NASA tenure. After he left the space agency, he became a vice president of the New Orleans Saints football team and later worked for several oil and gas companies.