Accessibility links
The Grasshopper In The Van Gogh : The Two-Way When museum conservators examined Vincent Van Gogh's Olive Trees, they found something curious stuck in its paint: a grasshopper. Could it be just some weird leftover — or a crucial clue?

The Grasshopper In The Van Gogh

The Grasshopper In The Van Gogh

Look at Vincent Van Gogh's Olive Trees closely enough, and you'll find the subtle intricacies of his play with color, his brushstrokes, perhaps even his precise layers of paint atop the canvas.

You'll also find a grasshopper. Well, parts of one, anyway. 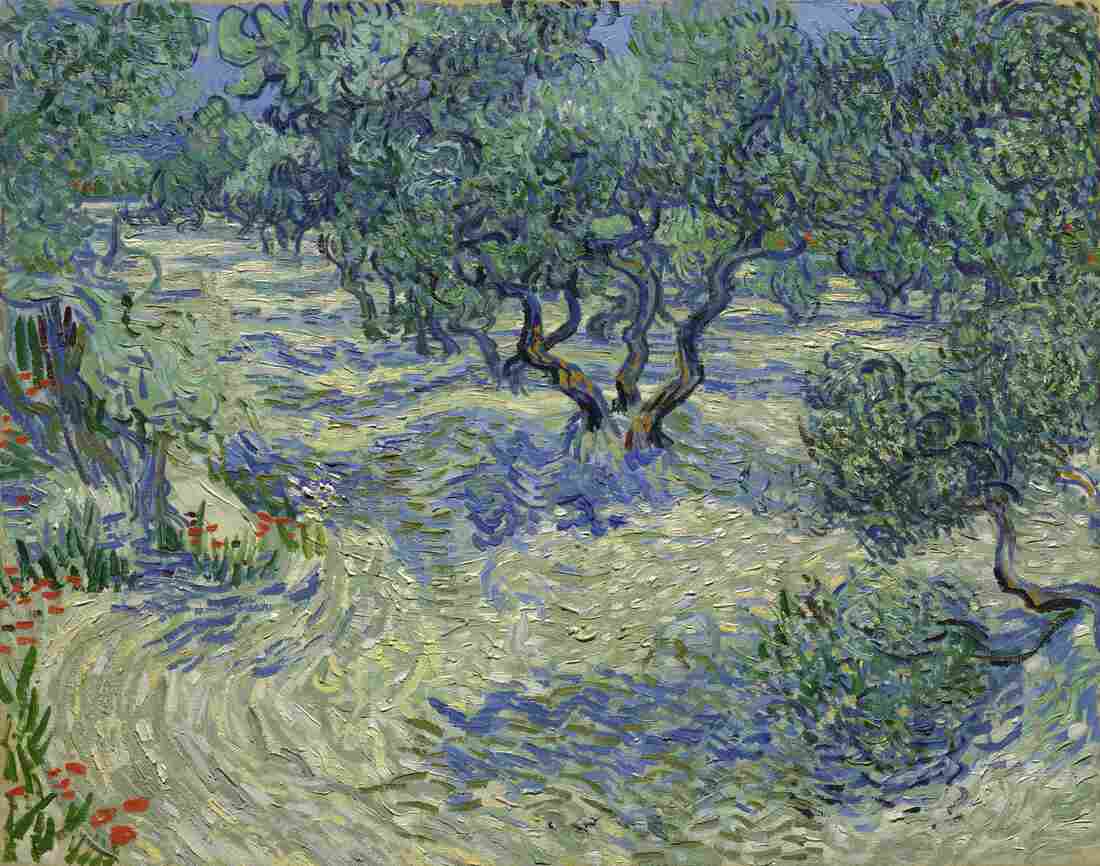 Vincent Van Gogh's Olive Trees, made with oil on canvas in 1889. See the shadow cast by that small tree on the far right side? There's a grasshopper lurking in that shade. Courtesy of the Nelson-Atkins Museum of Art hide caption

toggle caption
Courtesy of the Nelson-Atkins Museum of Art 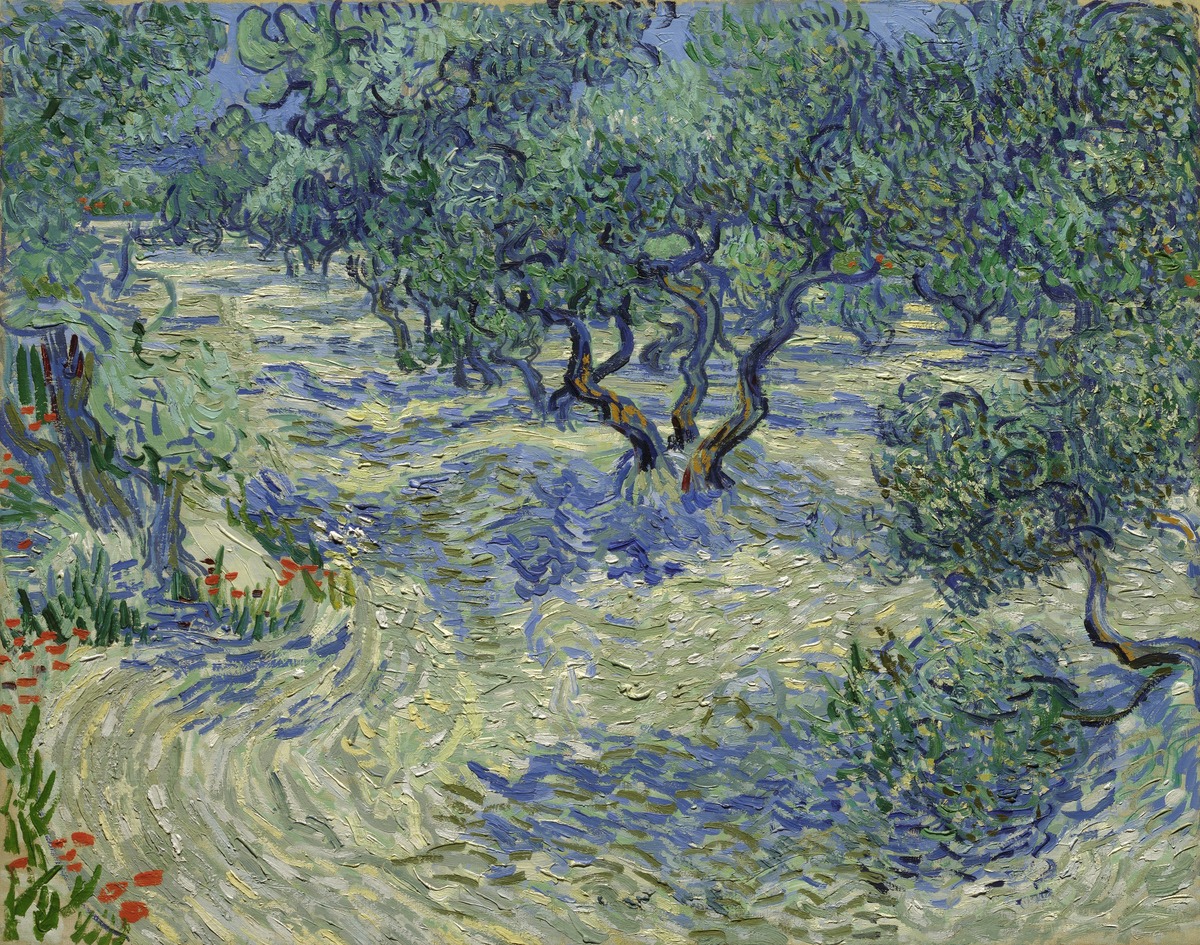 Vincent Van Gogh's Olive Trees, made with oil on canvas in 1889. See the shadow cast by that small tree on the far right side? There's a grasshopper lurking in that shade.

Courtesy of the Nelson-Atkins Museum of Art

Conservator Mary Schafer had been examining some paintings at the Nelson-Atkins Museum of Art in Kansas City, Mo., placing each one under a microscope for a detailed look — when, remarkably, she stumbled on a weird substance stuck in the thick layers of paint on Van Gogh's piece. There, tucked in the shade cast by the olive tree in the painting's right foreground, a curious, fragmented object stared back at her.

"She initially thought it was just leaf matter," Aimee Marcereau DeGalan, the museum's senior curator of European art, tells NPR. Given the fact Van Gogh did a lot of his painting outside, "it's not unusual to find parts of leaves or dirt or sand" in some of his works.

Then she made out its head. 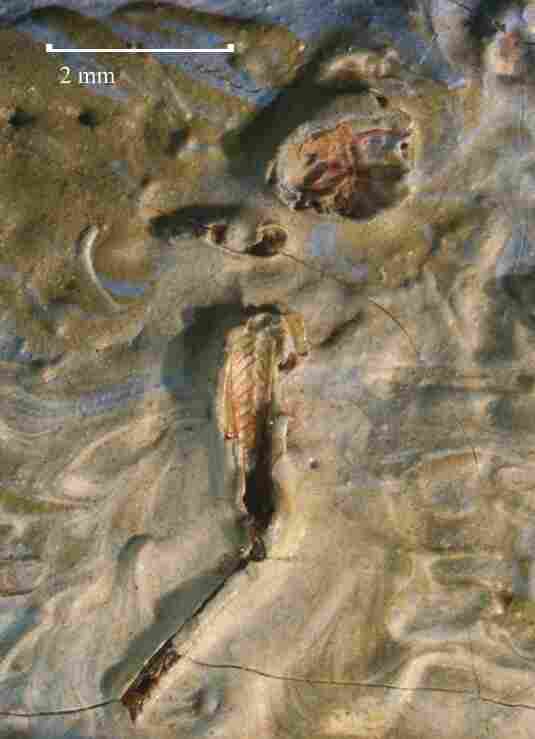 This image, taken through a microscope, captures the grasshopper embedded in the paint of Van Gogh's Olive Trees. Courtesy of the Nelson-Atkins Museum of Art hide caption

toggle caption
Courtesy of the Nelson-Atkins Museum of Art

Marcereau DeGalan says this was exciting — not so much because she and Schafer were secret entomology enthusiasts, but rather because the little guy promised to offer a better sense of when, exactly, Van Gogh completed Olive Trees.

You see, they've got a pretty good idea of when he painted it — sometime in 1889, after the famously troubled artist had checked himself into an asylum in the south of France. Just one year from death, Van Gogh probably "realized he was struggling," Marcereau DeGalan says, "and he was doing some soul-searching, some thinking about his life, his contributions, his place within society."

And all the while, he was painting. He completed a series of olive tree landscapes during his stay, they know that much — but they didn't know for sure which month (or months) this one, in particular, was produced.

That's where the grasshopper comes in. They hoped that perhaps, since scientists know a good deal about these insects' life cycles, they might be able to gauge the season of Van Gogh's work from how old this unfortunate grasshopper was when it got plastered in wet paint.

But alas, the grasshopper had no abdomen. A paleoentomologist — brought in specifically for this purpose — told them the absence of this rather useful body part meant the insect was likely dead on arrival, robbing its age of definitive significance.

"It could have just been floating around in the wind or been on the grasses and landed in this painting," Marcereau DeGalan explains. Or perhaps, because the insect was stuck near the bottom of the frame, it shows Van Gogh was dragging the cumbersome canvas home along with the rest of his equipment.

No longer a crucial clue, the grasshopper might just be something else: a leftover. Apparently, Van Gogh dealt with a lot of these errant bugs when he was outside painting — at one point even writing to his brother that "I picked nearly 400 flies off the surface of this canvas," in Marcereau DeGalan's words — so perhaps this grasshopper is merely evidence that he missed a spot.

But Marcereau DeGalan says there's something more here. The research that led them to this accidental discovery will continue — and besides, she adds, there's still something special about this grasshopper, "like ants getting caught in amber in prehistoric times."

"It just puts us in that moment and that place where they are," she says. "In an instant, it takes you to 1889 in a field outside the asylum where this bug had a bad day — or maybe a good day, because we're thinking about it all these many years later."