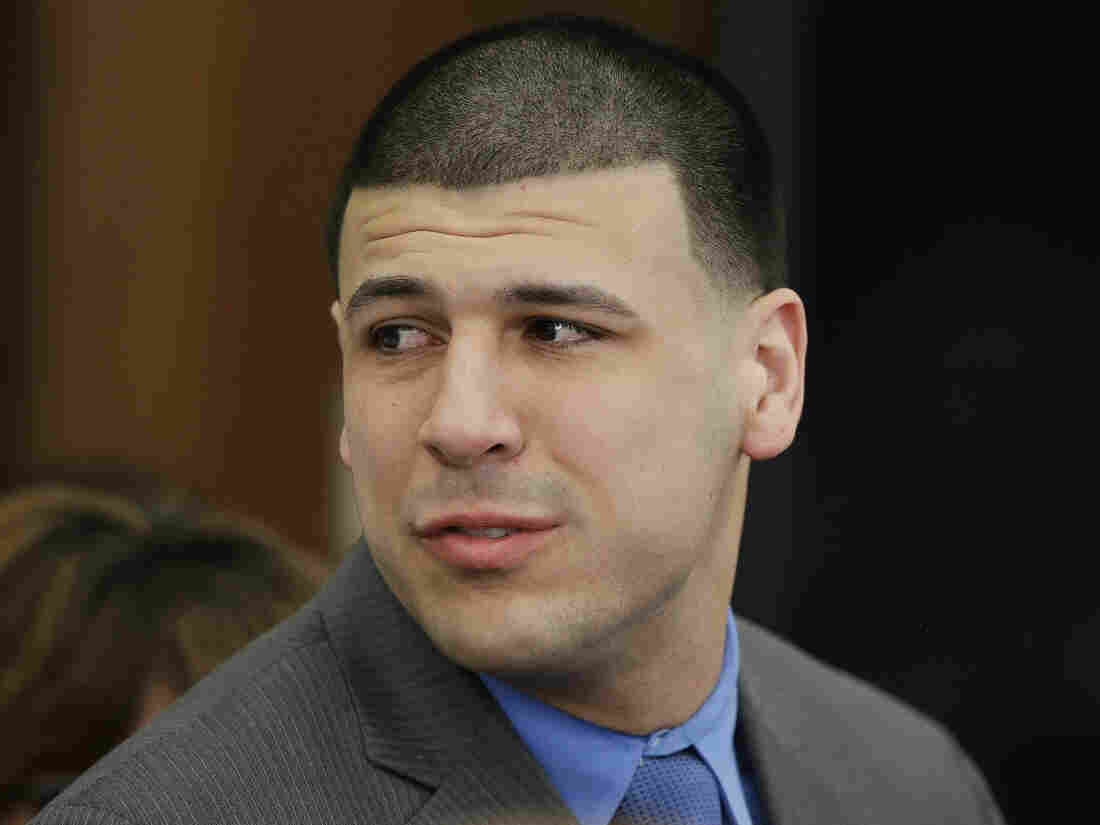 Former New England Patriots tight end Aaron Hernandez in a Boston courtroom days before he hanged himself in his prison cell.

The Boston researcher who examined the brain of former football star Aaron Hernandez says it showed the most damage her team had seen in an athlete so young.

Hernandez, whose on-field performance for the New England Patriots earned him a $40 million contract in 2012, hanged himself in a prison cell earlier this year while serving a life sentence for murder. He was 27 years old.

Dr. Ann McKee, a neuropathologist who directs research of chronic traumatic encephalopathy, or CTE, at Boston University, said her research team found Hernandez had Stage 3 CTE and that they had never seen such severe damage in a brain younger than 46 years old.

McKee announced her findings at medical conference on Thursday in Boston where she spoke publicly for the first time. 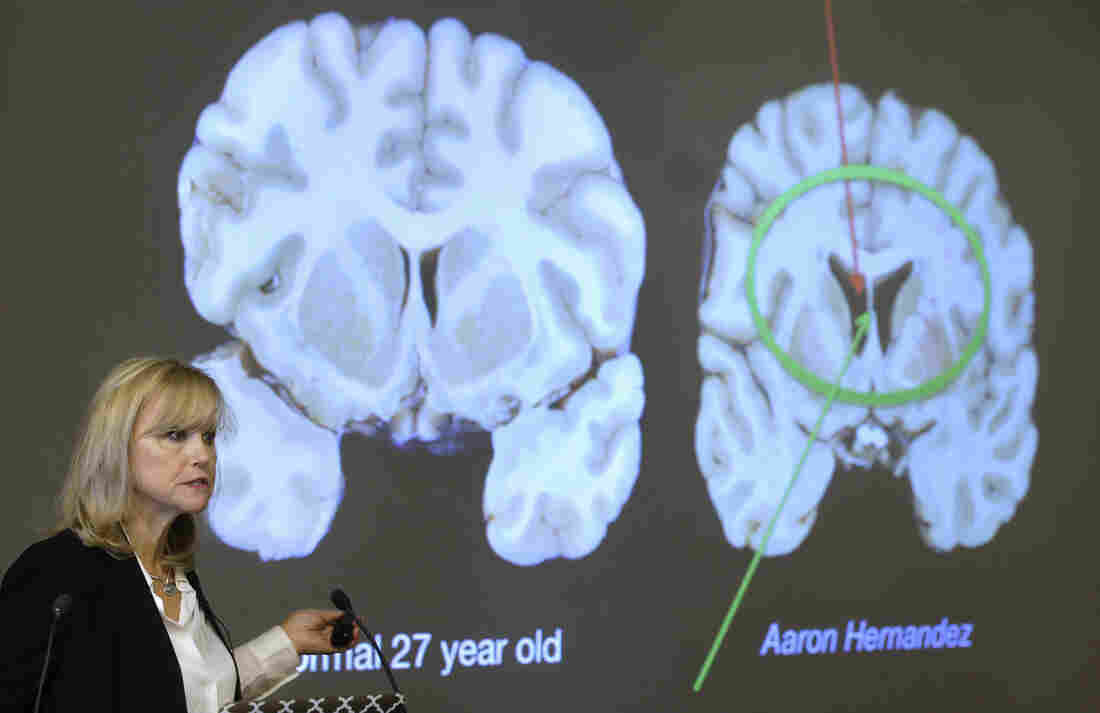 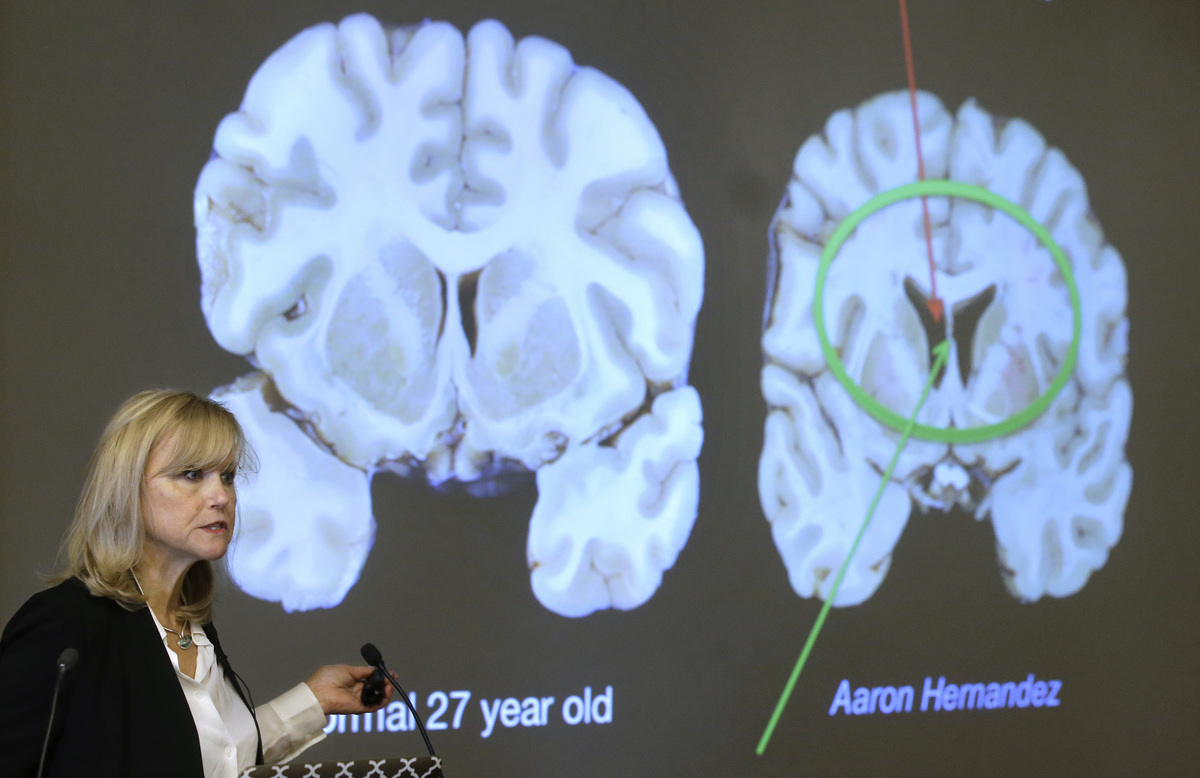 Among the lingering questions in the sports world and among brain researchers is, why did a young man with wealth, fame and a potentially bright athletic career ahead of him kill a friend and wind up in prison?

"We can't take the pathology and explain the behavior, but we can say collectively that individuals with CTE of this severity have difficulty with impulse control, decision-making, aggression, often emotional volatility, and rage behavior," said McKee as quoted by the Boston Globe.

McKee, who has pioneered research in brain injuries at BU's CTE Center, had previously issued a dispassionate stick-to-the-facts statement in September confirming that Hernandez had CTE Stage 3, (with Stage 4 being the most severe). At the time, Hernandez's attorney, Jose Baez, announced the filing of a lawsuit against the National Football League and the New England Patriots, alleging that they "failed to disclose, treat or protect" against the dangers of repetitive injuries to the former tight end's brain.

The organ appeared normal when the BU researchers received it in April, reports the New York Times. But after they sliced it in about half-inch sheaths, they found evidence of brain atrophy and damage to the frontal lobe. McKee showed slides comparing Hernandez's brain to one without CTE. The differences in the two samples, reports the Washington Post, left some physicians and conference attendees gasping in reaction.

But McKee acknowledged that her researchers rarely get a chance to study the brain of someone of Hernandez's age, so no conclusions could be drawn about whether his damaged brain was similar to those of other 27-year-old football players. But his brain is clearly at the severe end of the spectrum for his age group, said McKee.

"There is a concern that we're seeing accelerated disease in young athletes. Whether or not that's because they're playing more aggressively or if they're starting at younger ages, we don't know. But we are seeing ravages of this disease, in this specific example, of a young person," she said, as quoted by the Post.

McKee also said that Hernandez was born with a genetic marker associated with neurodegenerative diseases and that could have contributed to his CTE.