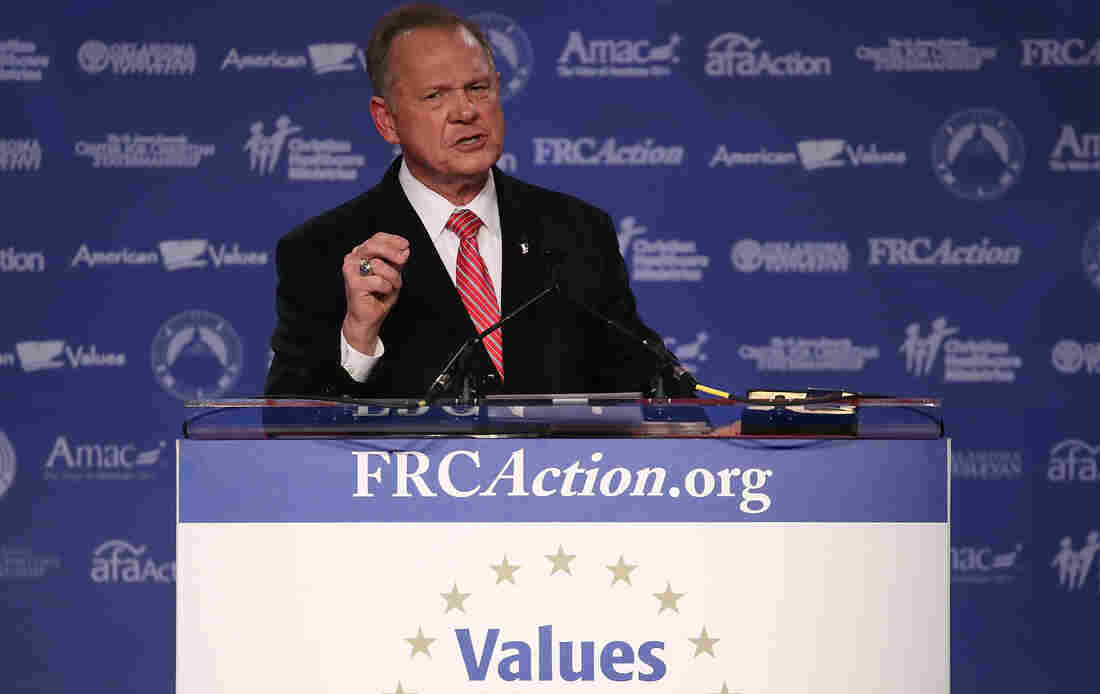 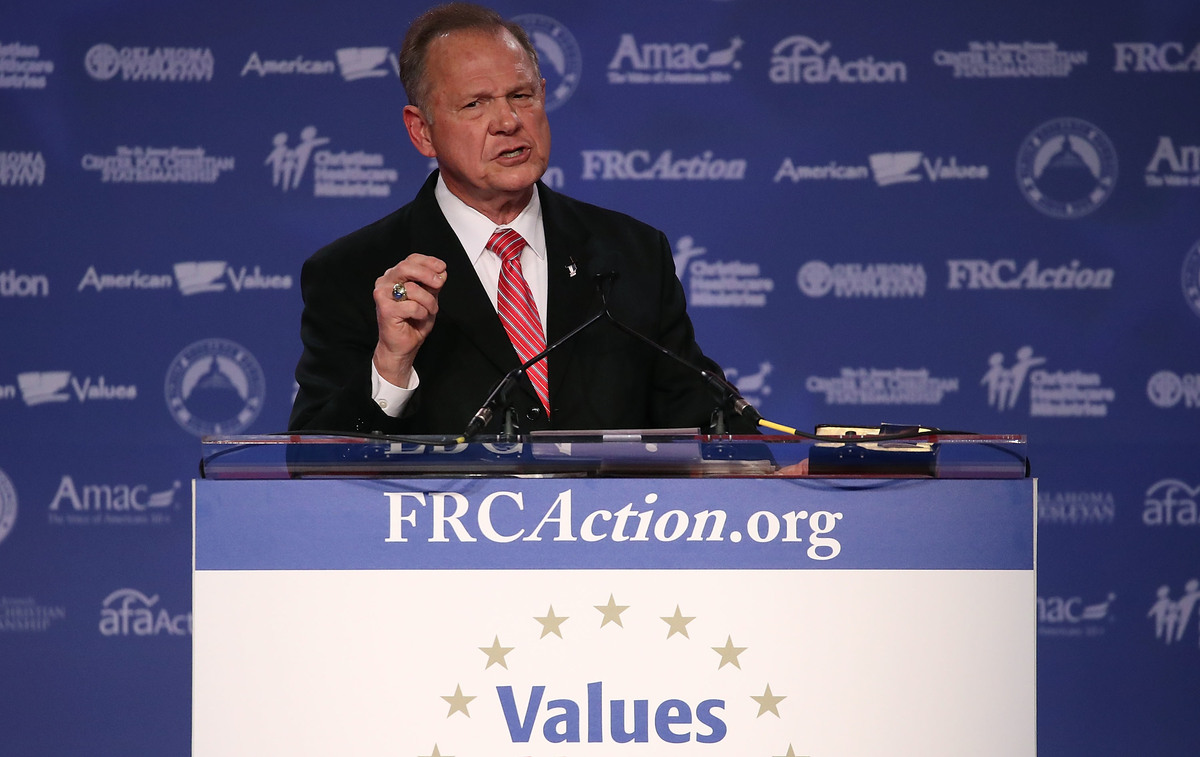 Alabama Republican Senate candidate Roy Moore is continuing to deny a Thursday Washington Post report detailing allegations that he initiated sexual contact with a 14-year-old girl when he was 32.

But in an interview with Fox News host Sean Hannity on his radio show Friday afternoon, Moore did not outright deny dating teenagers when he was in his 30s, giving several conflicting answers after being pressed by Hannity.

When Hannity asked Moore if he had ever dated 16-, 17- or 18-year-olds, he answered "not generally, no" and added that dating a girl in her late teens "would have been out of my customary behavior."

"I don't remember dating any girl without the permission of her mother," Moore also said.

Later the former Alabama chief justice said he did not recall ever dating a girl in her late teens and agreed that it would have been "inappropriate."

Moore vehemently denied ever knowing Leigh Corfman, the woman who went on the record, along with her mother, to detail to the Post the alleged assault at the age of 14, which was consistent and was corroborated by friends and records, the Post says. She described meeting Moore, who was then an assistant district attorney, at the courthouse in Etowah County, Ala., where he offered to watch her while her mother attended a custody hearing. Days later he took her home and removed their clothes, she said, touching her over her underwear and placing her hand on his underwear-clad genitals. The age of consent in Alabama is 16.

But he did admit to knowing two of the women also named in the Post report — Debbie Wesson Gibson, who says she was 17 when Moore asked her out after speaking to her high school civics class and that they dated for a few months, and Gloria Thacker Deason, who says she and Moore dated off and on when she was 18 and he was 32 after meeting at the mall.

Moore told Hannity that when he returned to Alabama from the military he "dated a lot of young ladies" but did not remember whether he dated either of those two women and didn't remember "specific dates."

Deason also told the Post that during a dinner date she believes Moore gave her alcohol when she was under the then-legal drinking age of 19. Moore also denied that.

Just ahead of his interview Friday with Hannity, Moore's campaign put out a statement more pointed than its reactions Thursday night:

I also believe that any person who has been abused should feel the liberty to come forward and seek protection.

I know that a lot of people wonder why this story was written. Why would women say these things if they are not true? I can't fully answer that because as much as I have disagreed vehemently on political issues with many people over the years, I cannot understand the mentality of using such a dangerous lie to try to personally destroy someone.

As a former Judge and administer of the law, I take the protection of our innocent as one of my most sacred callings. False allegations are gravely serious and will have a profound consequence on those who are truly harassed or molested.

Republican officials in Alabama and across the country have had mixed responses to the allegations against Moore. Some politicians are casting doubt on the women's stories, while others are expressing dismay — and, in some cases, Republican officials are defending Moore's alleged actions as not problematic at all.

I told him the 14-year-old became a Trump voter.

"That's the typical background or profile of somebody they would be using for that," he said.

The Post's report was based on interviews with 30 people. None of the four women approached the newspaper, the Post says; reporters reached out to them after hearing rumors about Moore's behavior in the '70s and '80s.

Moore's campaign has described the allegations as a Democratic attempt to undermine his bid for the Senate, ahead of the special election on Dec. 12. (The Post said none of the four women have donated to or worked for Moore's Democratic opponent in the race, Doug Jones.)

That line of response has been picked up by many others. Alabama Secretary of State John Merrill told the Huffington Post that the timing of the report was "odd," and Madison County GOP Chairman Sam Givhan told the outlet he is "obviously suspicious" of the story.

Some right-wing commentators, without outright denying the allegations, sought to downplay the significance of the story.

Joel Pollak, an editor at Breitbart, appeared on MSNBC to argue that three of the four women's accounts had "no business" in the national news, because a 30-something Moore pursuing relationships with 16- to 18-year-olds was not inappropriate. "As far as we know, there's only one relationship that's been alleged that's problematic," Pollak said, referring to Moore's alleged sexual contact with a 14-year-old.

He did not, however, attempt to defend the described sexual encounter with a 14-year-old, which would have been a criminal act under Alabama law at the time.

But multiple officials did defend the alleged behavior.

After a long pause, Alabama Bibb County Republican chairman Jerry Pow tells me he'd vote for Roy Moore even if Moore did commit a sex crime against a girl.

"I would vote for Judge Moore because I wouldn't want to vote for Doug," he says. "I'm not saying I support what he did."

Daniel Dale, a reporter for the Toronto Star, spoke with a number of Alabama Republican county chairs. One said he didn't see the "relevance" of a 32-year-old man kissing a 14-year-old girl or "trying" to touch her genitals. (The woman says Moore touched her over her underwear.) Another said that "14-year-olds don't make good decisions."

At least two said they would vote for Moore even if he had committed sex crimes against a 14-year-old.

"Other than being with an underage person - he didn't really force himself," Alabama Geneva County GOP chairman Riley Seibenhener tells me. "I know that's bad enough, but I don't know. If he withdraws, it's five weeks to the election...that would concede it to the Democrat."

And Alabama State Auditor Jim Zeigler seized headlines when he said there is "just nothing immoral or illegal" about the described encounter, comparing the assault to biblical marriages.

"Zachariah and Elizabeth for instance. Zachariah was extremely old to marry Elizabeth and they became the parents of John the Baptist," Zeigler told the Washington Examiner. "Also take Joseph and Mary. Mary was a teenager and Joseph was an adult carpenter. They became parents of Jesus."

Some evangelical leaders sharply criticized Zeigler's response, in comments to The Washington Post. Ed Stetzer, who is the Billy Graham chair of church, mission and evangelism at Wheaton College in Illinois, called the comparison to Mary and Joseph "simultaneously ridiculous and blasphemous."

Zeigler also noted, in defense of Moore, that Moore married a woman who is younger than he is — he was 38 and his wife 24 when they married.

As of Friday evening, Moore had lost the support of two U.S. senators who had endorsed him — Mike Lee of Utah and Steve Daines of Montana.

Having read the detailed description of the incidents, as well as the response from Judge Moore and his campaign, I can no longer endorse his candidacy for the US Senate.

I am pulling my endorsement and support for Roy Moore for U.S. Senate.

Sen. John McCain of Arizona, the GOP's 2008 presidential nominee, had already tweeted on Thursday that Moore should step aside "immediately."

The allegations against Roy Moore are deeply disturbing and disqualifying. He should immediately step aside and allow the people of Alabama to elect a candidate they can be proud of.

Former Massachusetts Gov. Mitt Romney, the 2012 Republican presidential nominee, also said the allegations against Moore were convincing and that he should withdraw.

Innocent until proven guilty is for criminal convictions, not elections. I believe Leigh Corfman. Her account is too serious to ignore. Moore is unfit for office and should step aside.

But overall nationally, GOP leaders were less likely to defend Moore's actions and more likely to say the allegations were disturbing, without necessarily ruling on their veracity.

Senate Majority Leader Mitch McConnell, R-Ky., said in a statement on Thursday, "If these allegations are true, he must step aside." McConnell backed Moore's opponent, appointed Sen. Luther Strange, in the primary.

On Friday, a day after news of the allegations broke, the NRSC filed paperwork with the Federal Election Commission to end participation in a joint fundraising committee. The Alabama Republican Party and the Republican National Committee, however, remain fundraising partners with Moore.

A previous version of this story misspelled Jim Zeigler's last name as Ziegler.