Accessibility links
President Donald Trump Said Vladimir Putin Again Denied Interfering In The 2016 U.S. Election : The Two-Way While Trump says he believes the sincerity of the Russian president's denials made during a summit in Vietnam, Trump agrees with U.S. intelligence agencies that Russia did interfere in the election. 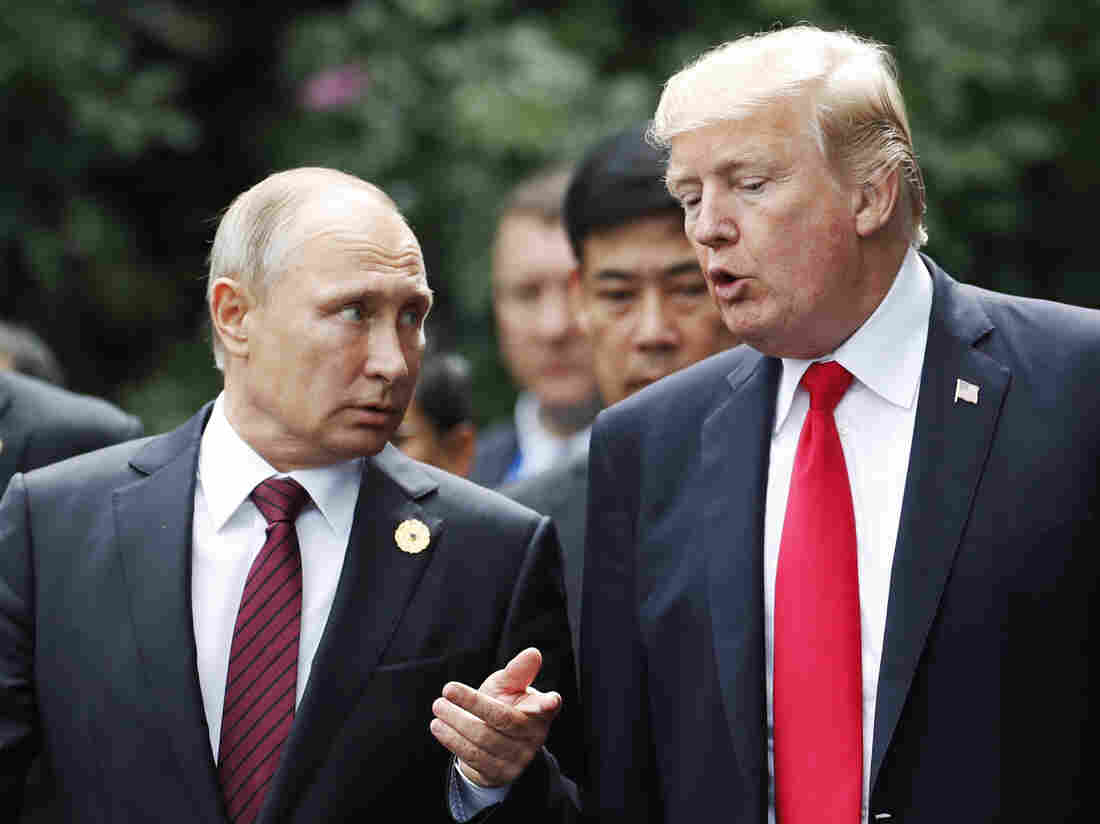 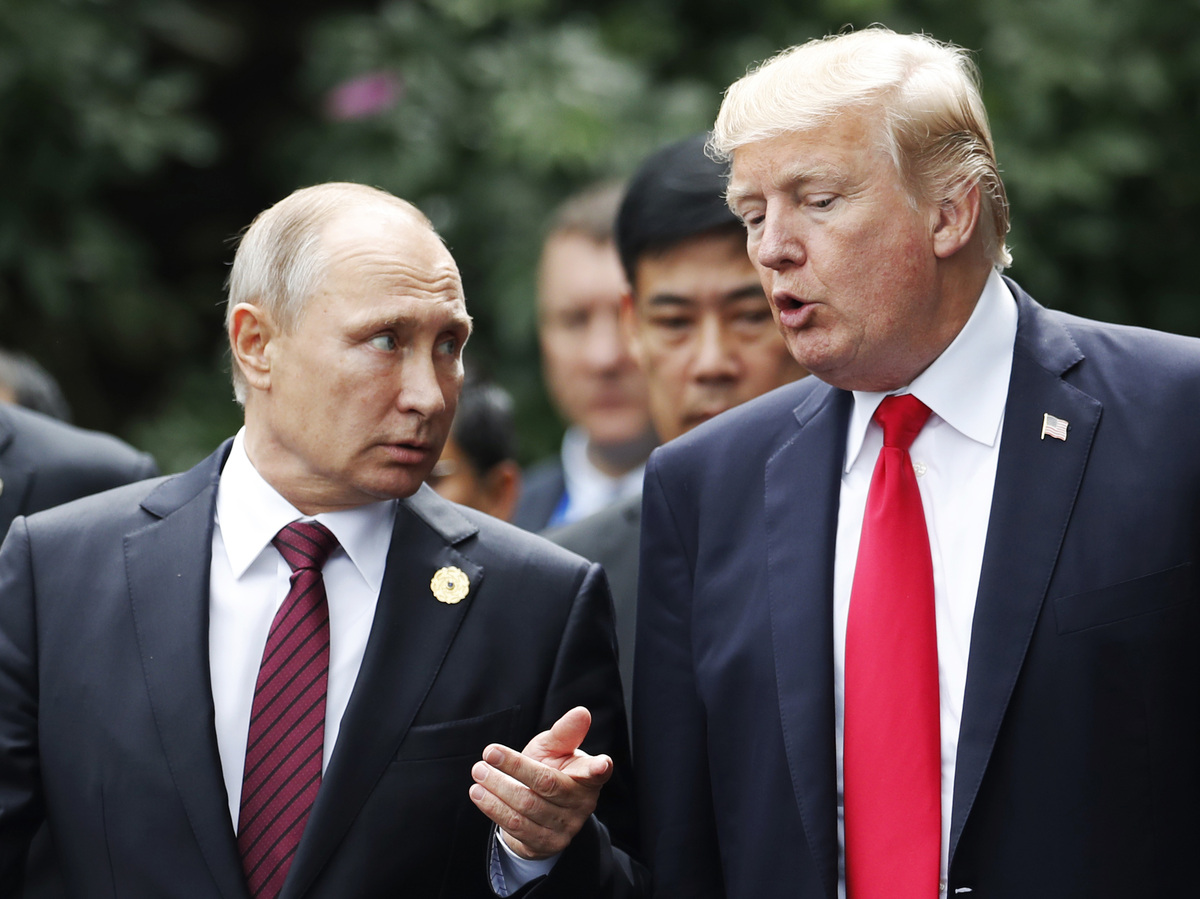 President Trump and Russian President Vladimir Putin talk during the family photo session at the APEC Summit in Danang, Vietnam, on Saturday.

President Trump told the White House press corps Saturday that he had had several brief conversations with Russian President Vladimir Putin on the sidelines of an Asia Pacific summit the two men were attending in Vietnam. During those conversations, Putin once again denied any interference in last year's election, Trump said. And, the president said, he believed that Putin believed there was no interference.

"He said he absolutely did not meddle in our election, he did not do what they are saying he did," Trump added.

Later on Sunday in Hanoi, and after receiving criticism for his remarks, Trump was asked for clarification on the topic. Trump responded that he agrees with U.S. intelligence agencies that Russia interfered in last year's election.

"I believe that he feels that he and Russia did not meddle in the election," he told reporters. "As to whether I believe it or not, I'm with our agencies, especially as currently constituted with their leadership."

Putin has repeatedly denied that the Russian government had any role in interfering in the 2016 presidential race. But the U.S. intelligence community has concluded that Russia did interfere, with an eye toward boosting Trump's political chances and damaging Hillary Clinton's. And CIA Director Mike Pompeo stands by the community's assessment, CNN reported. "The intelligence assessment with regard to Russian election meddling has not changed," the CIA said in a statement, according to CNN.

The latest conversation about the issue between Trump and Putin comes at a delicate time for the White House. Nearly two weeks ago, Department of Justice special counsel Robert Mueller unsealed a plea deal with George Papadopoulos, a former foreign policy adviser for the Trump campaign. Those court documents revealed contacts between Papadopoulos and Russians, including efforts by Papadopoulos to arrange meetings between officials of the campaign and representatives of the Russian government.

And Carter Page, another former foreign policy adviser for the Trump campaign, recently testified before the House Intelligence Committee about his contacts with Russians during his tenure with the campaign.

J.D. Gordon, another foreign policy adviser for the Trump campaign, recently characterized both Papadopolous and Page as "peripheral members of a relatively peripheral advisory committee" to the campaign.

But the recent revelations about Russian contacts with the campaign's foreign policy team have already caused some fallout for the administration. A onetime Trump campaign official withdrew his nomination for a post at the Department of Agriculture, in part because he was likely to face questions about the campaign's contacts with Russia during his confirmation hearing. And Attorney General Jeff Sessions is expected to once again face questions about Russia and the Trump campaign at a congressional oversight hearing next week.

Asked Saturday whether he believes Putin's denials, President Trump initially suggested the question of election interference needed to be set aside to focus on other concerns. "Well, look, I can't stand there and argue with him," Trump said. "I would rather have him get out of Syria; I would rather get to work ... on the Ukraine." And, "he could really help us on North Korea," Trump pointed out.

But Trump also told reporters that he accepts the sincerity of Putin's repeated assertions that the Russian government did not interfere in last year's election. "Every time he sees me he says, 'I didn't do that,' and I really believe that when he tells me that, he means it," Trump also said. "I think he is very insulted by it, which is not a good thing for our country," Trump added.

With multiple ongoing investigations into Russia's interference in the election, and possible collusion with the Trump campaign, the White House is sensitive about any formal sit-down with Putin. Trump told reporters on his way to Asia that he thought a meeting with the Russian president was expected. But White House press secretary Sarah Huckabee Sanders later said scheduling conflicts made such a meeting impossible.

Trump complained Saturday that attention to Russia's interference had created what he called an "artificial barrier" to doing business with Putin.

"Having a relationship with Russia would be a great thing, especially as it relates to North Korea," Trump told reporters. "It would take a lot of danger out of this world. It's a dangerous time — this isn't small stuff."

Trump said he and Putin did not have time to discuss North Korea during their brief conversations over the weekend.

Trump's remarks set off a round of criticism.

"There's nothing 'America First' about taking the word of a KGB colonel over that of the American intelligence community," frequent Trump foil Sen. John McCain, R-Ariz., said in a statement. "Vladimir Putin does not have America's interests at heart," McCain added, "To believe otherwise is not only naive but also places our national security at risk."

"You know who else is insulted by it, Mr. President? The American people," Rep. Adam Schiff, D-Calif., the ranking Democrat on the House Intelligence Committee said on Twitter, "You believe a foreign adversary over your own intelligence agencies."

And legendary broadcast journalist Tom Brokaw asked on Twitter "Where is GOP outrage?"

As he frequently does, the president used Twitter to respond to the criticism as he began his day Sunday in Hanoi, Vietnam. "Progress being made," Trump said of his discussions with Putin. Then, Trump turned to his critics, calling them "haters and fools."

When will all the haters and fools out there realize that having a good relationship with Russia is a good thing, not a bad thing. There always playing politics - bad for our country. I want to solve North Korea, Syria, Ukraine, terrorism, and Russia can greatly help!

Trump also mentioned "Crooked Hillary Clinton" and her effort to improve relations with Russia while secretary of state. And, Trump said, "Obama tried also, but he had zero chemistry with Putin."

Does the Fake News Media remember when Crooked Hillary Clinton, as Secretary of State, was begging Russia to be our friend with the misspelled reset button? Obama tried also, but he had zero chemistry with Putin.

The president also told reporters Saturday that his conversations with Putin mainly concerned Syria. He and Putin later issued a joint statement reiterating their determination to defeat ISIS in Syria, as well as their commitment to a political solution to that country's long-running civil war.

The statement says in part:

"The Presidents agreed that there is no military solution to the conflict in Syria. They confirmed that the ultimate political solution to the conflict must be forged through the Geneva process pursuant to UNSCR 2254. They also took note of President [Assad's] recent commitment to the Geneva process and constitutional reform and elections as called for under UNSCR 2254."