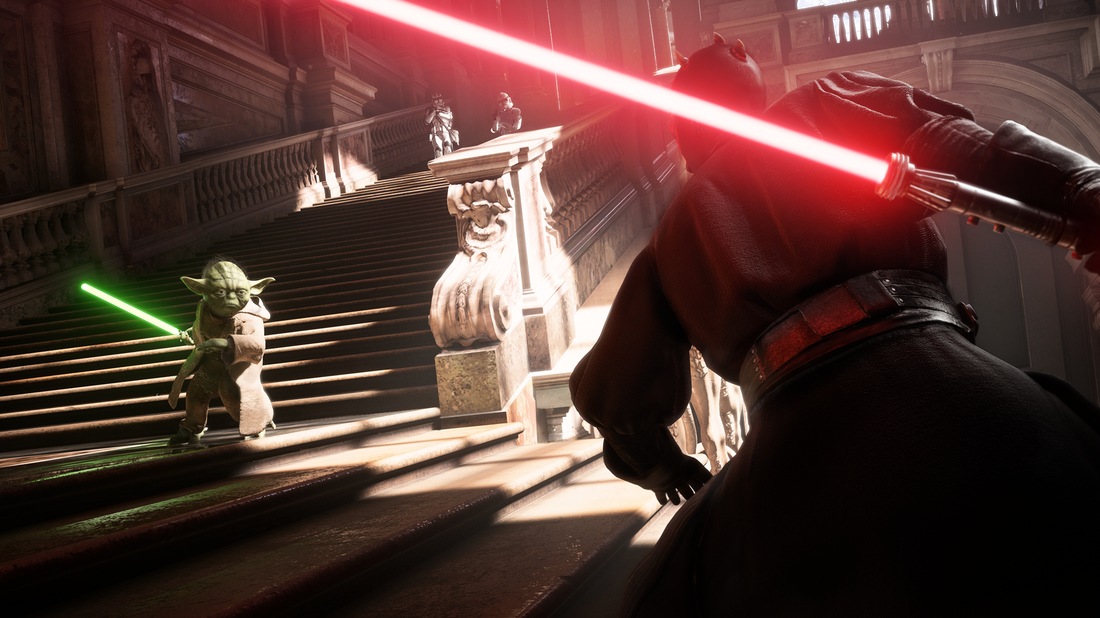 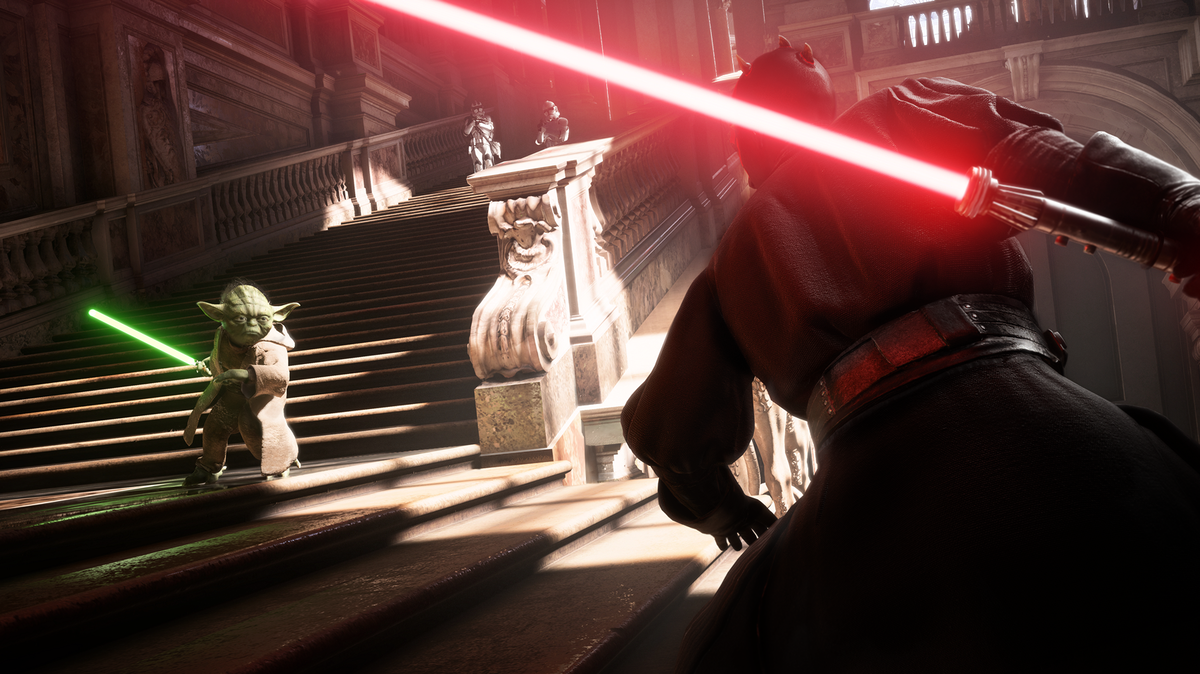 Star Wars Battlefront II, a new game from Electronic Arts set in the Star Wars universe, is scheduled to be released on Friday.

Following criticism of an in-game purchase system in the new game Star Wars Battlefront II, publisher Electronic Arts announced late Thursday, just hours before the game's worldwide release, that this system would be turned off while adjustments are made.

"This was never our intention. Sorry we didn't get this right," said a statement posted on Twitter.

Today, we turned off in-game purchases for #StarWarsBattlefrontII. The game is built on your input, and it will continue to evolve and grow. Read the full update: https://t.co/asGASaYXVp pic.twitter.com/vQSOmsWRgk

The release of a new entry into the Star Wars universe — be it film, TV series book or video game — is usually a time of celebration for fans of the decades-old franchise. That hasn't been the case for Star Wars Battlefront II, a video game published by Electronic Arts that's set to be released worldwide on Friday.

Electronic Arts, a $4 billion behemoth of the gaming industry, is most well known for its hugely successful sports games like the Madden and FIFA franchises.

Some players granted a preview of the company's new Star Wars game unleashed a torrent of backlash online this week over extra charges to unlock more content — beyond the game's $60-$80 retail price. While these types of in-game purchases aren't new to the industry, it's EA's response that's drawn the most ire from gamers.

One post from the company on Reddit became the most downvoted (read unpopular) in the social website's history.

Before we get there, let's explain what set gamers' midichlorians on fire in the first place.

Star Wars Battlefront II players can play the game in two different ways, in a single-player mode or in an online mode that sees up to 40 players battling it out across a galaxy far, far away.

It's in this multiplayer mode where a large amount of content — weapon upgrades, additional costumes and, most importantly, the ability to play as many iconic characters of the Star Wars universe such as Luke Skywalker and Darth Vader — is initially inaccessible.

That locked content can be opened in two ways: time spent playing or using real-world money. To put it simply, players can spend time earning in-game credits to purchase the upgrades and characters, or they can bypass that system by trading real money for those same credits.

How much money? As the gaming news site Rock, Paper, Shotgun puts it, "Spending an additional $100 on your $60 videogame wouldn't get you even close to having everything (without also putting a lot of hours in, at least), and I suspect the actual [spending] required to do so could well reach four figures."

Many fans would rather play the game as the force-choking, lightsaber-wielding Darth Vader right out of the box. Still, that extra cost is what had many players fuming.

"Seriously? I paid [$80] to have Vader locked?," Brett Hiebert, a 30-year-old gamer who participated in beta testing the game, wrote on the now-historic Reddit thread.

That thread started a massive online discussion with other gamers. EA's community team joined the discussion and tried to explain the idea behind the game's unlock system.

"The intent is to provide players with a sense of pride and accomplishment for unlocking different heroes," the EA post began.

Comment from discussion Seriously? I paid 80$ to have Vader locked?.

That set off a Jar Jar Binks-level online furor.

Hiebert told NPR via Reddit that he respected the company trying to defend itself, but that it "felt like another slap in the face for consumers."

"I felt like they literally preyed on Star Wars fans and their wallets," he said. "Putting the majority of Star Wars fans' favorite characters behind pay walls disgusted to me to no end, it was blatant money grabbing."

Additionally, the upgrades could conceivably give players willing to spend the extra money an unfair advantage over others. EA even described some of the upgrades in a press release as "delivering superior firepower, deadly weapon modifications and epic combat abilities."Or as gamers simply call it, a pay to win system.

EA so far hasn't responded to NPR's requests for comment. However, the company did respond online after the initial wave of controversy by lowering the cost of the unlocks.

"We're making the changes to the credit levels for unlocking heroes and we're going to keep making changes to improve the game experience over time," wrote John Wasilczyk, an executive producer on Battlefront II. "We welcome the conversation."

Wasilczyk and two other members of his team continued that conversation in an additional Q&A with gamers on Reddit. In that discussion, associate design director for the game said it is a problem the team is looking to solve: "I think [loot] crates can be a fun addition as long as you don't feel forced to engage with them in order to progress," Dennis Brannvall wrote. "We're looking to add additional ways to progress your favorite character or class, while allowing crates to be a fun thing for those who want to engage with them."

Even though the controversy has flared just ahead of the holiday season, some analysts say it isn't likely to have an adverse effect on sales.

Merrill Lynch analyst Justin Post told CNBC that he saw "recent controversies as a potential risk for unit sales," but added that EA had already set conservative estimates for Battlefront. Chris Morris, writing for Fortune, expects the popularity of Star Wars to outweigh the issue and make the game a holiday success.

"With a franchise like Star Wars and the legacy of this gaming series, the complaints of core players are likely to be harder to hear over the mass market audience that's buying the game this holiday season."

But there's one player who won't be part of those holiday sales figures: Hiebert. After his post and the uproar from the community, he says he asked for and received a refund on his pre-order of Star Wars Battlefront II. Other gamers online said they would also be canceling their pre-order. Hiebert says he's unlikely to purchase an EA game any time soon.

"Star Wars Battlefront II was the only game I was looking forward to from them," he says, "and unfortunately the experience was destroyed by greed. Hopefully this will become the first stepping stone towards developers thinking twice before coming after our wallets."

Star Wars Battlefront II will be available for PlayStation 4, Xbox One and Microsoft Windows.