Accessibility links
Trump Keeps Elephant Trophy Import Ban In Place, For Now : The Two-Way The U.S. Fish and Wildlife Service initially lifted a ban on importing trophies of elephants from Zimbabwe and Zambia. But on Friday, President Trump said he wants more time to consider it. 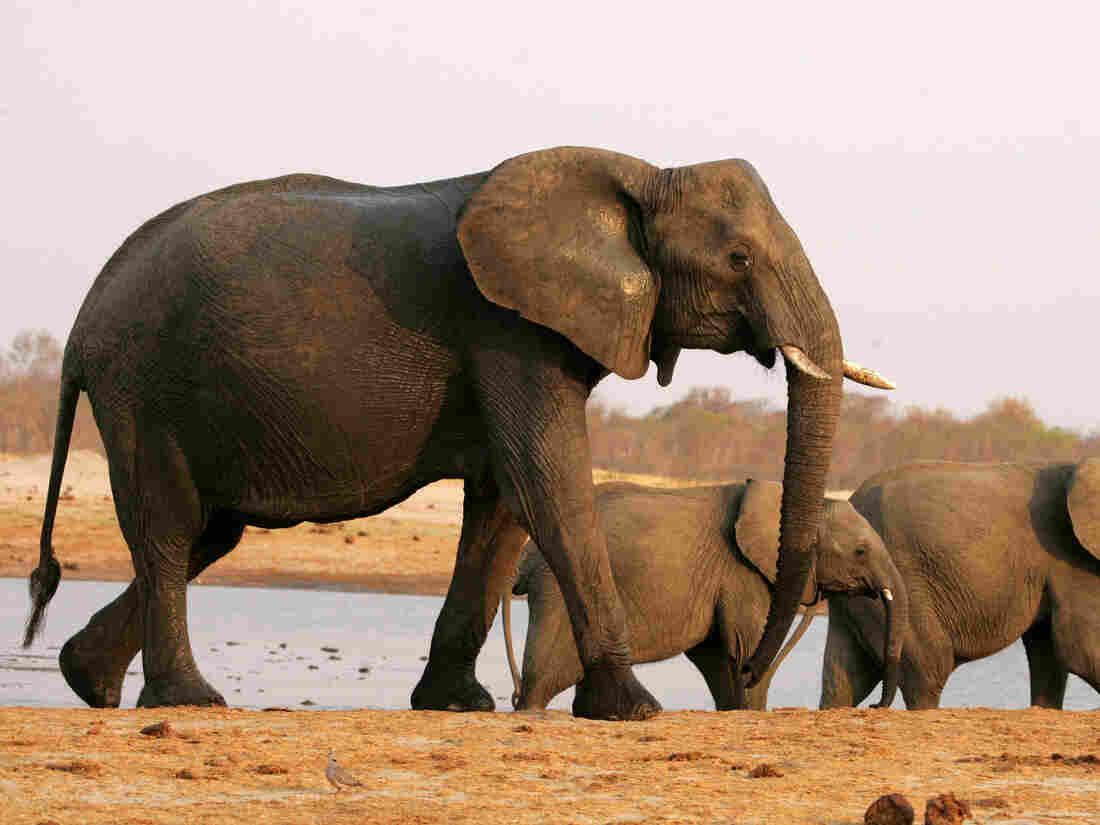 The U.S. Fish and Wildlife Service lifted a ban on importing sport-hunted trophies of elephants from Zimbabwe and Zambia. But President Trump wants to review the decision. Jekesai Njikizana/AFP/Getty Images hide caption 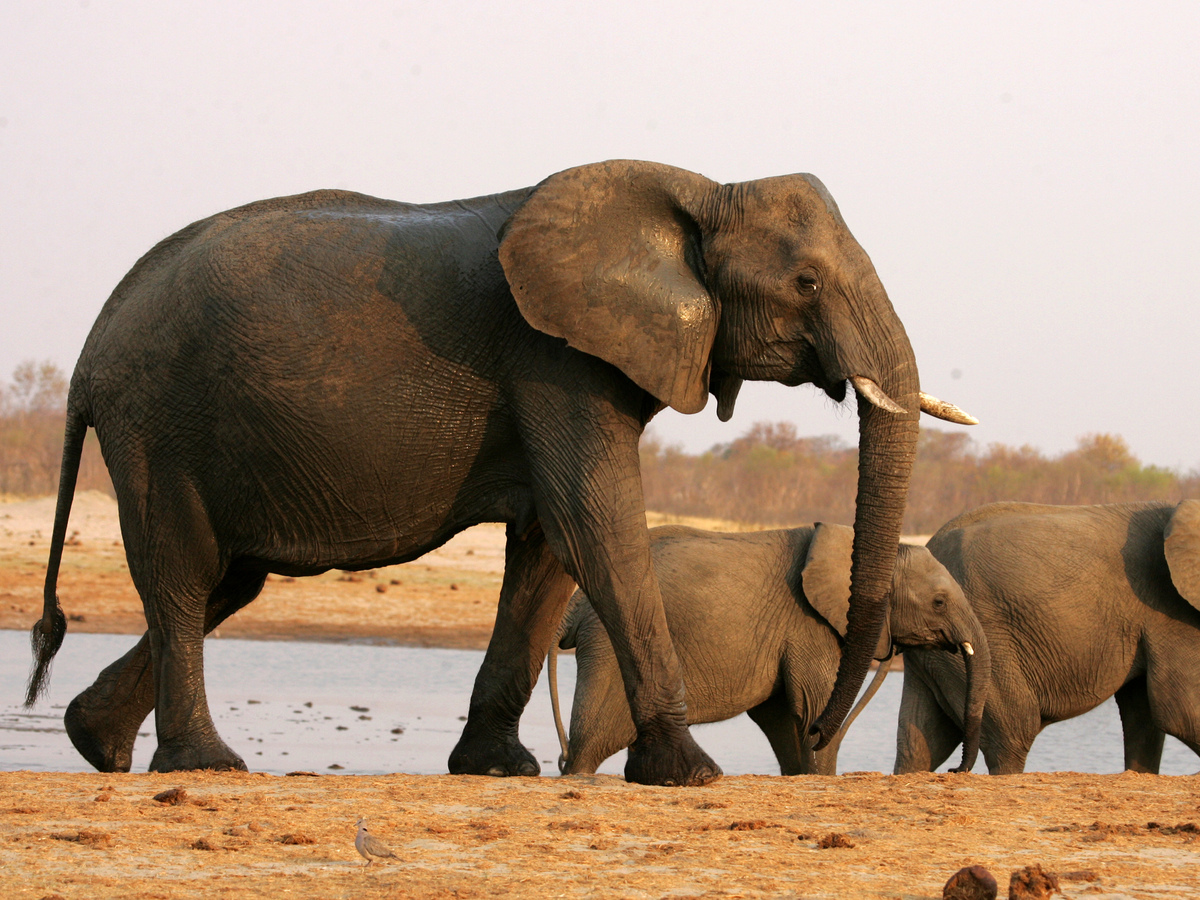 The U.S. Fish and Wildlife Service lifted a ban on importing sport-hunted trophies of elephants from Zimbabwe and Zambia. But President Trump wants to review the decision.

The U.S. Fish and Wildlife Service announced Thursday that it had lifted an Obama-era ban on importing sport-hunted trophies of elephants from Zimbabwe and Zambia. But Friday evening, President Trump seemed to say that decision was being reconsidered, tweeting that he would review "all conservation facts" and issue an update "soon" with Interior Secretary Ryan Zinke.

Zinke later issued a statement, saying: "President Trump and I have talked and both believe that conservation and healthy herds are critical. As a result, in a manner compliant with all applicable laws, rules, and regulations, the issuing of permits is being put on hold as the decision is being reviewed."

The Washington Post has reported on big-game hunting by the president's sons.

"Legal, well-regulated sport hunting as part of a sound management program can benefit certain species by providing incentives to local communities to conserve those species and by putting much-needed revenue back into conservation," the service said in a statement to NPR. "The U.S. Fish and Wildlife Service has determined that the hunting and management programs for African elephants in Zimbabwe and Zambia will enhance the survival of the species in the wild."

It's not clear exactly what persuaded the service to make the change. In a document that was published in the Federal Register on Friday, the service says that Zimbabwe has "stepped up its anti-poaching efforts" and now has "a more systematic, scientific approach" to establishing limits on elephants that can be hunted. It said the Zimbabwean government was increasingly supporting local conservation efforts.

Nothing in the government's documentation addresses Zambia. Asked by NPR for further information about the decision to allow trophy imports from that country, FWS spokesman Gavin Shire wrote that there was "[n]othing other than the finding itself."

Safari Club International, a hunting advocacy group, was apparently the first to get news of the policy change, and it cheered the development in a blog post Tuesday. The group, along with the National Rifle Association, has been fighting the Zimbabwe ban in court ever since it was announced in 2014.

"These positive findings for Zimbabwe and Zambia demonstrate that the Fish and Wildlife Service recognizes that hunting is beneficial to wildlife and that these range countries know how to manage their elephant populations," SCI President Paul Babaz said in a statement.

But others argue that Zimbabwe has not proved it has an effective elephant management plan. The Great Elephant Census found Zimbabwe's elephant population had decreased 6 percent in recent years. In the country's Sebungwe region, elephant populations were down 74 percent.

The study found that in Zambia, there were "substantial declines along the Zambezi River," but the population was otherwise stable.

The Humane Society of the United States came out strongly against the policy change and said a number of problems remain with Zimbabwe's elephant management plan, including poaching, corruption and a lack of government support.

"Let's be clear: elephants are on the list of threatened species; the global community has rallied to stem the ivory trade; and now, the U.S. government is giving American trophy hunters the green light to kill them," wrote Wayne Pacelle, the organization's president and CEO, before the president's tweet.

"What kind of message does it send to say to the world that poor Africans who are struggling to survive cannot kill elephants in order to use or sell their parts to make a living, but that it's just fine for rich Americans to slay the beasts for their tusks to keep as trophies?" he added.

After the president said he would reconsider lifting the ban, Pacelle tweeted that he was grateful to Trump and that "This is the kind of trade we don't need."

Apparently some hunters have elephant trophies waiting for them in Zimbabwe and Zambia. "Individuals who have hunted or wish to hunt elephants during that period will need to apply for and obtain import permits from the FWS in order to bring their elephants home," Safari Club International said in its post, adding that elephants from Zambia will require extra documentation.

The parts of the elephant that hunters choose to import as a trophy can vary.

"Generally, the tusks are," SCI Director of Communications Steve Comus told NPR in an email. "In some occasions, the skull might be (could even be skull with tusks). And, there are other parts imported sometimes, as well. What happens is that all of the meat, etc. is consumed by local people there in Africa (typically a village close to where the elephant is harvested). So, most of the elephant not only remains in Africa, but in the stomachs of local Africans."

The announcement comes amid major political changes in Zimbabwe. Earlier this week, President Robert Mugabe was pushed aside by his country's military. He had been in power since the 1980s.