Accessibility links
Russia Is Suspected Source Of Radioactive Cloud Over Europe : The Two-Way Western scientists say they may never know the source of the cloud of ruthenium-106 that hovered over Europe last month. But what little data there is suggests a research facility inside Russia. 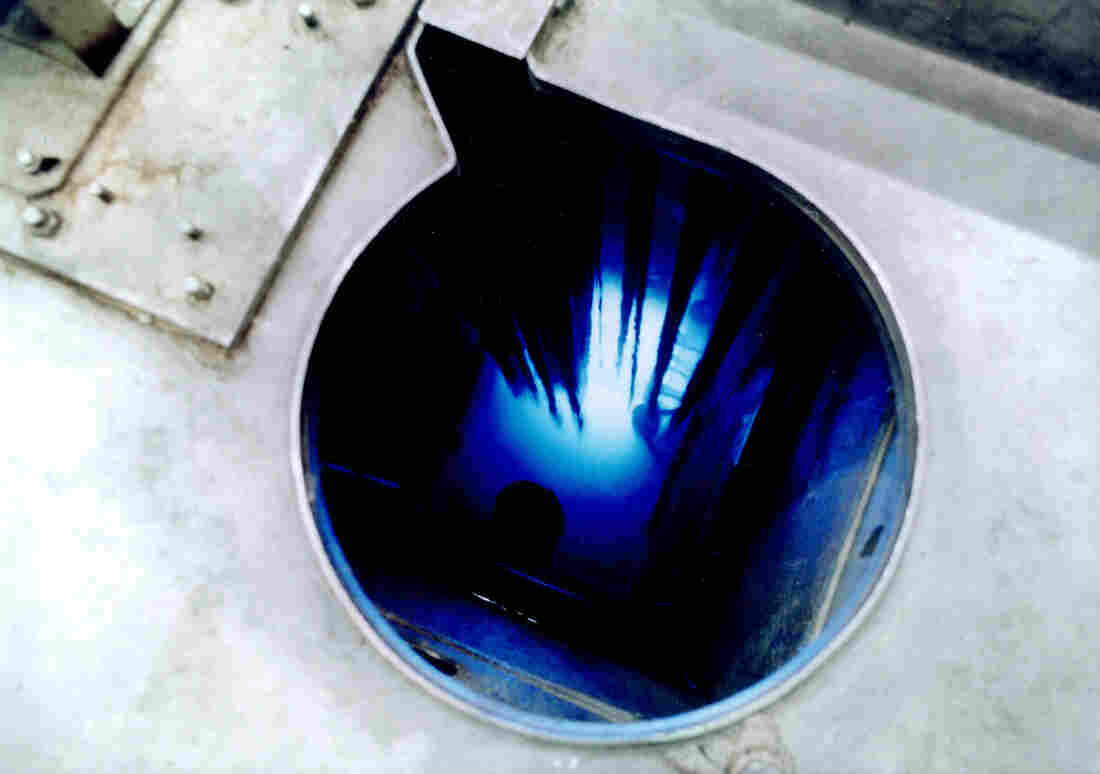 The core of the RBT-3 reactor at the Research Institute of Atomic Reactors in Dimitrovgrad, Russia. Some scientists suspect the institute's work on medical isotopes might explain radioactivity detected over Europe. Sovfoto/UIG via Getty Images hide caption 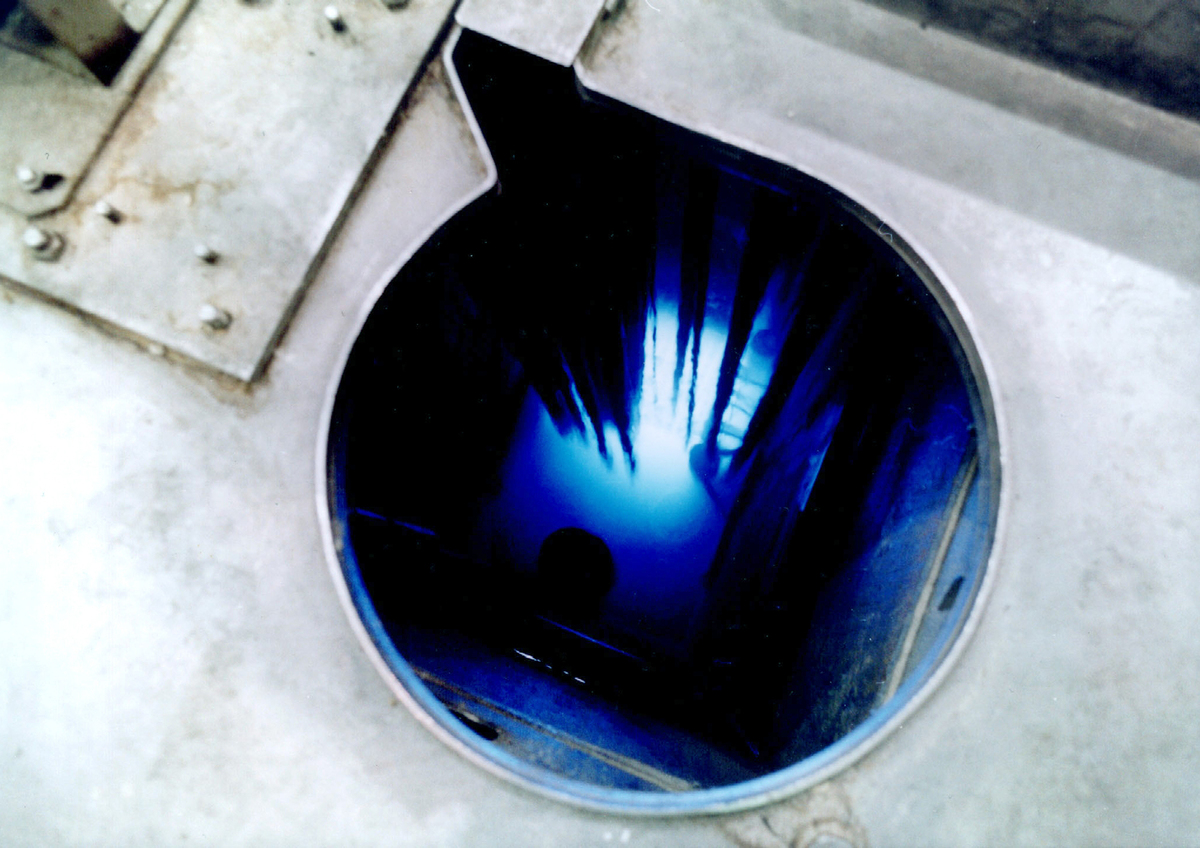 The core of the RBT-3 reactor at the Research Institute of Atomic Reactors in Dimitrovgrad, Russia. Some scientists suspect the institute's work on medical isotopes might explain radioactivity detected over Europe.

The tiny nation of Denmark has just three stations for monitoring atmospheric radiation. Each week, scientists change out air filters in the detectors and take the used ones to a technical university near Copenhagen.

There, Sven Poul Nielsen and other researchers analyze the filters. They often snag small amounts of naturally occurring radioactivity, radon for example.

Then about a month ago, Nielsen was startled to find something far stranger: a radioactive isotope known as ruthenium-106.

Ruthenium-106 has a half-life of just one year, which means that it isn't naturally found on Earth. It is, however, created in the glowing cores of nuclear reactors — and usually only detected in the atmosphere when something goes terribly wrong.

The ruthenium was detected far beyond Denmark. It showed up all across Europe, from Cyprus to Spain. The levels seen in dozens of nations were far too low to pose a health risk. Within weeks, the thin cloud had vanished.

So far, no nation has announced a recent nuclear incident or accident involving ruthenium-106. But some Western scientists say they suspect the source might have been a Russian research institute near the city of Dimitrovgrad, west of the Ural Mountains. The reason for their suspicion comes down to atmospheric calculations and the type of work being done at the facility, known as the Research Institute of Atomic Reactors.

Asked about activity at RIAR in the past six months, spokeswoman Anna Volkova told NPR by email that no incidents had occurred at the facility and that "ruthenium was not produced in that period." Russian atomic energy officials have previously said there has been nothing unusual detected at any of their nation's nuclear facilities.

Nielsen acknowledges that the theory of a Russian origin is an educated guess. "We don't know for sure," he says. But in the absence of more information, this is perhaps the most complete explanation for the radioactive haze he picked up in his filters.

A map from French authorities suggests that the release came from the east, near the border of Russia and Kazakhstan. IRSN hide caption

A map from French authorities suggests that the release came from the east, near the border of Russia and Kazakhstan.

Ruthenium-106 has been detected in the atmosphere before. After the Chernobyl nuclear disaster in 1986, the isotope was a part of the radioactive soot that blanketed Europe. The Chernobyl meltdown happened inside the secretive Soviet Union, and some of the first signs there had been an accident were the detection of ruthenium along with other radioactive isotopes.

This time is different. Starting in late September, detectors throughout Europe began picking up trace amounts of ruthenium — but they didn't pick up other radioactive elements associated with a nuclear power accident.

To see ruthenium-106 without the other isotopes seen inside a reactor suggests that it might have been isolated chemically.

There is one very particular process that makes ruthenium-106, says Kenneth Czerwinski, a radiochemist at the University of Nevada, Las Vegas. Ruthenium-106 is created as a byproduct during the production of a medical isotope known as molybdenum-99.

The world needs molybdenum-99. It's an important ingredient used in some medical scans of the heart and other organs. But very few locations actually make it. "There aren't many facilities," Czerwinski says. "There are some reactors in Canada, Belgium, South Africa, Australia."

And in Russia. In 2013, the state atomic energy corporation ROSATOM announced that RIAR in Dimitrovgrad had successfully begun producing and purifying molybdenum-99. There is a global shortage of the isotope, and Russia has ambitions of becoming a supplier to hospitals all over the world. According to a report by the U.S. National Academies of Sciences, Engineering, and Medicine, it eventually hopes to snag a 20 percent share of the international market.

To meet Russia's ambitions, RIAR researchers must learn how to make molybdenum-99 according to international standards. It's conceivable they might have made a mistake in that process and released some ruthenium, says Thomas Ruth, an emeritus nuclear chemist at TRIUMF, in British Columbia, Canada. "There is a learning curve," he says.

But Ruth isn't certain that RIAR was the source. He thinks that other radioactive isotopes might be present if such an accident had occurred. For that reason he thinks an accident involving old nuclear fuel, perhaps at another facility, might be to blame.

The second clue pointing to Dimotrovgrad has to do with where the ruthenium was found. According to the International Atomic Energy Agency, 43 nations reported detecting ruthenium-106. Scientists with various governments have collected that data, along with weather information, to try to work backward and find the cloud's origin.

A French analysis released last week suggested the most likely region for the release was somewhere in between the Volga River and the southern Ural Mountains, the precise region where Dimitrovgrad is located. A German statement also pointed to the southern Urals, though it said other areas in the south of Russia could also be candidates.

Scientists speak in probabilities, and none are prepared to say they know what happened for sure. But many now believe the Research Institute of Atomic Reactors is the "obvious candidate," Nielsen says. "That institute has a number of reactors that do interesting things including isotope production," Czerwinski agrees.

That being said, RIAR isn't the only nuclear facility in the region. This stretch of Russia is dotted with nuclear facilities. Among them is the Mayak Production Association, once a major nuclear weapons plant that now does things like recycling vast quantities of old nuclear fuel. Mayak has had a spotty safety record over the decades.

In the end, it's educated speculation. The IAEA has issued a brief statement saying that all member states that detected the ruthenium have also said there were no nuclear incidents in their territory, including in Russia.

Russia's ROSATOM did not respond to NPR's inquiry, but it issued a statement on Oct. 11 broadly calling the Russian-origin theory untenable. The organization cited radiation monitoring that had showed no ruthenium-106 over Russia itself, except in minute quantities over St. Petersburg.

Without confirmation of an incident or accident, Nielsen says the true story may never be known. "We're waiting for somebody to step forward and say, 'Yes, we did it.' "