Accessibility links
Women Of Atenco Testify Against Mexican Police For Sexual Torture : The Two-Way In 2006, police sexually abused and beat women following a confrontation between protesters and state forces. Eleven years later, the Women of Atenco have taken the case to an international court. 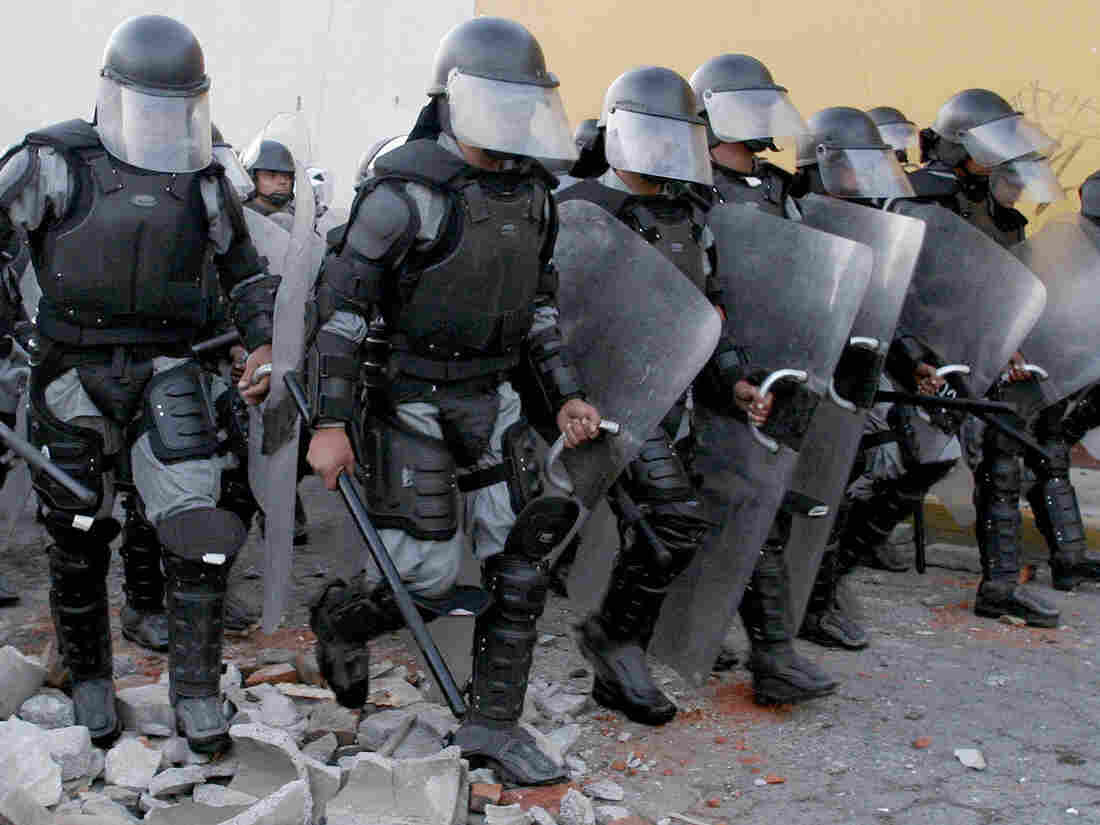 Policemen charge on protesters in San Salvador Atenco, Mexico, in May 2006, in efforts to reestablish order in the city. Two people died and many were abused in the battle that broke out when police attempted to remove peddlers from the city and neighboring Texcoco. Alfredo Estrella/AFP/Getty Images hide caption 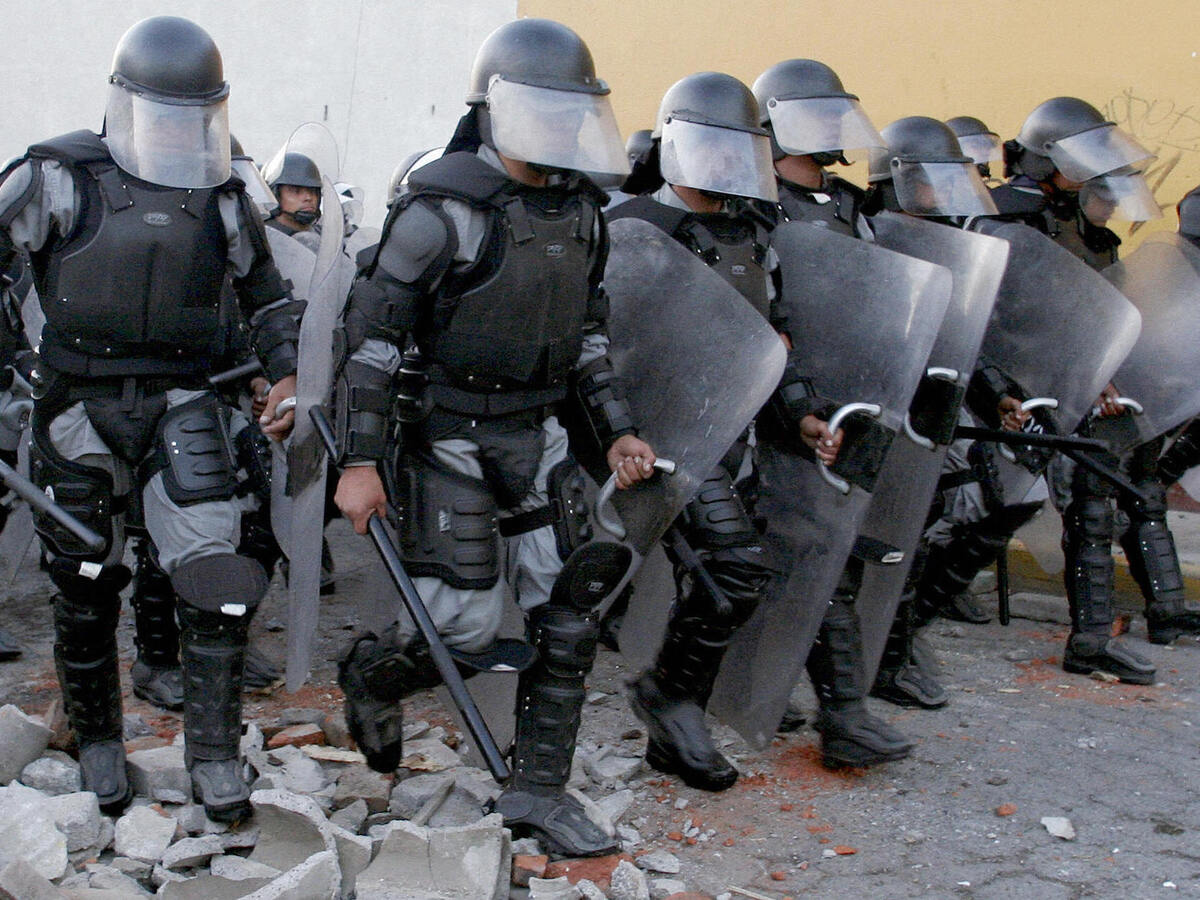 Policemen charge on protesters in San Salvador Atenco, Mexico, in May 2006, in efforts to reestablish order in the city. Two people died and many were abused in the battle that broke out when police attempted to remove peddlers from the city and neighboring Texcoco.

On Thursday and Friday, five women testified before the Inter-American Court for Human Rights and demanded an investigation regarding sexual torture at the hands of Mexican police forces. The abuse happened in May 2006 following a clash between protesters and state forces in the state of Mexico.

There are 11 women involved in the case, seeking justice for abuse they suffered in the towns of San Salvador Atenco and Texcoco. During the police crackdown on demonstrators, ordered by then-governor, and current president, Enrique Peña Nieto, two people were killed and many were injured. The women say they were beaten, tortured and raped following the confrontation.

During the court proceedings, which were posted online, the Mexican government said the state recognized the abuse and accepted responsibility in 2013, offering monetary reparations to the women. The "Women of Atenco," as they are called, refused the offer, saying they wanted those responsible to be held accountable instead. To date, no one has been held accountable for the violence.

As Norma Aidé Jiménez Osorio took the stand, her anger was visible and almost infectious. Armed with a conviction for justice, she began testifying to the Costa Rica-based court. She explained how she was beaten and abused by the officials.

"Some police, I am not sure how many — I think there were more than three — began attacking me," Jimenez Osorio said. She described in detail how the officers sexually abused her.

"When they finished, they invited the others to do the same," she said.

On May 3, 2006, police prevented a group of flower vendors from selling at a market in Texcoco. According to Narco News, the vendors belonged to the People's Front in Defense of the Land (FPDT), and were violently attacked by police forces. 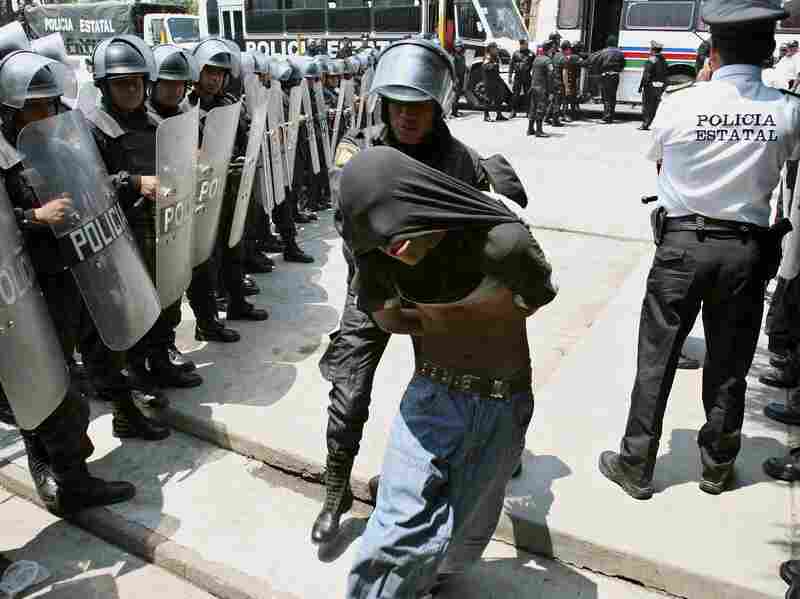 A protester who clashed with state riot police in the town of San Salvador Atenco is taken into the Santiaguito prison in Almoloya de Juarez, Mexico in 2006. Hundreds of police fired tear gas and pushed through human barricades to take control of the town. Mario Vazquez De La Torre/AP hide caption 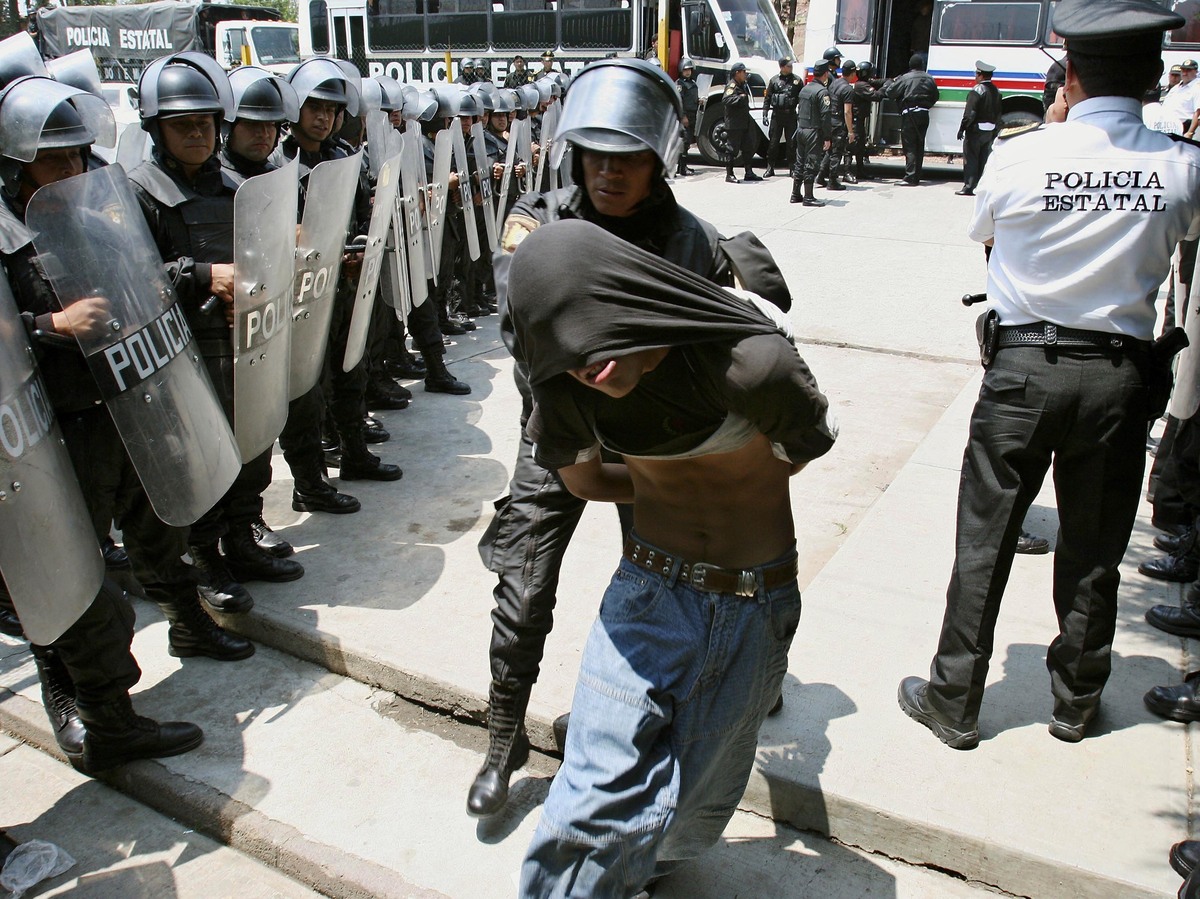 A protester who clashed with state riot police in the town of San Salvador Atenco is taken into the Santiaguito prison in Almoloya de Juarez, Mexico in 2006. Hundreds of police fired tear gas and pushed through human barricades to take control of the town.

In response, demonstrators took over the town square of San Salvador Atenco in the state of Mexico, The New York Times reports. Current Mexican President Peña Nieto was governor of the state at the time and ordered state police to quell the protests, leading to a two-day clash where many were injured and two were killed, including a 14-year-old boy.

As the confrontation escalated, people from all over the country arrived to join the protest, including Jimenez Osorio, arriving from Mexico City. She was 23 years old, studying plastic arts and says she went to the town in a "grand act of solidarity."

State and federal police arrested more than 200 people following the two-day ordeal, El País reports. According to a press release by the legal organization representing the women, 47 women said they were sexually abused by police.

This was not the first time a confrontation happened in San Salvador Atenco. As NPR reported in 2002, townspeople led by the FPDT resisted the construction of an airport in a vicious fight.

The five Women of Atenco who presented their harrowing testimonies to the court said the aftermath of the abuse was also horrific. They were incarcerated, with two of the women spending two years behind bars. According to their testimonies, they were called "liars" by the government when they attempted to report the abuse.

Jimenez Osorio said she tried to return to her art after being released from jail but was unable to do so because of the pain in her hands. During her arrest, officials had broken her fingers with a baton; the pain she experiences when creating art reminds her of the beatings and sexual abuse.

"And the surviving victims have had to rebuild themselves, alone. But we cannot forget the state was responsible. It is important to sanction everyone responsible for these events. We are not requesting anything extraordinary. We are looking for the truth, we are looking for justice. And we want certainty that this will not be repeated. After all the pain we've been forced to live with, this is the minimum they could do."

In a press release from the Mexican government, they said the state has taken "diverse actions of a structural character to repair the pain and evade the repetition of similar acts."

In a report by Reuters, the news agency said a final ruling on the case could take months.