Accessibility links
Oversight Groups Have Repeatedly Identified Flaws In Military Crime Reporting : The Two-Way The Air Force failed to report the Texas shooter's criminal history to the FBI, which would have blocked his gun purchases. But concerns over military crime reporting have been raised for years. 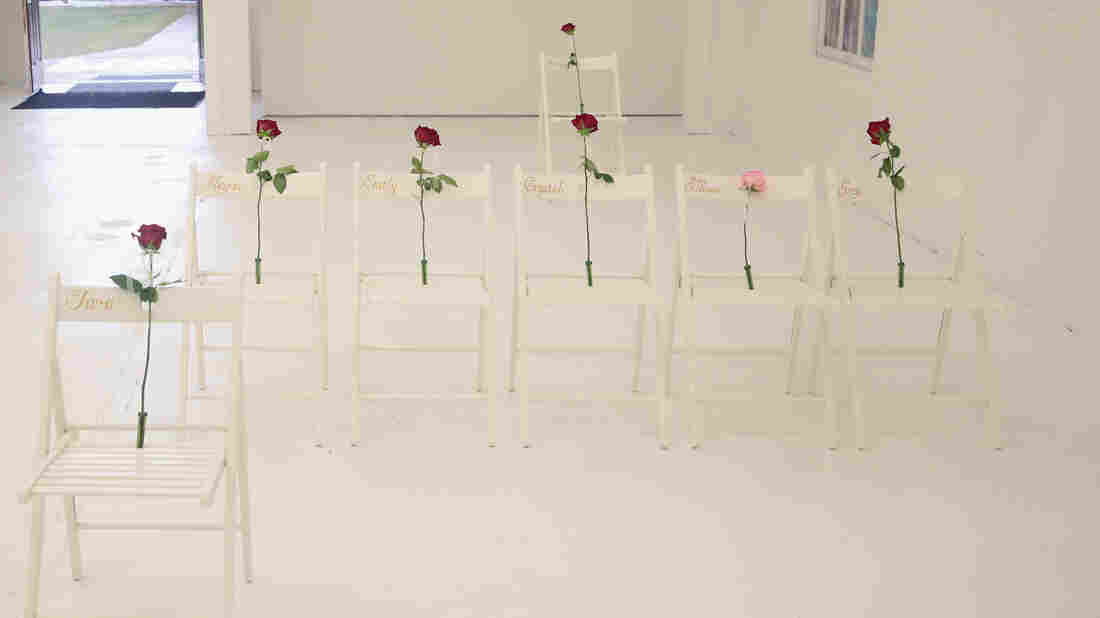 The First Baptist Church of Sutherland Springs, shown on Nov. 12, was turned into a memorial to honor those who died on Nov. 5. Devin Patrick Kelley shot and killed 26 people and wounded 20 others when he opened fire during Sunday service at the church in Sutherland Springs, Texas. Scott Olson/Getty Images hide caption 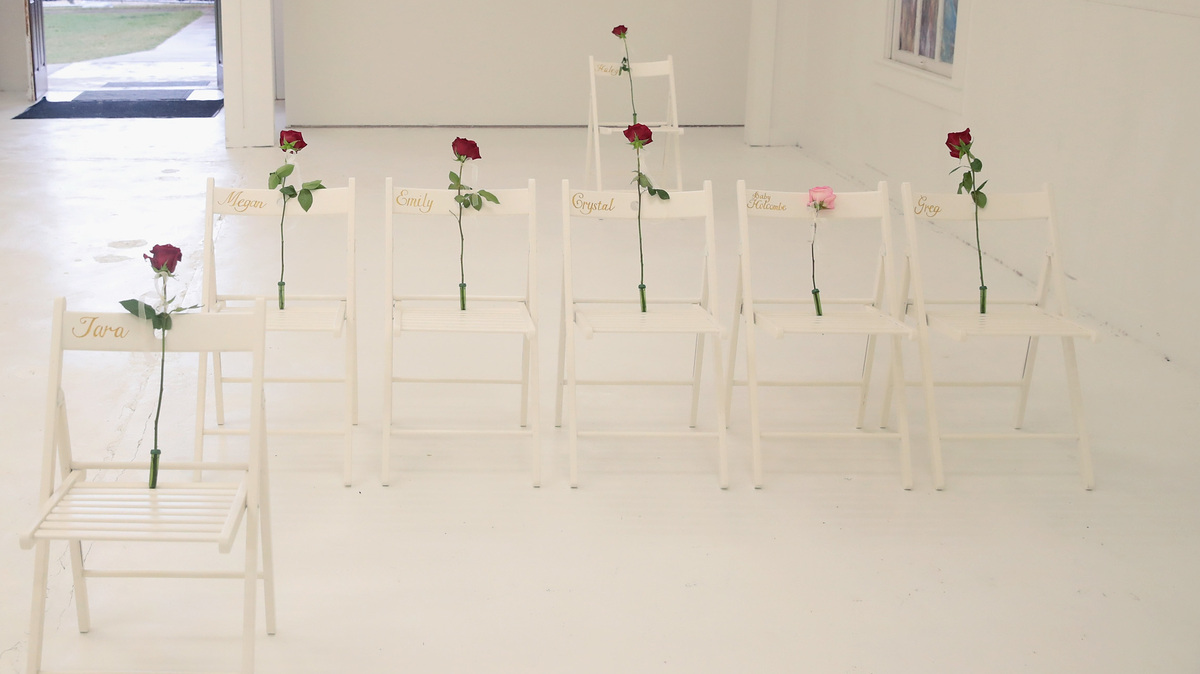 The First Baptist Church of Sutherland Springs, shown on Nov. 12, was turned into a memorial to honor those who died on Nov. 5. Devin Patrick Kelley shot and killed 26 people and wounded 20 others when he opened fire during Sunday service at the church in Sutherland Springs, Texas.

In 2012, after Devin P. Kelley was convicted of domestic violence by a military court, Holloman Air Force Base failed to input that conviction into a federal database used for gun-purchase background checks.

The oversight enabled Kelley to buy multiple weapons from licensed gun dealers, which the ATF says were found at the scene after he killed 26 people at a Texas church.

The U.S. military has broad, longstanding problems sharing criminal records with the FBI. The Department of Defense is required to share data with the FBI under federal law, but, as the Kelley case lays bare, the fact that it's mandatory doesn't mean it actually happens.

Nicholas Johnson, a law professor at Fordham University who specializes in gun laws, says that's an issue with regulatory compliance in general. He compares it to environmental regulations that are violated with no consequence until someone files a lawsuit.

"It's a 'who's watching the watchers' kind of issue," he says. "There's no oversight over the Air Force or over the FBI that demands that these regulatory obligations are actually followed through with."

An Obligation To Report

Under federal law, it's illegal for anyone convicted of a crime punishable by more than a year in prison to buy or possess a gun. The same is true for anyone who is convicted of a domestic violence offense or who falls in several other disqualifying categories.

When someone attempts to buy a gun from a federally licensed gun dealer, the dealer must run a background check using the National Instant Criminal Background Check System, or NICS, to make sure the person is not disqualified under the law.

NICS background checks have blocked well over a million gun sales, but the system is far from iron-clad. If a background check is not completed within three days, the sale proceeds. Private sellers, like those at gun shows, are not required to run background checks, so a person denied by a licensed seller can still acquire a weapon through other means — even without resorting to theft.

Research Suggests Gun Background Checks Work, But They're Not Everything

And even if a background check is run, it's only as good as the information that's actually reported to NICS, which relies on three separate databases. States are not required by federal law to report that data, and some states don't fully participate, as NPR reported in 2012. The reporting is mandatory for the military and other federal agencies — and the requirement was strengthened by Congress in 2007, after the Virginia Tech mass shooting, to include regular compliance reports.

Several other federal laws also require the Department of Defense to supply crime data to the FBI, for annual crime statistics reports and victims' rights programs.

The inspector general's office at the Department of Defense has occasionally examined the military's general crime-reporting practices and found them wanting.

In 2015, the inspector general issued a report looking at convictions within the Navy, Air Force and Marine Corps. Out of 1,102 convictions, 28 percent of them did not have fingerprints submitted to the FBI.

Without fingerprints, a criminal record cannot be included in the Interstate Identification Index, or III, which is one of the three databases used in NICS background searches, a spokesman for the FBI's Criminal Justice Information Services Division confirms to NPR. The second database which tracks things like fugitives and people under protection orders, isn't meant to collect criminal conviction records.

Hypothetically, those missing records could still make into the third database, which is specifically designed to make sure people who shouldn't own guns don't fall through the cracks in the system. But based on available records, they didn't.

The military has entered exactly one serious crime conviction and one domestic violence conviction as of July 2016 into that database. That's not an annual figure — that's out of all 15 million active records.

These problems are very old. As The Associated Press has reported, two decades ago, the inspector general found that the Army and Navy failed to submit fingerprints to the FBI in more than 80 percent of cases. In the Navy, the outcome of criminal cases went unreported to the bureau 94 percent of the time.

An Array Of Agencies, Acting Alone

The Department of Defense and the FBI both tell NPR that they cannot share the total number of military criminal records currently uploaded to the FBI's III database. The FBI says the data is "not readily available." The Department of Defense says there's no centralized record because each military law enforcement agency, of which there are many, handles those reports individually.

The military does have a centralized reporting system, called DIBRS, that's intended to handle criminal reporting to the FBI — including data supplied for gun-purchase background checks, according to DoD documentation.

But the system is not actually being used for that purpose, according to a spokesman for the Office of the Secretary of Defense.

Previous analyses of DIBRS have found it inadequate and error-ridden. For instance, the system is supposed to track domestic violence incidents, as the military is required by law to do. But in 2010, the last time the Government Accountability Office assessed the military's tracking efforts, the official in charge of DIBRS refused to share the system's domestic violence data, saying it was too unreliable to be shared.

A 2014 report from the DoD inspector general discovered that for 10 years, data in DIBRS was simply not being provided to the FBI even for statistical tracking purposes. The FBI hadn't certified DIBRS to contribute data, because the military's records had so many known mistakes — for instance, according to the report, the Navy said it did not have the "time, money or resources" to correct erroneous records, and the Army simply deleted mistakes instead of fixing them, in the name of efficiency.

The system has since been certified for the crime-statistics database, the FBI says. But that only helps with understanding overall crime rates. The criminal records themselves, necessary for NICS background searches, continue to be reported to the FBI on an ad hoc basis through a process that varies by agency.

Given the complexity of the processes involved, and the lack of publicly available data, it's hard to tell precisely how widespread the military's reporting lapses are. But more answers might be on their way.

The Air Force is conducting a review into what went wrong with Devin Kelley's case, and what other records might be affected by similar problems. The service has asked the Department of Defense Inspector General to look at the issue across the entire military system.

Efforts are already underway to strengthen the reporting system. Records submitted to Congress show that the Department of Defense, along with other federal agencies, has already written an "implementation plan" to improve its criminal reporting.

And more recently, a bipartisan group of senators has introduced a bill designed to strengthen the background check process. Among other things, the measure would penalize federal agencies that fail to report records.