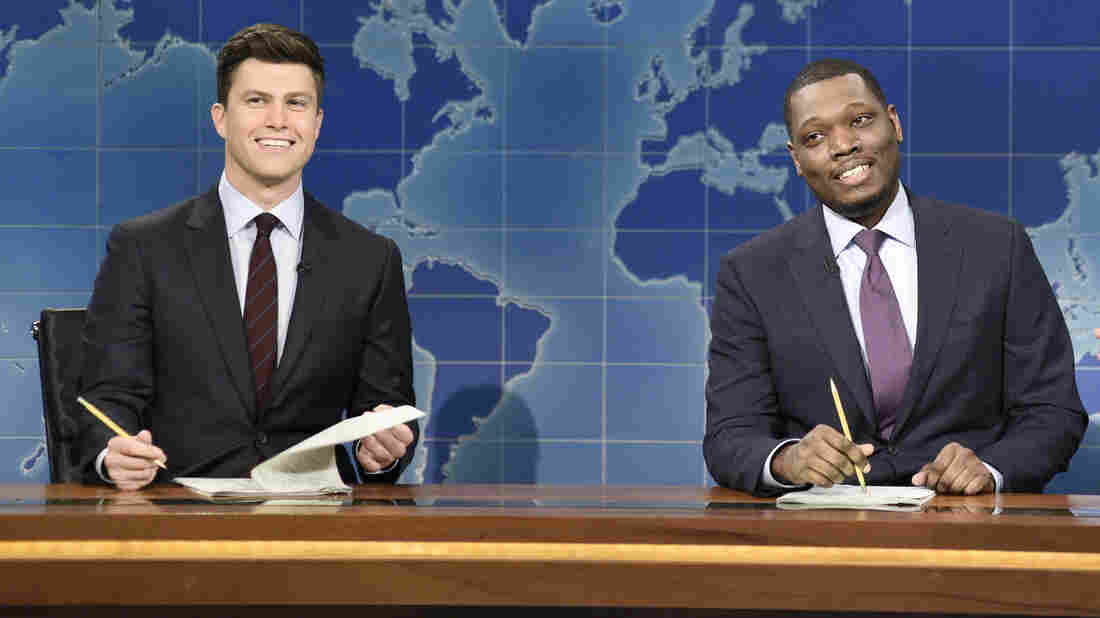 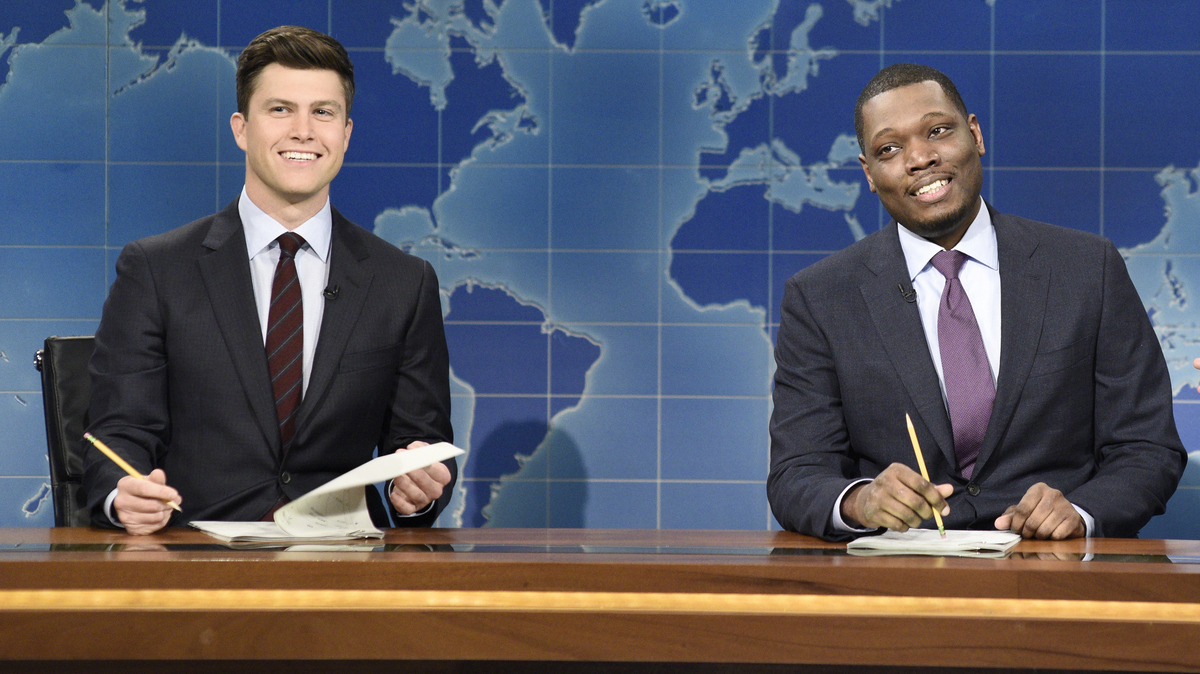 The ongoing spate of sexual misconduct accusations leveled against powerful men the world-over, including at NPR, hit close to home for Saturday Night Live this past week, and the sketch comedy show did not shy away.

On Thursday a Los Angeles radio host accused U.S. Senator Al Franken of "forcibly" kissing her during a 2006 USO tour in the Middle East and released a photo of him appearing to grope her as she slept. The Democrat from Minnesota issued an apology to Leean Tweedy that same day.

Eminem Delivers A Mini-Medley Of Hits On 'Saturday Night Live'

Franken rose to fame as one of the founding writers at SNL in the 1970s and later a performer, yet Weekend Update anchor Colin Jost didn't spare him. With the picture of Franken and Tweeden displayed on-screen, Jost says, "I know this photo looks bad. But, remember, it also is bad."

"And sure, this was taken before Franken ran for public office, but it was also taken after he was a sophomore in high school. It's pretty hard to be like, 'Oh, come on, he didn't know any better. He was only 55.' "

Co-anchor Michael Che also references the fact that President Trump criticized Franken, an opposing party member, while taking a much more measured response to accusations, including of sexual assault, made against U.S. Senate candidate Roy Moore, a Republican.

In his apology, Franken wrote, "I don't know what was in my head when I took that picture, and it doesn't matter. There's no excuse. I look at it now and I feel disgusted with myself. It isn't funny. It's completely inappropriate."

In its opening sketch, SNL riffs off of Monday's news reports that Donald Trump Jr. was in direct contact with Wikileaks at the same time the website, which the intelligence community believes was working with Russia, published hacked emails from the Clinton campaign.

In the SNL scene, Donald Trump Jr., played by Mikey Day and Eric Trump, played by Alex Moffat, meet up with Julian Assange, performed by Kate McKinnon, in a "parking garage beneath the Ecuadorian embassy in London."

"I appreciate you coming all the way to London to meet face-to-face," McKinnon said, Australian accent in full effect. "No worries," Day responds. "As secure and off-the-record as sliding into my Twitter DMs is, I thought this might be safer."

Then Day demands, "I want dirt on Hillary." McKinnon gives him a manila envelope, "Keep that in a safe place, all right?"

"Oh, I will," Day says, sliding the envelope into Moffat's children's backpack depicting a "Minions" character.

McKinnon asks for money in exchange for the information, saying she is not some dumb blond. "But your hair's white," Moffat says.

"It's not white. It's a platinum bob with a man's front wisp," McKinnon says.

In his hosting debut was Chance the Rapper. "I've been here before as a musical guest, but this is the first time I've had to, like, talk and stuff, so we'll see how this goes," he says in his monologue.

"In the spirit of giving, I've pledged to give $1 million to Chicago schools," he says in a true statement.

"The only problem is, I talked to my accountant, and I do not have it," Chance jokes, so in an attempt to raise funds for his donation, he launches into a Thanksgiving-themed song, backed by a choir of turkeys in robes in addition to the SNL cast.

"It's Thanksgiving time, and we're all on one side. Except for the turkeys, who are all going to die," they sing.