Accessibility links
Charles Manson, Cult Leader Of Brutal 1969 Murders, Dies At 83 : The Two-Way The murders of actress Sharon Tate and six other people in a span of two nights gave Manson a unique and infamous position in the American cultural imagination. 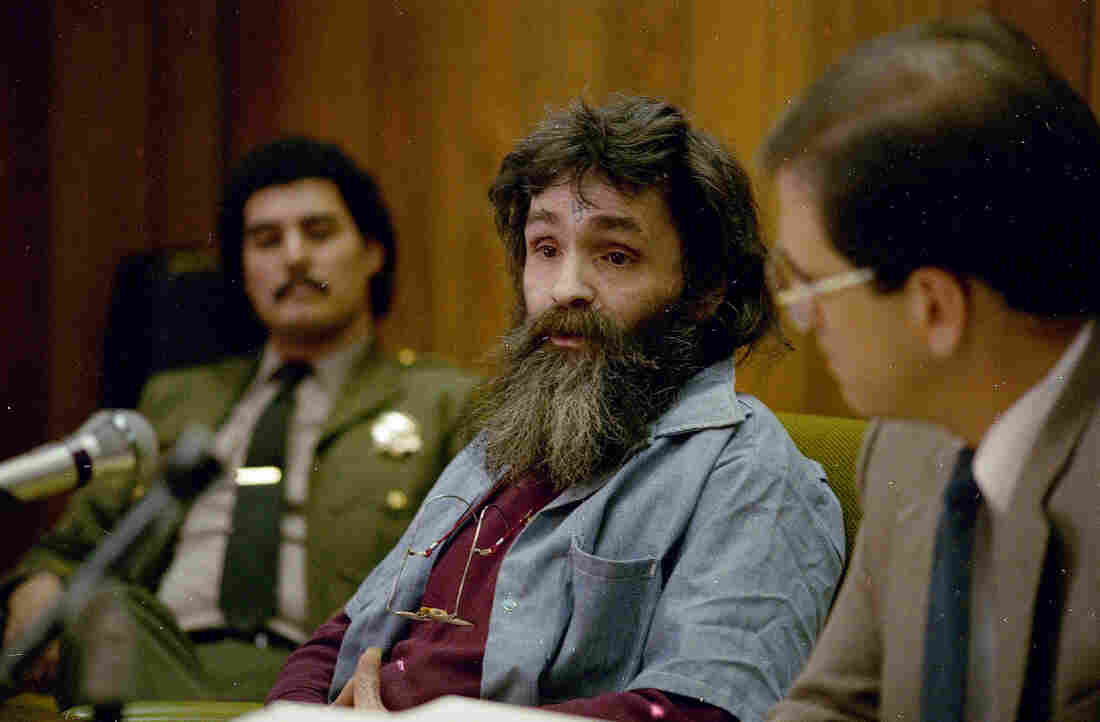 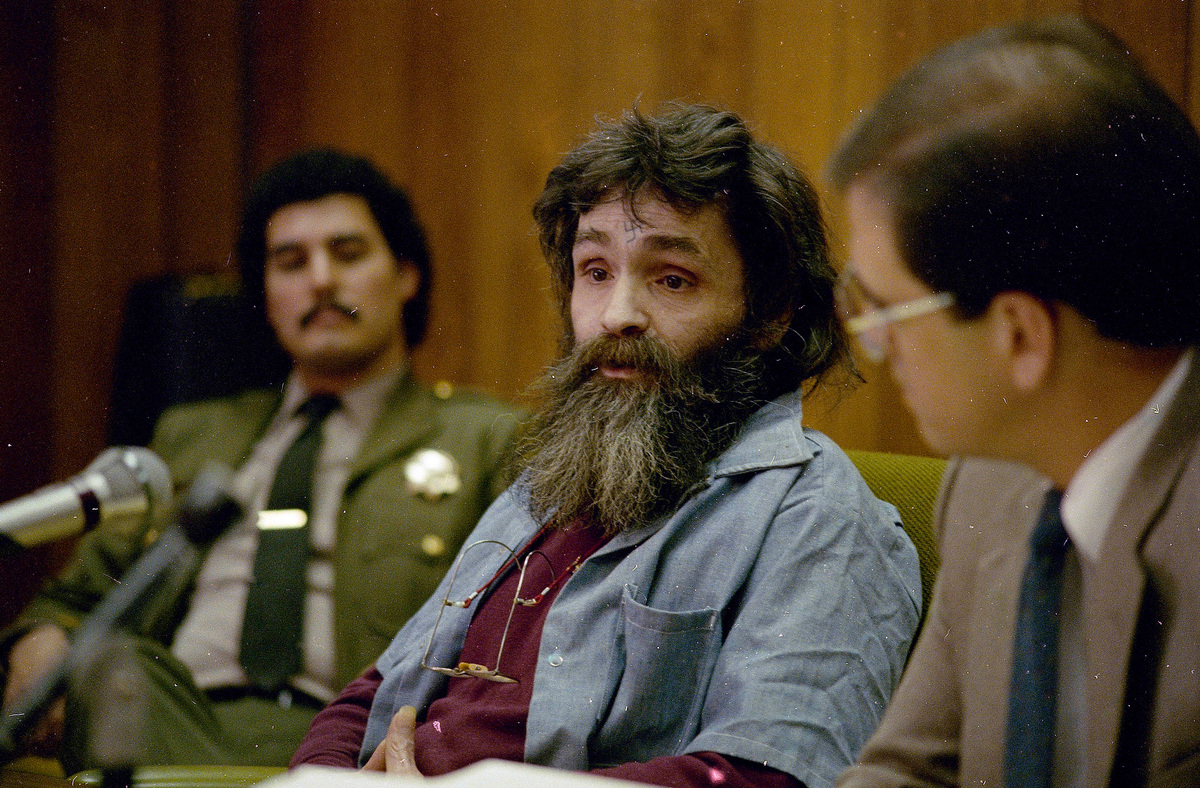 Charles Manson (center), seen during a parole hearing in California in 1986.

Charles Manson, the cult leader who drew lasting infamy for directing mass killings in 1969, has died at the age of 83.

Manson had been removed from prison in Corcoran, Calif., where he had been serving nine life sentences, and placed in a nearby hospital for a serious illness. It was the second time this year the mass murderer had been hospitalized.

For nearly five decades, Manson has occupied a unique position in the American cultural imagination — a figure of dystopian fascination and horrifying malice.

This violent legacy can be traced principally to two late-summer nights in Los Angeles in 1969, when Manson orchestrated a series of gruesome murders. The attacks left seven people dead — including actress Sharon Tate, who was 8 1/2 months pregnant. His followers, a cult known as The Family, beat, shot and stabbed their victims to death, scrawling cryptic messages in blood on the walls.

The murders — and the messages left behind — were intended to incite an apocalyptic race war, after which he and his followers would rise up to lead the surviving world. Instead, Manson and several members of his cult were caught and convicted of first-degree murder — but only after what was one of the longest and most expensive trials in American history.

In the decades that followed, biographers sought to understand the motive for the shocking crime, and to make sense of its place in the tumultuous late 1960s.

As Vincent Bugliosi, Manson's chief prosecutor, explained to NPR in 2009: "The murders were probably the most bizarre in the recorded annals of American crime."

A criminal and a self-proclaimed 'messiah' 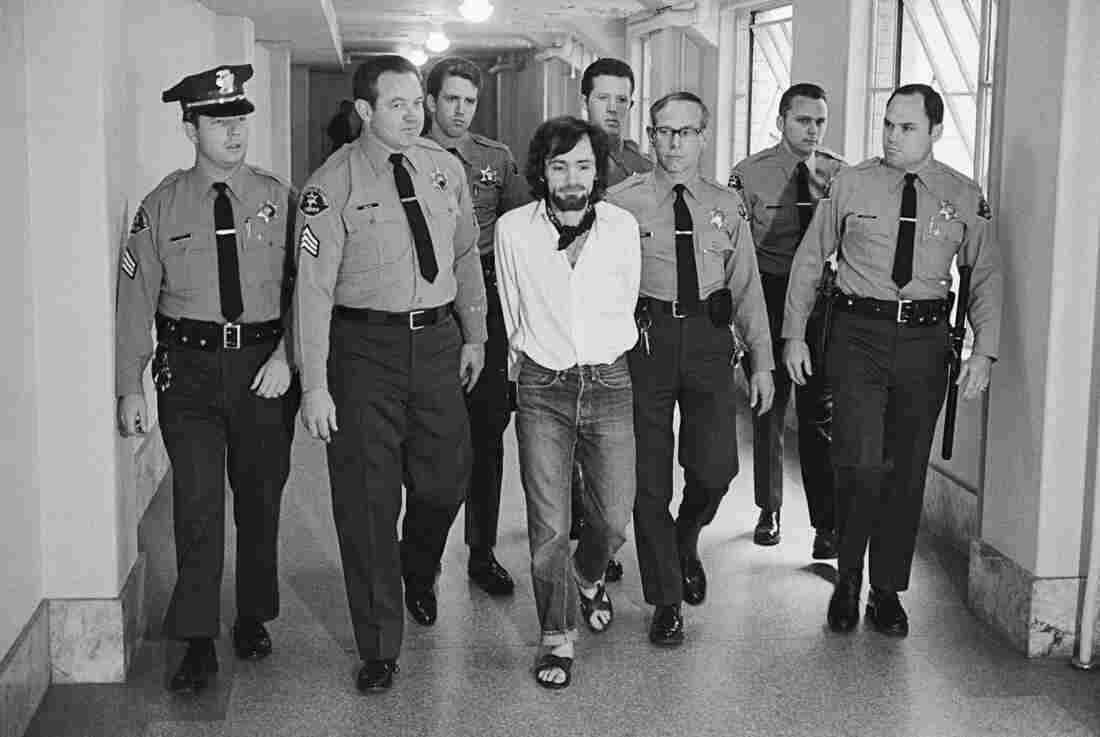 Seven deputies escort Charles Manson from the courtroom after he and three followers were found guilty of seven murders in the Tate-LaBianca slayings. Bettmann Archive/Getty Images hide caption 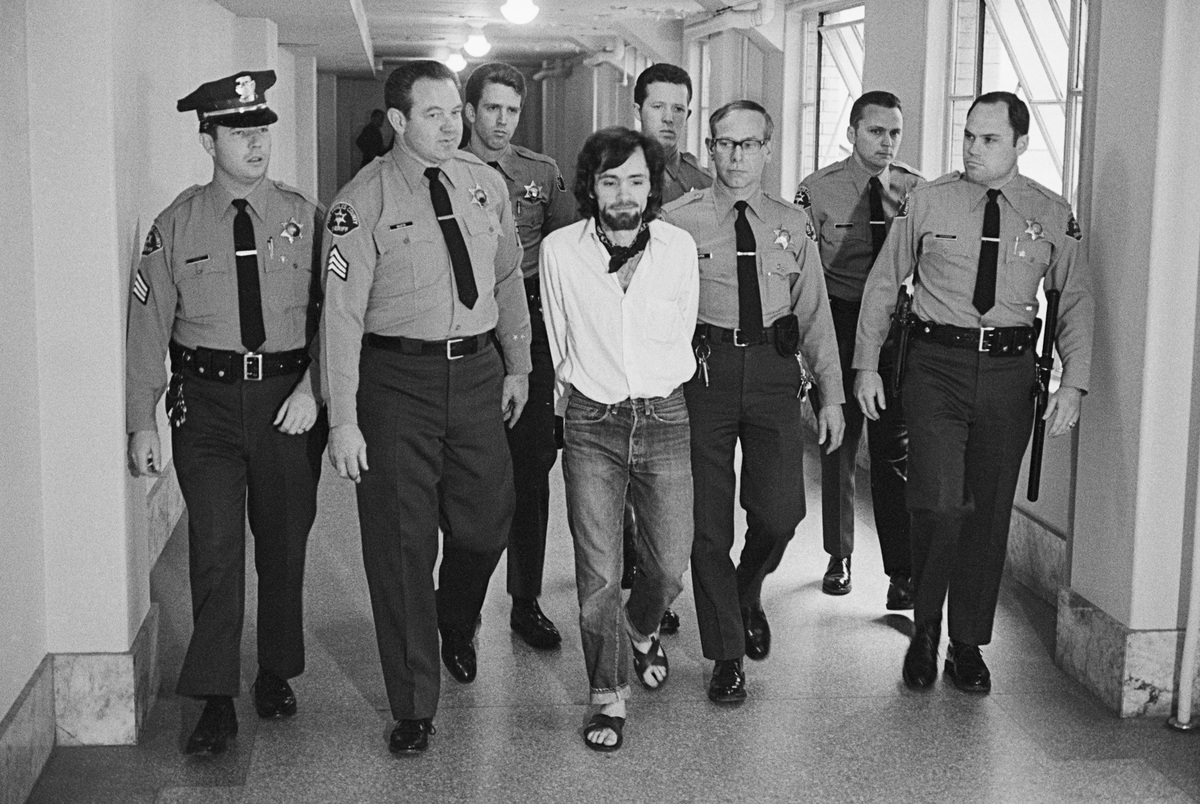 Seven deputies escort Charles Manson from the courtroom after he and three followers were found guilty of seven murders in the Tate-LaBianca slayings.

While Manson didn't come to national attention until the 1969 murders, he was no stranger to crime. In fact, he spent much of his life sliding in and out of prison, his criminal record riddled with convictions ranging from auto theft to forgery and pimping.

Manson was also married twice before the age of 30 and had one child from each marriage — both of them named Charles. Those marriages felt apart amid Manson's regular interval of prison sentences.

While he left school at an early age, Manson professed admiration for the Utopian science fiction of Robert Heinlein's Stranger in a Strange Land. During his time behind bars, he also learned to play the guitar, a skill he would use to draw followers to him.

When he was released from a California prison in 1967, Manson moved to San Francisco, where he began to recruit the first followers who would come to be members of his "family" — mostly young women, many of whom later took part in the 1969 killings.

Biographer Jeff Guinn says that during this time, Manson fed off the free-love culture of the city, especially in the neighborhood of Haight-Ashbury. 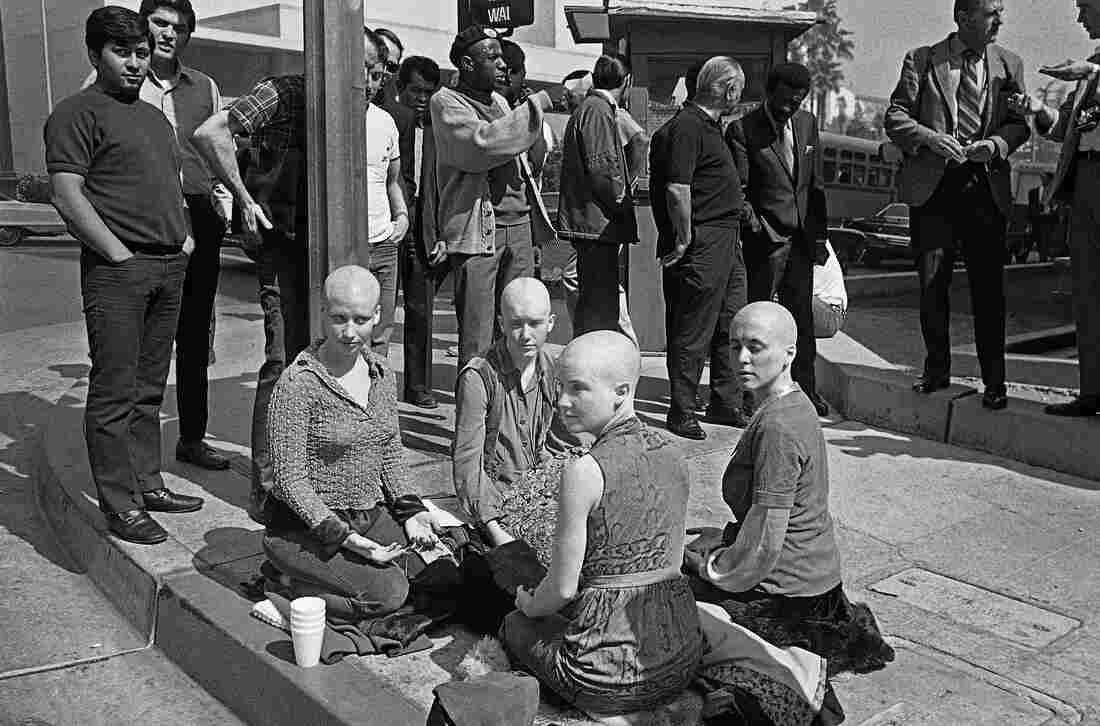 Four young female members of the "Manson Family," with their heads shaved, kept a vigil throughout the trial in which Charles Manson and three women were convicted in 1971. Wally Fong/AP hide caption

Guinn says that oddly enough, Manson cribbed much of his sales pitch from a best-selling motivational book, which was a cornerstone of the era's polite society. "Every line he used, almost word for word, comes from a Dale Carnegie textbook in a class, How to Win Friends and Influence People," Guinn told All Things Considered in 2013.

Manson had learned Carnegie's guidelines in prison, Guinn says, and applied them in distorted fashion on the streets of San Francisco. Eventually, Manson took his following on the road, transforming it into a traveling commune in an old school bus. But all the while, through violence, emotional manipulation and the administration of the drug LSD, Manson sought to instill a belief in his followers that he was a messianic figure.

By the time Manson settled with his followers at the Spahn movie ranch northwest of Los Angeles, he had them firmly in thrall. 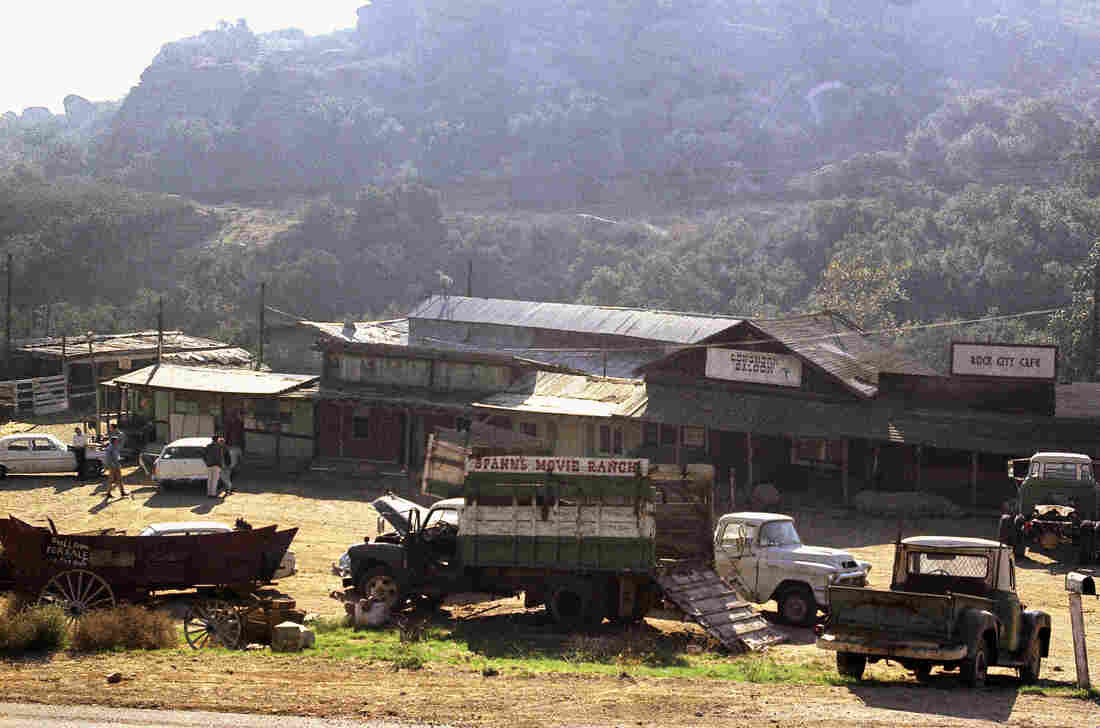 The Spahn movie ranch near Chatsworth, a Los Angeles suburb, in 1969, where Charles Manson and his "family" of followers lived at the time of the Tate-LaBianca killings. AP hide caption

It was there, in the isolation of the ranch, that Manson polished his apocalyptic theories of an approaching race war between white people and black people. Manson's cult was to wait out the war in the desert, returning only to lead the new world order after black people had won.

According to Bugliosi, who later prosecuted the case against Manson, the cult leader gleaned what he believed were clues in the biblical book of Revelation and the Beatles' self-titled 1968 album, which he would listen to on repeat at the ranch. In songs such as "Piggies," "Blackbird" and "Helter Skelter," Manson heard a prophecy of the race war to come.

All the while, Manson pursued an ill-fated music career of his own. Despite his acquaintance with Beach Boys drummer Dennis Wilson, Manson failed to achieve any measure of success in recording.

Things came to a head in the early morning of Aug. 9, 1969, just after midnight, when several of his followers descended on the home actress Sharon Tate shared with her husband, director Roman Polanski. There, they killed the actress, along with four others present at the home — including Abigail Folger, the daughter of Folger Coffee chairman Peter Folger, and Steve Parent, a clock radio salesman who had been visiting the house at the time.

They shot Parent and beat and stabbed the other victims to death. After the attack, they scrawled the word "pig" in blood on the front door.

The next night, members of the Family — this time under Manson's direct supervision — attacked the home of grocery store magnates Leno and Rosemary LaBianca, killing the couple and writing more messages in blood: "death to pigs" and "rise" on the wall, and on the refrigerator, "healter skelter" — a misspelling of the Beatles' song title.

The violence went unsolved for months, until a series of interlocking clues led investigators back to Manson. During the trial that followed, which began in 1970 and lasted for more than nine months, the prosecution unraveled what they found to be Manson's motive: to pin the murders on black people, and in so doing, accelerate the race war he envisioned would follow.

In 1972, when the California Supreme Court found the death penalty violated the state constitution, the death sentences for Manson and his followers were commuted to life in prison. And there he stayed for nearly a half-century. As recently as 2012, Manson was denied parole for the final time. His next parole hearing had been scheduled for 2027. 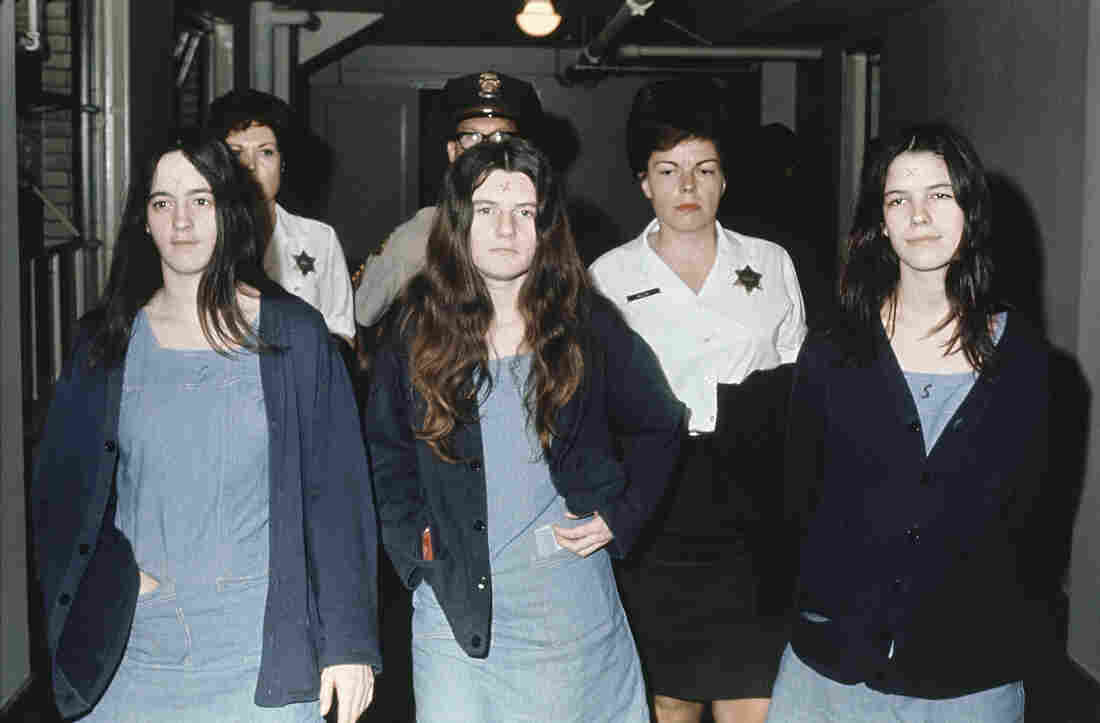 Susan Atkins (left), Patricia Krenwinkel and Leslie Van Houten, in 1971 as they return to court to hear the penalty ending a nine-month trial in the Tate-LaBianca murders. All three, plus Charles Manson, were sentenced to death — though those sentences were later commuted to life in prison. AP hide caption

Still, though Manson lived behind prison walls for decades, his name — and the violence for which it became shorthand — rarely strayed far from books, film and even music. How is it that the Manson Family murders have held such an enduring place in American lore?

For that answer, one might turn to Bugliosi, the prosecutor who helped put Manson away and who co-wrote the 1974 book Helter Skelter that inscribed Manson's legacy. Some years before Bugliosi's death in 2015, he told NPR why he thinks interest in Manson endured.

"I've often said that if these murders had never happened and someone had written a novel, with the same set of facts and circumstances, you'd probably put it down after a couple of pages," Bugliosi said. "Because to be good fiction, as I understand it — unless it's science fiction — it's got to be somewhat believable, and this is just too far out."

A previous version of this story incorrectly referred to the Beatles' song "Blackbird" as "Blackbirds."