Accessibility links
U.K. Water Companies Sometimes Use Dowsing Rods To Find Pipes : The Two-Way Biologist Sally Le Page couldn't believe it when she heard a folk magic practice was being used to look for water mains in 2017. But 10 out of 12 companies confirmed they sometimes rely on divining. 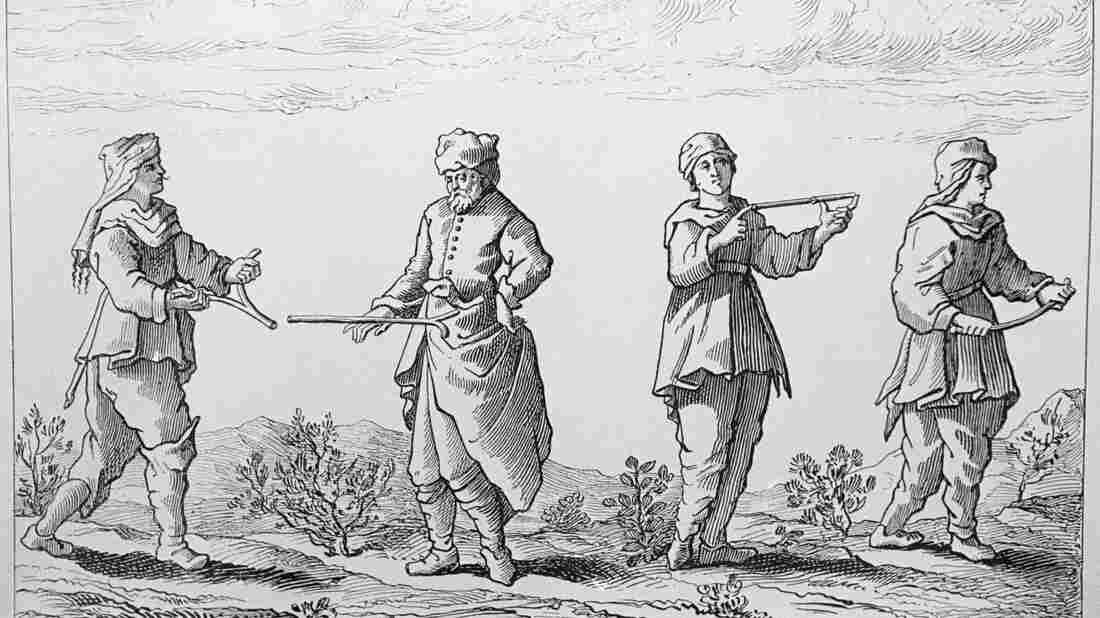 There are many different ways to hold a divining rod or dowsing rod. Some people prefer to "witch" for water with a pendulum. The practice relies on the idea that the object will suddenly move when a person passes over water. Traite De La Physique Occulte/Bettmann Archive hide caption 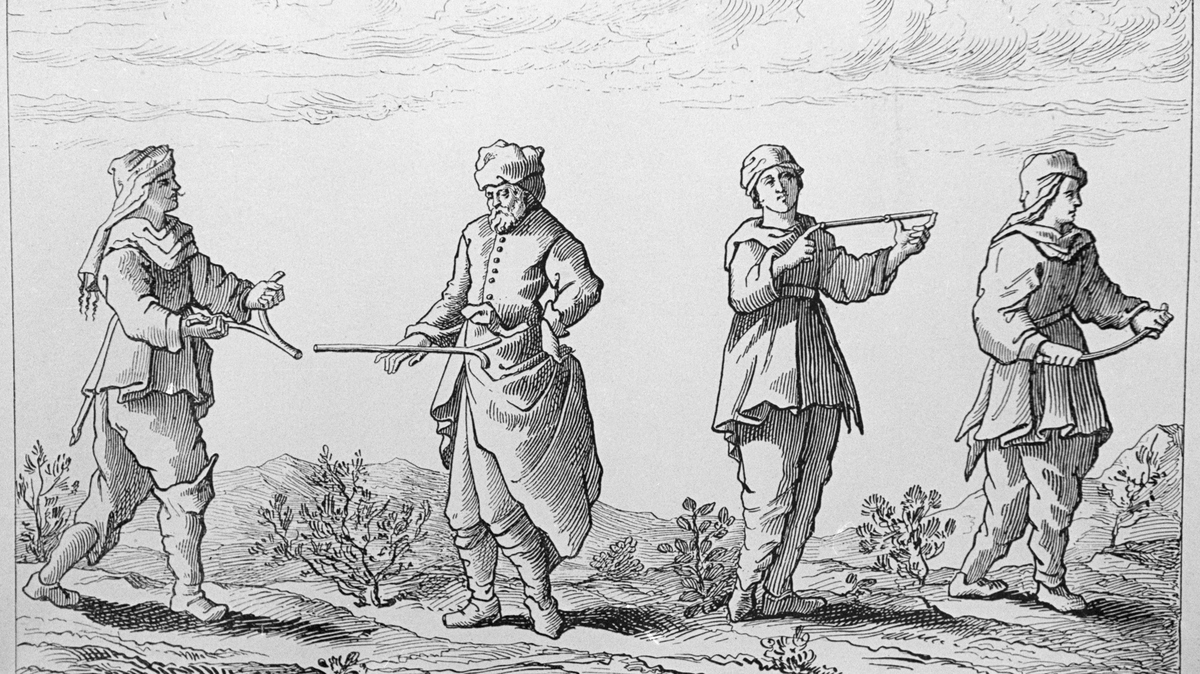 There are many different ways to hold a divining rod or dowsing rod. Some people prefer to "witch" for water with a pendulum. The practice relies on the idea that the object will suddenly move when a person passes over water.

Most of the major water companies in the United Kingdom use dowsing rods — a folk magic practice discredited by science — to find underwater pipes, according to an Oxford Ph.D. student and science video producer who accidentally discovered the practice is still in use.

Ten out of the U.K.'s 12 regional water and sewer utilities confirmed to Sally Le Page that they at least occasionally use dowsing rods, also known as divining rods or "witching sticks," to locate underground water sources. Many of the companies later emphasized that dowsing is done by individuals, not as a company-wide policy, and that it does not cost any money.

In their responses, which she posted on Medium, several companies emphasized that divining is not their primary or preferred method for locating water sources, and that they also have more modern tools. One company told Le Page that some technicians use dowsing rods "if they need to."Another company said "they are only used to detect pipework and voids that may be caused by bursts or collapses."

One water company, in a display of honesty, said technicians occasionally use divining rods to locate water mains — "however they are not accurate 100% of the time."

Hi @sallylepage, yes on occasions we use divining or dowsing rods to locate water mains however they are not accurate 100% of the time.

There is no evidence that divining, which relies on the spontaneous twitching of sticks held in human hands, can accurately detect anything beneath the ground.

"The disclosure has prompted calls for [water regulators] to stop companies passing the cost of a discredited medieval practice on to their customers," The Guardian writes.

Ofwat, the government body that regulates the U.K.'s privatized water companies, "said any firm failing to meet its commitments to customers faced a financial penalty," the newspaper reports.

The U.K. is hardly the only country where old-fashioned methods are being used to search for water. As NPR's Julie McCarthy reported last year, a drought in Indian sent desperate farmers to the local water diviner. And since she published her blog post. Le Page has collected reports of businesses around the world that continue to utilize dowsing. 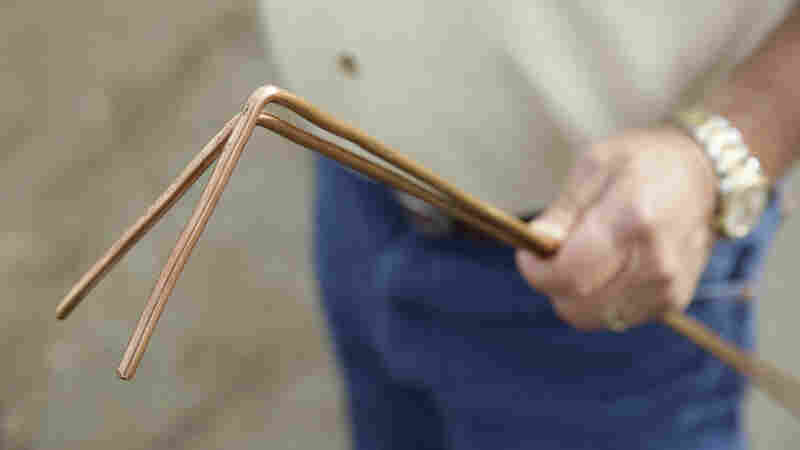 Marc Mondavi holds a pair of divining rods in 2014 at the Charles Krug winery in St. Helena, Calif. Also known as water witches, dowsers believe they can use use so-called divining rods made of copper or wood to find water deep underground. Eric Risberg/AP hide caption 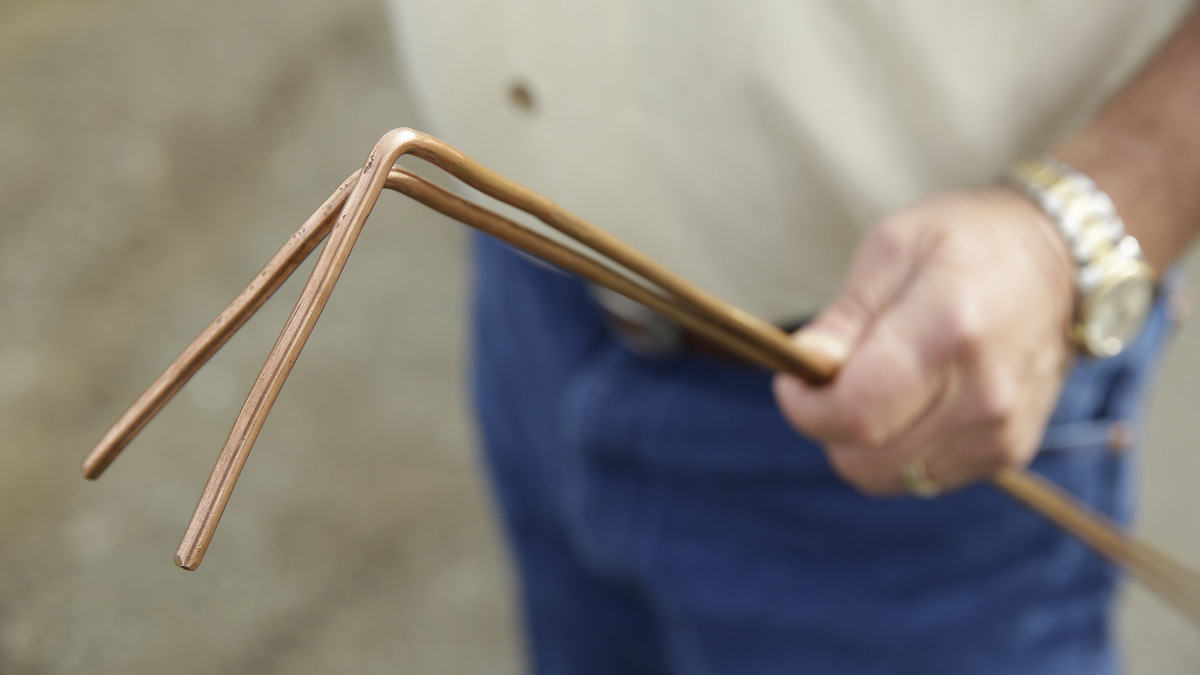 Marc Mondavi holds a pair of divining rods in 2014 at the Charles Krug winery in St. Helena, Calif. Also known as water witches, dowsers believe they can use use so-called divining rods made of copper or wood to find water deep underground.

In water divining, dowsers use two rods or a single forked stick to detect underground water sources. They believe that when they walk over a water source, the rods will spontaneously cross or the stick will suddenly jerk downward.

How does it work? The power is believed to come from the human dowser, not from the sticks, but as for how it works, "science doesn't have the answers," one dowser told Julie McCarthy. Believers say it's a mystery.

Skeptics say there's nothing mysterious about it at all — like a Ouija board, the rod moves in response to a human's small, unconscious movements.

Are Indians Turning To The 'Supernatural' In Subterranean Search For Water?

A double-blind test of dowsers' skills in the late '80s concluded that most dowsers could not find a hidden pipe, but that a handful of test subjects had "an extraordinarily high rate of success." However, an analysis of the results by a skeptical researcher found that the successful outliers only looked like outliers if you ignored all their incorrect answers — and that they could have done even better if they'd simply guessed that the pipe was always in the middle.

In the real world, of course, dowsers aren't doing double-blind tests. As the U.S. Geological Survey writes, most dowsers tell people where to dig to find water, without specifying how much or how deep.

The result? People dig, hit water, and declare the dowsing a success. But they don't consider that they might have done just as well picking randomly.

"In many areas water would be hard to miss," the USGS writes, in a tone that varies from polite exasperation to weariness. "The dowser commonly indicates that the spot indicated by the rod is the only one where water could be found, but that is not necessarily true ... Some water exists under the earth's surface almost everywhere."

Le Page, a biologist, writes in her blog post on her discovery:

"You could just laugh this off. Isn't it a bit silly that big companies are still using magic to do their jobs! Except if they get it wrong, that could mean the difference between an entire town having safe drinking water or not. If they use divining rods to decide that there isn't a pipe underneath and so it's safe to dig there, they could rupture the mains water supply for thousands of people. Not to mention the cost of sending out a "trained" technician to examine a site for several hours, only to get no valuable information. Money that comes from the UK homeowners who have no choice over which water company to use."

She notes that one water company, Anglian Water, doubled down and defended their use of divining rods.

"If you've ever tried to find a water pipe underground then you'll know that it can be very difficult you will try anything," the company wrote on Twitter. "We're happy to take you out and demonstrate, let us know and we can arrange. We'll even make a film and post it on our social channels putting both sides!"

The company later claimed it was trying to make the point that dowsing doesn't work, as the experiment would show. And Anglian Water did agree that crystal balls, animal entrails and tea leaves would be "silly" ways to try to find water mains.