Accessibility links
U.S. Denounces Violence Against Rohingya As 'Ethnic Cleansing' : The Two-Way "Those responsible for these atrocities must be held accountable," Secretary of State Rex Tillerson said in a statement Wednesday. Targeted sanctions against Myanmar are a possibility. 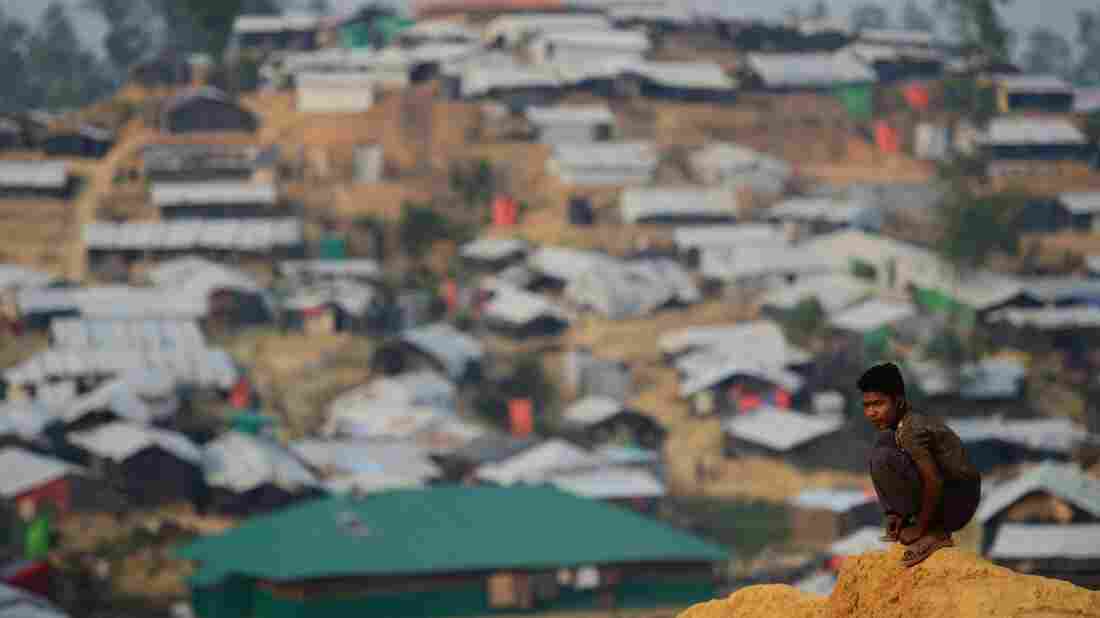 A Rohingya refugee boy looks on at Balukhali refugee camp in the Bangladeshi district of Ukhia on Wednesday. An estimated 618,000 Muslim Rohingya have fled mainly Buddhist Myanmar since a military crackdown was launched in Rakhine in August. Refugees describe a campaign of rape, murder and arson. Munir Uz Zaman/AFP/Getty Images hide caption 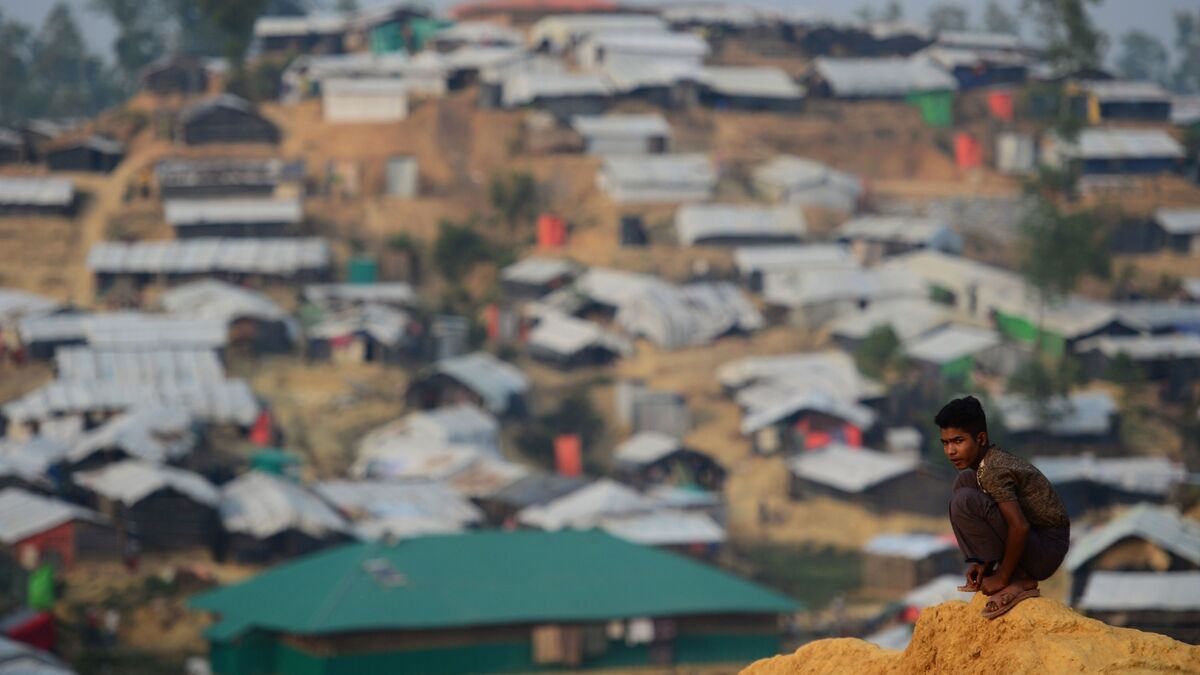 A Rohingya refugee boy looks on at Balukhali refugee camp in the Bangladeshi district of Ukhia on Wednesday. An estimated 618,000 Muslim Rohingya have fled mainly Buddhist Myanmar since a military crackdown was launched in Rakhine in August. Refugees describe a campaign of rape, murder and arson.

The wave of government-backed violence against the Rohingya minority in Myanmar amounts to "ethnic cleansing," the U.S. State Department says, in a statement that raised the possibility of targeted U.S. sanctions to put pressure on Myanmar's government.

For decades, the Muslim minority group has faced persecution in majority-Buddhist Myanmar, which does not even recognize them as citizens. In recent months, the level of violence against them has risen sharply. Hundreds of thousands of Rohingya have fled to Bangladesh, bringing with them horrific stories of executions, widespread arson and systematic rape.

In September, the United Nations said that Myanmar was blocking efforts to send in human rights investigators, but based on available information, "the situation seems a textbook example of ethnic cleansing."

PHOTOS: Intimate Pictures Capture The Pain Of The Rohingya

Secretary of State Rex Tillerson used the same phrase in a statement Wednesday.

"Activists say an ethnic cleansing finding is mostly symbolic, but could raise the pressure on the government of Myanmar," NPR's Michele Kelemen reports.

Cameron Hudson, who directs the genocide prevention program at the Holocaust Memorial Museum, tells Kelemen the statement is important, but "there's no obligation by the United States or any other state to take any kind of prescribed set of actions in response."

Hudson also says the situation in Myanmar may be even worse than the international community is acknowledging.

"Ethnic cleansing is the act of removing people from land that they have occupied, and genocide is their destruction," he says. "What we found in the field work that we did over the course of the past year is that there is certainly mounting evidence to suggest that this is genocide." But it's difficult, and dangerous, to gather that evidence.

Based on the available information, Tillerson says that those responsible for atrocities in Myanmar must be held accountable. He noted that Myanmar (also known as Burma) only recently began transitioning to democracy, after years of military rule.

"The key test of any democracy is how it treats its most vulnerable and marginalized populations, such as the ethnic Rohingya and other minority populations. Burma's government and security forces must respect the human rights of all persons within its borders, and hold accountable those who fail to do so," Tillerson said.

Myanmar's military says the violence is a response to attacks by Rohingya militants in Rakhine State. As Michael Sullivan has reported for NPR, innocent civilians have paid the price for the militants' actions.

The U.S. has previously condemned those militant attacks, and while Tillerson repeated that stance, he said that "no provocation can justify the horrendous atrocities that have ensued."

"After a careful and thorough analysis of available facts, it is clear that the situation in northern Rakhine state constitutes ethnic cleansing against the Rohingya. Those responsible for these atrocities must be held accountable," he said.

He called for an independent investigation as well as action from the United Nations and raised the possibility of U.S. sanctions.

Michael Sullivan has reported for NPR on the atrocities described by Rohingya refugees — including systematic rape by military forces and children shot and killed by soldiers.

"The Myanmar military continues to deny the systematic attacks against the Rohingya — despite the testimony of dozens of witnesses, satellite photos showing hundreds of homes burned to the ground and disturbing videos uploaded to YouTube that show the military rounding up and beating Rohingya men," Sullivan reported in April.

The crisis has only intensified since then. After attacks by Rohingya militants in August, the violence against Rohingya civilians worsened.

This October, Sullivan described a "wave of rape, murder and arson, entire villages torched by security forces and Buddhist vigilantes."

Two weeks ago The New York Times reported the story of a woman who says soldiers threw her baby son into a fire before they gang-raped her.

The atrocities are unfolding under the watch of a leader who is a noted human rights activist. "Aung San Suu Kyi, the 1991 Nobel Peace Prize winner for her long struggle for democracy in Myanmar, does not control the military apparatus of the country," NPR's Colin Dwyer wrote. "But many in the international community expected her to speak out publicly against the violence that had captured the world's attention."

Instead, she has largely stayed silent, and her few comments on the issue have been criticized as misleading.

More than half a million Rohingya fled to neighboring Bangladesh in less than two months, the U.N. says.

"Bangladesh reckons about 800,000 Rohingya are now living on its side of the border," Sullivan reported last month. "Most are in overcrowded, spontaneously erected camps, staying in shelters that amount to little more than bamboo poles strapped together with a bit of plastic sheeting for a roof," he says.

It's prompting political tensions and economic resentment, on top of the enormous logistical challenges. Human rights watchers are raising questions about education and health care for the massive tide of refugees, but Bangladesh is struggling just to house them at all.

"The reality today is more urgent for both Bangladesh and its humanitarian aid partners: simply finding enough food, water and adequate sanitation for the new arrivals," Sullivan reports. "How they're treated once that's sorted out is another matter. And Bangladesh is the only country that has taken the Rohingya in. Nobody else has offered to share that burden."