Accessibility links
'I Don't Believe In Science,' Says Flat-Earther Set To Launch Himself In Own Rocket : The Two-Way "Mad" Mike Hughes plans to take the rocket built from salvaged metal on a flight across the Mojave Desert on Saturday. His stated mission: to overturn two millennia of scientific understanding. 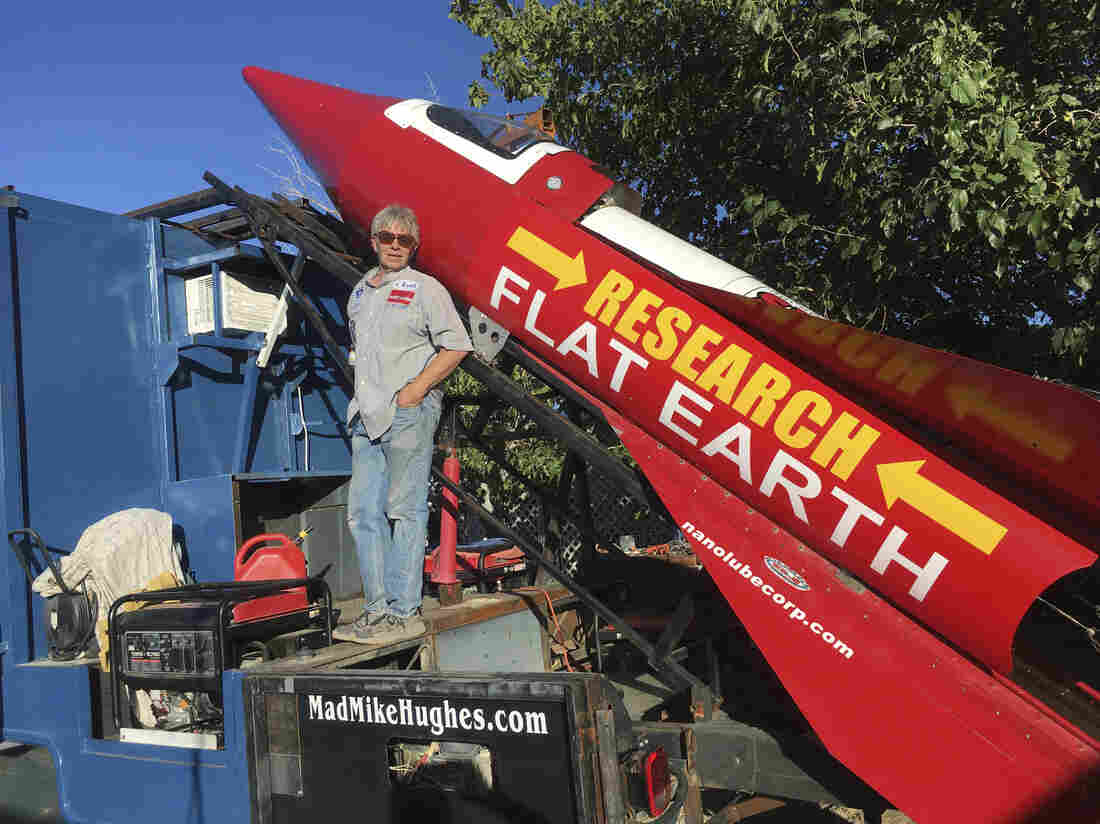 In this photograph taken Nov. 15, Mike Hughes stands beside his steam-powered rocket, which he built from salvaged parts. Waldo Stakes/HO courtesy of Mad Mike Hughes via AP hide caption 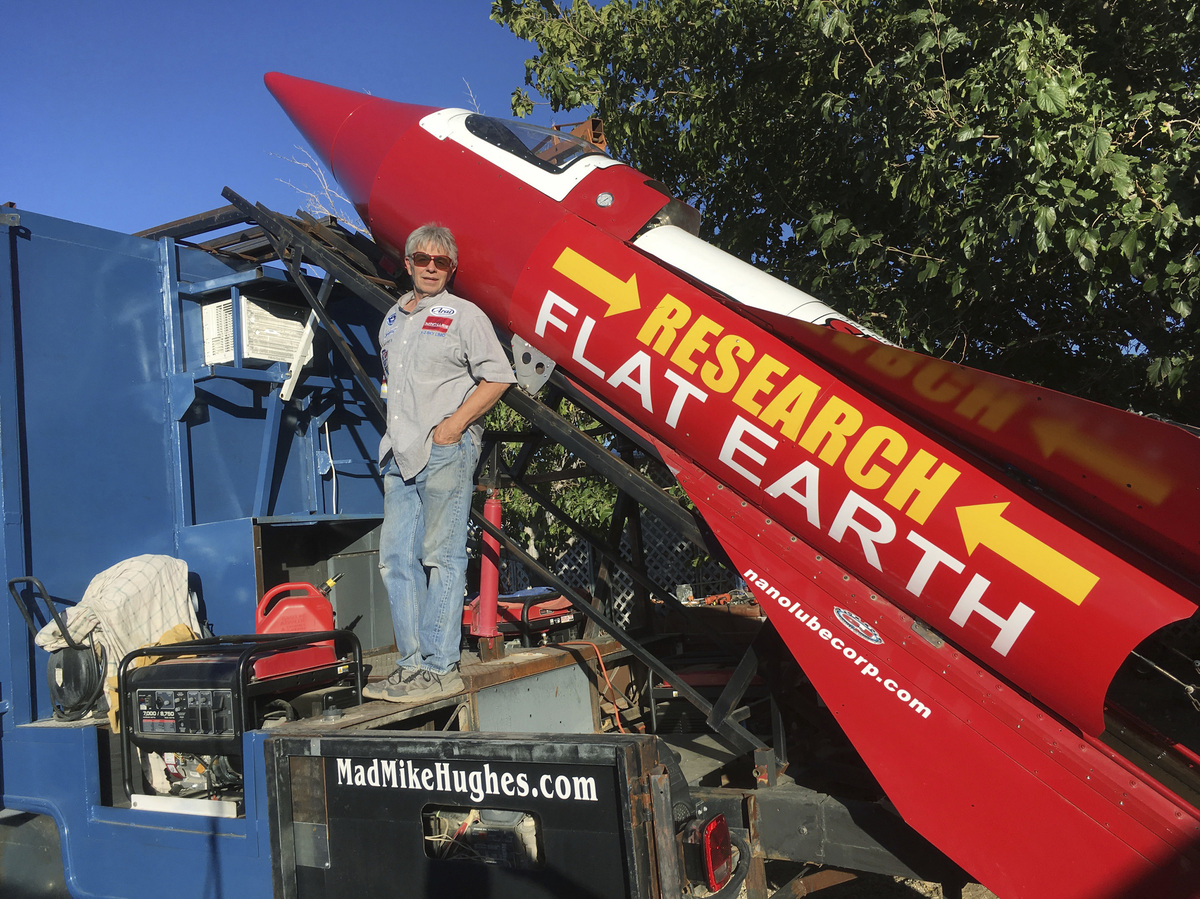 In this photograph taken Nov. 15, Mike Hughes stands beside his steam-powered rocket, which he built from salvaged parts.

On Saturday, a limousine driver plans to launch himself on a mile-long flight over the Mojave Desert in a rocket of his own making.

His name is "Mad" Mike Hughes, his steam-powered rocket is built of salvaged metals, his launch pad is repurposed from a used mobile home — and he is confident this will mark the first step toward proving the Earth is flat, after all.

"It's the most interesting story in the world," Hughes told The Associated Press of his jury-rigged quest to overturn more than two millennia of scientific knowledge. And the whole thing is costing him just $20,000, according to the AP. (It goes without saying, but we'll say this anyway: Do not try this at home — or anywhere.)

"I don't believe in science," Hughes added. "I know about aerodynamics and fluid dynamics and how things move through the air, about the certain size of rocket nozzles, and thrust. But that's not science, that's just a formula. There's no difference between science and science fiction."

Neil DeGrasse Tyson Gets Into A Rap Battle With B.o.B Over Flat Earth Theory

The plan, as stated, is to send himself 1,800 feet high in the air at a speed of 500 mph before finally pulling out his parachutes — which, one hopes, will not be the same ones he used for another launch in 2014. Hughes, 61, told a flat-Earth community Web show that the flight, which the AP said took him a quarter-mile across Arizona desert, ended when he pulled his parachutes — two of which he said were at least 20 years old at the time and one of which didn't open.

"Yeah, it was a scary moment," he said in the interview, adding that he had to use a walker for several weeks after his landing. "I had never parachuted before."

It was not his first time tinkering with a big hunk of metal, however. Though Hughes may drive limousines for a living, he says he has worked in NASCAR pit crews, and The Washington Post reports he "has been building rockets for years."

Just don't liken the man's entrepreneurial spirit to that of Elon Musk, who "is a giant fraud," according to Hughes. In fact, many notable space explorers came in for Hughes' criticism during the interview, including the "Freemason" NASA astronauts John Glenn and Neil Armstrong. Hughes maintained that all of them have been involved in "the roots of the deception" that the Earth is round.

Now, it must be noted that humans knew the world was round long, long before NASA launched astronauts into space and we saw pictures of our spherical planet from afar. As the BBC points out, Aristotle — a Greek man with no known connections to NASA or Freemasonry — explained how we know back around 350 B.C.:

"Again, our observations of the stars make it evident, not only that the Earth is circular, but also that it is a circle of no great size. For quite a small change of position to south or north causes a manifest alteration of the horizon."

Other famed explorers who have circumnavigated the globe, such as Ferdinand Magellan and Sir Francis Drake, also failed to report observing the sea ice that many flat-Earthers believe marks the ends of our earthly disc.

Still, Hughes converted to the flat-Earth belief recently, shortly after his first fundraising campaign for the rocket earned just $310 of its $150,000 goal. His second campaign, this time posted after his conversion and with the support of the flat-Earth community, succeeded in hitting its $7,875 goal.

"I've been a believer for maybe almost a year. I researched it for several months in between doing everything else — you know, I've still got to make a living and all that kind of stuff, and building this rocket actually eats up a lot of my time," he told the flat-Earth Web show. "But when I'm not doing that, I research things."

And Hughes intends that research to continue well beyond Saturday's launch, which he says he will be streaming online. He envisions the launch as just one step toward eventually getting himself into space, at which point he plans to take a photograph "to prove once and for all this Earth is flat," he told his interviewer.

"This is the king of the deceptions," Hughes said. "Once this domino falls, this is it."